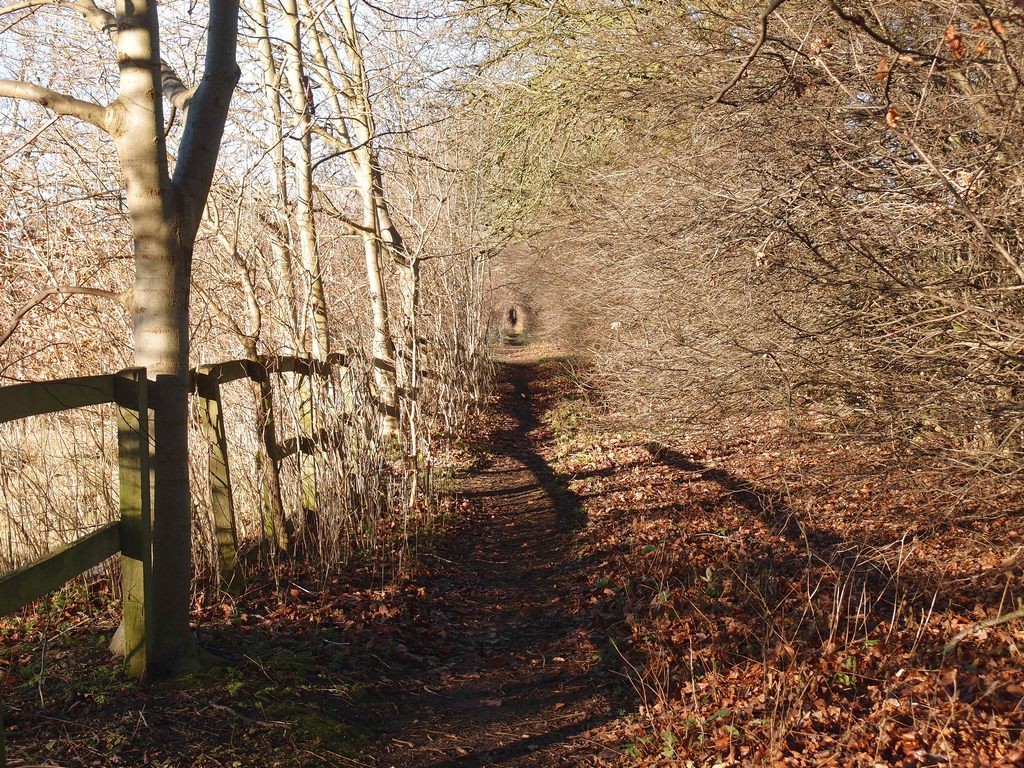 It appears to be time for a review of the year, and in fact I probably should have published it some days ago … to give enough time for anyone who’s interested to find it and read it. Do people read reviews of the year after 31 December? I hope so.

Having looked back at the year’s pages, and through photos I’ve taken, I wanted to include some images not yet included, and follow up on a few things mentioned in past months that are due an update.

The year started with the news that the old Groves Chapel might become a Co-op. Indeed it did (see below). I was concerned about trees that might be felled. Thankfully they weren’t. I also focused on several buildings in and around Marygate, including the Post Office Social club. 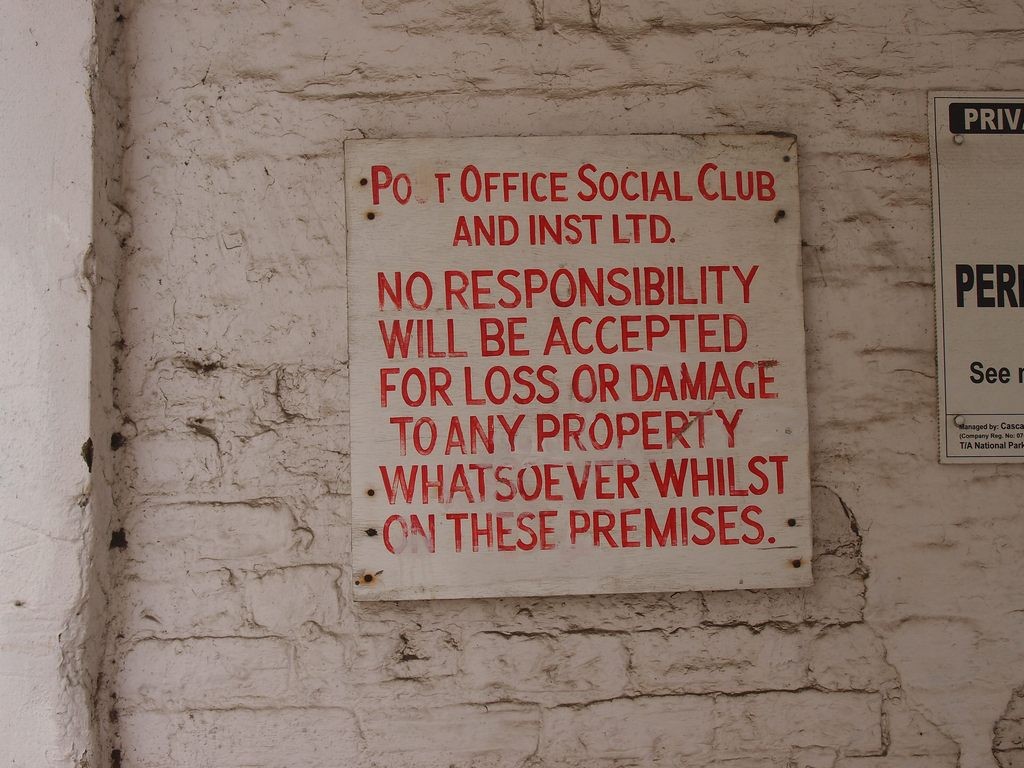 Just across the road from there I had a late winter wander around the recently established edible wood, behind the art gallery. And in early spring, went on a wider wander looking for interesting things. A couple of images of the church of St Mary, Bishophill, were included, of spring light through its windows and on its handsome open door.

Inside the church I also took photos of the box where food could be donated for the local foodbank. 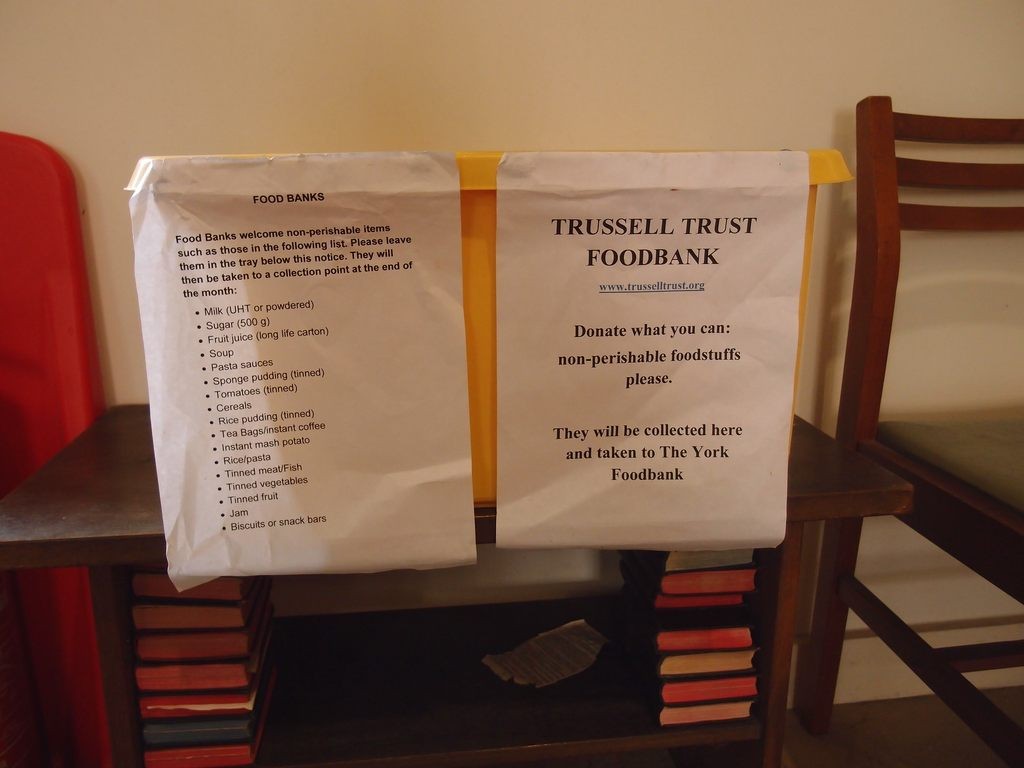 It speaks for itself, this photo, I think.

We all need groceries, and since April this year, as discussed at the time, the new Co-op in the refurbished Groves Chapel has offered a welcome alternative to the usual Sainsbury’s/Spar shops in this part of town. 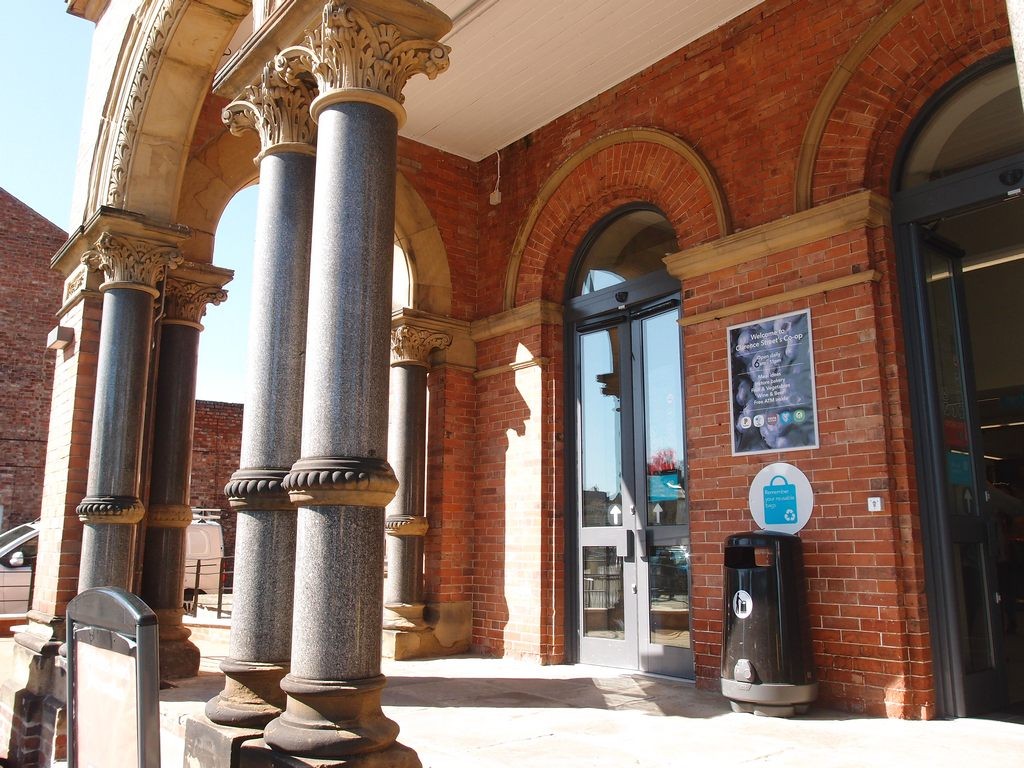 May’s page focused on fountains, one on Parliament Street and another on Museum Street.

Also in May, out on Bootham Stray … 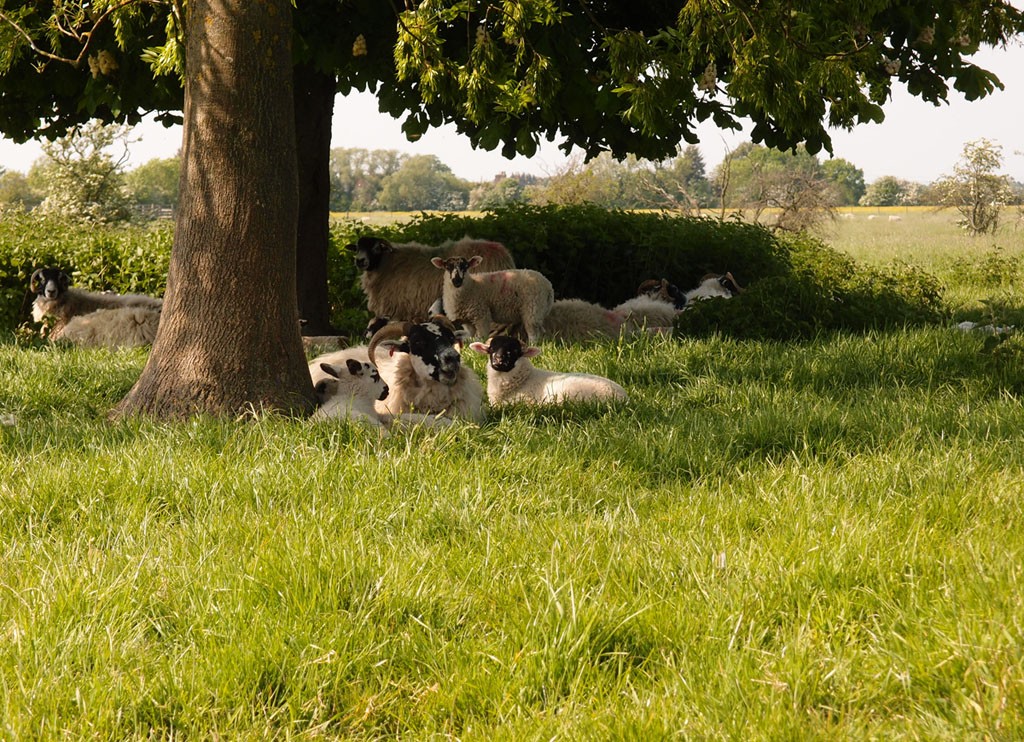 Rather a surprise, a very pleasant one, to find sheep and lambs on the stray, something I’ve not noticed before. All calm and comfy, under the green and leafy trees.

Back towards the city centre, in June. To a skyline where cranes loom over the valuable city centre land so many want to build on and profit from. 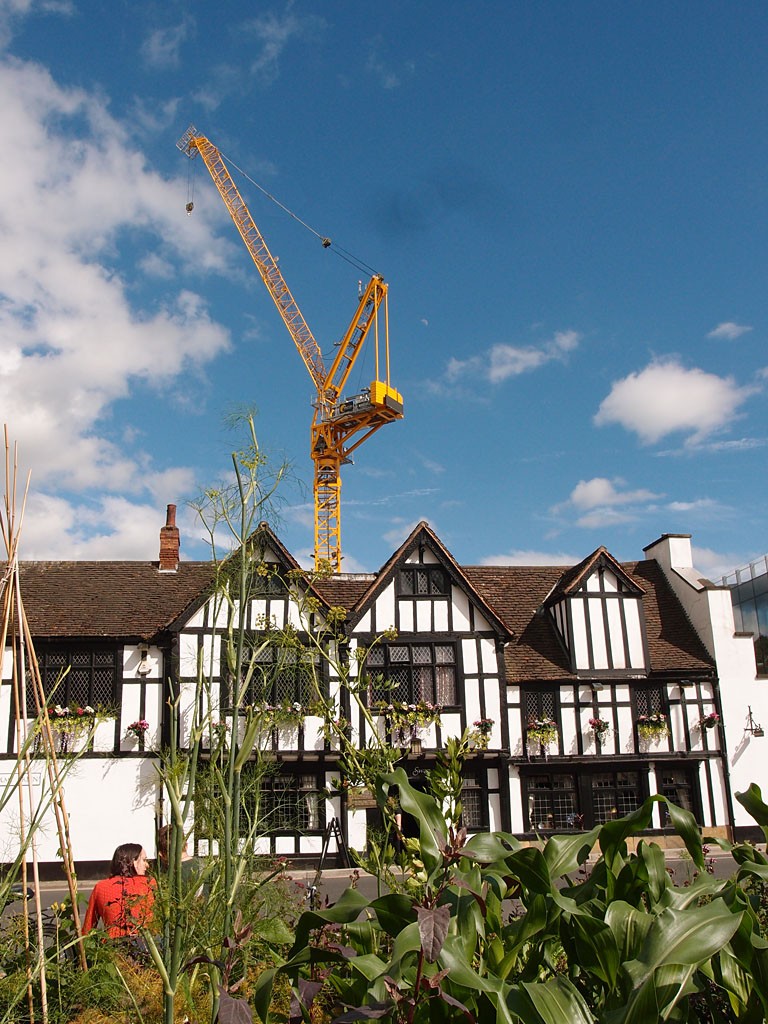 The historic Black Swan inn on Peasholme Green, with a building site behind it, on one edge of the Hungate area development, with a Moxy hotel being built. Across the road from it, closer to us, a couple sitting in the sun on one edge of a raised bed that has for some years now been one of the Edible York veg beds. Peasholme Green is green again, at least in this bit. As a sign explained … 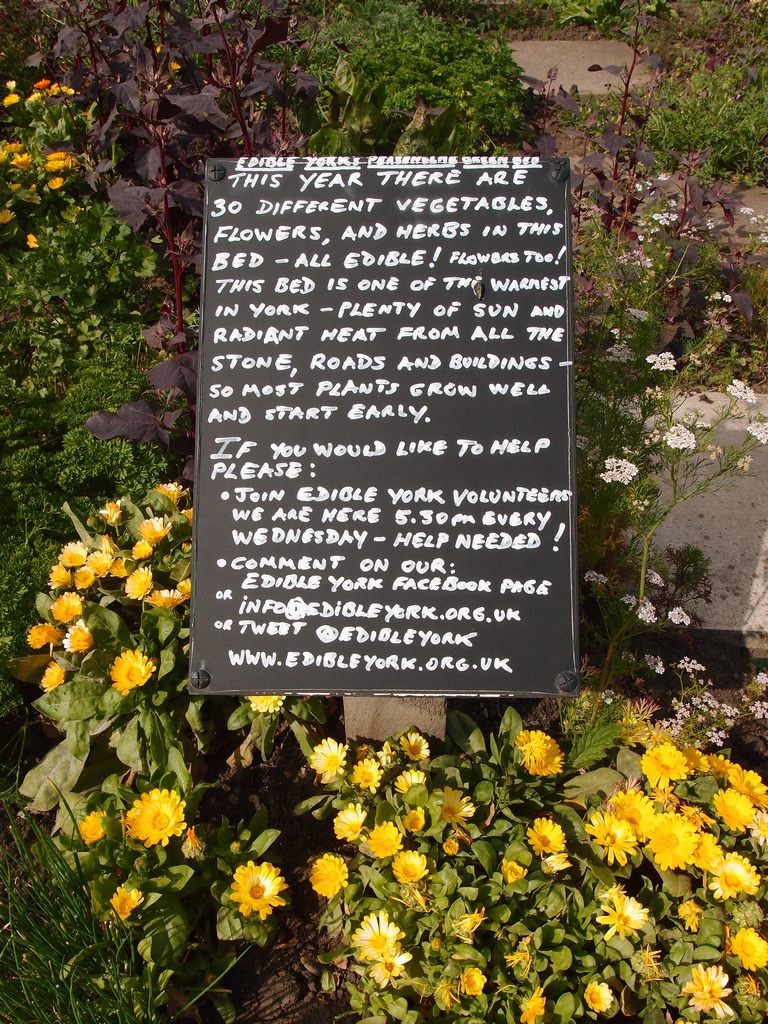 The city fills up with huge hotels and unaffordable apartments and the cranes dot the sky as outside investors buy up bits of it and build their hotels and apartments as high as they can, to make maximum profit from the bits of land available. I’ve found it preferable to focus as much as possible on the good things growing from the ground up, smaller, local. Like the Edible York veg beds, or the creativity of Bloom York — as covered back in July. Here’s a reminder: 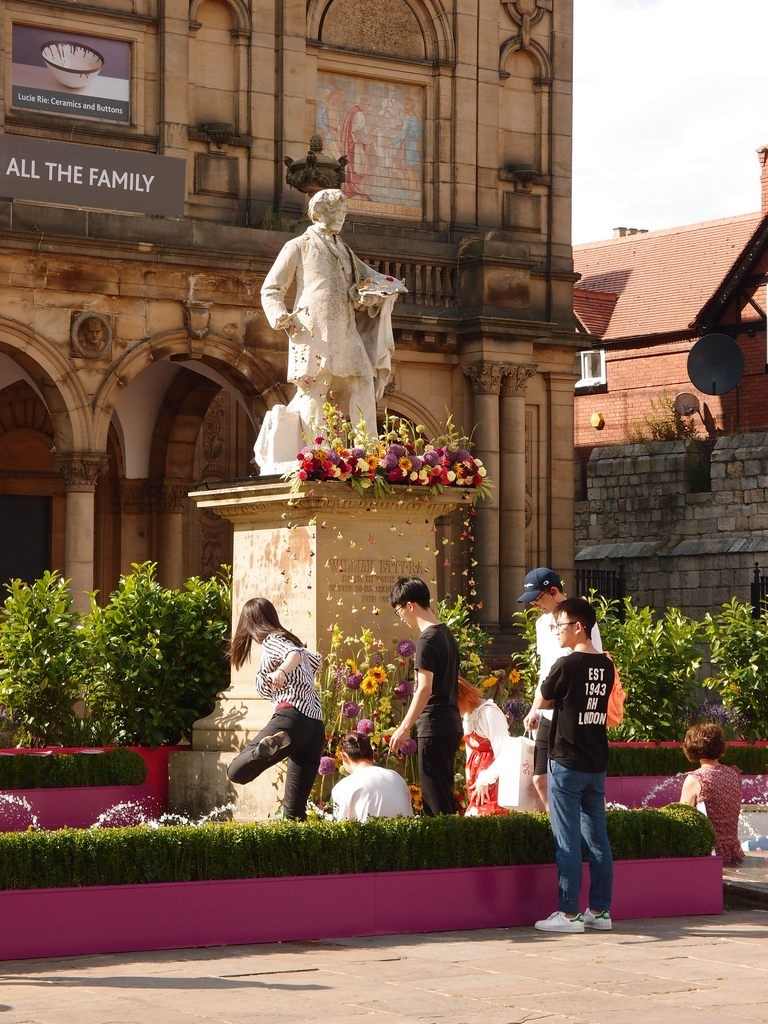 In August I had a proper look at Stonebow House (again), and specifically its redevelopment, all that new glass, the remodeling and the reflections. An important change, in the general gentrifying of York.

Still, some views stayed much the same. 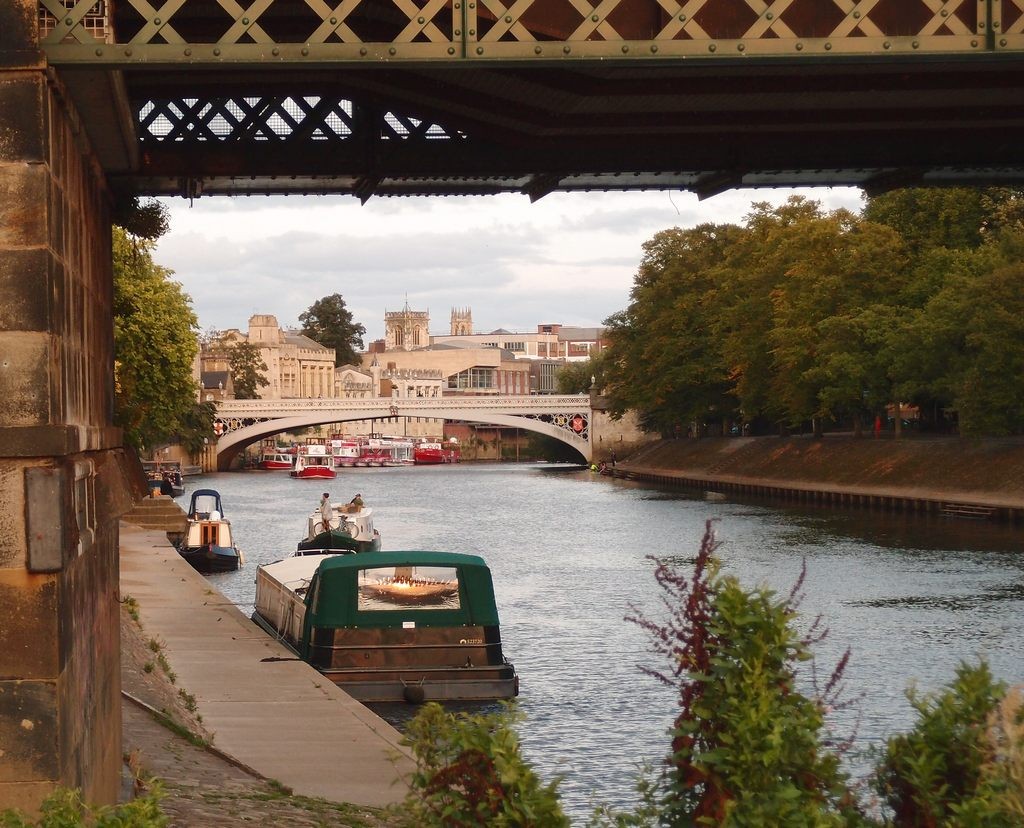 A particularly pleasing bit of local news came in late August. I didn’t cover it at the time, but was delighted to see this on the planning portal, on the Carlton Tavern planning application. 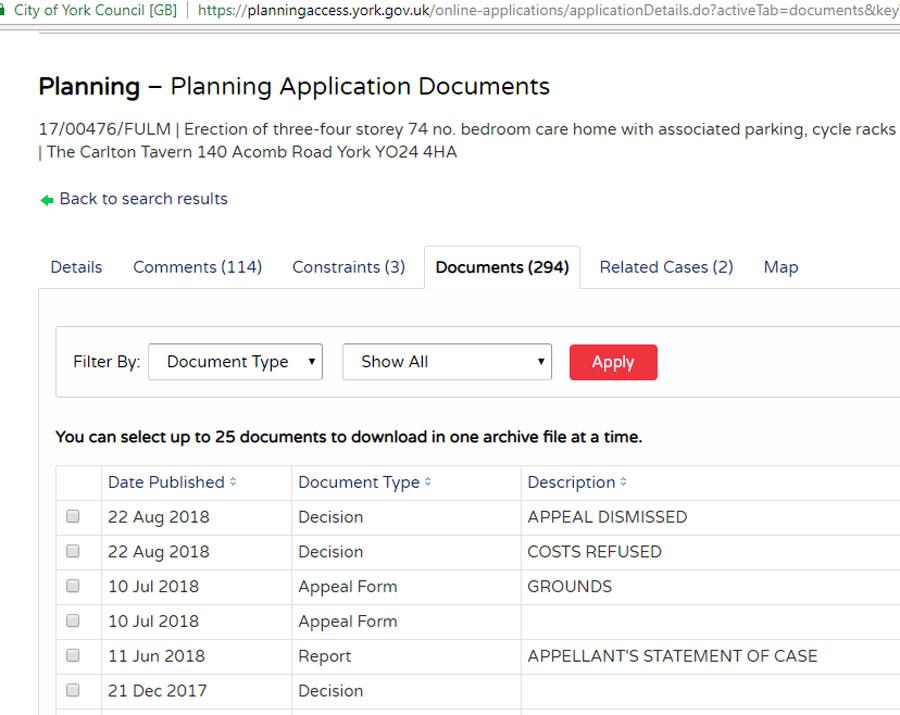 I’d always been led to believe that when a developer appeals against a planning decision the developer invariably wins. When I saw that there was an appeal by Crown Care against the Carlton Tavern decision, I assumed that they’d win the appeal, and be able to go ahead with demolition. But no. So presumably that’s the end of it, that long-running and rather complicated saga, which I wrote about a few times. Well done to everyone who campaigned against the proposed demolition.

In September, the first plans for the redevelopment of the football ground went on show, and I wrote about that at some length. I also went for a walk in Homestead Park, watched the Mystery Plays, and through September and October covered a few other local sites including Bootham Park and Duncombe Barracks.

Back to the flowers, and a quiet moment in Dean’s Park, in September. 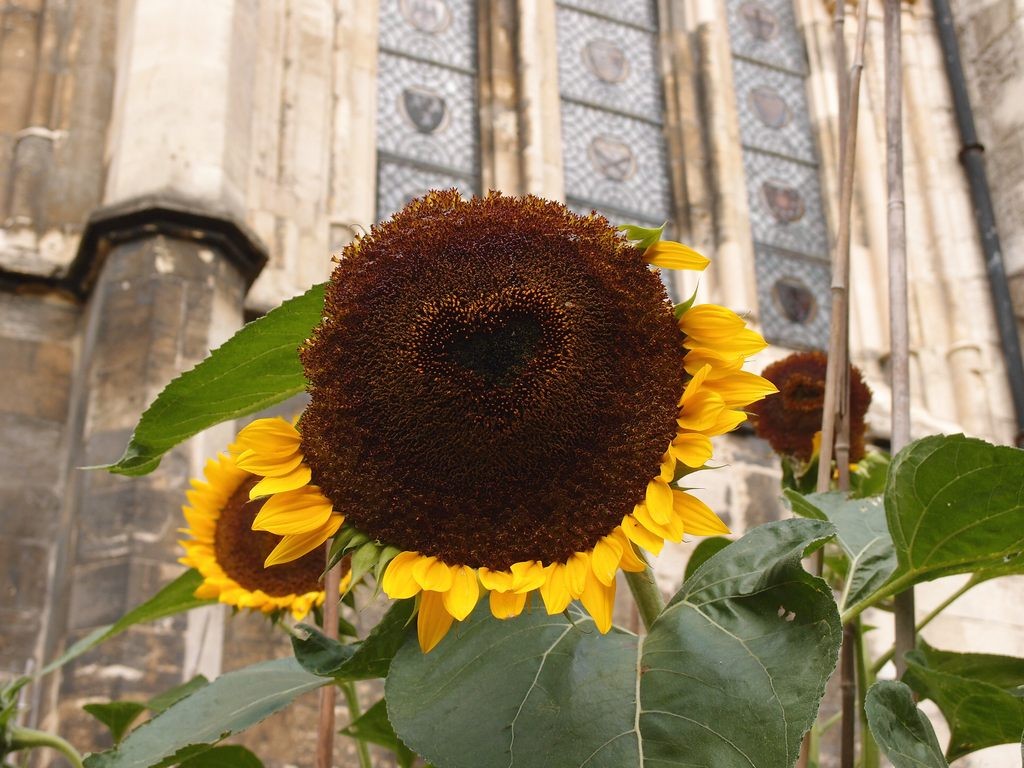 There were quite a few sunflowers, in raised beds by the Minster Library. This one had a distinctive heart shape in its centre.

It was a lovely hot proper summer. In celebration of that, let’s stay with the flowers. 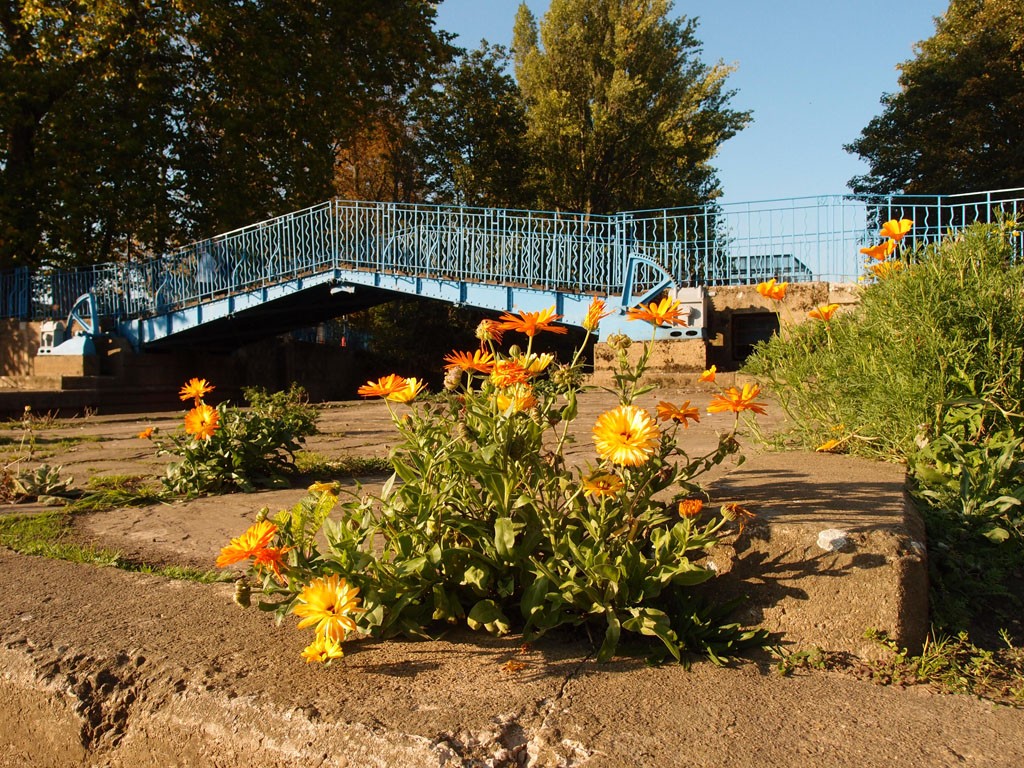 Warm days in autumn too. On 10 October I wandered towards the city centre and beyond it, and sat for a while by the Blue Bridge, in warm sunshine, admiring again the patch of flowers planted here, and in particular the ones that had escaped into the cracks in the nearby stonework, where they were happily blooming.

I’ve been keeping an eye on happenings and changes on Piccadilly, where the conversion of the old Ryedale House office block to residential is underway. Its vast bulk was covered when I walked past in October. 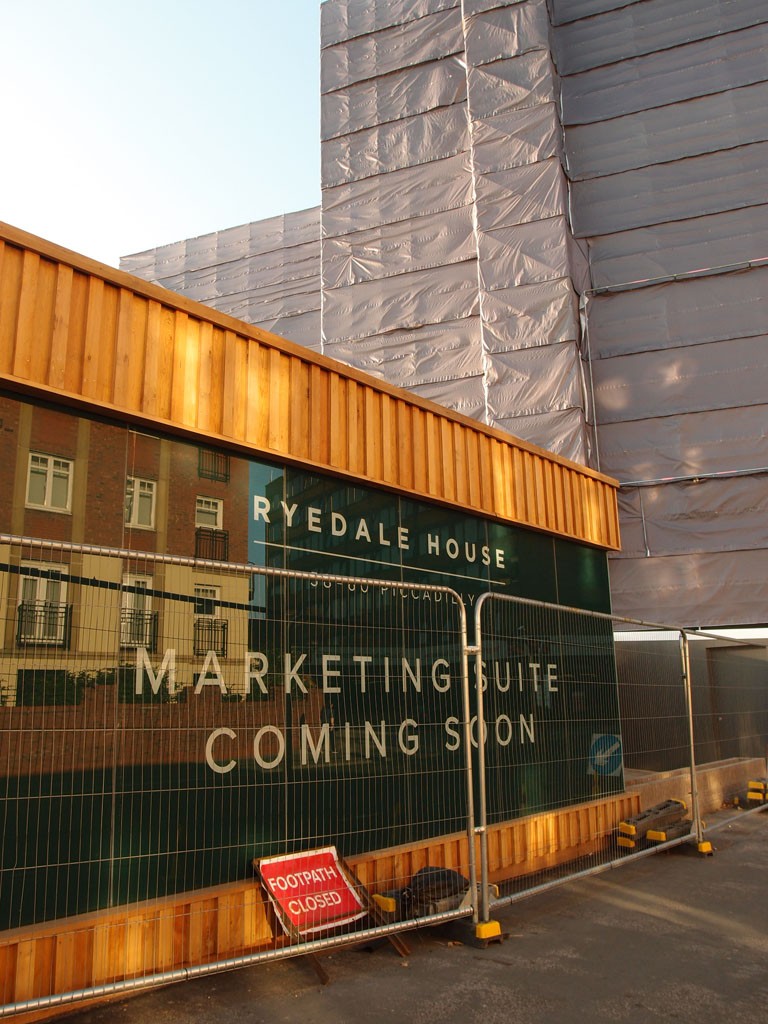 There are other planning applications going through the system at present for the sites alongside it, so a revisit to Piccadilly may be a good idea at some point.

In November I wrote about the demolition of Hudson House, and the history of the site. But of course, in November 2018, I was also thinking about the past, about Remembrance, about November 1918.  On 11 November I went into the city centre to spend a few quiet moments among the poppies. 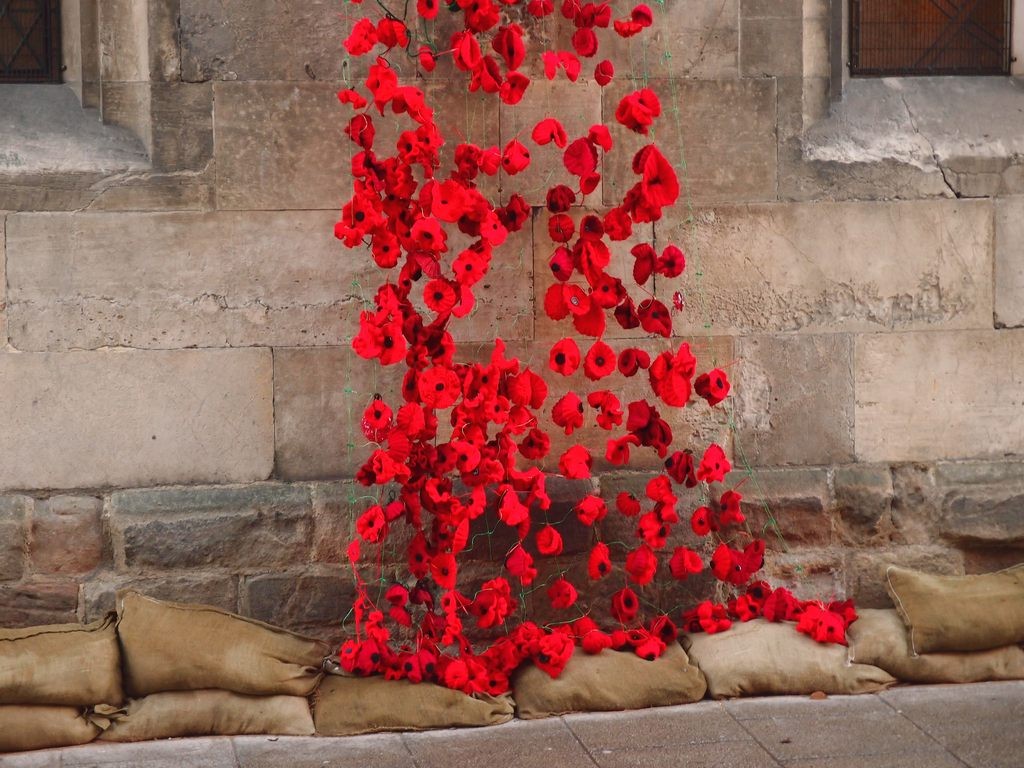 I’d read about the poppies on the church of All Saints, Pavement, and seen photos. The photos didn’t really capture what it was like seeing them for real, and my photo above doesn’t do them justice either. I headed up High Ousegate, towards the side of the church, from the Spurriergate end, late in the afternoon. The sun was low, but still bright. The red poppies, cascading down, held so many shades of red, and seemed to glow. I thought it was the way the sunlight illuminated them. Staring long enough, I realised that it wasn’t just that, but that the depth of colour was because of the way the many contributors had interpreted ‘poppy red’. These carefully crafted beautiful things were a range of reds, and when all brought together were a rainbow of red. It wouldn’t have been the same if everyone had gone off with exactly the same yarn to make a poppy. There’s some kind of message in that, perhaps.

We need to move on to December, but let’s do that via another photo taken on 11 November, on my way back home. Late light on the Minster, from Exhibition Square. Despite the many times of horror and trauma in our lives in the muck and mud down here we’ve always managed to build light-catching things that reach for the sky, in our many and multi-skilled ways. 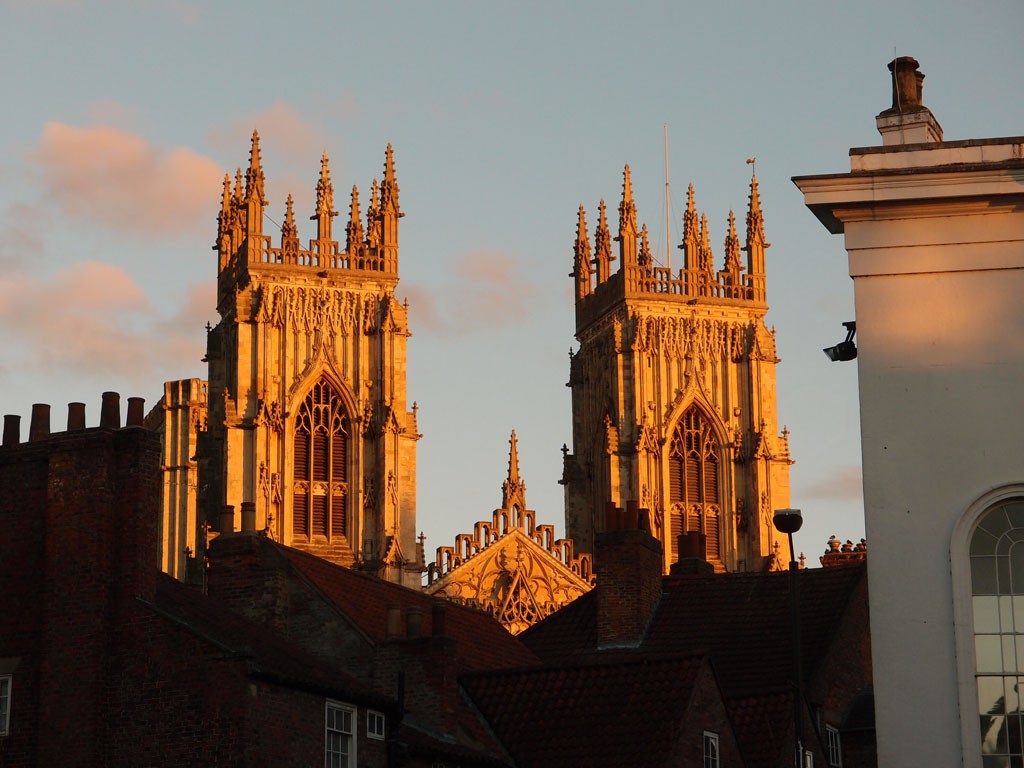 In December, this month, I wrote about Queen Street bridge, about Scarborough Bridge, and work on the new mental health facility on Haxby Road.

Not written about yet, but also noticed this month, is the work on the site of the old fire station on Clifford Street, which incorporates the front of the former chapel on Peckitt Street. 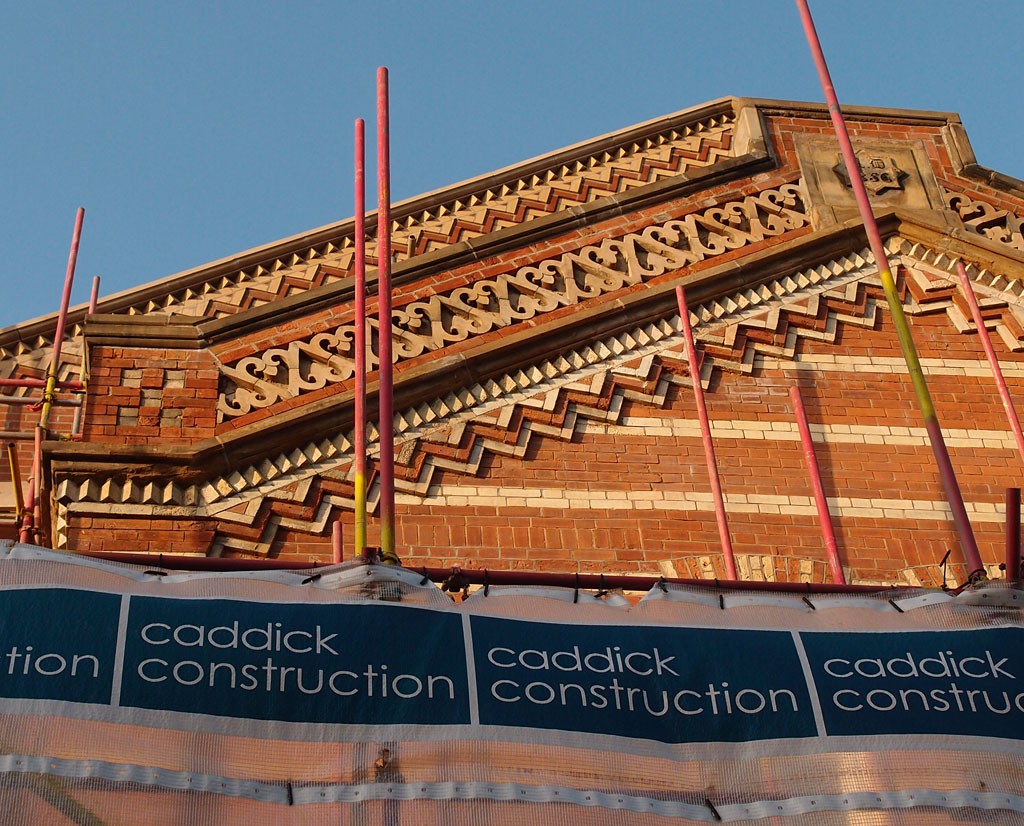 The old chapel incorporated some fancy detailing, which the new build behind it has copied, in part. More later perhaps.

From fancy detailing, to … 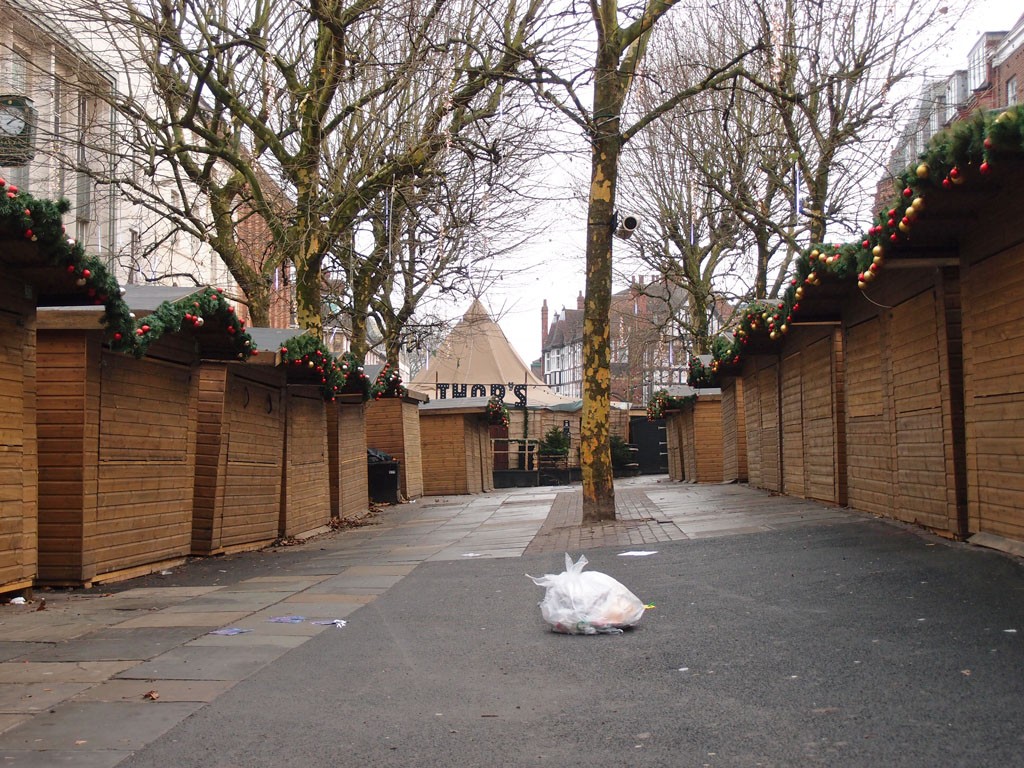 … sheds. But not just any old sheds. York’s Christmas market. On Christmas Day it was of course closed, but has apparently been very busy this year. On the lumpy bumpiness and strange slopes of Parliament Street the Christmas sheds and the Thor’s tent huddled wonkily together, below the Marks and Spencer’s clock and the plane trees.

In a place where so much money had been spent, in the run-up to Christmas, I found this official sign to be a rather jarring juxtaposition. 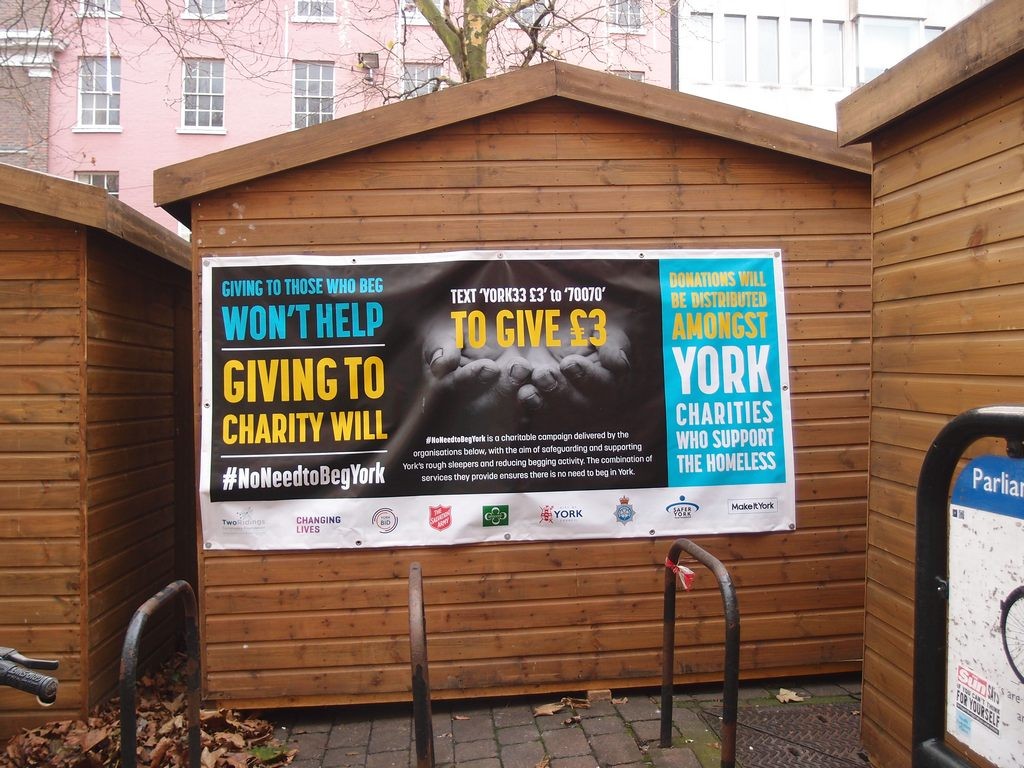 Coney Street was quiet, which was good, as it meant I could take photos and stand and look at it properly, as I’ve been meaning to do for some time and couldn’t have contemplated doing on a normal busy shopping day. 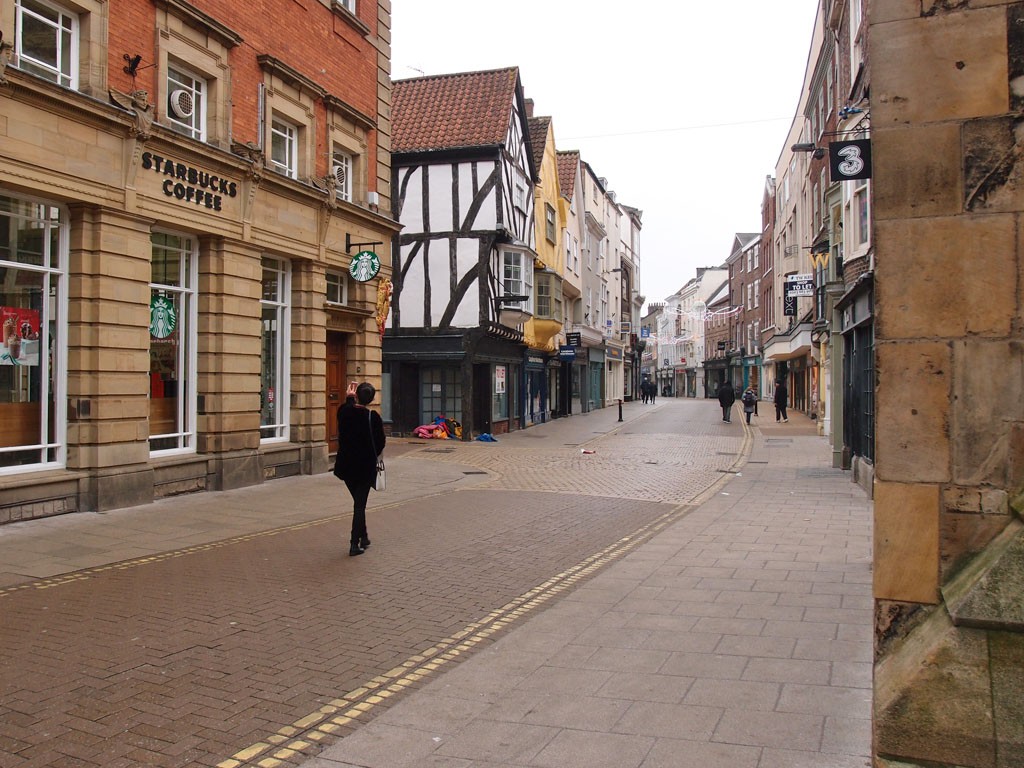 Change here, as everywhere. And perhaps more on that later.

For now, I’d just like to say thanks to you dear readers for your interesting comments, local insights, thoughtful emails, and virtual coffees throughout the year.

This resident’s record of York and its changes continues to try to present a personal angle on this city and its development. Thanks to everyone who has supported it over the course of the year(s). If you’d like to support York Stories, your virtual coffees help with that, thank you.