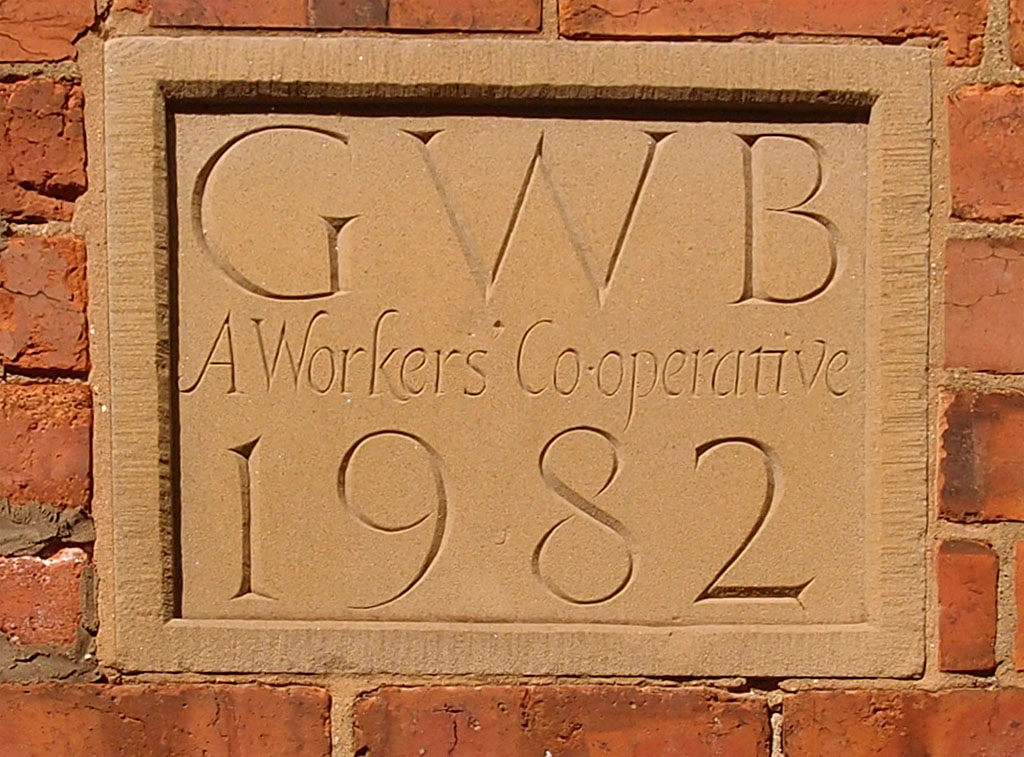 I often walk through Miller’s Yard, Gillygate, taking a short cut from that street into Bootham Row car park and then to Sainsbury’s on Bootham. I rarely go the other way, and when I do I’m usually in a hurry. Wandering through there recently, when I wasn’t in such a hurry, I stopped to read the posters in a window and then noticed Tom Mason’s bench.

And then remembered sitting here with my sister, decades back, sitting at tables outside — wooden benches like the type in pub beer gardens, as in the Exhibition pub, just across the yard — having lunch, and drinking tea. And sparrows, I remember sparrows on the ground around the tables, looking for crumbs. Funny the details you remember. 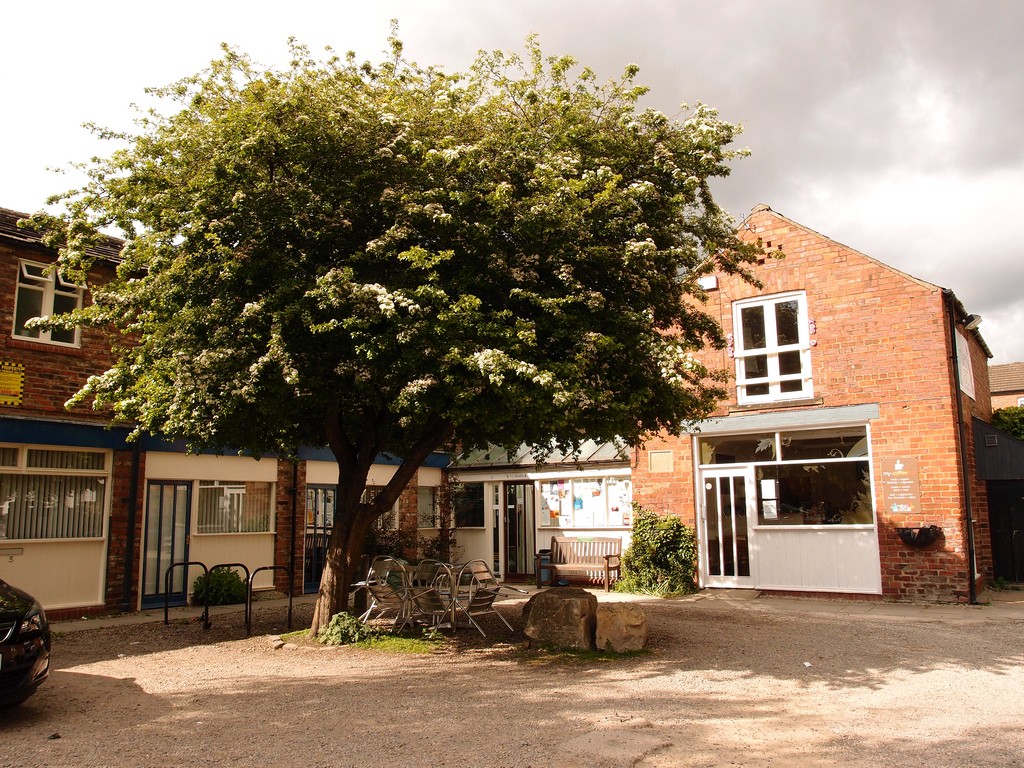 When did it close? I can’t remember. But when I went back to take the photos for this page I discovered that the year of its opening is there, carved in stone. I don’t recall noticing this before either. Proudly proclaiming the establishment of this Workers’ Co-operative, in 1982. 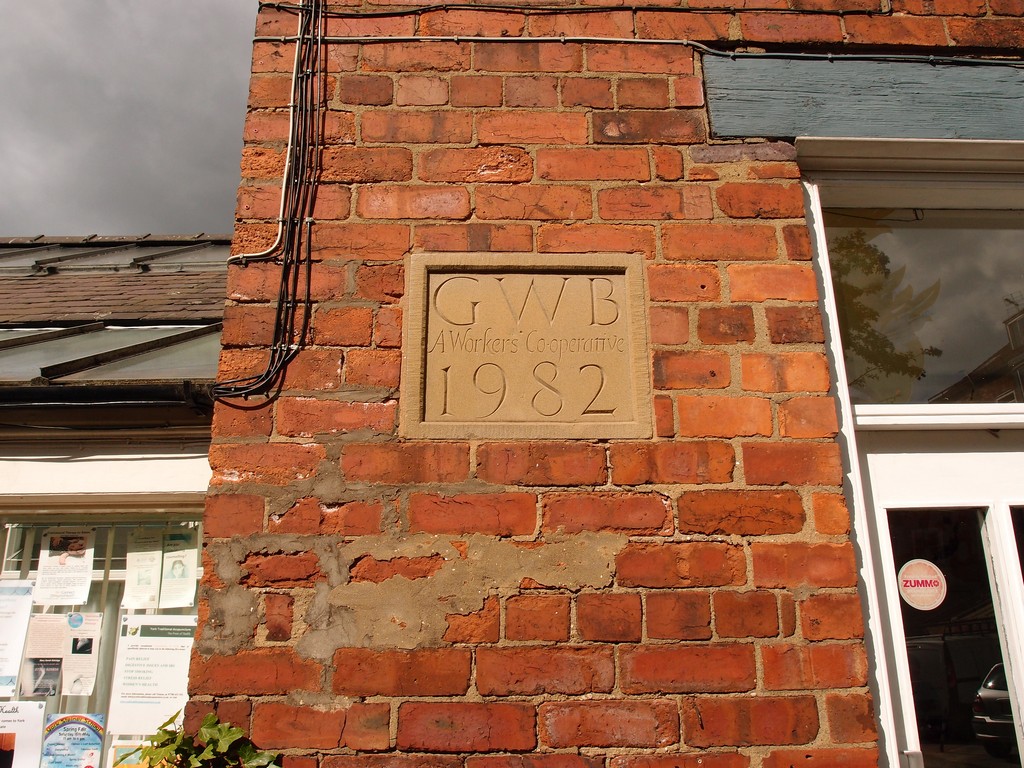 Nicely carved lettering. I wonder who did it. Once you start looking properly there are so many questions.

I took one photo of Miller’s Yard one bright morning in 2004 when on my first ‘York Walks’ for this website: 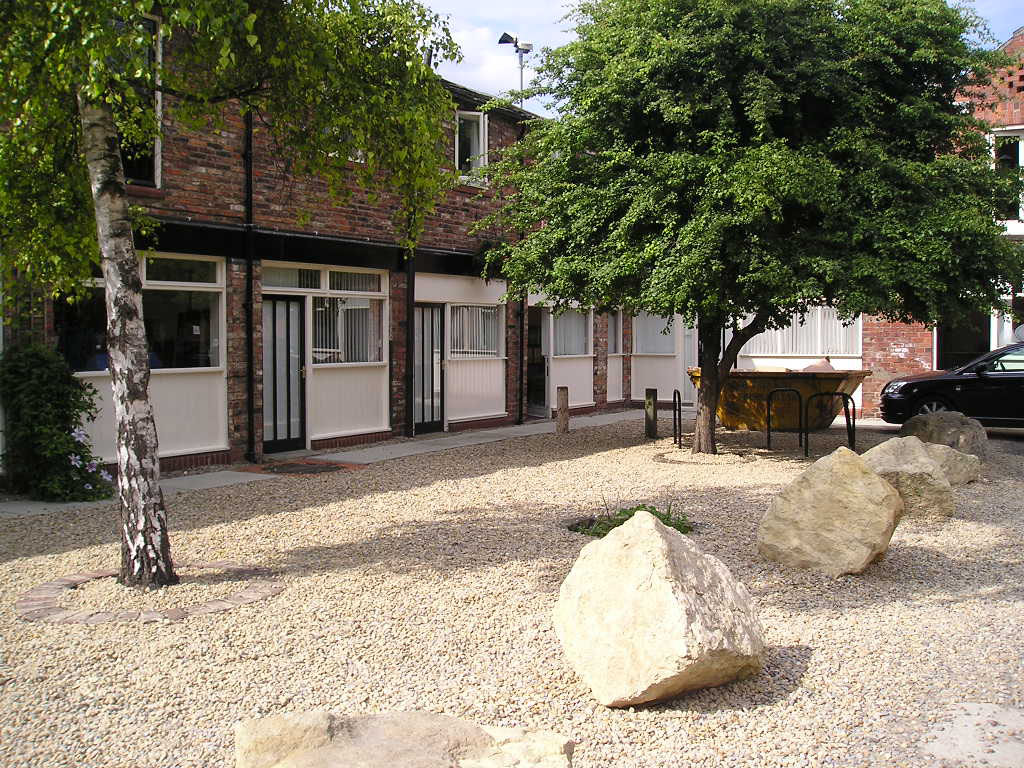 But since then I’ve been dashing through it with no thoughts surfacing.

Until the plaque on the bench made me stop awhile, pause, pay attention. 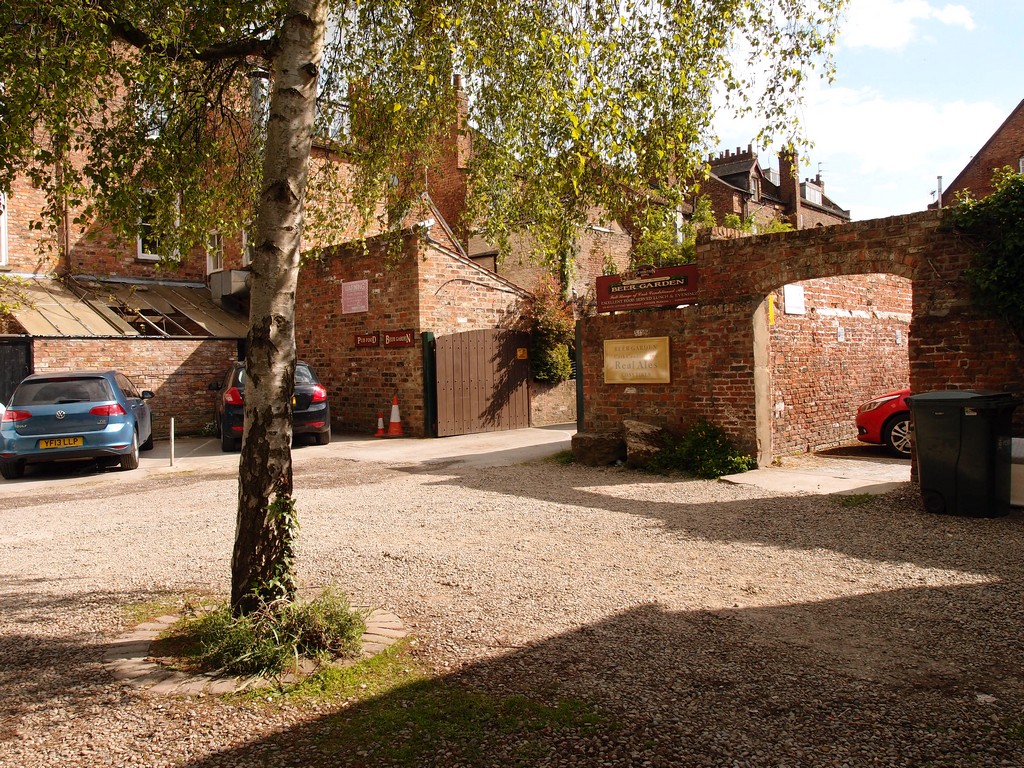 Somewhere in my vast piles of York-related papers and cuttings I’ve got an old article about the Gillygate Wholefood Bakery, dating from the late 1980s, I must try to find it.

Meanwhile, do other readers remember it? I’m also wondering if someone can clarify whether the wholefood bakery and cafe occupied two of these units together, here in the corner? I remember it that way, but may be wrong. So many years ago … 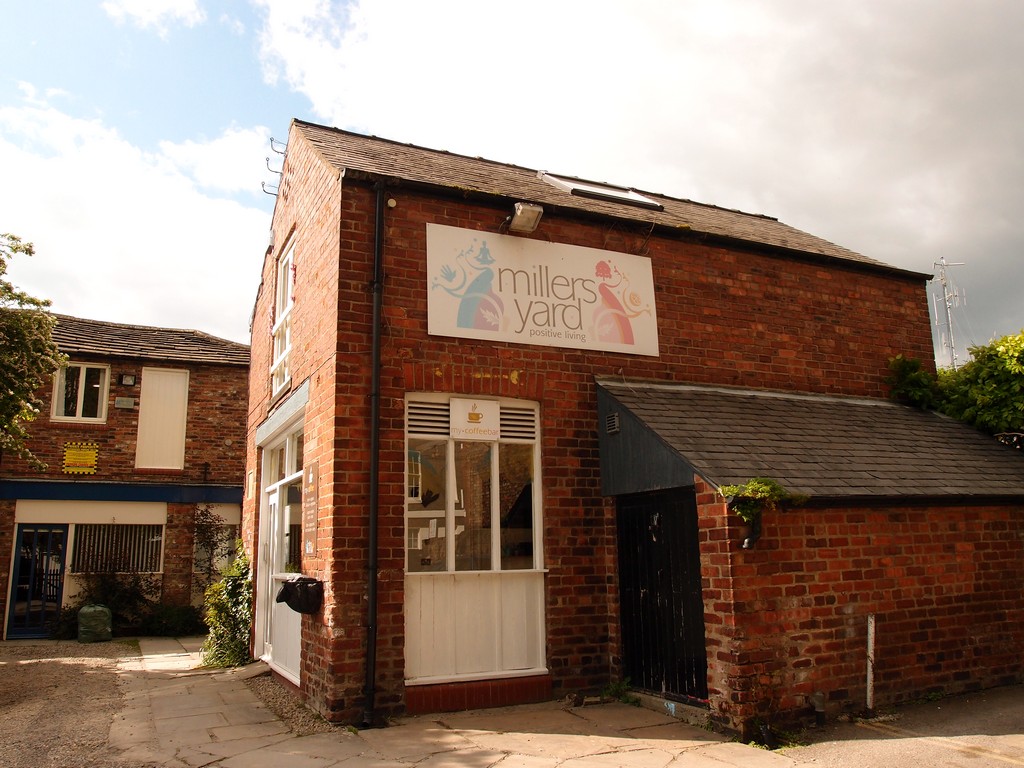 I Googled for more information, but didn’t find much. This Workers’ Co-operative may have a stone in place in Miller’s Yard but doesn’t seem to have much of a record here in the online world, so please add a comment if you have further information, thoughts, or memories.

Since this page was originally published on 27 May 2015 many interesting comments have been added (see below). Thanks to everyone who has contributed their memories and thoughts on a place I couldn’t find much information on back then.

Earlier this year I was sent a couple of photos of the original Gillygate Wholefood Bakery, and the people who worked there, before it moved to Miller’s Yard (see above). I’ve been meaning to get around to adding them for some time, and the most recent comment below, from Sarah Jo, has prompted me to get around to doing that. Apologies that I didn’t do so sooner. The photos are from the late 1970s. See below for more info. 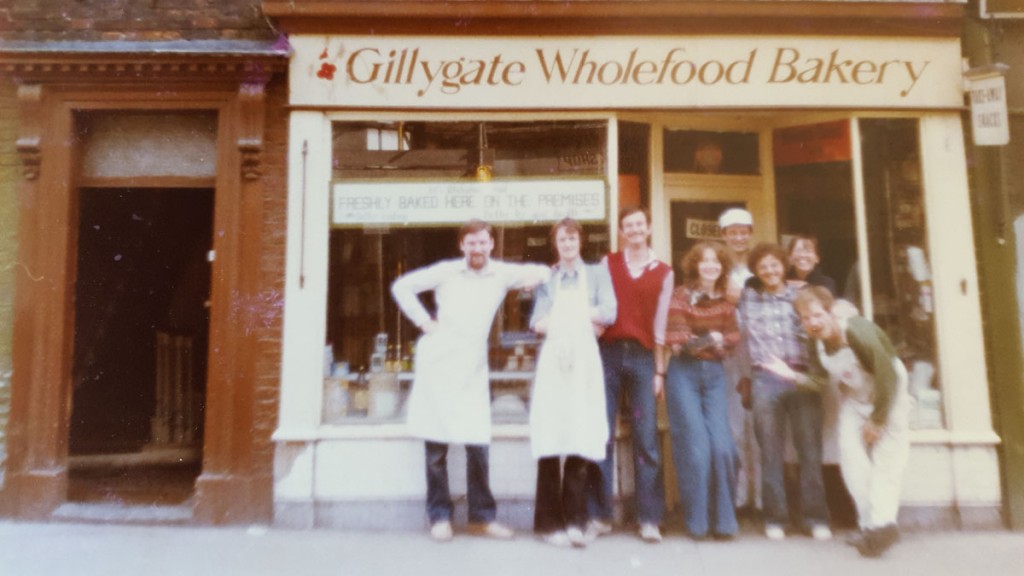 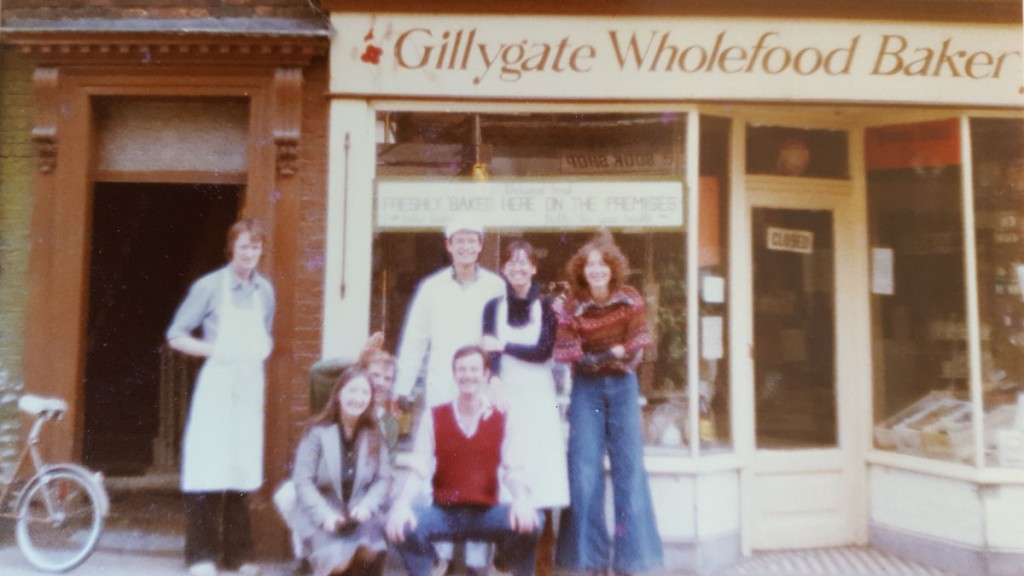 I’m not sure who took the photos, but many thanks to the person who sent them to me, and also added the following information:

“The Bakery started across the road from Miller’s Yard (before it existed), at no 12 Gillyate I think … started by the man with the white cap and glasses, Mike Sheppard; who came from Botton Village Camphill, in Danby Dale, Yorks, in order to set up a working/living city centre environment. So began the bakery.
The photos from date from 1977 or ’78.
Man in sleeveless jumper is Andrew. Man in white overalls and blue shirt is Mike (Brid) Jackson (a baker). Man in blue checked shirt is ‘Toosh’ (master baker). Man in overalls and green top is Barry (miller). Man in overalls and white shirt is Geordie Dave. Woman in blue jeans is Alex. Woman kneeling is Val (Toosh’s wife). Other woman with glasses may be Marian?
A key missing person is Anne (Maggie) Sikking … who was a major working partner with Mike Sheppard and Toosh in running the bakery. She later wrote about help with founding other cooperative businesses, and is now a writer in York and has a restaurant, El Piano.”

If you’ve found this website interesting and useful, and would like to support it and help with the costs of keeping it online, then virtual coffees are always welcome. Thank you.

Lisa @YorkStories is the creator, administrator, and writer of content on www.yorkstories.co.uk. She can be contacted on this link or via Twitter, @YorkStories
View all posts by Lisa @YorkStories →
Tagged  Gillygate
To link to this page's proper location please use the > permalink