Glorious summer, and this sun in York 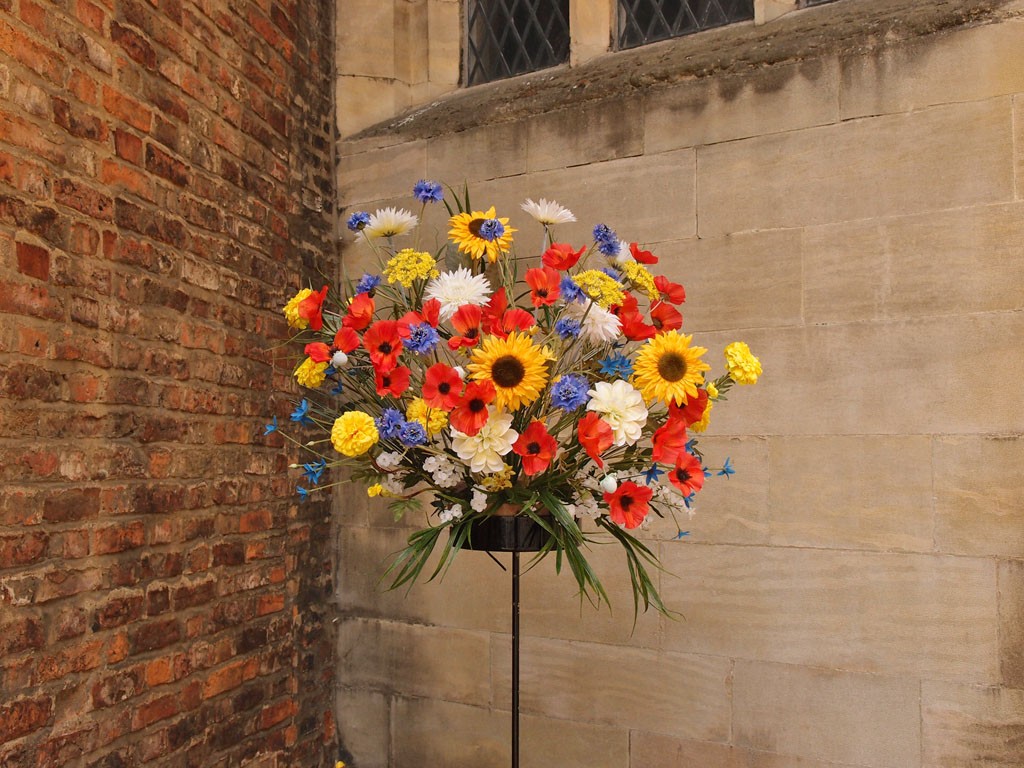 It has been a while, hasn’t it. But I can’t let another month go by without an update to this long-running record of York and its changes, so thought I’d share some images and thoughts gathered over recent weeks, during a summer that has been surprisingly hot and sunny for weeks on end.

This summer saw the first Bloom! York festival, celebrating all things horticultural, with some fantastic displays of floral loveliness. After dashing across York on a very hot afternoon earlier this month I particularly appreciated the coolness of Holy Trinity church on Micklegate, enhanced by the relaxing greenery of trees. 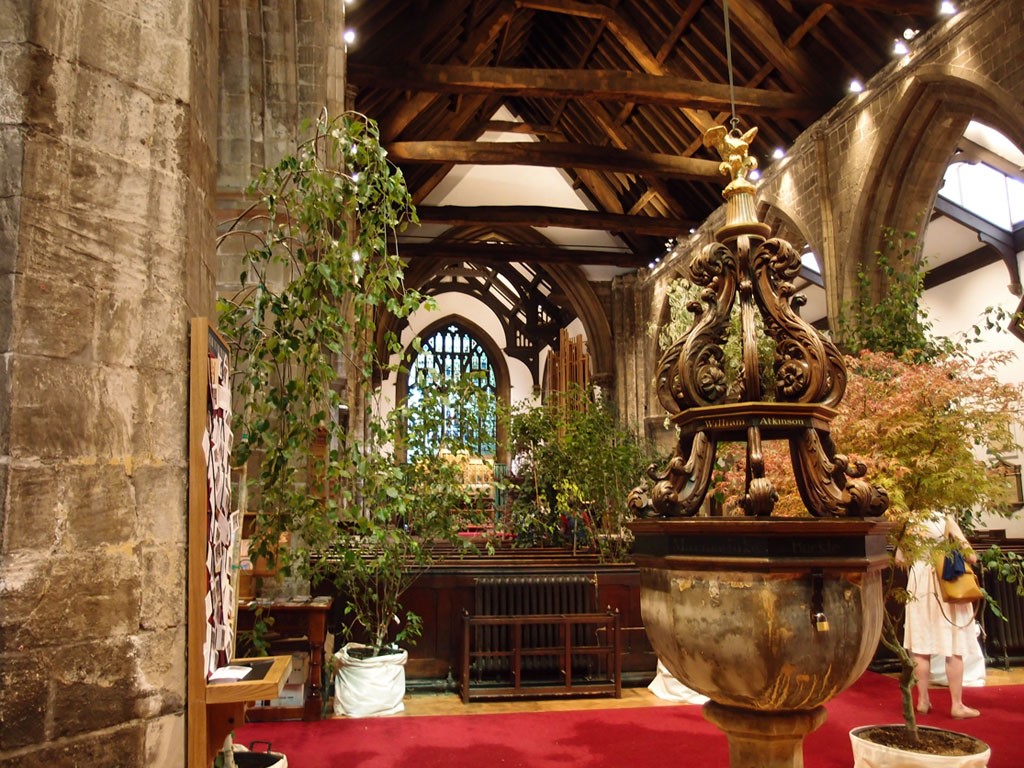 A cool place for quiet contemplation, with trees in tubs and birdsong through the speakers. Beautiful.

I didn’t get to see much of Bloom York, but what I saw was cheering and uplifting. Like Etty looking pretty, in Exhibition Square, adorned with flowers. 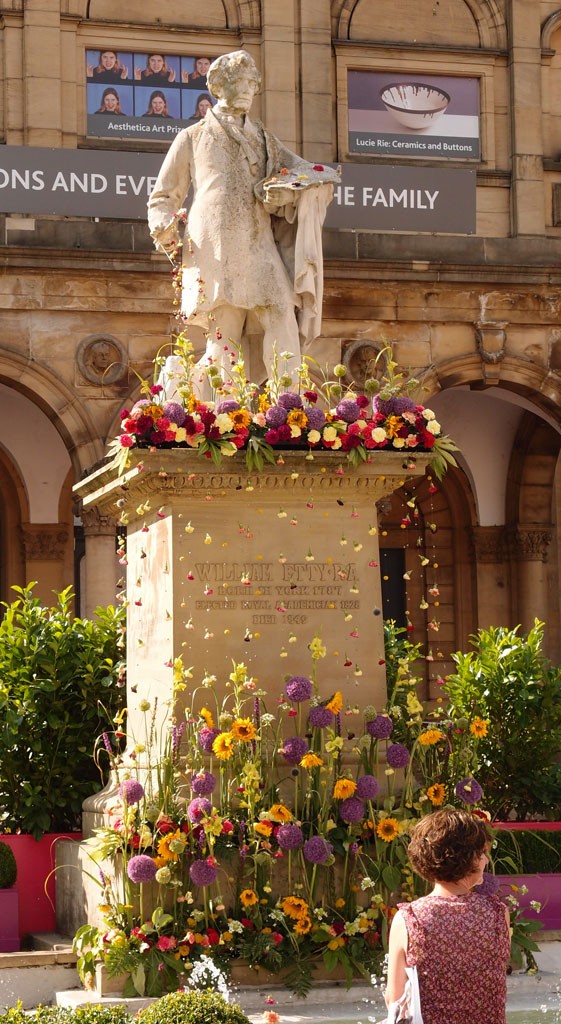 A fountain of flowers around the plinth, even some on the palette he’s holding.

I’ve written about Etty and the fountain and Exhibition Square many times before. The square is often virtually deserted when I pass in the evenings, when the art gallery overlooking it is closed. Quite a contrast to see it on this sunny Saturday afternoon, and good to see so many people enjoying the square, and particularly its fountain. 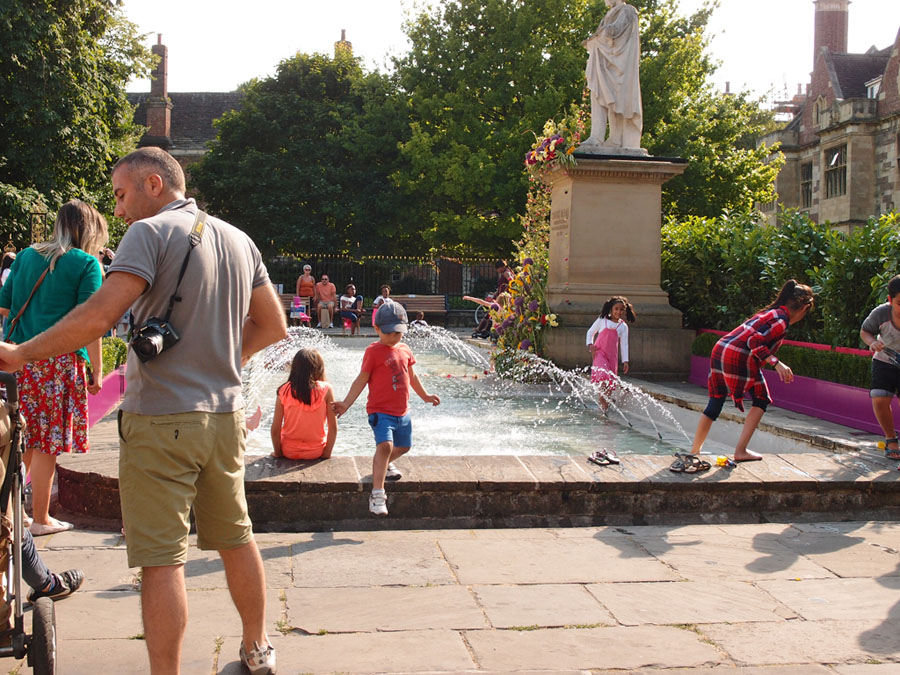 A page I wrote some years back about this fountain included this quote from a York Civic Trust annual report, published many years ago:

‘It is a pleasing thing to see young children running round the square thrilling to the dancing water.’

The greenery and flowers really did bring a feeling of celebration to the fountain and the square. (On that particular day when I took the photo above there was a general feeling of celebration, as I emerged from the quiet of the library to streets where people were spilling out of pubs singing ‘football’s coming home’ …)

Not far away from Exhibition Square is Dean’s Park, where greenery and flowers can be enjoyed all year round. And, usually, it’s a nicely calm and quiet place. Not so quiet this summer though, as there’s a summer attraction occupying part of it. 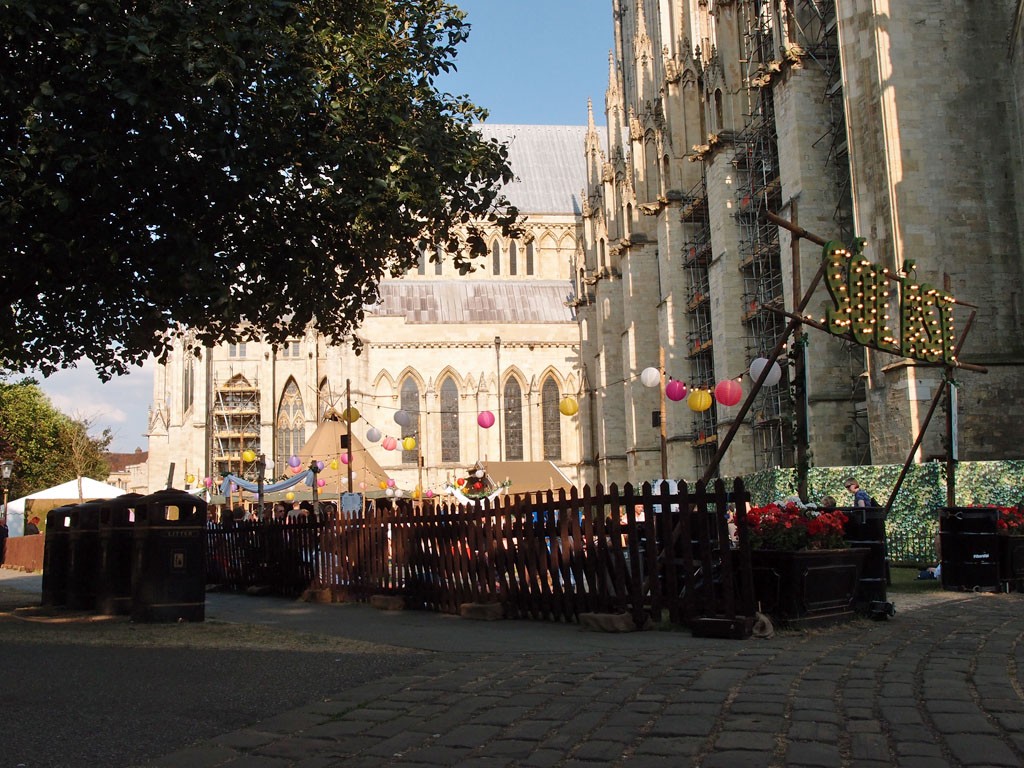 I sat on the grass outside the Sol Ast enclosure and observed its ambience. Clearly lots of people having a good time. The music from it rather clashed with the joyful exuberance of an excellent group of buskers performing within earshot in front of St Michael le Belfrey nearby. All very lively. Though I didn’t seem to be in the city centre at the right time to see and be shocked by all the stags and hens and general debauchery that I keep reading about in the local media.

York is often these days described as ‘vibrant’, and seems particularly lively on summer weekends. I’ve not been feeling particularly vibrant, after a recent family bereavement and illness, and an earlier attempt to venture to the vibrancy of Piccadilly left me saying to my companion that it was all too vibrant for me and that I wanted to go home and sit in the garden.

Some time later I revisited a site I’ve been following with interest for some years now, where the Spark:York development is now open. 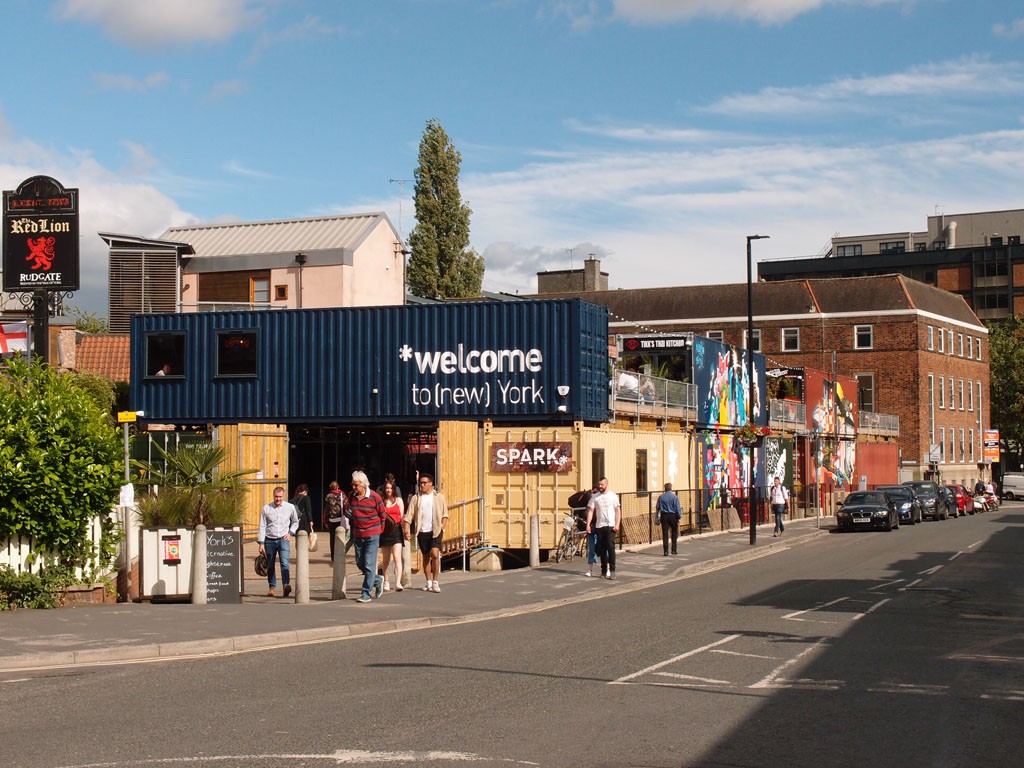 It’s certainly striking, as you approach from the junction with Merchantgate.

What was perhaps the most interesting aspect was hearing the sound of voices, many voices, people chatting while sitting out in the sun on the first floor level above the street. So much activity, on a site where I can still remember the quiet dereliction and emptiness of the Reynard’s garage building.

The opening of Spark:York hasn’t been universally welcomed, it’s fair to say. Yes, I’m choosing my words carefully and going for understatement rather than stoking things up further, as here on these pages we like to weigh things up and try to see everyone’s point of view. 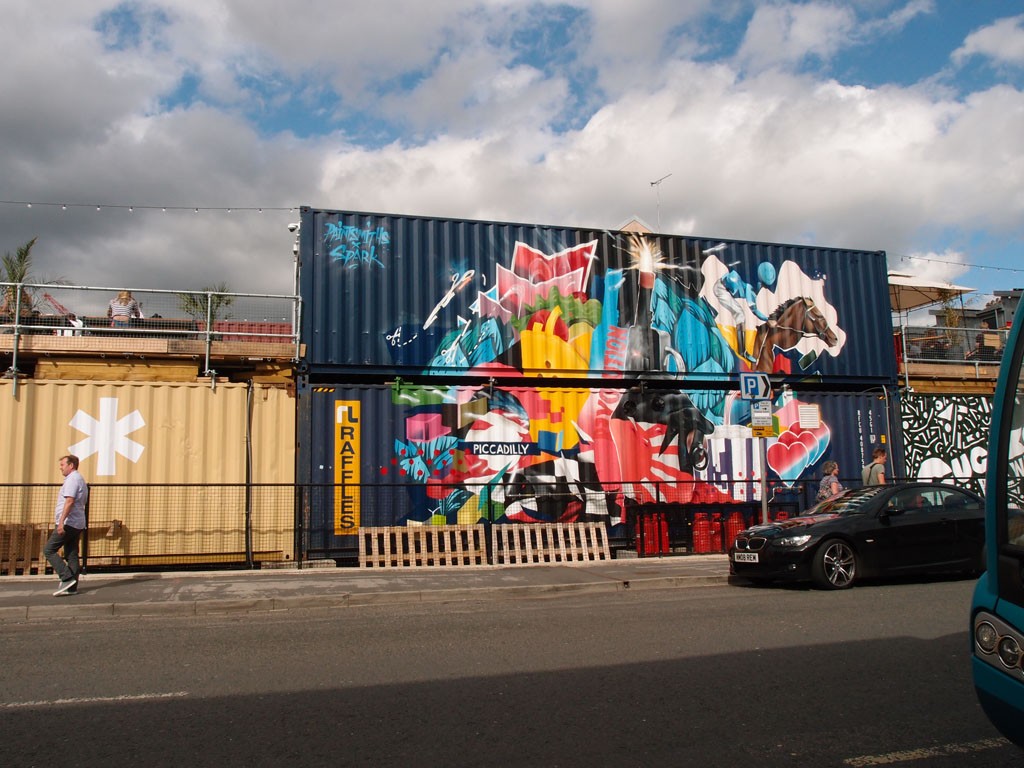 The shipping containers were supposed to be behind ‘soft timber cladding’, according to the earlier plans as approved. Instead there’s some graffiti art on the side. The Guildhall Planning Panel comments on the planning application note their disappointment that the result is ‘more edgy than originally proposed’.

It may seem like a minor point but it does raise wider questions, all too complicated to go into on this page. Personally I’d rather valuable resources went into other things, rather than essentially pointless cladding to cover up some paint. But anyway, it seems that the matter is to be discussed and decided by the planning committee in August.

To clad, or not to clad, that is the question …

Guess where we’re going next … 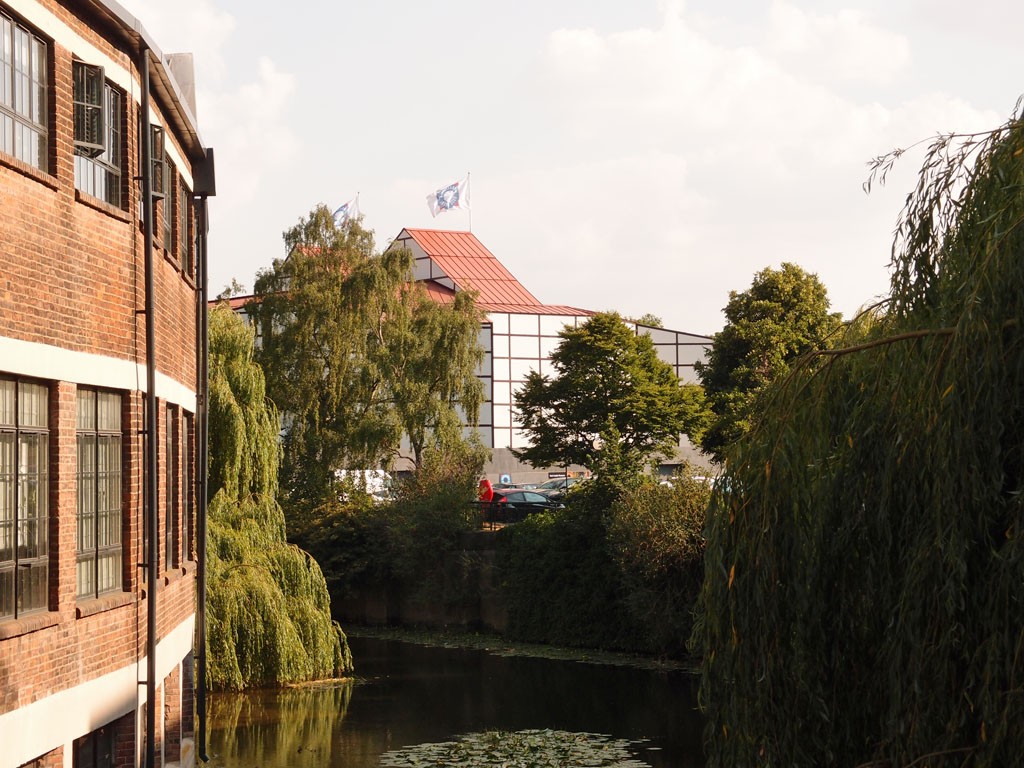 Just a stone’s throw away, on the other side of the Foss, is the much-anticipated ‘Shakespeare’s Rose Theatre’, here for the summer on part of the Castle car park. The side of the theatre structure looked a bit more shiny and modern than I was expecting, as I approached it from the riverside walkway by the Coppergate centre.

Is this some cladding which I see before me? 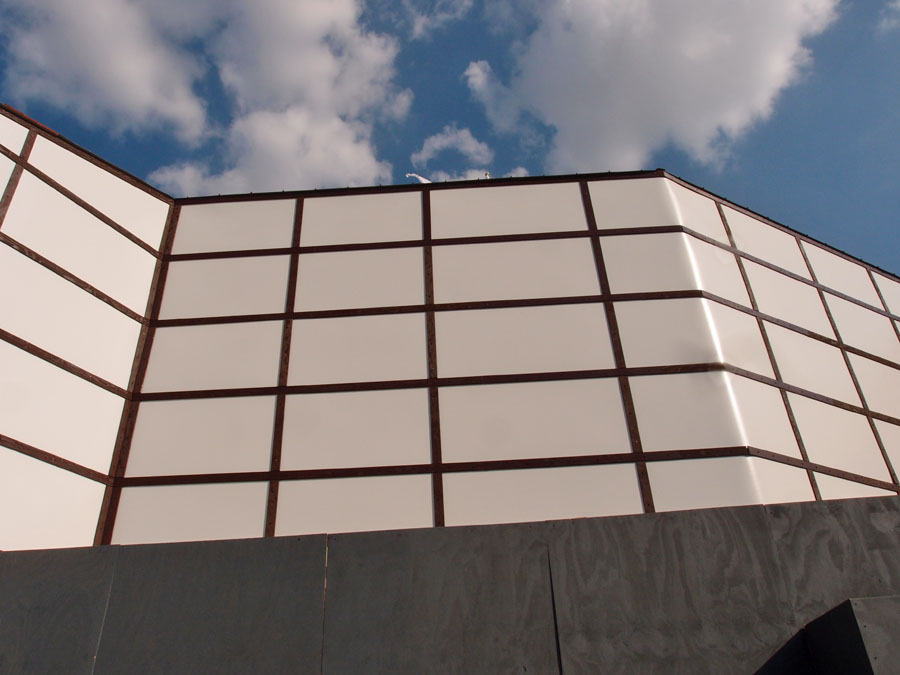 Perhaps it could be donated to Spark:York when the theatre is taken down.

Inside here there’s what sounds like an impressive structure: ‘state-of-the-art scaffolding technology, corrugated iron and timber with the historic 13-sided design of a 16th century Shakespearean theatre’, says the website.

In my usual way, I’m doing the ‘observing from the outside for free’ thing. Here’s a photo of the entrance, which has heads on spikes and pigeons. The pigeons aren’t real ones. (And neither are the heads, obviously.) 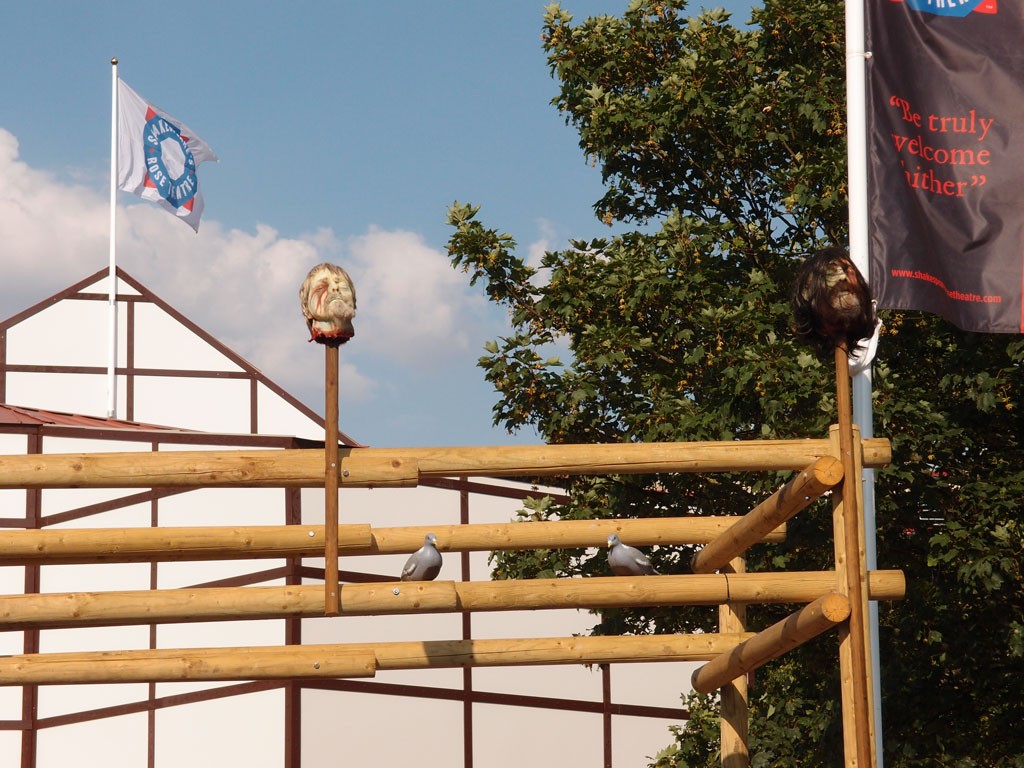 Again, as on Piccadilly, what I noticed most was the noise, laughter and voices, happy people on a sunny afternoon. At Spark:York and at the Rose Theatre new structures had brought new life to these particular sites, in creative and interesting ways. Does it matter what the outside looks like? These things are only here for a while.

Whereas some structures have been here for centuries, loved and cherished. I’ll end this page with a familiar building I’ve written about many times in the past. It has known many many summers, and this summer it’s overlooking the Rose Theatre’s temporary site in the car park below. 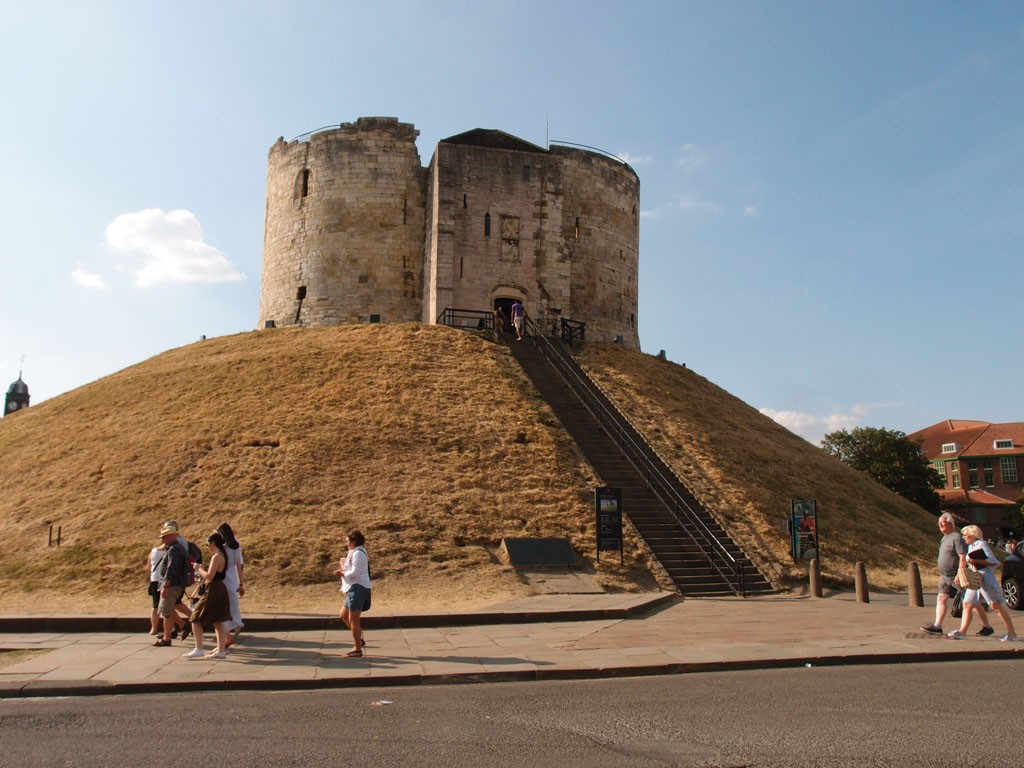 Clifford’s Tower, with its grassy mound all brown and dry from the summer’s heatwave.

In recent months the controversial plan for a new visitor centre here at the foot of the steps has been abandoned, as I’m sure most readers know.

It will be interesting to see what new plans come to light for this area. It would be good if they could better represent the complex histories of this castle site, and how its buildings are linked, and how it has been shaped over the centuries.

So much happening in ‘vibrant’ York, and so much change and development, since I started this (my salad days, when I was green in judgement). Despite my recent rather long silence I’m still reading about many happenings — petitions and planning applications, demolitions and developments. It’s all very interesting and I’m sorry I’ve not had the time or the mental space to write much recently. I will do my best in terms of more regular content creation.

As I’m increasingly tired of social media and so many other online platforms (full of sound and fury), it feels more important than ever to preserve and continue this independent and carefully compiled online space of mine, even though it now means wading through more rules and virtual roadblocks (a sea of troubles), like trying to make an old site like this comply with GDPR regulations …

If you appreciate the perspectives on these pages, and enjoy this record of York and its changes then you can support it, and me, with virtual coffees via ko-fi.com, to power more pages, and help me with (the slings and arrows of) my bills …

Lisa @YorkStories is the creator, administrator, and writer of content on www.yorkstories.co.uk. She can be contacted on this link or via Twitter, @YorkStories
View all posts by Lisa @YorkStories →
Tagged  Castle Gateway, Exhibition Square, Piccadilly
To link to this page's proper location please use the > permalink