A York Walk: looking for light, signs of spring, and interesting things 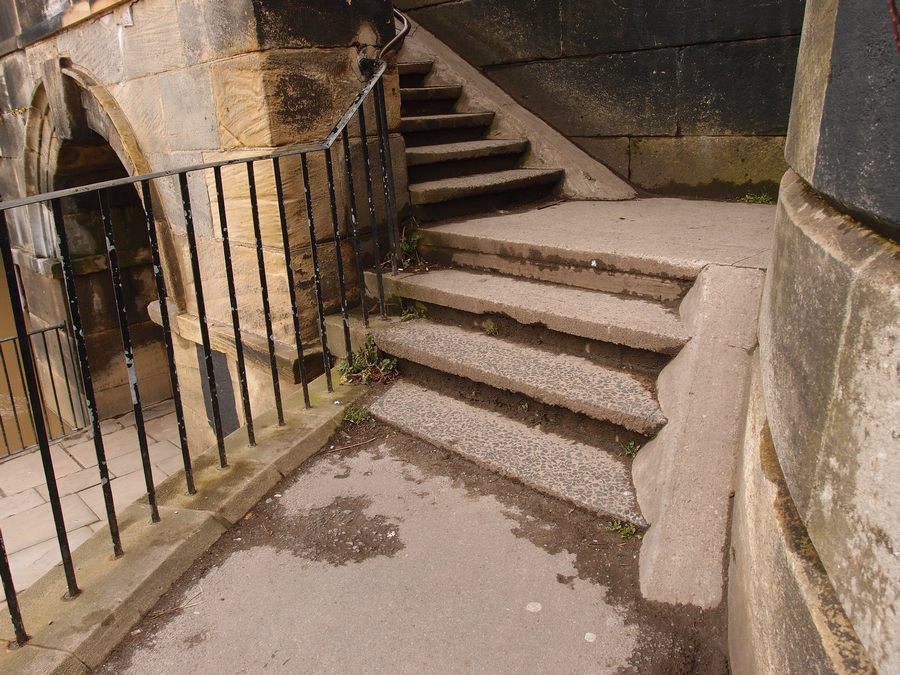 The grim cold weather in recent weeks hasn’t been conducive to wandering, and I’ve been trying to write something on the Local Plan. Both things left me feeling quite jaded, so a walk seemed like a good idea, as soon as I had free time on a reasonably mild day.

In the old days I used to set off with my camera and found myself seeing things afresh while framing the city’s buildings and streets in photos, or perhaps later, when adding those photos to website pages.

As a long-time observer of the city and its changes I find it’s all a bit more complicated now, and thinking about planning applications and the Local Plan and the like occupies more time. But this week I thought I should go for a York walk, visit a couple of places for updated photos for future pages perhaps. I hoped it would be sunny, with blue sky — it wasn’t, but still ended up being a longer wander than expected, two hours or so, and 280 photos.

I didn’t cover a great distance, and most of the 280 photos aren’t worth sharing or writing about, but I thought I’d include a few, the cheerier and more interesting ones.

Let’s start near Scarborough Bridge, at the edge of the Marygate car park. I was perusing the shrubbery soon to be rather reduced by the bridge work, and noticed small signs of spring against the winter evergreens. 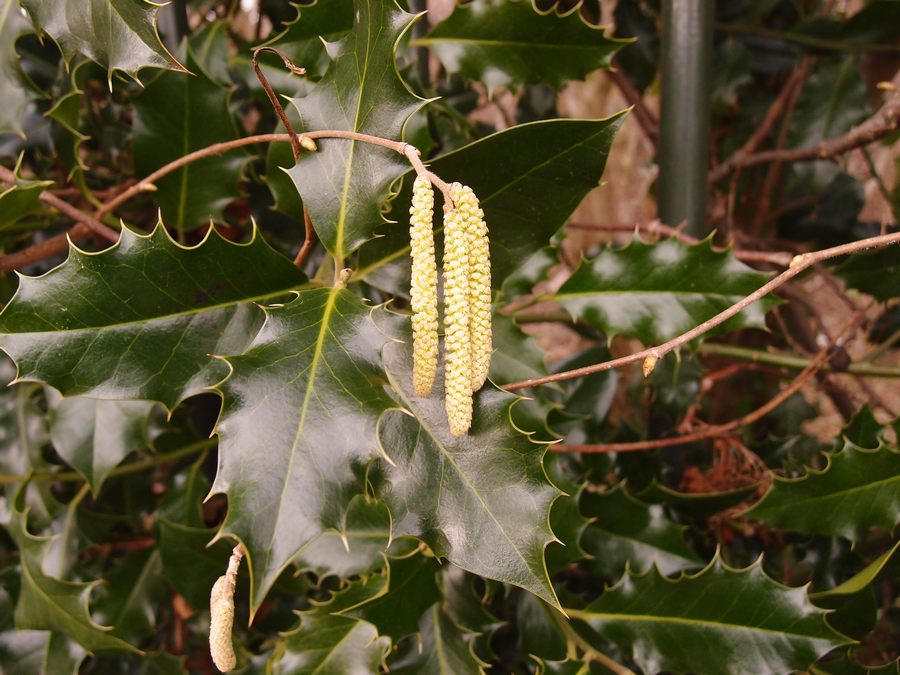 The photo at the top of the page was taken soon after, the old steps onto Scarborough Bridge, soon to be blocked off as part of the same project to upgrade the bridge. We could get diverted onto that subject, but let’s not, let’s stride on, towards town, and the city walls … 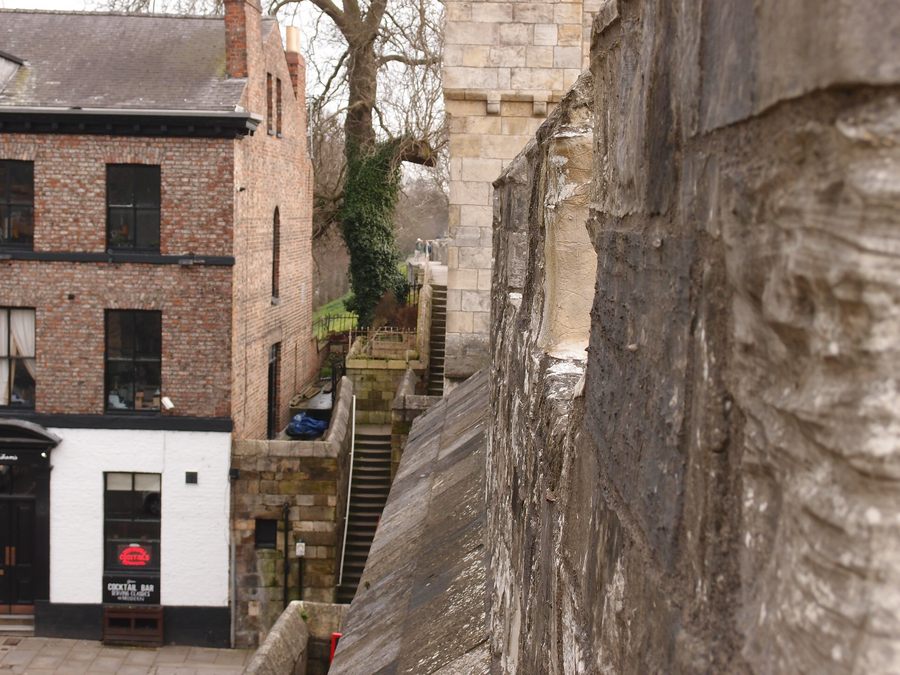 We tend to admire the gateways from the front, but here I admired the view across the back of Micklegate Bar, finding it rather pleasing, the wall walk of the next section in the distance, and the trees alongside.

But I was heading back the other way, curving round towards the river and the Minster.

In the corner of the city walls walk a litter bin intended to blend in with the ancient stone. 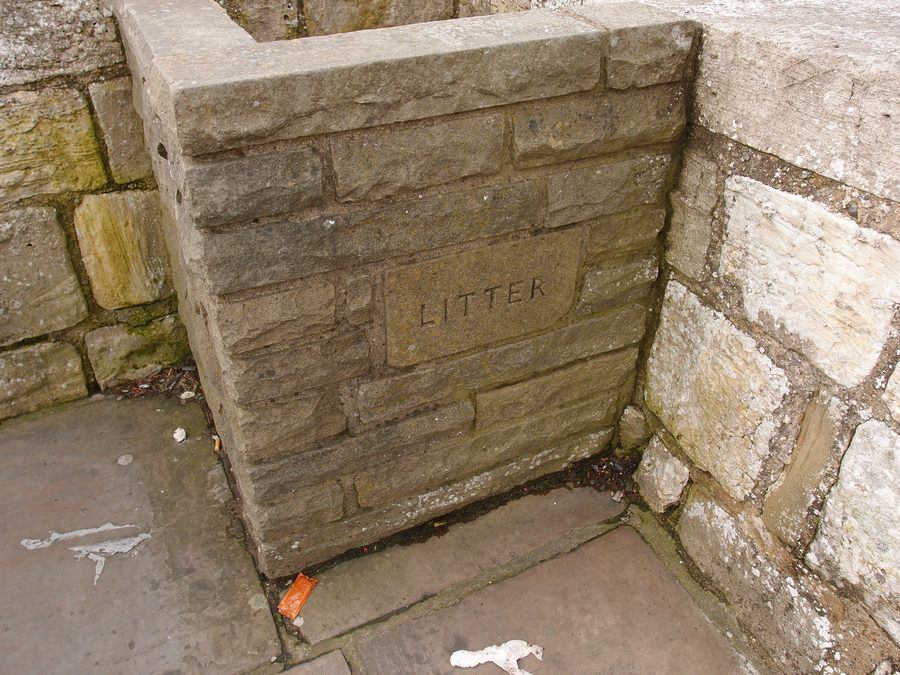 There’s another one of these I’ve noticed, in the Fishergate corner I think. I wonder when they were constructed. I wonder, as I write this page, whether they’re used much, and how often they get emptied. But that’s enough about litter. Let’s look outwards from this corner …

Looking out from that corner of the walls, I was cheered to see a plastic sheep in flowery wellies on a roof. 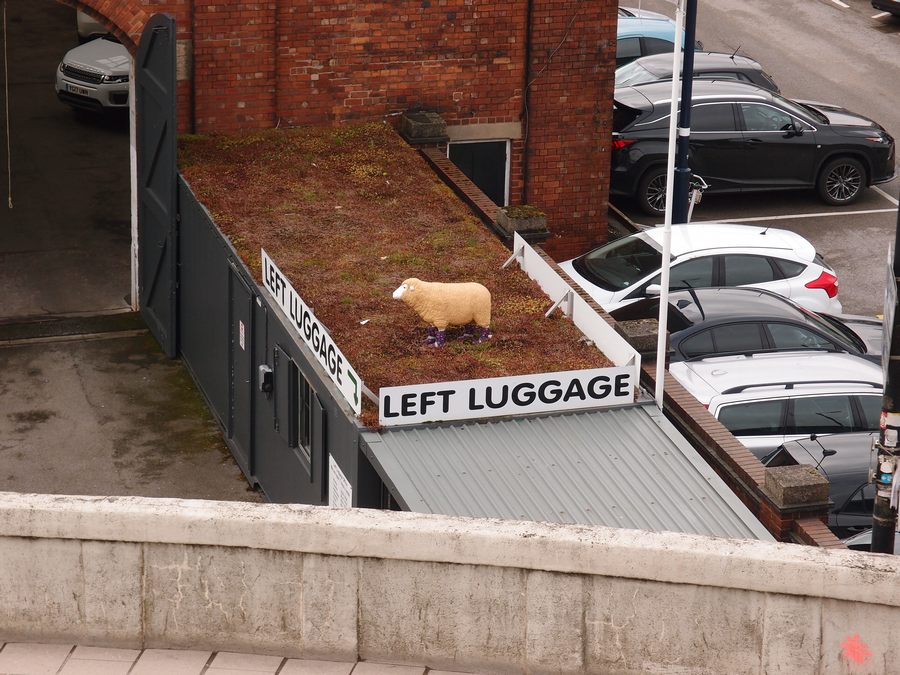 Plastic sheep in flowery wellies on a roof …

Worth going out for a wander just for that, I reckon.

And then, continuing the walk back towards the city centre, the famous and much-photographed view along the walls towards the Minster … 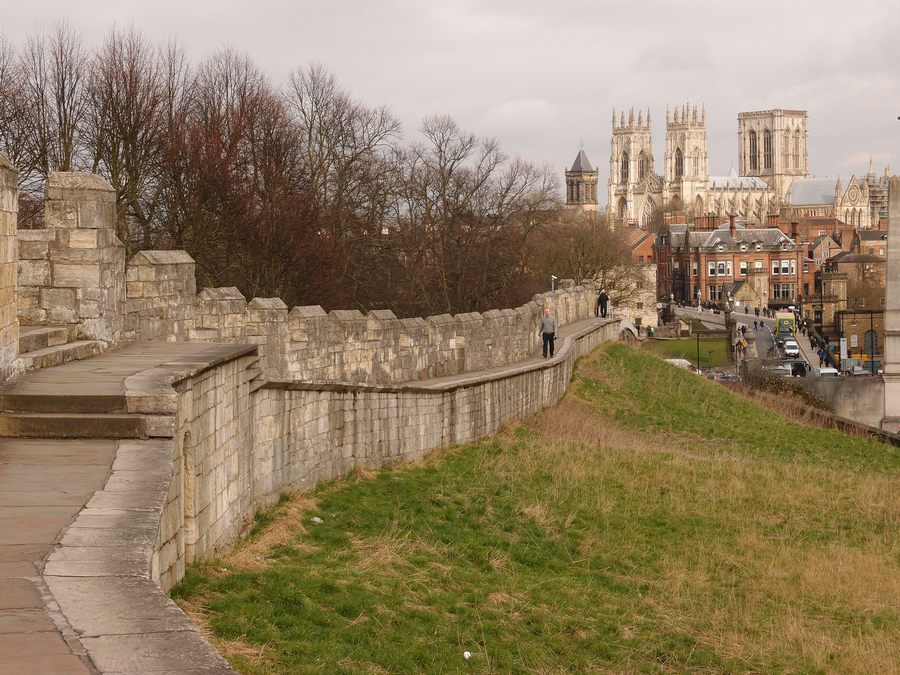 View towards the Minster from the walls by York station, 13 March 2018

… but subtly different depending on the light and sky and time of year, and here I thought it looked best turned to the left a bit, with the trees outside the walls included, and highlighting the ribbon-like snakey waviness of the limestone wall wandering its way towards the Ouse.

Then a fine bit of ‘streetscape’, viewed over a river. 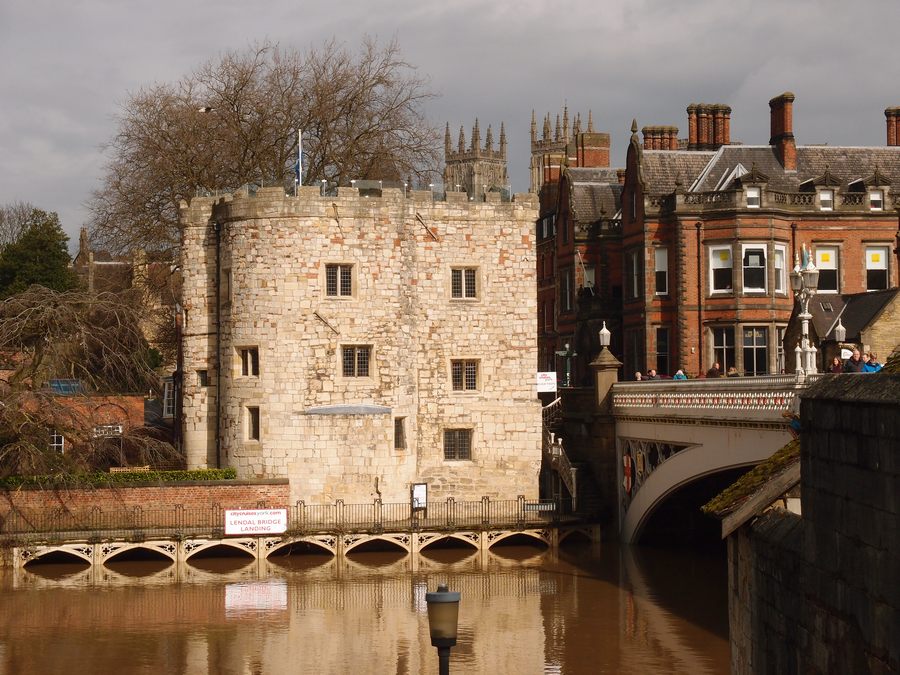 Some collections of buildings and viewpoints have always been favourites, and this is one of them, by Lendal Bridge.

Not a favourite before, but it might have been the light on this particular day, or the way I was looking at it, or the fact that a part of this is about to be demolished, but I appreciated this collection of buildings/materials/surfaces, between Toft Green and the station. 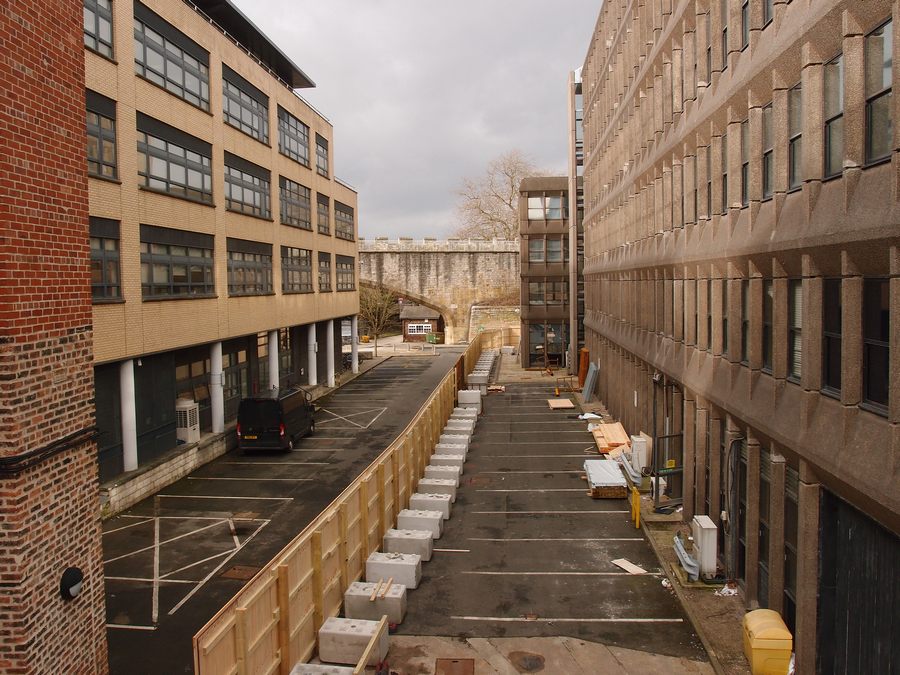 The work of different centuries, close together. A pleasing juxtaposition. 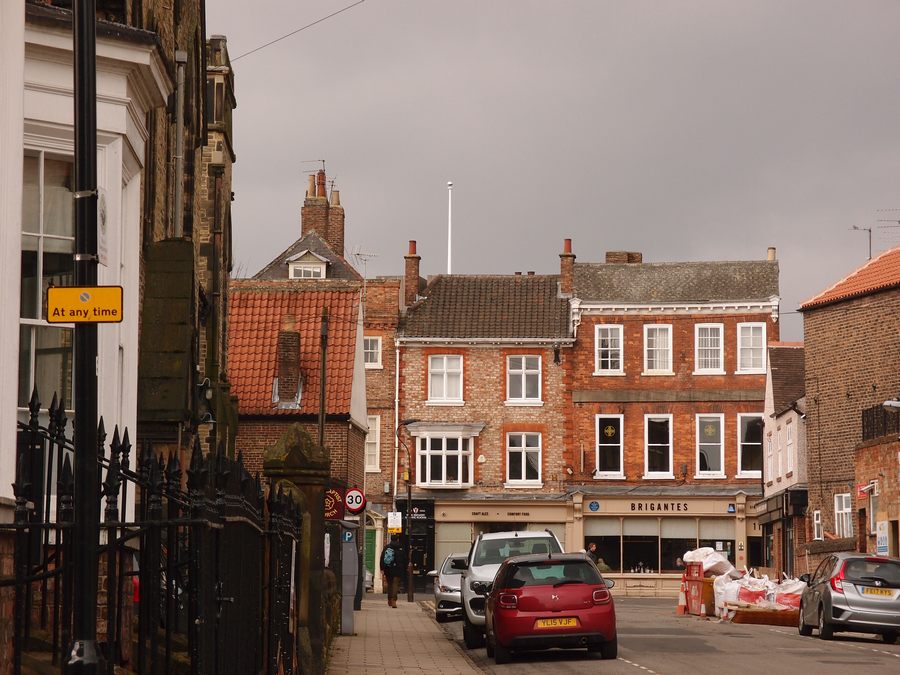 Which I hope illustrates, if I haven’t already, that you can live in this city for years and always find a new angle on it.

Down the street and round the corner, in the churchyard of St Mary Bishophill Junior, the crocuses are beginning to crumple a little, petals losing their early perfection, but they still open to the sun. 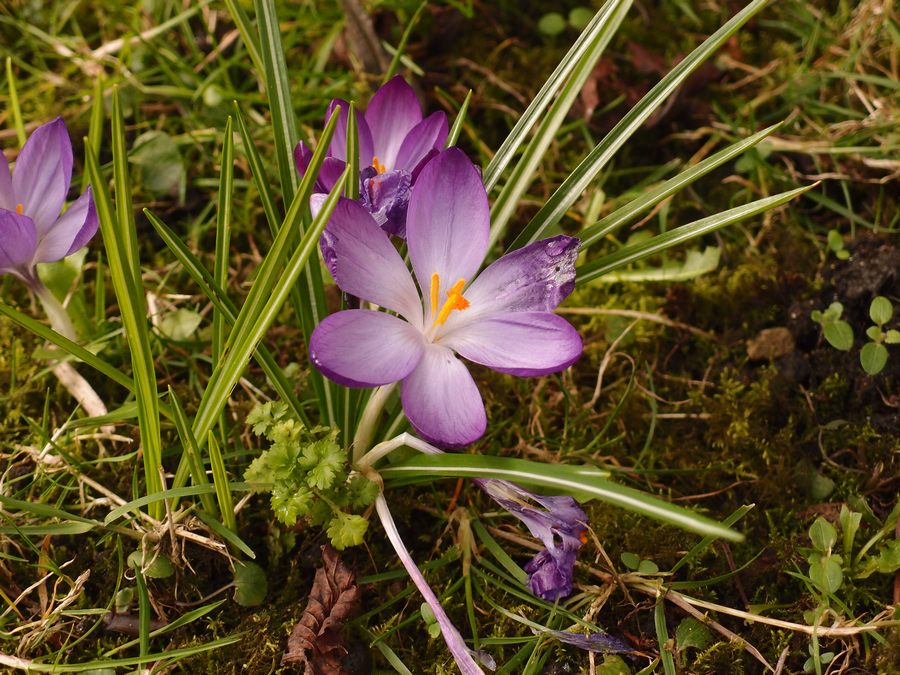 Crocus in the churchyard of St Mary Bishophill Junior, 13 March 2018

Inside the church, brighter light through the windows, as the spring equinox approaches. 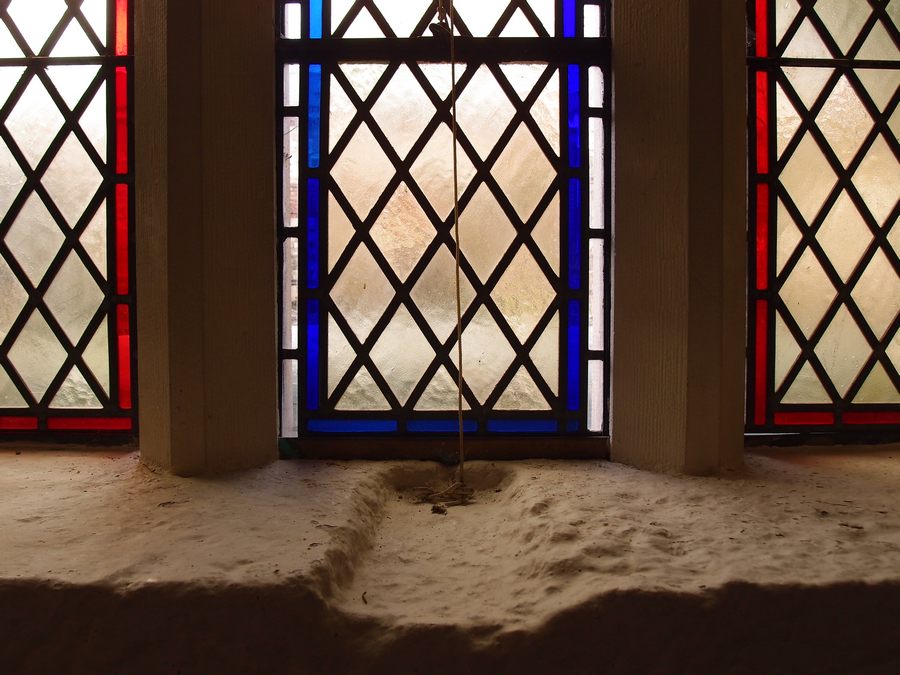 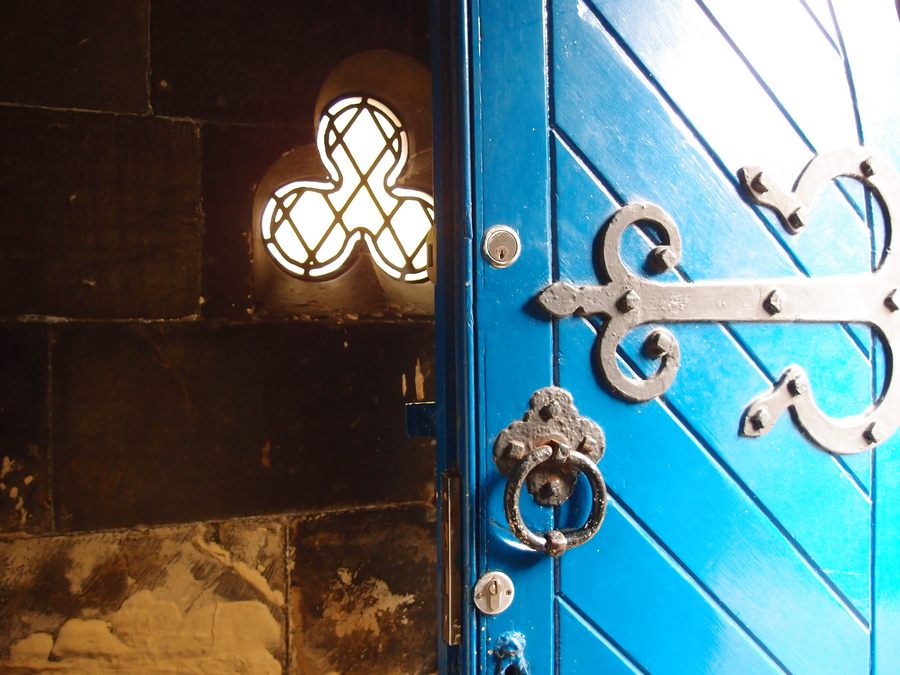 And noticed just outside, next door. 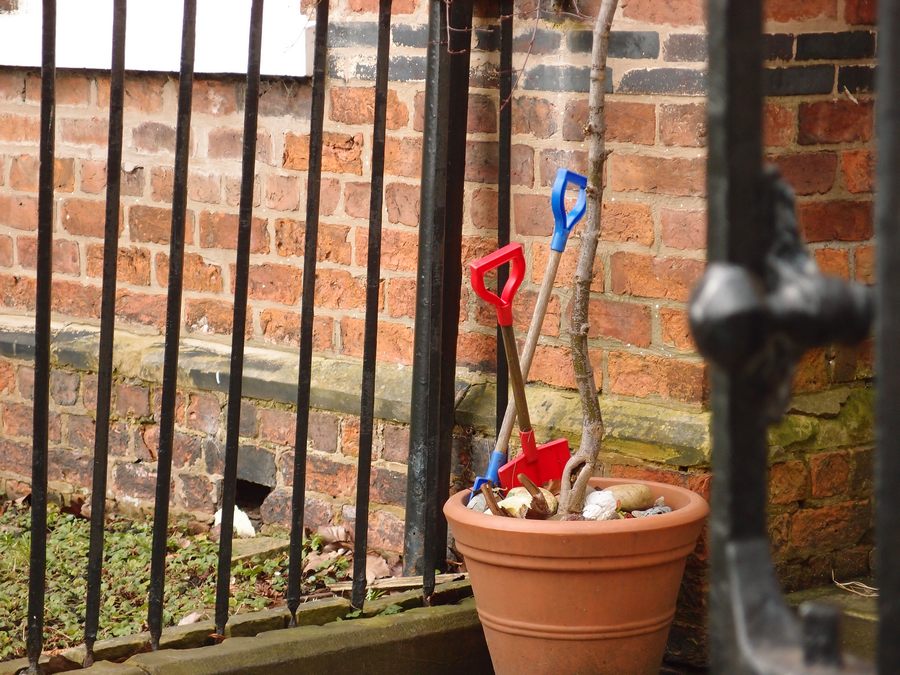 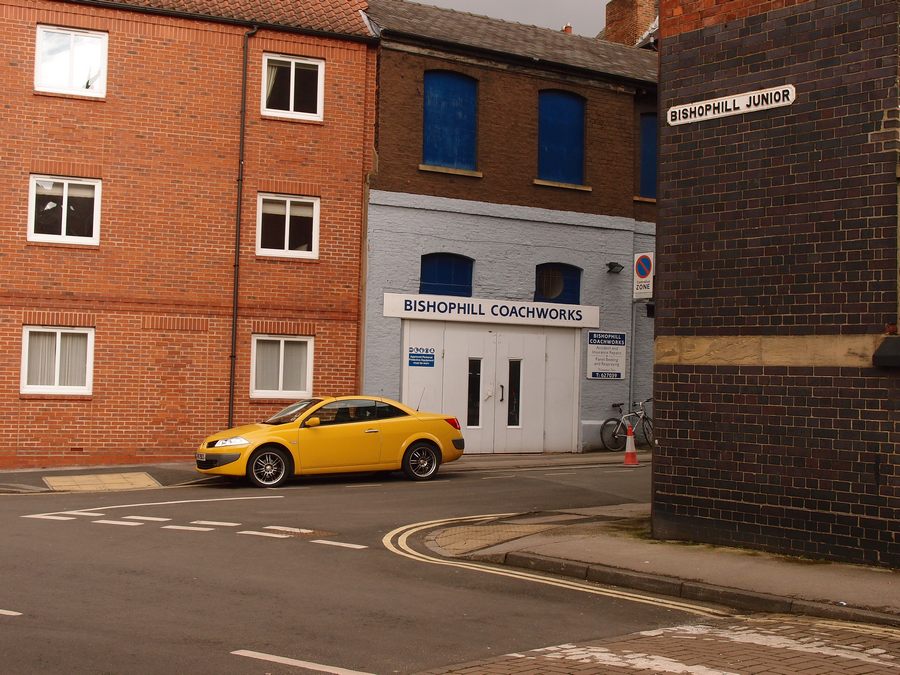 The yellow car on this particular day made the blue paint seem bluer.

At the same junction, where many roads meet, but looking down towards the river, Fetter Lane. Much changed, but still pleasing, the way it drops down and curves. The red-bordered traffic sign strikes a jarring note, as road signs usually do. 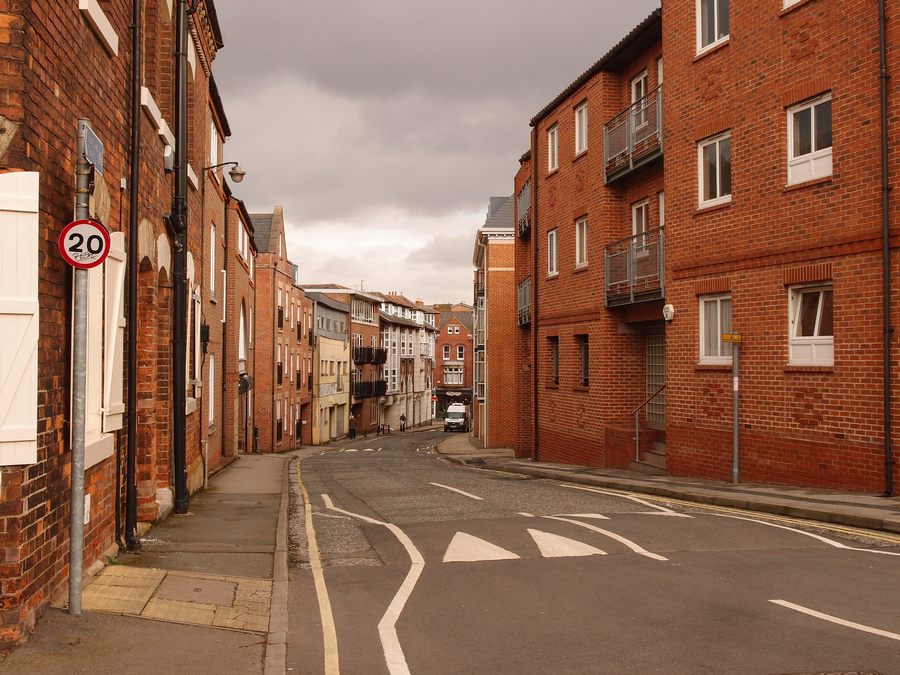 Then, a few minutes later, here we are at the river, with the always handsome Guildhall. A blue sky is always welcome, but a moody inky sky can set things off nicely too. 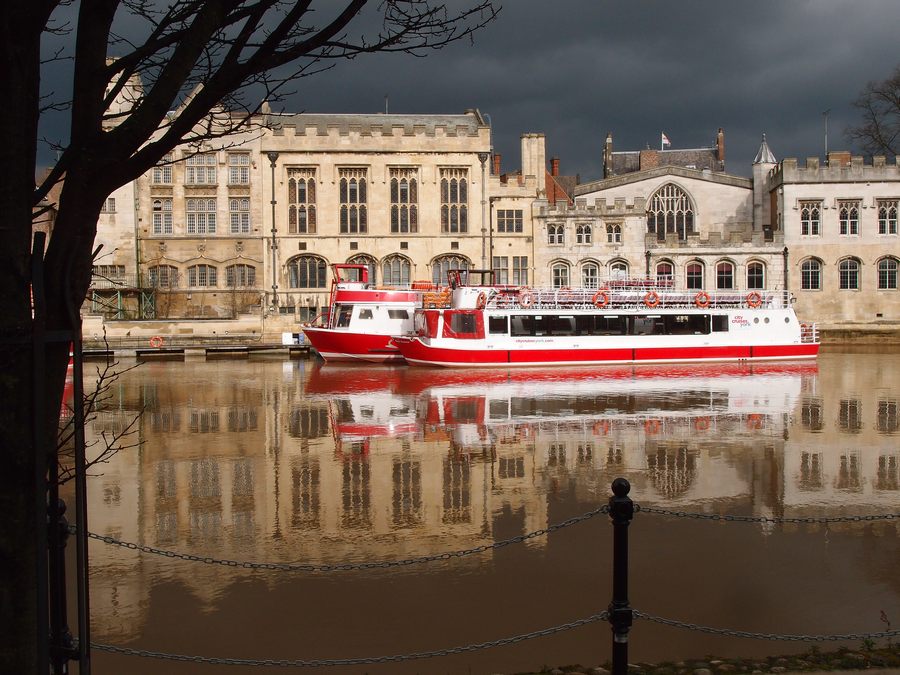 Guildhall and river boats under a moody sky, 13 March 2018

Crossing Lendal Bridge, looking down on the roof of Barker Tower … 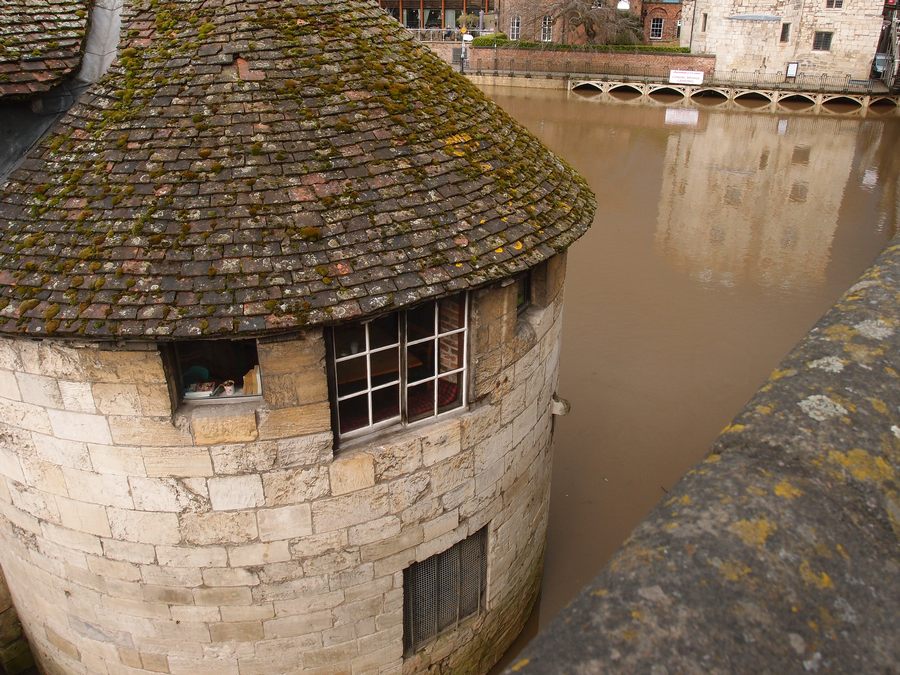 … One of the things I’ve admired for about 35 years, and I know this as I have black and white prints of photos of it taken in 1983/4.

But monochrome images wouldn’t be adequate to capture the beautiful multi-coloured life on its roof. 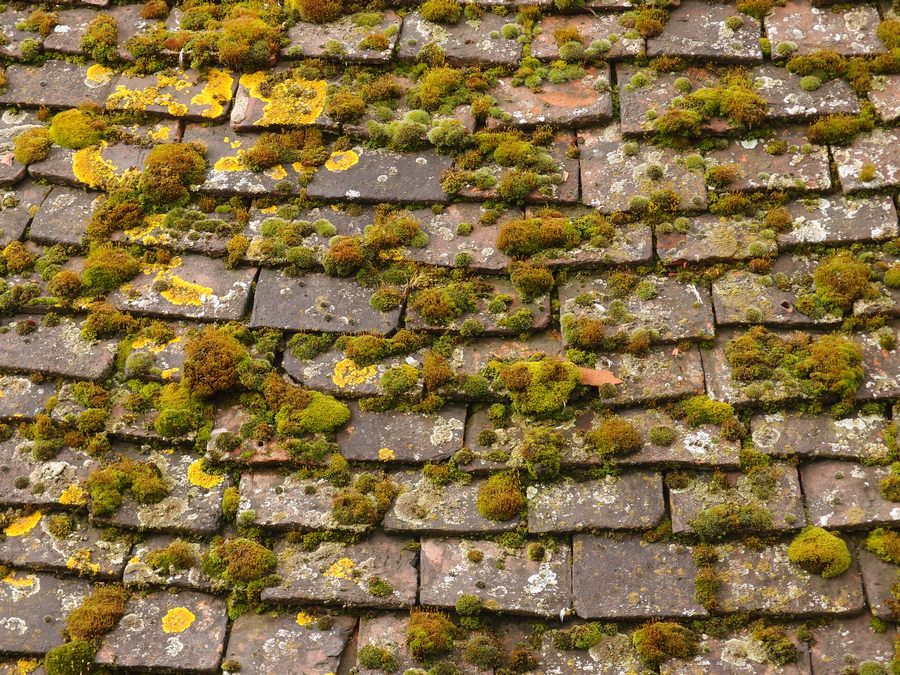 Then on Museum Street, heading for the library and then home, this view is so often splendid, and again on this particular day, with that moody sky. 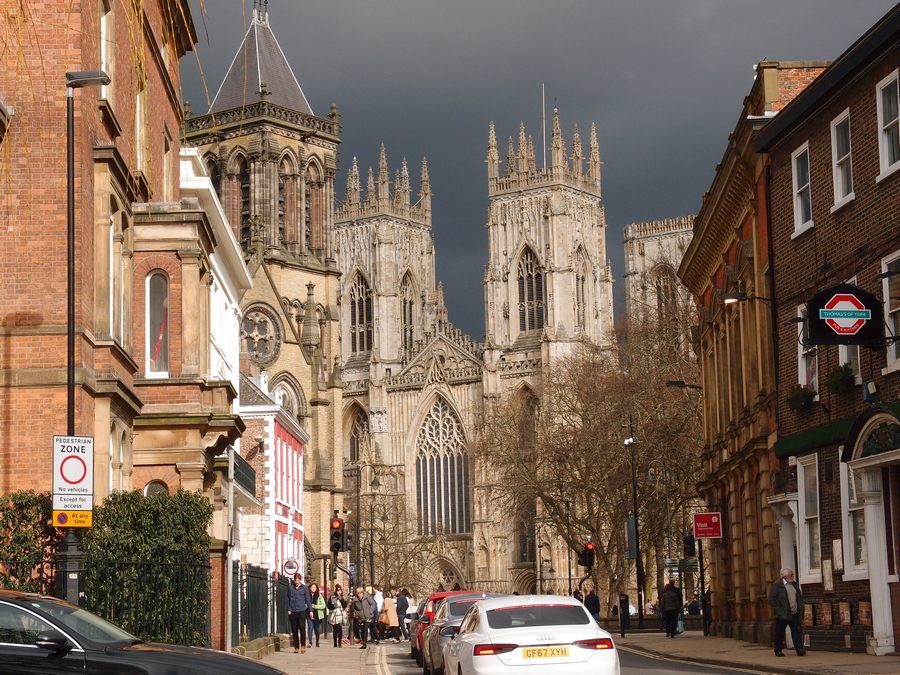 After taking that photo I took a quick diversion into the library, and found a striking piece of art: ‘Libraries Gave us Power’. 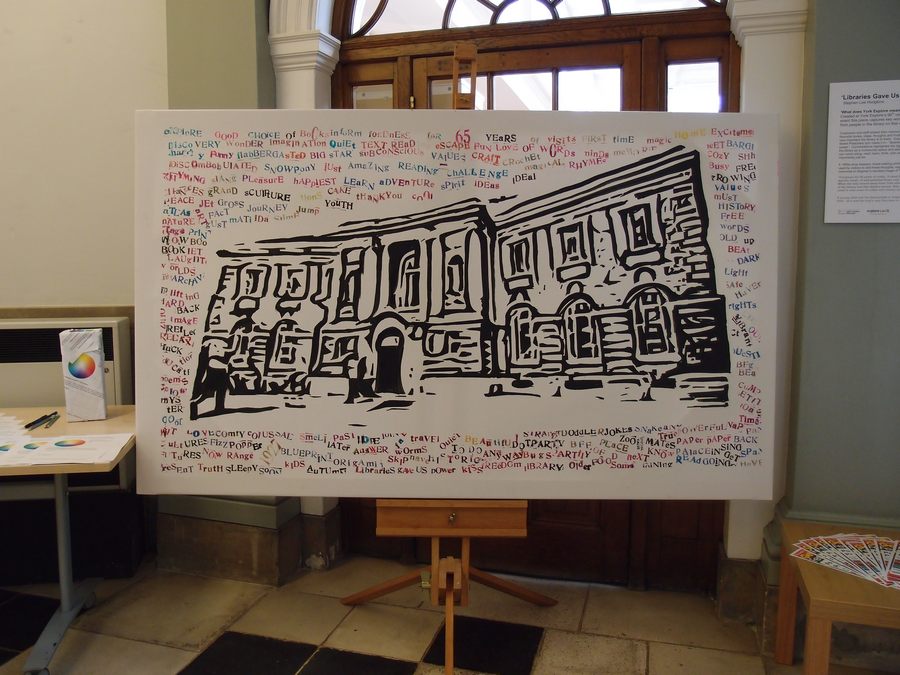 Then, heading homewards down Clarence Street, a piece of ‘art’ from an earlier time, a tiled doorway I’ve never noticed before, at number 52: 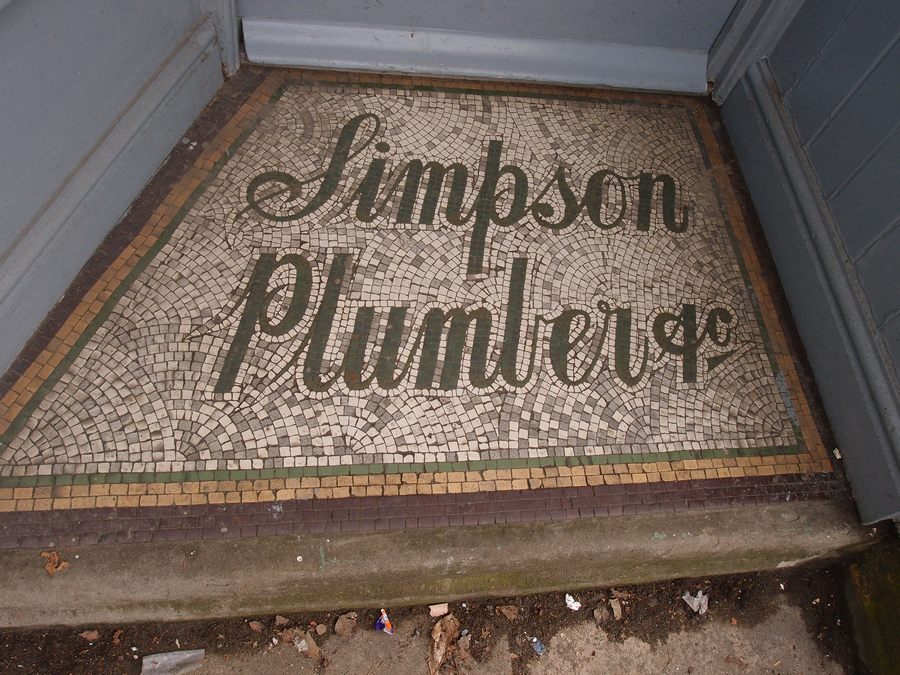 I thought that it might have been covered up by something else, or it may be that when I walk down Clarence Street I don’t look downwards into doorways.

While compiling this page I thought I should check … a quick look at the Google Street View images from earlier years shows that it wasn’t covered up, that it’s always been there. I must have walked past it so many times. Just like a couple of tiled doorways on Gillygate I only noticed in recent years. So many small historical details, so many layers and stories, in this place I think I know so well — but still there are small discoveries when wandering in the right frame of mind, with a camera in hand.

I’d still like to write something about the Local Plan, current version, but don’t want to end up bogged down in the politics of it … however would like to hear from anyone who thinks it’s better than the draft we had before, the one I wrote a few pages about back in 2013. I’ve found the local media coverage of it quite irritating — narrow and limited. Interested to hear more positive responses, particularly on the heritage and green belt protection angles. Contact me via this link (email form) or on yorkstories@gmail.com?

If you appreciate this long-running online resource and would like to express your appreciation in a way that will help me pay my bills then virtual coffees are always welcome, thank you. At present they’re the only income from this (ad-free, independent, thoughtful, personal) website.

By Lisa @YorkStories • 15 March 2018 Details, Wanderings To link to this page's proper location please use the > permalink.