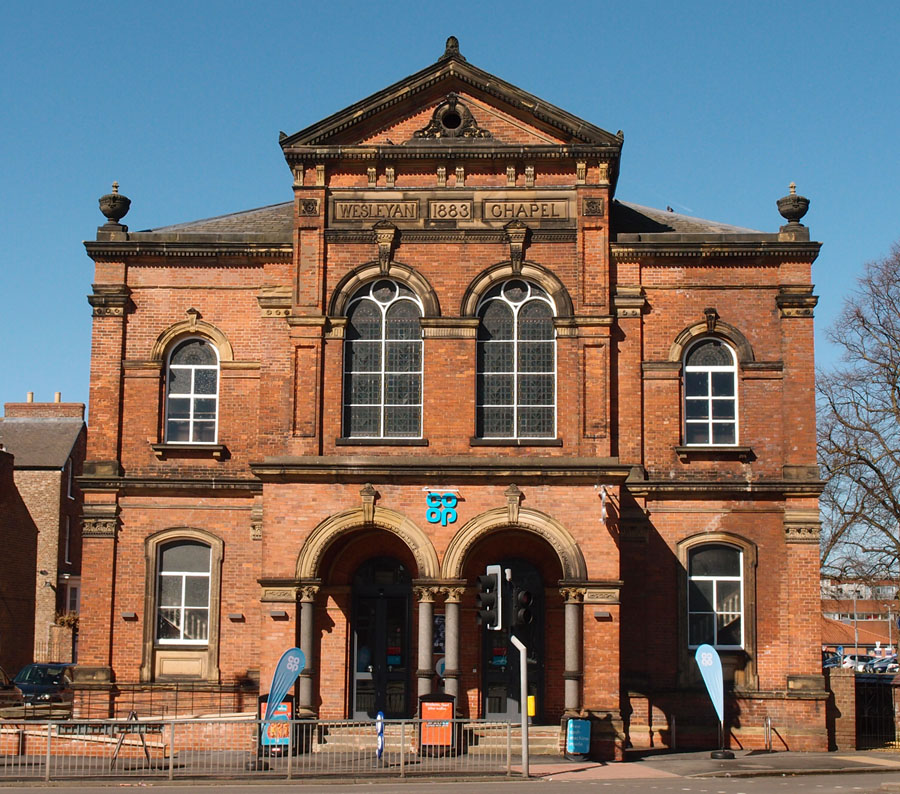 Well, this is pleasing. Pictured above, Groves Chapel, in April 2018.

Pictured below, the same building, many years back — one of the photos I included on a page about York chapels published in 2004. 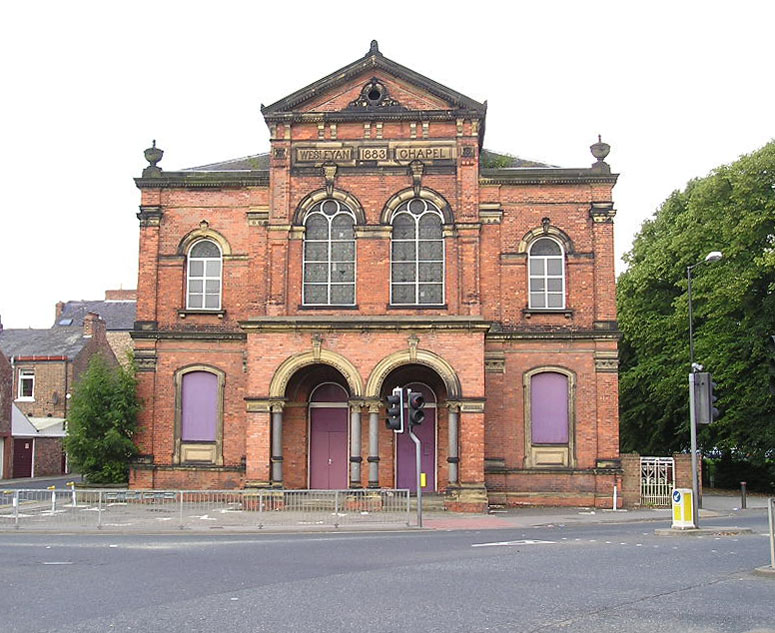 In recent years – since 2013, when it was for sale – I’ve written about this building many times. There are many pages tagged ‘Groves Chapel’.

It’s a listed building. Owned by the NHS in recent decades, surplus to requirements for them more recently and in a rather neglected state, it was seen as a building ‘at risk’ by the time it was sold. The plan, once it found a buyer, was to include a Sainsbury’s on the ground floor and residential accommodation behind it, with the preservation of what remained of its historic features inside, mainly boxed off above the retail unit.

I’ve been observing and photographing the work on the building as it progressed, every now and then, and all seemed to progress as expected, with the small but significant difference that the retail unit appeared to be opening as a Co-op, not a Sainsbury’s as originally planned. I discovered this a couple of months back via a planning application for the shop’s signs, and it was later confirmed in local press reports. 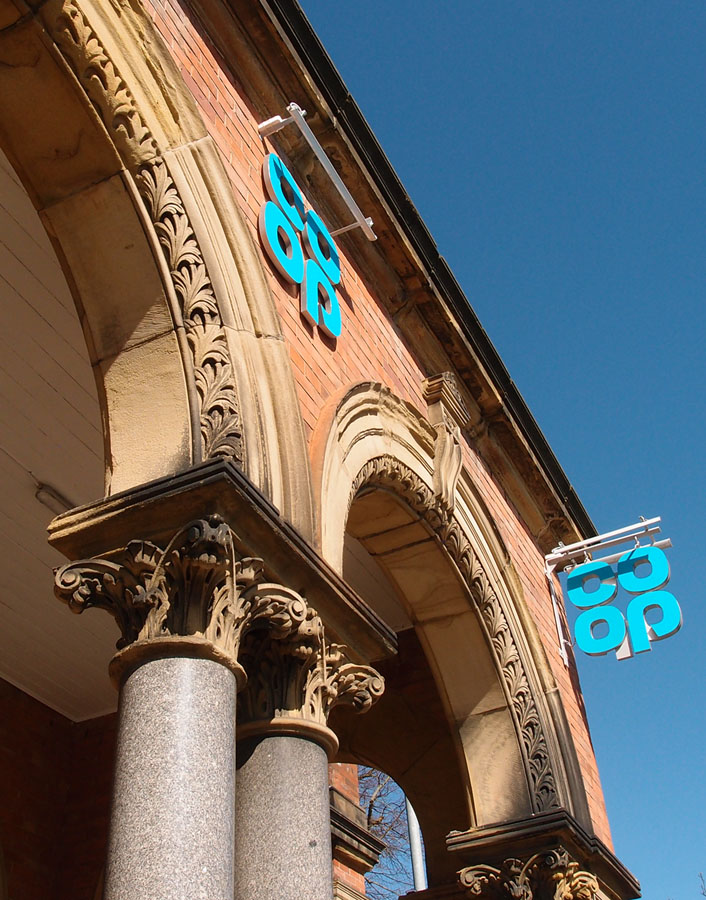 So here we are with a Co-op on Clarence Street. Which is nice. Well, I think so.

Because back then (2013), when it was first on the market, a Co-op is what I thought it should be, if it was going to be a retail unit.

Seriously though, I’ve lived close to this building for more than 20 years, have passed its boarded-up front doors so many times. Really nice, this spring, to walk through them, and to see this building so busy, with people coming and going. 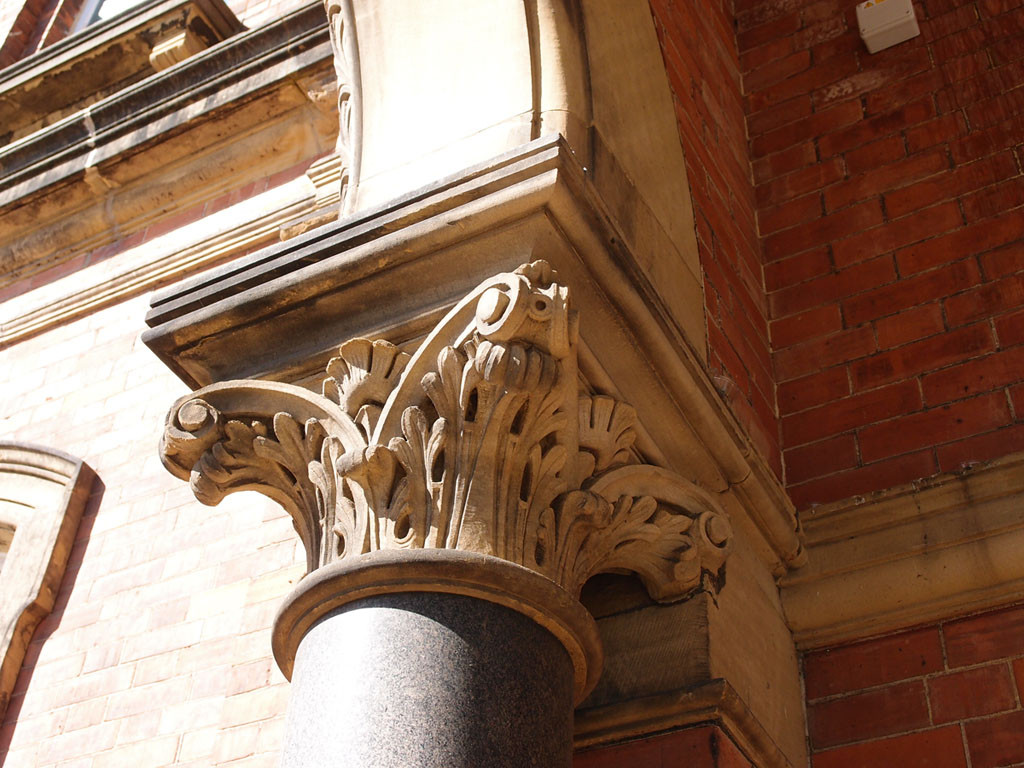 I know it would have been nice, in an ideal world, to see some of the more imaginative ideas for this building realised, for us all to be able to see the historic bits opened up rather than just preserved and boxed off above the shop part, but all things considered (and the earlier pages I wrote considered it all at length, for example here), many local residents seem pleased with the outcome. Perhaps not those who live on Union Terrace, where the delivery vehicles unload.

The store’s shelving has been fitted around the original iron columns. These have been repainted and are handsome and colourful: 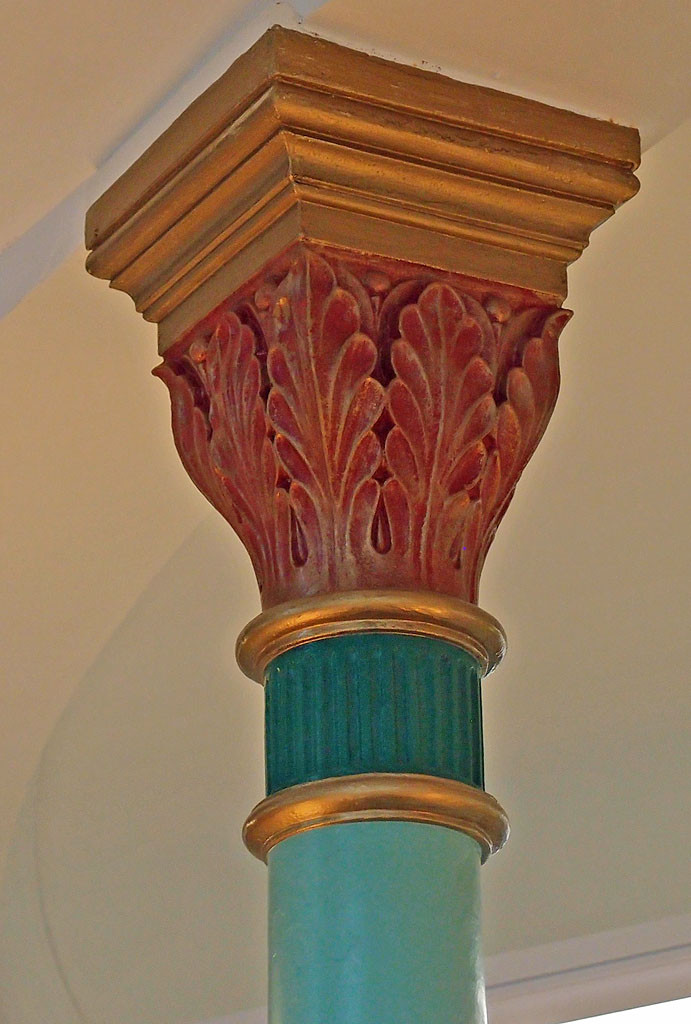 I first noticed them when the refurbishment was underway, when I stood on the low wall alongside the chapel to have a look at the interior (through windows made mucky by building work, so not the clearest image). 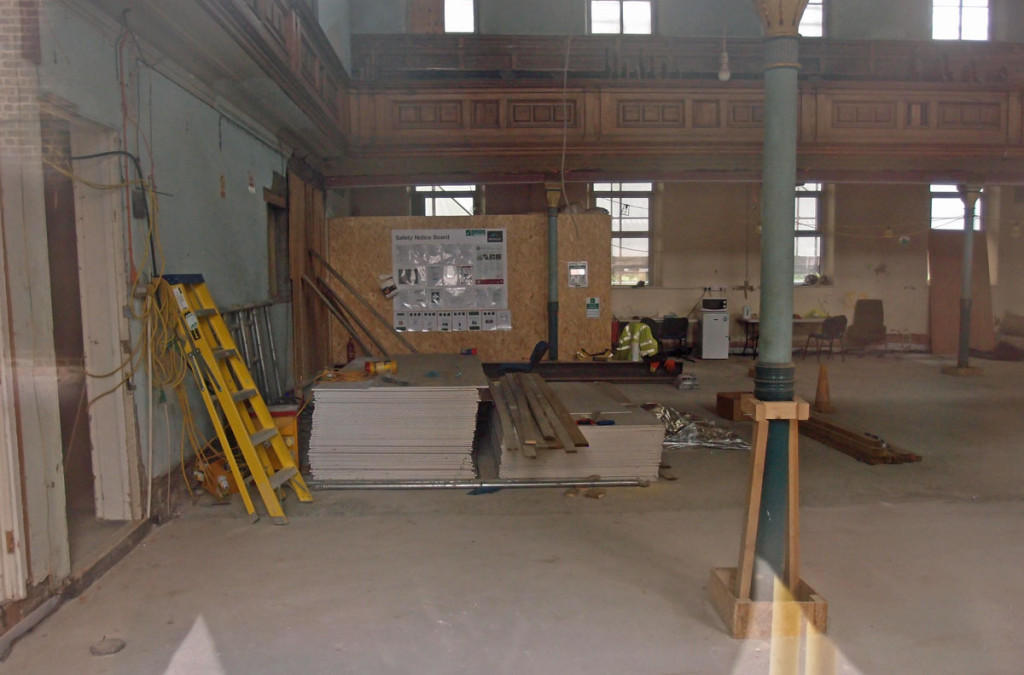 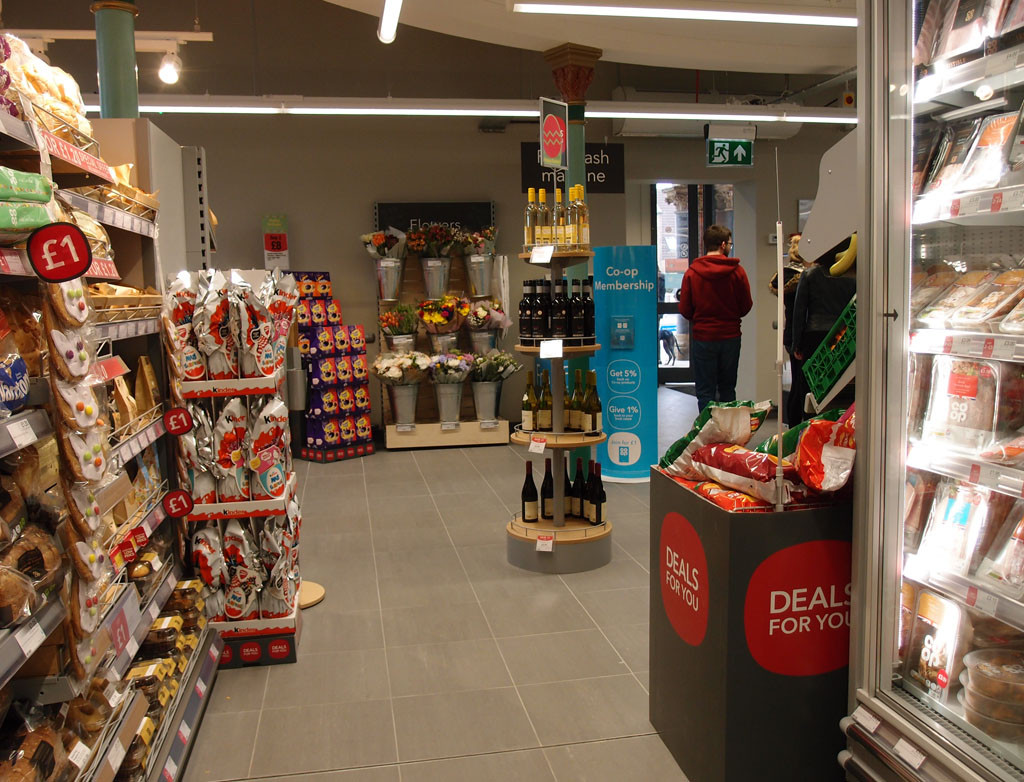 Having supermarket shelving around old iron columns reminded me of the old Jacksons supermarket at 25 Bootham, but here, thankfully, there seems to be a bit more space than there was in that shop, as I recall.

Another ‘then and now’ comparison … first, during the refurbishment, from Lowther Street, one afternoon in spring last year, as the temporary roof went up over the old failing slate roof: 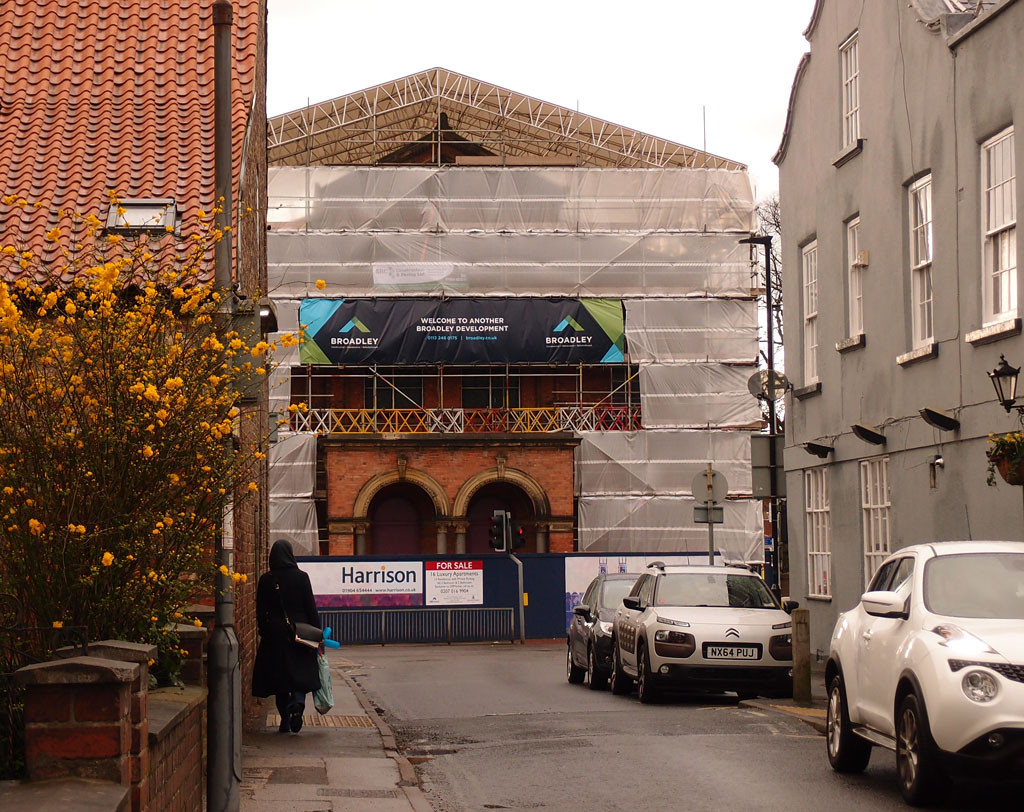 This view from Lowther Street gives some idea of how impressive the chapel would have looked when originally built as a place of worship, facing the area of terraced streets known as the Groves.

And one evening in spring this year, soon after the Co-op opened, under a repaired roof: 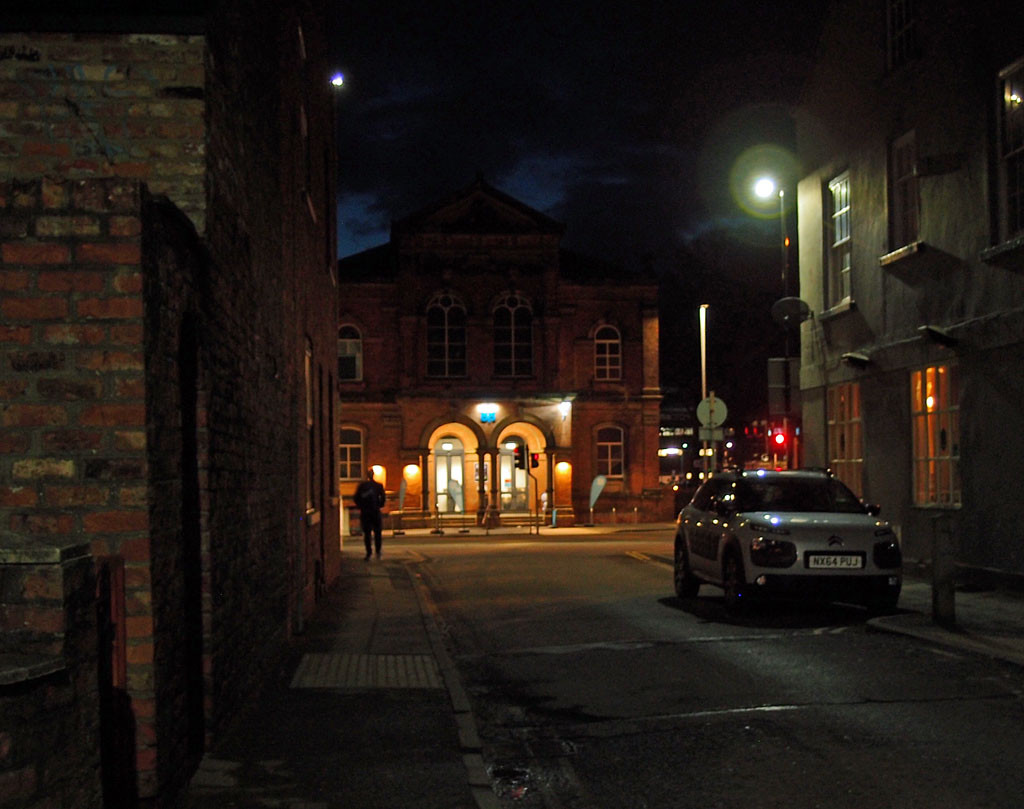 Looking rather welcoming, from Lowther Street. Now, in the 21st century,  bright lights and open doors and Co-op signs beckon across that broad and complicated junction where many roads meet. (Much quieter once, as this lovely old postcard shows.)

Recent York Press reports have referred to this redevelopment of Groves Chapel as ‘controversial’. I did my best to cover the various aspects of that controversy, back then. To me, the controversial part of this development was the marketing of the residential accommodation to the back of the chapel. As far as I’m aware local media didn’t give that any attention. 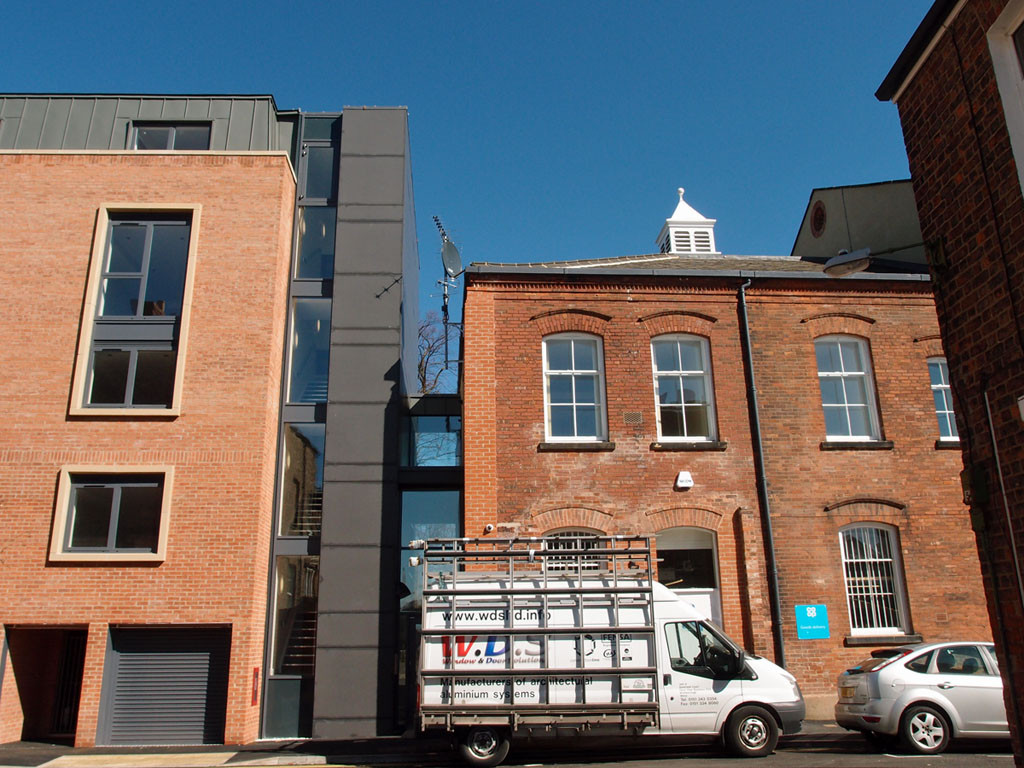 Old meets new: residential development at the back of Groves Chapel, from Union Terrace

Now, in early 2018, having shopped at our new local Co-op a few times, I can only report that it’s busy, popular, useful and welcoming, and that it’s nice to be going through the doors into a building that I’ve only ever known as a boarded-up front onto Clarence Street.

I’m not able to write about York here on these pages as often as I once did, it varies according to other factors. But as the above makes clear, I’ve been writing about York here on this site for a long time. (So long that I sometimes hesitate to link back to the very early stuff — at times now some of my observations seem a bit naive and uninformed/embarrassing. But then, we all have to start somewhere, and I was the only person doing that particular kind of continuing study/exploration of York on a website online back then, as far as I’m aware. Some of it is perhaps still useful.)

Since then there have of course been long gaps at times between additions to this website, because it’s just me, just one person, and sometimes other things are more important.

The monthly hosting fees still have to be paid, to keep online the hundreds of pages built up over the years, and the comments added to them.

If you’d like to express appreciation for that, or help pay the hosting fees, virtual coffees are always welcome. I appreciate your appreciation, and hope these pages continue to be of interest, as a record of York and its changes. I still add to them as often as I can. You can join the mailing list if you’d like to know when new pages appear.