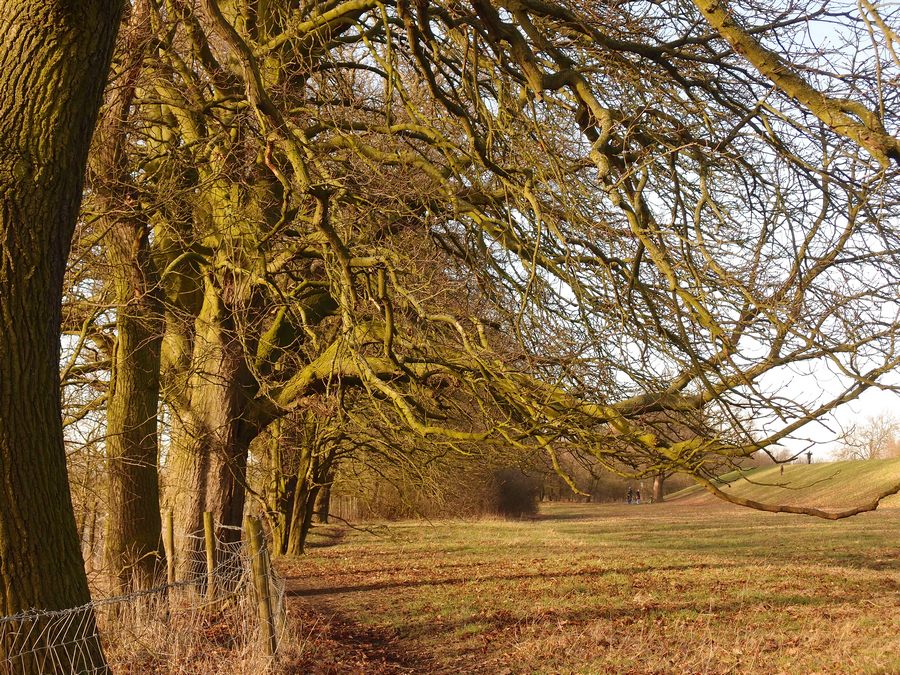 I’ve just been reviewing my reviews of the year, as we approach the end of 2017. These have taken different forms since I first thought they might be a nice addition, back in 2012, starting with just photos to illustrate each month and later expanding to include more text. This year I thought I’d include a selection of what I hope will be cheering or interesting photos, then follow that with some observations on what has happened to various buildings and with various plans over the course of this year, as looking back at this year’s archive of pages has made me realise what an interesting year it has been in terms of things I’ve focused on here on York Stories.

The photos, one for each month, never made it online at the time, though most of them were taken as possible illustrations for a half-planned page, as I haven’t been able to add to the site as often this year.

The first photo, above, was taken on a lovely sunny weekend afternoon in late January when the ings and Rawcliffe Meadows were full of people out walking and cycling.

Some charming green places within the city centre too of course, including the garden at St Anthony’s Hall on Peasholme Green. 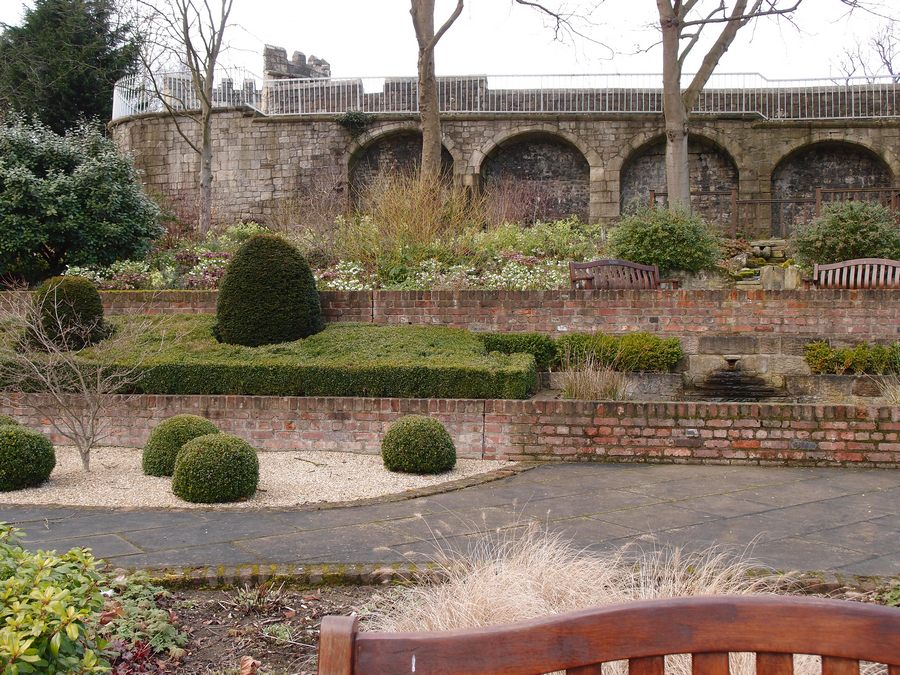 Back in the Clifton area, the splendidly colourful planting in Homestead Park, pictured here in early March. 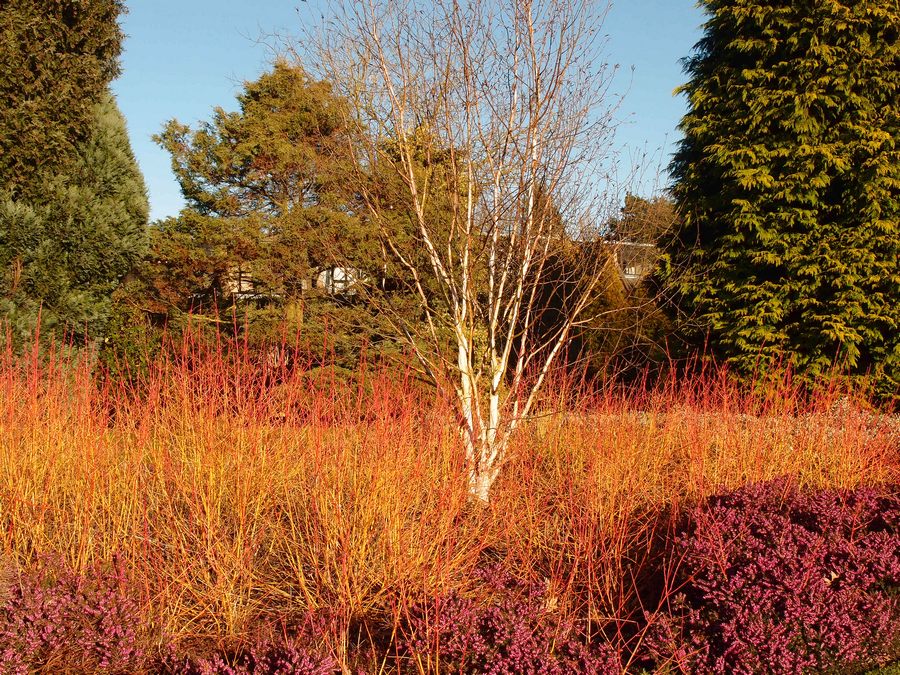 Another Rowntree gift to the people of York, and always beautifully maintained. I’ve written about it before, some years back. (A whole decade back, I realise, checking that link. Blimey.)

As we’re currently in the gloomy muddy days of late December I reckon what we need to see are some springtime lambs lit by evening sunlight, in April. So here you go: 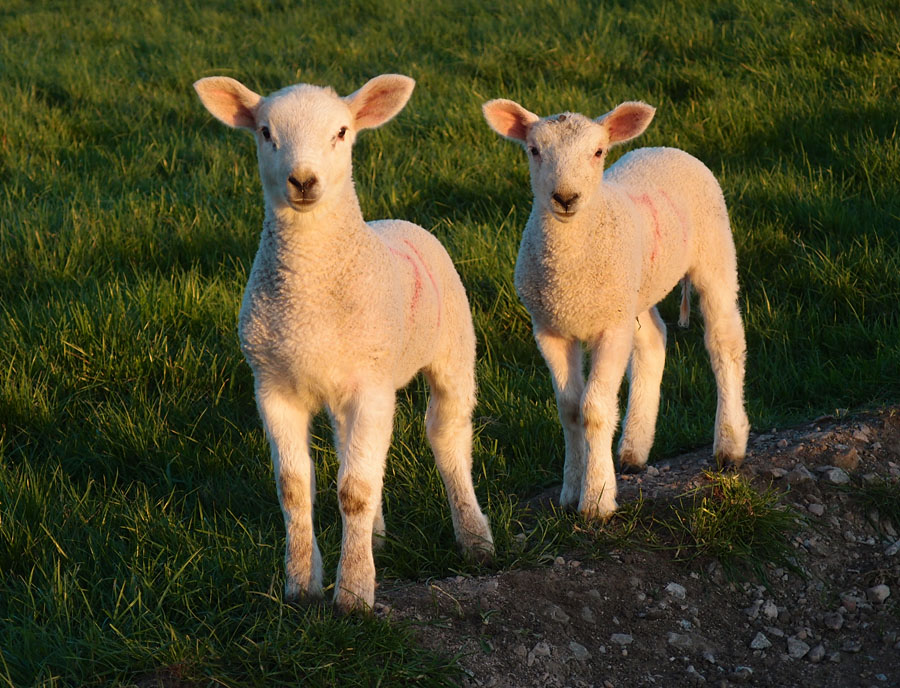 A very enjoyable walk past the church at Nether Poppleton and along part of the riverside, after catching a train from York station to Poppleton.

Another fine evening took me on a cycle ride to Fulford, to the Germany Beck development. I wondered if a wonderful old hedge I’d admired the year before was still there. It was. I spent quite a while taking photos here, trying to get the evening sun coming through its branches just right. 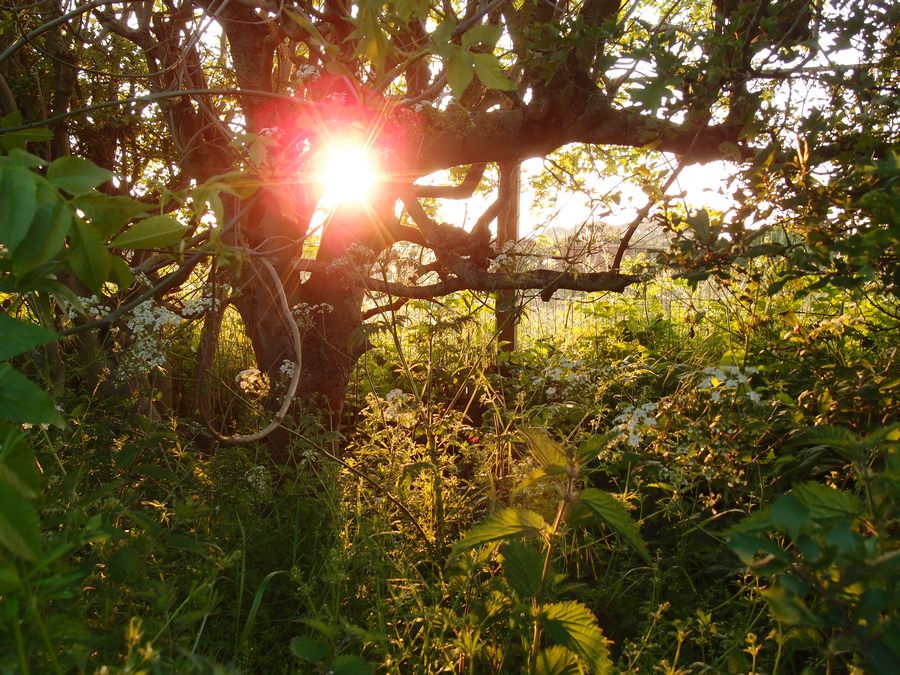 Old hedge alongside the Germany Beck development, 25 May 2017

And I hope it remains there, though the land nearby will be churned up and covered with houses.

Back in the city centre, one weekend in June, I looked out from the balcony at the back of the art gallery for the first time, over the area where the wartime hostel buildings used to be. 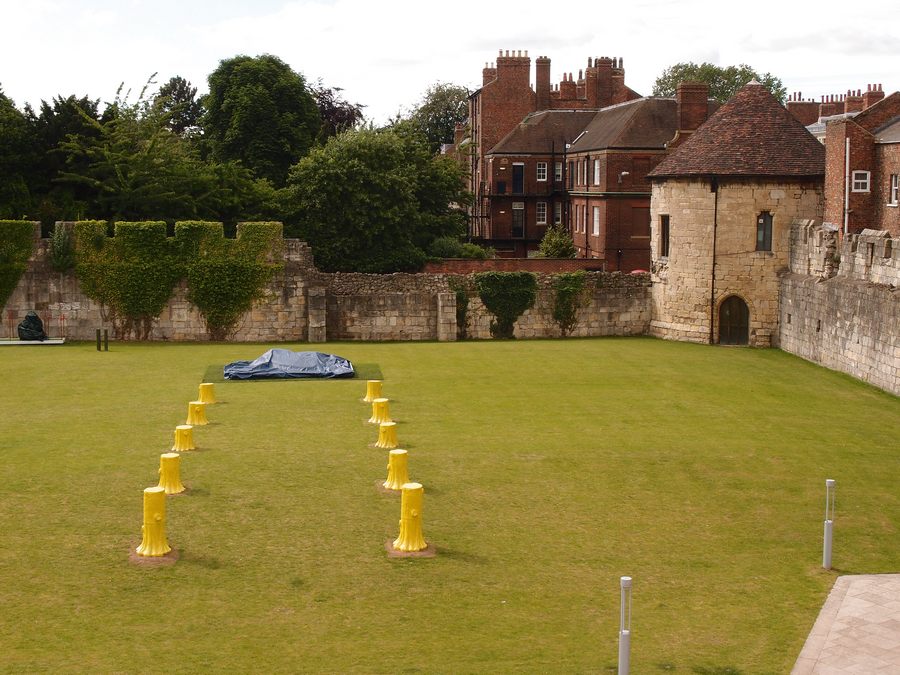 It was nice to have the opportunity, as a York resident, to visit the art gallery for free, on the Open Weekend for residents. The first time I’ve been since the refurbished gallery opened and charges for entry were introduced. I hope that the Open Weekend is going to be an annual event.

Since I’ve been taking photos of York and writing about it here on these pages many new buildings have appeared. One of the most interesting areas of new build is in the Hungate development area, off Stonebow and Peasholme Green. I’ve written about the area many times, and viewed the new buildings from the front. But it was only this July that I got around to walking round the back, along a path through a green area by the Foss, emerging at the end to this view, which I found rather pleasing. 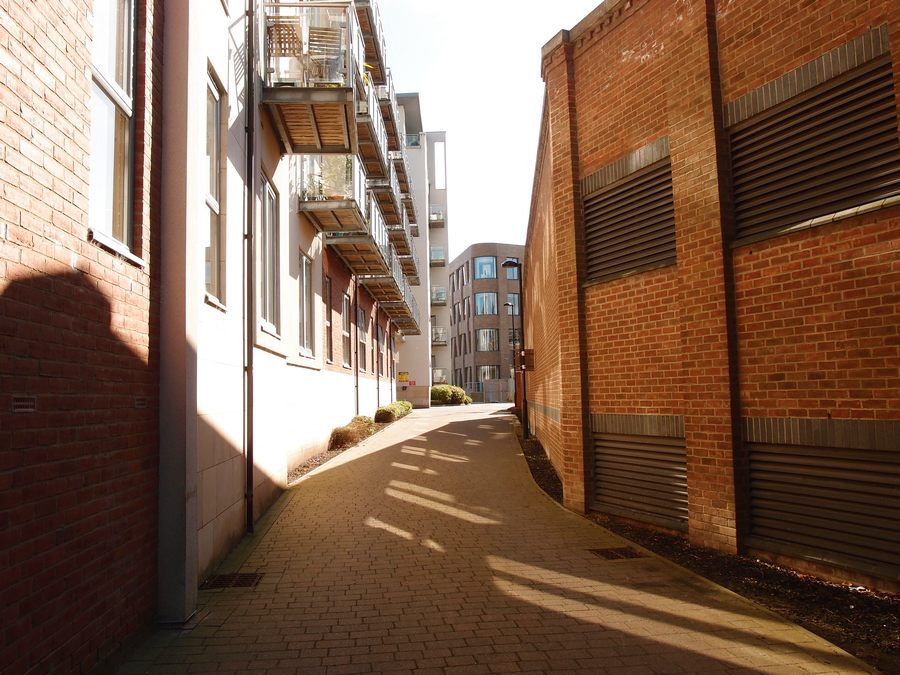 We’re looking towards the back of the Hiscox building. Apparently this new little street is called Black Horse Lane. A nice bit of streetscape, I thought.

Rather less successful, when I visited it in August, the recently constructed section of path by another bit of the Foss, further out of town. 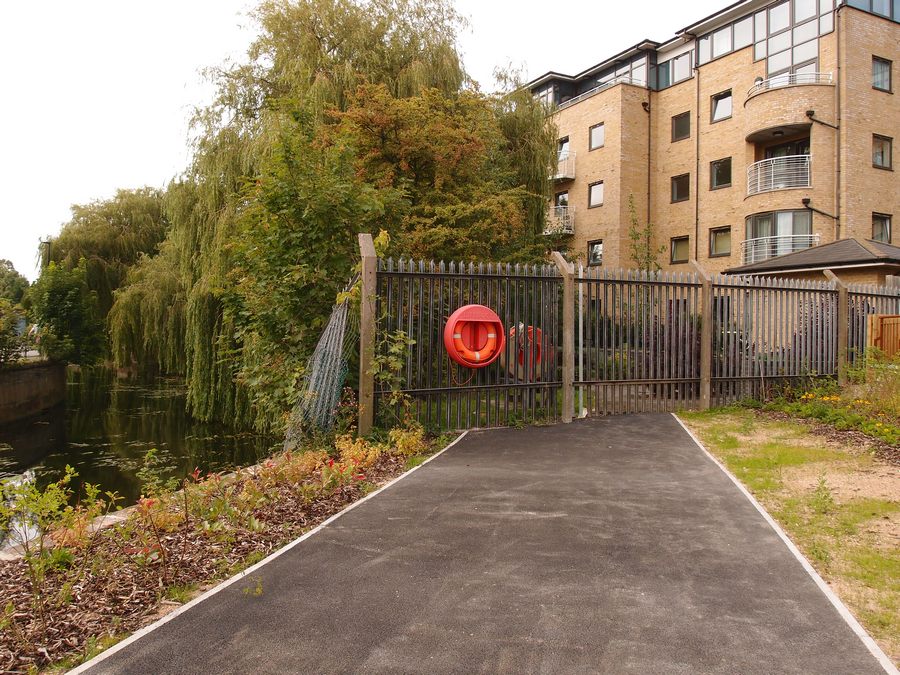 It’s behind the new hotel on Layerthorpe, and is as I understand it meant to be part of a riverside walkway. It might since have been connected up with the bit on the other side, but the two bits of tarmac path didn’t quite meet, and rather more importantly there was a big steel fence between the two sections. I hope the situation has since been resolved, otherwise it’s a rather pointless bit of path.

Let’s dash back to Homestead Park for the September photo, and look at something nice. 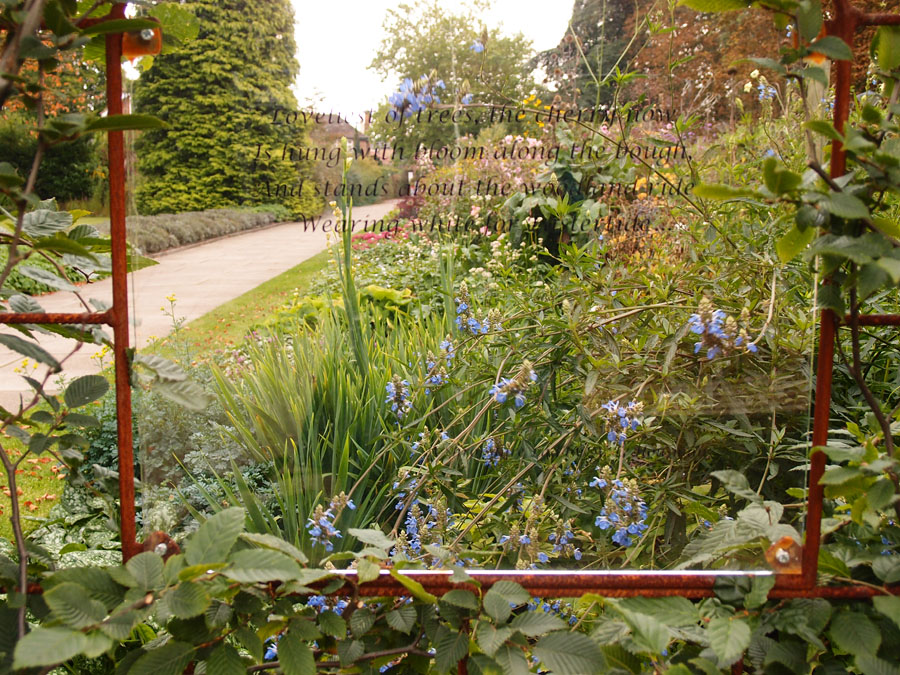 From a quiet and peaceful place to something a bit more noisy. 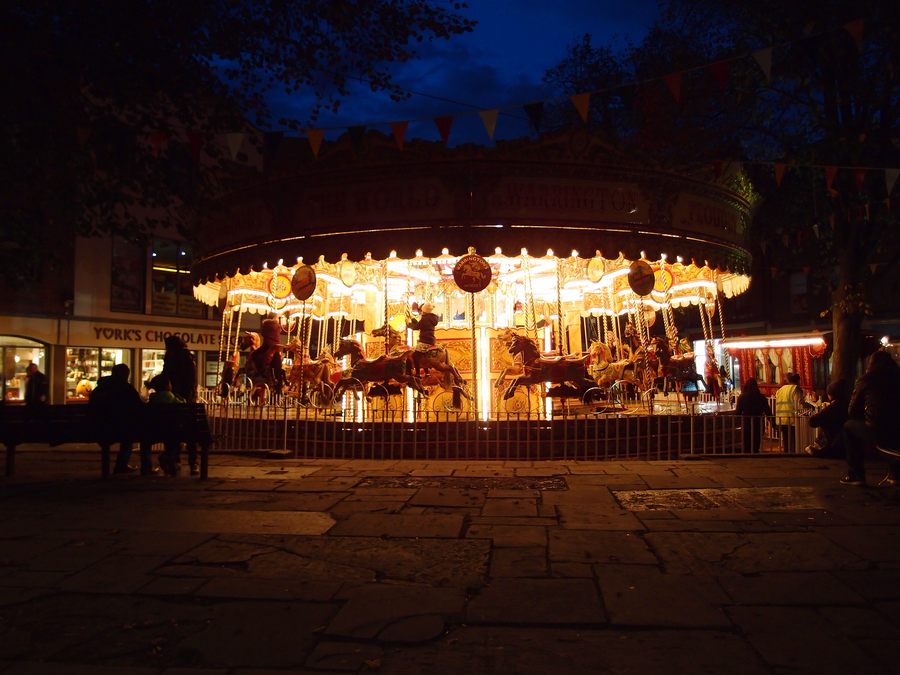 This carousel appeared in King’s Square in late October, for a week or two. One evening on a dash into town to the bank I encountered it when emerging from the end of Newgate into King’s Square, and loved the way the light and noise filled the space. I’ve seen the same carousel in other places, but it’s never seemed as cheering and joyful as it was when in King’s Square. I made a little video clip too, so you can hear the children on it laughing.

In November, on Remembrance Sunday, I called in to Holy Trinity on Goodramgate to look for this memorial, after receiving an email about it. 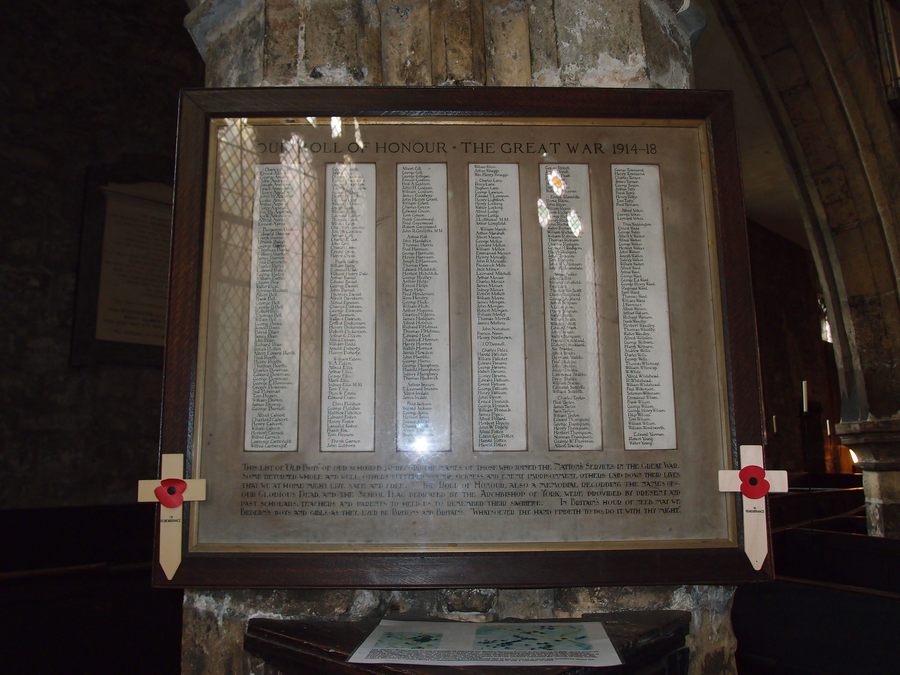 Accompanying information explained that the Bedern Boys listed on the memorial all attended the Bedern National School in the run-up to the First World War. Volunteers are attempting to identify all these men and find out more about what happened to them. (Contact Becki on volunteers@holytrinityyork.org.uk if you can help.)

Looking back on the year, over my archive of pages, I can think of several rather cheering things, from the point of view of this particular observer of local goings-on, changes and plans and planning applications.

In this year, back in March, plans to demolish interesting buildings of local heritage interest on Ordnance Lane were abandoned. Excellent news.

A site was chosen for the new mental health facility to replace Bootham Park Hospital. Plans were submitted, and approved. The new building doesn’t involve demolishing any heritage assets, and is located on a brownfield site in a green and pleasant setting.

Work has begun this winter on the Community Stadium site. Yes, it’s been a long time, and I can’t quite believe it either, so let’s re-emphasise that: work has begun on the Community Stadium site. Not something I’ve written about this year, but I’ve attempted to tackle the subject in the past, and I know that many football and rugby fans are very pleased to see signs that actual construction is soon to begin.

Plans to replace the dated and difficult Scarborough Bridge pedestrian part with something more accessible to all pedestrians and people using two wheels seem to have moved on to the point where it looks more likely to happen. This is a genuinely exciting thing and long overdue. While compiling this page I’ve checked the online planning portal and can see that there’s an actual planning application, submitted just before Christmas. Fantastic news. More on this story later, perhaps.

The original (rather crass and destructive) plan to put the York Central access road in from Holgate Road has had a rethink and a public consultation, and a route in from Water End is now preferred, as reported in the Press. Presumably as a result of public pressure and ardent campaigning (and perhaps also a different council administration … ?)

The work done by the Castle Gateway project has been another highlight of this year. Personally, because of other concerns and commitments, I’ve not had any input into it beyond writing pages prompted by it, but it has been so pleasing to see so many views gathered and so much good work done, proper interest in remodeling the area in as wise and sensitive a way as possible.

The Carlton Tavern decision earlier this month was a cheering thing indeed. On many levels.

And a minor detail, and heard rather than seen, and I’m not quite sure when it was exactly during this year that it started again — the Minster bells ringing on Tuesday evenings, the weekly practice happening again, after difficulties and silence for a time. I hadn’t realised just how much I missed that sound until I opened the back door one Tuesday evening and heard it again, faint and far away, but reaching far, as it always does.

We can look back on the year of 2017 from various angles, and personally for me it has been quite a difficult one at times, in recent months. But here we’re focusing on York, this particular place, and its heritage, and its green places, and what makes it the place that it is. There are good things happening everywhere, including in small ways, energetic groups of residents working hard to make things better, to improve their local patches.

On the previous page, a few days back, I left you with too many images of mud in the Museum Gardens. I felt a bit bad about this. So went back, lifted my head up, and looked instead at the late afternoon sun on St Mary’s Abbey. 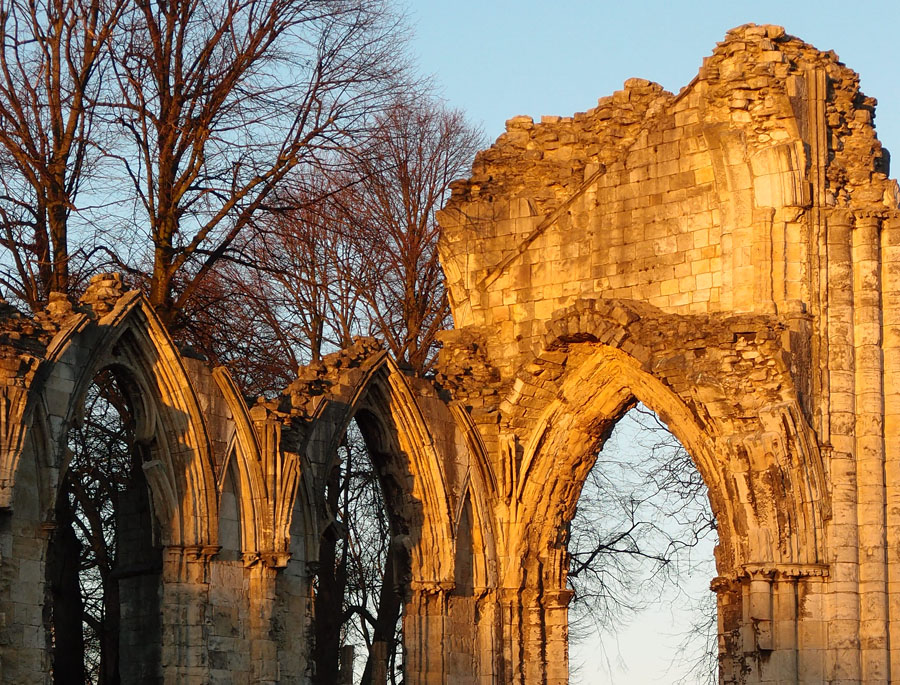 All best wishes for the new year, dear readers, and thank you for your continued interest in York Stories.

If you’re curious about where some of the photos were taken, can’t quite place them, there’s an accompanying Google map.