Ebook: When the suburbs burned 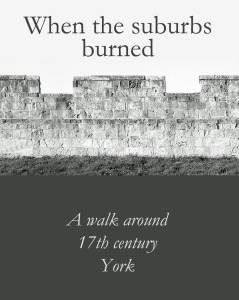 From York’s abbey walls and a wonky tower on Marygate, to its city walls, to buildings remaining to remind us of the siege in 1644, past places where the king once played The Balloon and where his printers printed pamphlets, meeting a hero we’ve forgotten to remember and his son-in-law the unfortunate Villiers. Saddened chaplains and other observers guide us on our way.
Includes map, photos and illustrations.

Available from amazon.co.uk and amazon.com.

I can thoroughly recommend it for making a complicated period intelligible in the context of the city and the visible evidence that remains.
— Andy Tuckwell

Yet more “hidden” history that shaped this great city. I took the lazy way and read in the comfort of my own home, picturing the streets I’ve tramped over the last 20 years but with a siege back drop I’d never appreciated. Having done that, I’ll be back on the street for a second look at the detail I’ve missed. I’d recommend this to visitor and resident alike.
— Colin Durrans

This is a little gem of a book. Evocatively written, it transports you back to the time around the siege of York, colouring in characters, places and events to help make the period come alive. Highly recommended to anyone with even a passing interest in York or the Civil War.
— Lee Thurston