Rougier Street and All Saints Lane 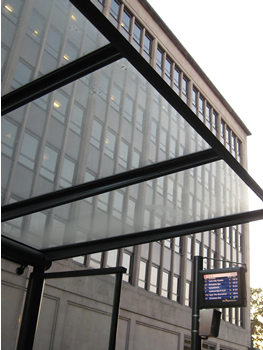 After admiring positive and inspiring changes to buildings on Wellington Row and Tanners Moat, I’ve continued my wanders. Around the corner we enter the gloomy canyon known as Rougier Street.

But please don’t leave yet – we end up in a charming old alleyway.

I was rather struck by the image of this office building through the glass roof of the bus shelter … but otherwise it’s a bit grim down here. The light is all swallowed up on this street.

There are many reasons York is special and provokes the emotions it does, but one of them is that most of it feels like it’s on a human scale. In the medieval/historic centre the only building that makes you feel really overshadowed by its massive bulk is the Minster, and you don’t mind being towered over by that, as it’s all pale and beautiful and intricate.

Here on Rougier Street you’re overshadowed by gloom and concrete. And possibly brick – I don’t know, I always rush down it as quickly as possible to escape its hideous soulless gloom.

But at its bottom end, where it meets George Hudson Street, there’s hope of salvation.

There’s Club Salvation, painted black, and in case that doesn’t save you, Bar Salvation.

They’re both ugly too, sadly. 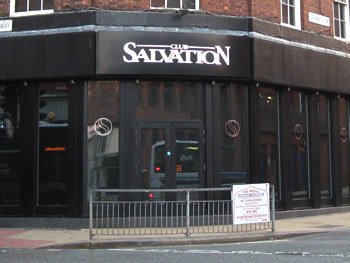 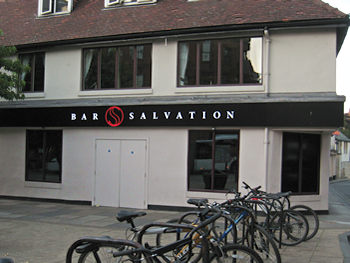 Bar Salvation used to be the Grob and Ducat (aka The Grobs), and I remember watching Bruce Springsteen’s ‘Dancing in the Dark’ on its then new and exciting video jukebox, and Madonna cavorting around in a gondola doing ‘Like a Virgin’, on the same. Perhaps other things were on it – I guess so – though it was the mid-80s and we had lower expectations then, so perhaps it was just Brucie and Madonna on endless repeat.

The other notable aspect of this depressing street is that it is full of buses. Elsewhere on this site, in one of its less-visited corners, I can offer you a historical view (1980s) of the wall of the Grobs, with 80s graffiti, and many more photos of buses in Rougier Street.

Back in the present, on the 21st century evening I visited, the club and bar were closed, so I didn’t find out if they really did offer salvation.

Nipping down the side of ‘Bar Salvation’ and taking a quick right turn down a narrow opening between buildings takes you to All Saints Church. And to one of my favourite corners, a narrow lane leading to it. Churches have been, of course, more traditionally associated with salvation. When I came out for a walk I wasn’t looking for salvation, I was just looking for some photos, but having experienced the peculiarly depressing effect of all that gloom and black paint on Rougier Street, I could almost have converted from my agnosticism, had the church been open. 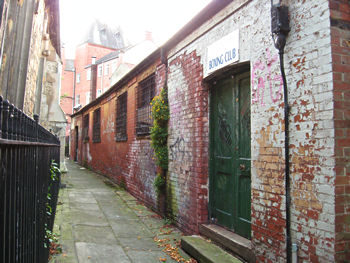 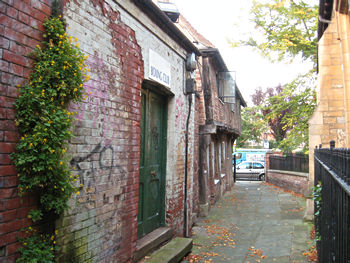 This alleyway is alongside All Saints, a church with a spire that glows in midsummer evening sunlight like it’s pointing the way to heaven. But for now I’m checking on the alleyway down here, and whether anything has been done yet with this rather charming building, once a boxing club. All alleyways should look like this one does. There’s a fabulous specimen of a yellow corydalis – one of York’s most successful weeds – growing out of its old brickwork. On the other side is the church, and just along from it, proper historic medieval buildings, now rather stranded, with the medieval neighbours long gone, and instead another huge out-of-scale thing plonked on the riverside across the road (was the Viking Hotel, now has some other name, still charmless).

Still, down this alleyway it’s proper York. A mix of deeply historic and significant buildings, listed and admired, and a place made of brick, with bits of utilitarian pipe sticking out of one end at a jaunty angle.

Though nothing’s changed much down this alleyway, there have been changes nearby in Tanners Moat and Wellington Row.