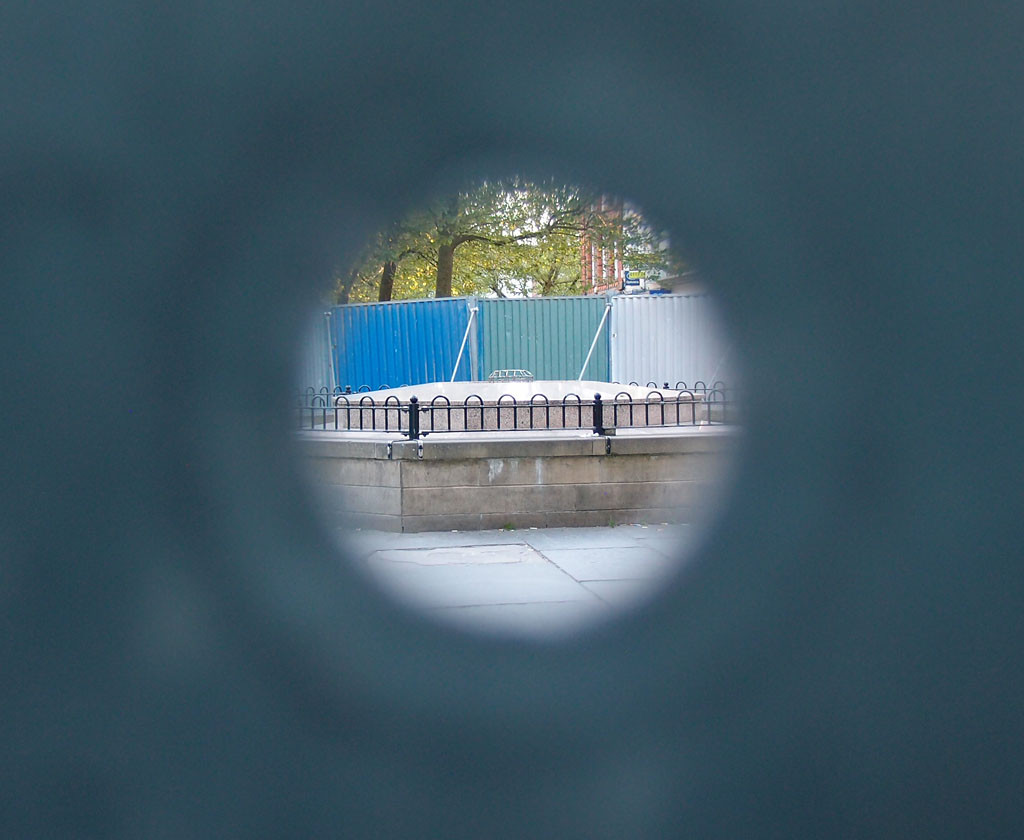 Through a hole in the hoardings, the Parliament Street fountain, 14 May 2018

After much debate and discussion, much controversy and delay, the Parliament Street fountain is now being demolished. Recently, when the hoardings went up around it, I wandered up that way, and also visited another fountain in the city centre, which may be restored. More on that below.

I’ve written about the Parliament Street fountain a few times in the past, as the issue of its possible demolition raised some interesting questions. Now that demolition is taking place the main question is what might go there instead.

Nothing, I hope, at least not in that exact same place.

On my recent wander I approached it from Market Street — the street that goes up from the corner of Coney Street and Spurriergate, with Feasegate branching off it about half way along, and continuing on to Parliament Street. 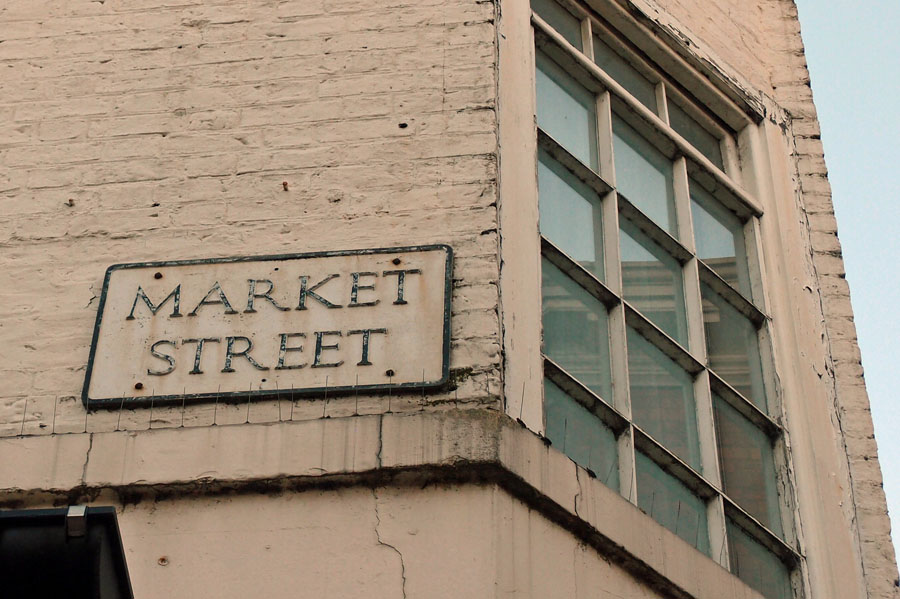 Approaching from Market Street seemed to re-emphasise, as I thought it might, my previous perception of the fountain as ‘a thing in the way’, at this meeting of roads.

More of a thing in the way than usual, at the moment, with the hoardings around it and the wider area around it. 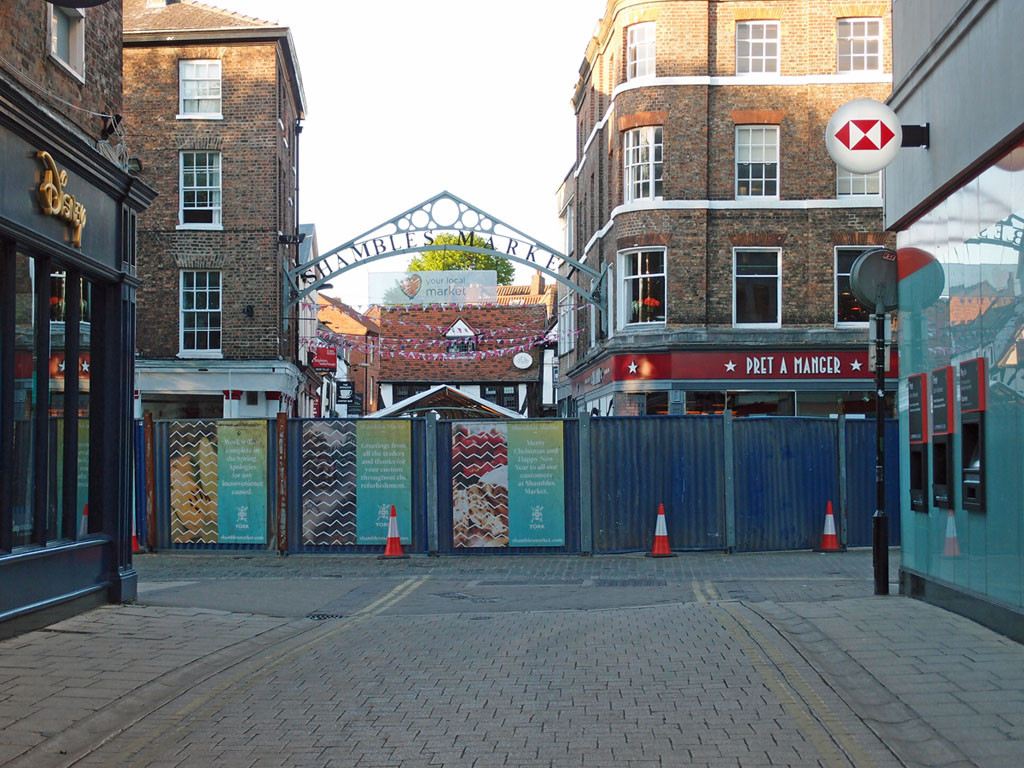 Hoardings around the Parliament Street fountain, 14 May 2018

Just beyond that is the entrance to the expensively refurbished market, now known as Shambles Market. A large metal sign spans the Jubbergate end of it, and another banner sign below urges us to love our local market.

Directly below that, on the evening I passed by (in mid-May), the prominent but rather grimy panels on the hoardings wished ‘Merry Christmas and Happy New Year to all our customers at Shambles Market’. 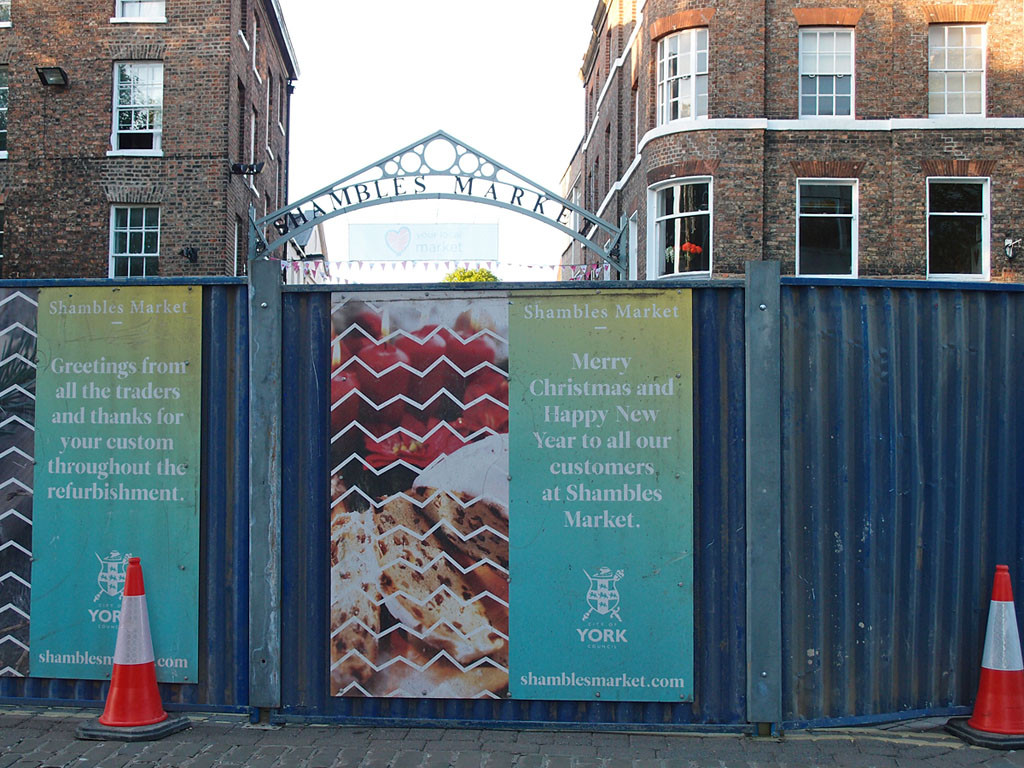 Hoardings around the Parliament Street fountain, 14 May 2018

Thankfully they have since been removed, as they looked a bit daft.

A brief wander around the perimeter of the fenced-off fountain revealed small round holes in the hoardings, forming a pleasing frame for these last views of it, a day or two before its removal. 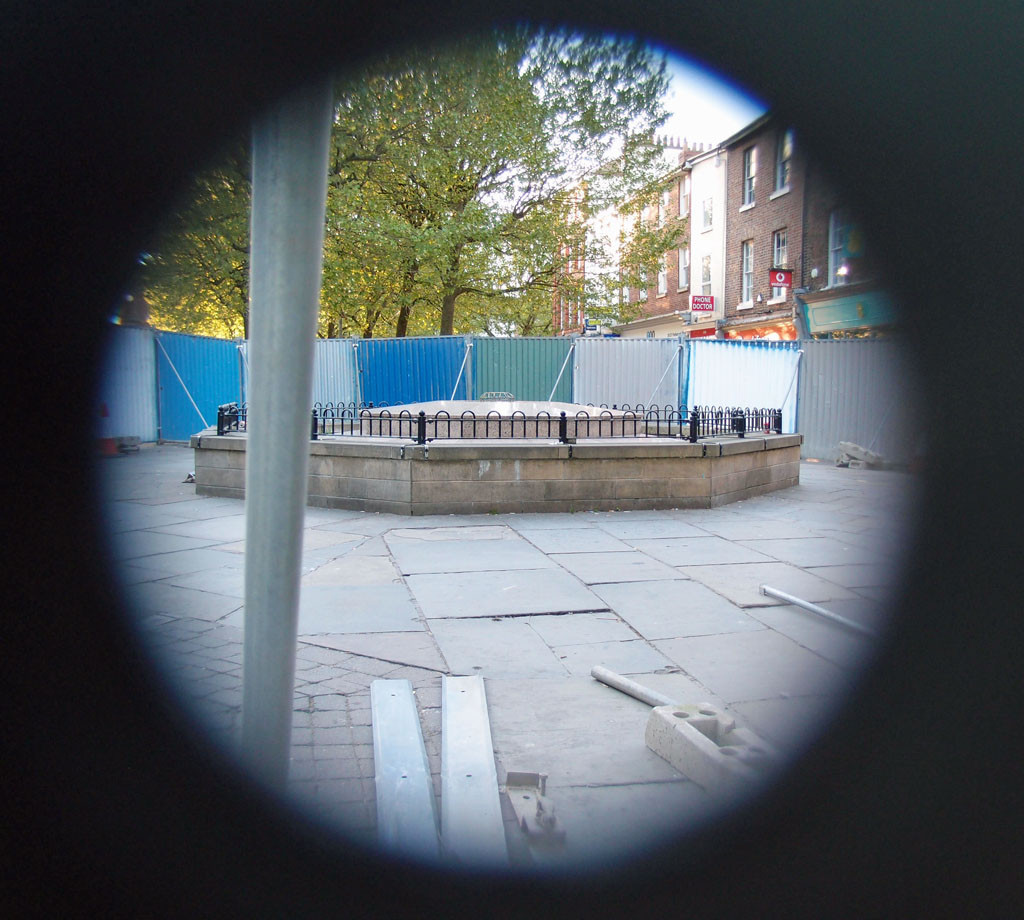 The soon to be demolished Parliament Street fountain, 14 May 2018

There are, I know, many people who felt very fond of the fountain — even though it hadn’t done anything fountain-like for years — and many people saw it as an important meeting place.

Personally it doesn’t have that significance for me. Mainly, as I’ve said before, it felt like a thing in the way, when I approached as I often do from the market area down Jubbergate to get to the bank on the other side, or headed across to Market Street to get to Coney Street.

Here’s a view from that perspective. 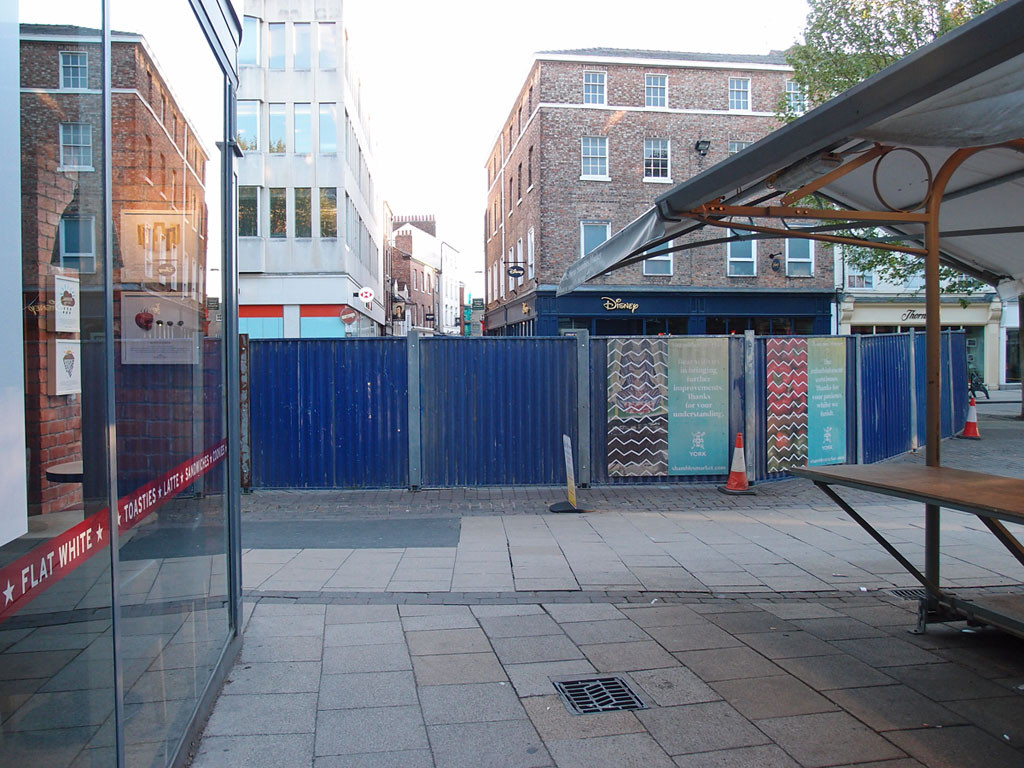 View from the Jubbergate entrance to Shambles Market, across Parliament Street, towards Market St, 14 May 2018

Obviously the hoardings take up a bigger area than the fountain did, but I hope it illustrates the point.

To me, it’s a junction, a place where roads meet, and anything in the middle of it is an obstacle. The old fountain perhaps a bit like a roundabout for traffic, with pedestrians in a hurry having to slow down and join the traffic moving around it.

I lived in York for decades before I realised that Jubbergate had a name. When I realised it did, that seemed ridiculous for such a stumpy short bit of street. All makes sense though when you realise what the creation of Parliament Street entailed, how it cut through and cleared. Here’s the 1852 map: 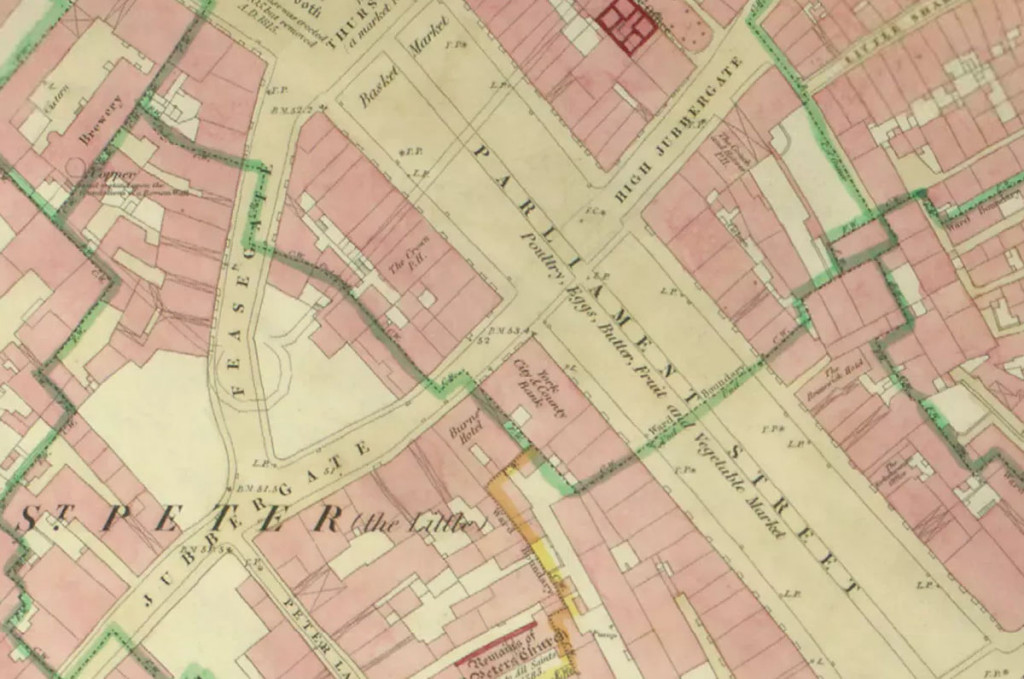 Note how long Jubbergate used to be. Part of it disappeared with the rather brutal cutting through of Parliament Street in the early 19th century, but you can still see its line clearly, marked Jubbergate and High Jubbergate on this map. At some point later the longer section was renamed Market Street. A name that made sense as it led to the main city marketplace, on Parliament Street.

But of course in more recent decades the city’s main permanent market hasn’t been on Parliament Street, but shifted to one side in an area between Jubbergate/Newgate/Shambles. Its most obvious entrance — the Jubbergate one — is still opposite the end of Market Street. Just that for the last couple of decades there’s been the structure of the fountain there in the middle, between the two.

With the obstacle of the fountain out of the way, it strikes me that it would be better to use the natural flow of the streetscape we already have, a street called Market Street, on the line of the old Jubbergate, leading to part of the current market place on what’s left of Jubbergate. There’s always a flower stall at the market’s Jubbergate entrance, a far more attractive sight, I reckon, than the shiny marble and strange little railing of the disused fountain structure.

The old fountain, in recent years, served mainly as a seat. Benches could replace it on either side of the space it once occupied, taking the line of the old Jubbergate, emphasising it, leaving space for Jubbergate to take the line it used to.

The old fountain was of the type intended to provide water for looking at, purely decorative. If anything is going to replace it as a permanent structure then a drinking fountain would perhaps be a good choice instead (but placed to one side of the old Jubbergate line).

There has been talk of statues, etc. If the demolished structure has to be replaced by anything then a drinking fountain would be far more useful, far more 21st century … and it would also mean that the people who used to say ‘Meet me at the fountain’ could still do so. Seems obvious to me.

Which leads me on to … 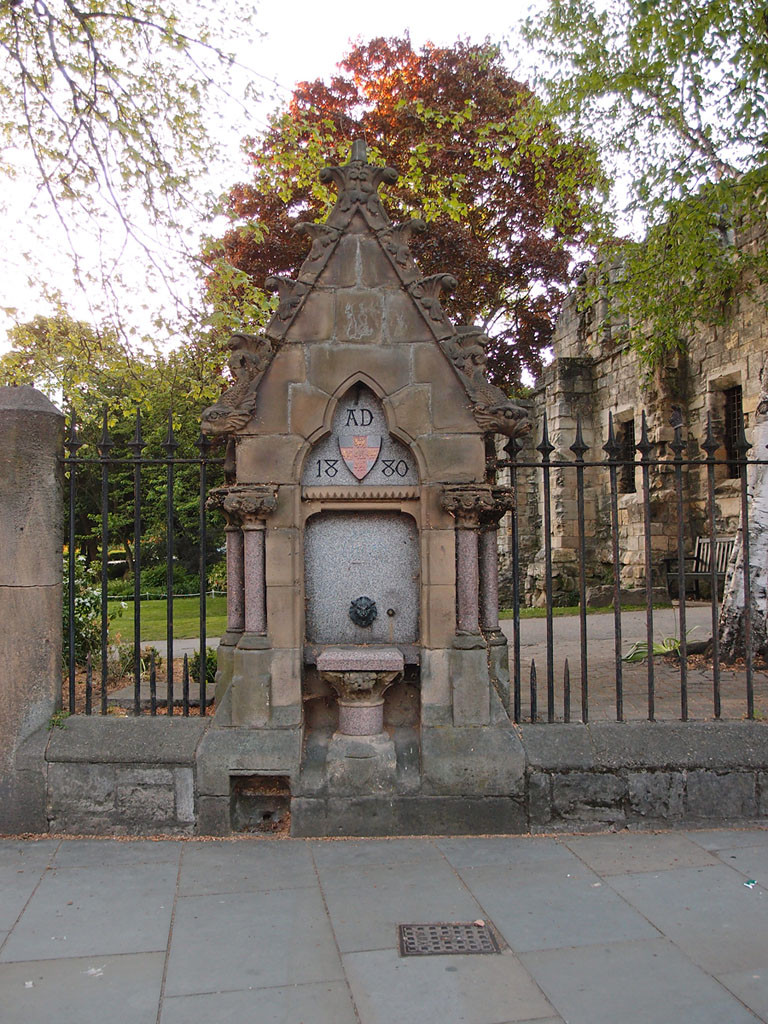 The old drinking fountain on Museum Street, on the perimeter of the Museum Gardens, is something I’ve often admired, and been interested in, and wondered why it has been left for so long as a non-operational structure. I wrote about it some years back, and just assumed that drinking fountains are a thing of the past. Then not long back I read that the Civic Trust had restored a drinking fountain on Acomb Green, which sounded very interesting, until I realised that it had only involved repainting, rather than getting the thing to work again and be useful (I’d rather it had been left alone, rust and patina and natural weathering and all, but that’s just me perhaps).

But this drinking fountain on Museum Street, it looks like it could perhaps again provide water, as it’s on a list of projects the Civic Trust is considering. 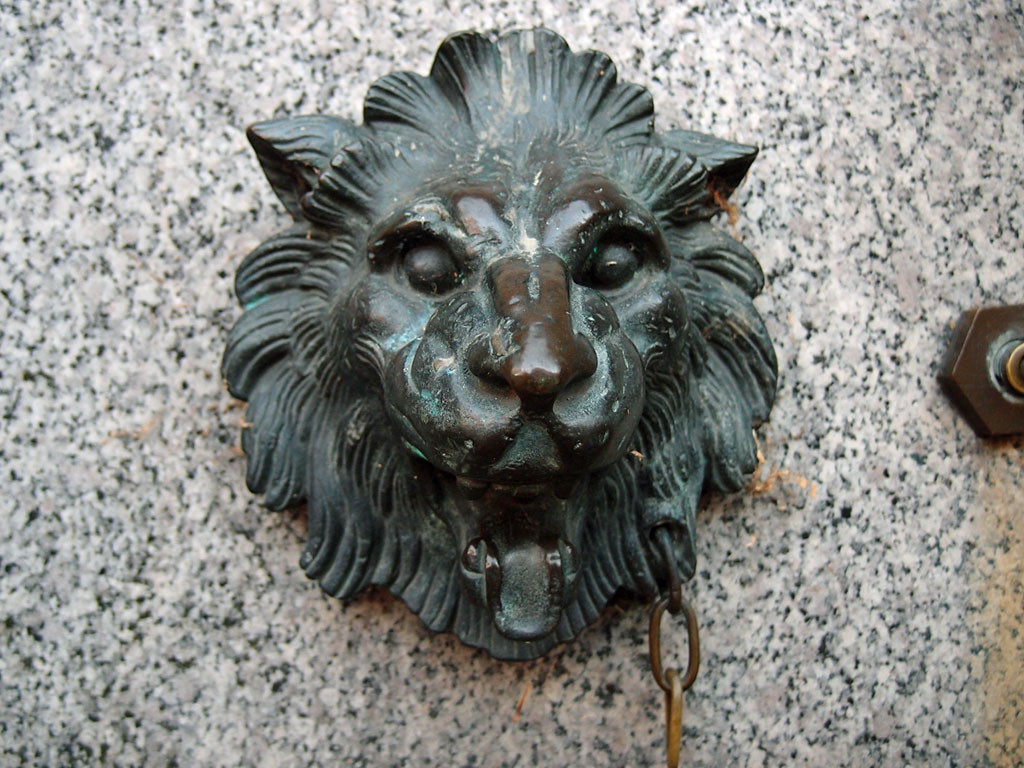 York Civic Trust would like to restore the drinking fountain in Museum Street to good working order. It is a Grade II listed structure dating from 1880 originally sited in Library Square, it’s been derelict for at least 30 years and we wish to restore it to working order, in particular to meet current Government initiatives. One of the lion head’s need replacing. Estimated cost £6,000.

There’s an opportunity to vote for this, if you’d like to support it. More details on this link.

But don’t go yet … a few more photos and thoughts follow.

It’s good to see that the Civic Trust has opened up its ‘city enhancement’ project to public comment. It might be nice to have a functioning drinking fountain on Museum Street. I think I vaguely remember it working, in the 1980s, but I’m not sure. 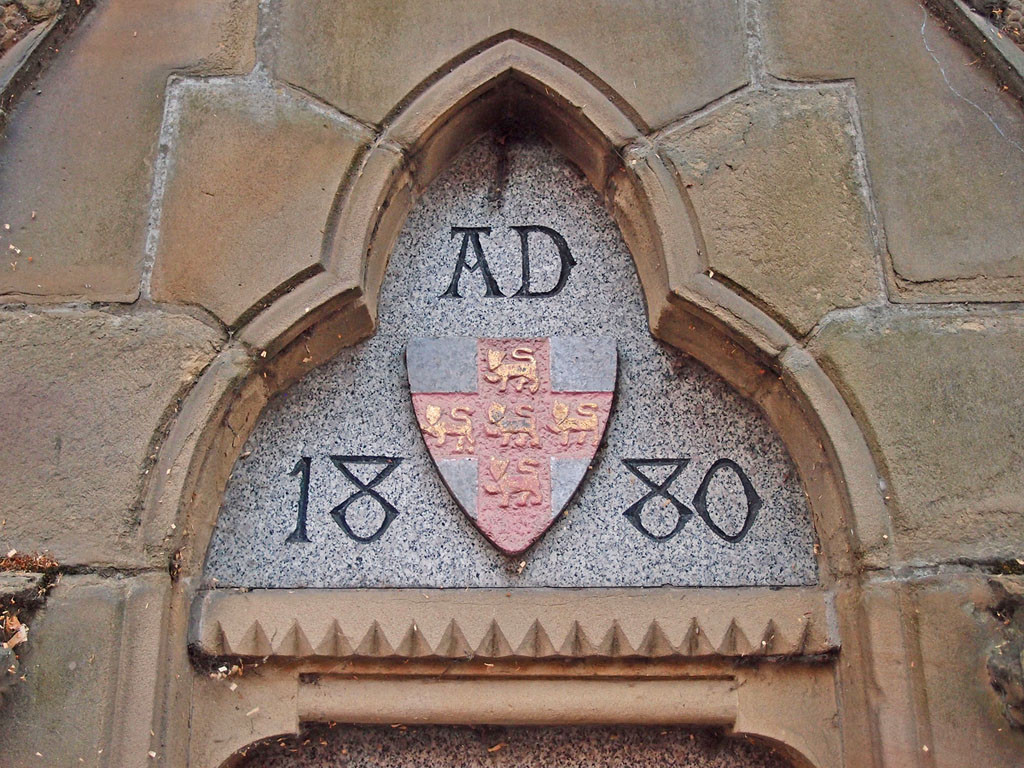 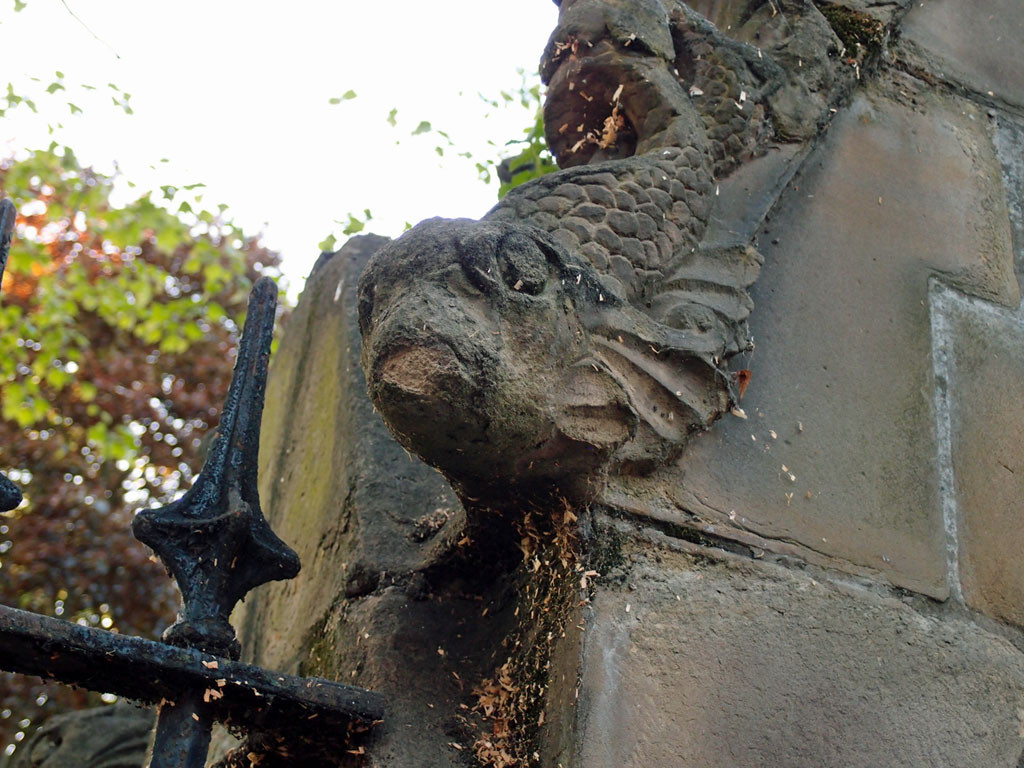 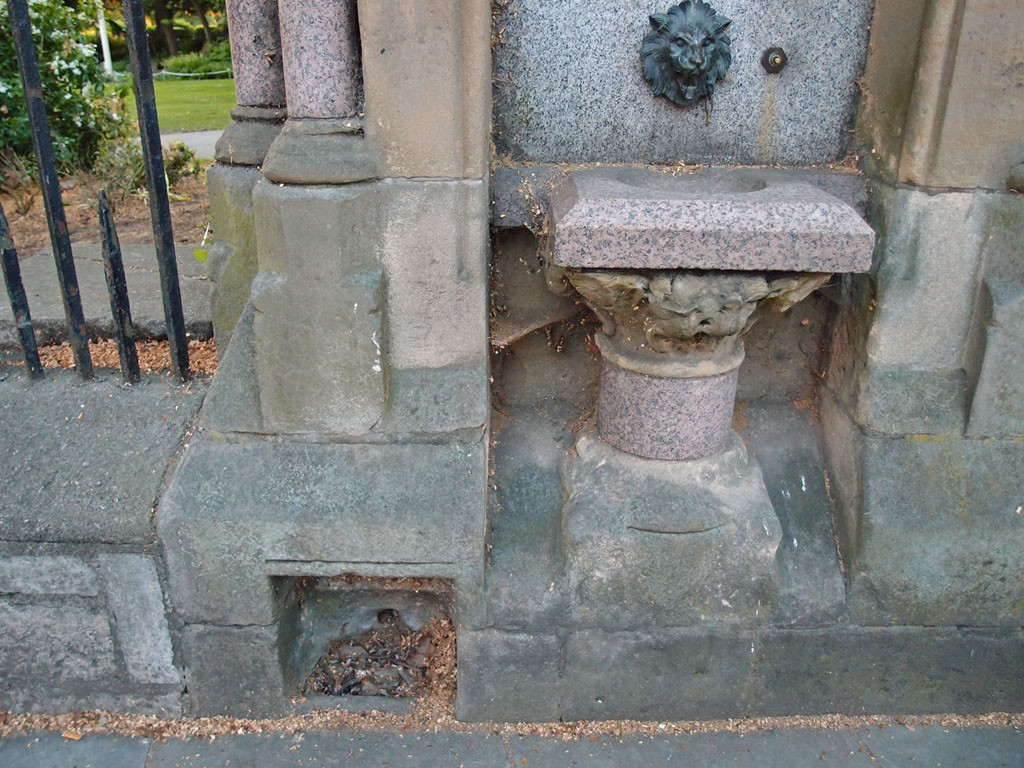 Such a practical and useful thing, and if other cities can manage to have functioning public drinking fountains then presumably York can too. A restored one on Museum Street, and perhaps a new one on Parliament Street … ?

As I’ve mentioned before, I’m not able to add to this ‘resident’s record of York and its changes’ as often as I used to, because it takes a long time to write original content and take the photos to go with it, and these days it has to fit around other more important things. This page, for example, has been in draft for well over a week. A half-written page on something else is still sitting in draft form from some time before that. But if you like what I have finished and published, and all the things you can read here, old and new, going back many years, you can support it, and me, with a virtual coffee (or indeed several) and that’s always very much appreciated.

By Lisa @YorkStories • 24 May 2018 Details, Opinions, thoughts, Streetscape
Tagged  fountains, Parliament St
To link to this page's proper location please use the > permalink