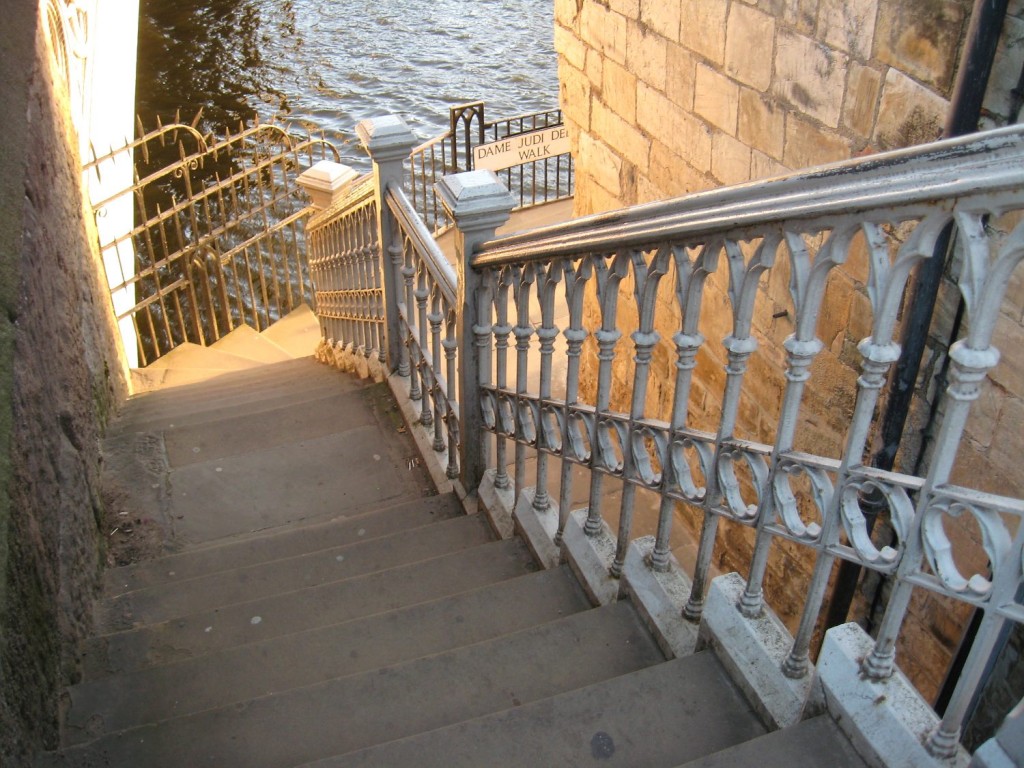 This month I’ve posted something every day, an ‘April daily photo‘. I thought I’d summarise it all here, with a list, and a few thoughts below.

Then details didn’t seem enough, and we shifted focus. So number 4 was a photo of the under-construction Peasholme Centre.

Number 5 was about geese, and how a Task Group is scrutinising them.

Number 6 shifted to a since obscured view of a former industrial building across one of those areas we call a ‘brownfield site’.

Number 7 looked from the outside at a building less widely accessible than it was, because of changes to its charges for entry.

Number 8 was an appreciation of daffodils in flower, which seems essential in April, on a piece of land we tend to think of as ‘common land’, but I’m not sure it is.

Number 9 took us to the gate of a place closed and private for decades, a building site now, for student accommodation.

Number 10 paused to appreciate another flower, on a piece of land rescued and enhanced, a former tip to a nature reserve.

Number 11 revisited a school building long since demolished, a landmark in its neighbourhood, nominated for the Local List.

12 drew our attention to a famous painted ad on a wall, and the changing streetscape around it.

13 visited a soon-to-be-demolished furniture warehouse, and a characterful detail round the back of the building.

14 went back to revisit 12, from a slightly different angle, confirming that a view of it has been lost, with a recent building intervening.

15 pictured a pub since demolished and replaced with housing.

16 visited a street corner where one photo prompted a lot of thought and brought many of this month’s general themes into one page, which ended up rather long as a result.

17 visited a large building site on brownfield land out in the suburbs, a residential development, but with no ‘affordable’ housing provision.

18 perused the newly-glazed colonnade at the theatre, which has claimed its space in full and no longer freely shelters shoppers at the bus stop.

19 appreciated an architectural detail reminding us of the importance of co-operation, on a building soon to be student accommodation.

20 took us out of town to a lane which has survived as a right of way, despite the land on either side being used for military purposes.

21 paused by a quiet corner of the Museum Gardens and thought about cultural change, and toilet provision.

22 considered the reuse of a building, a change of use, and why people who live nowhere near it feel so strongly about it.

23 looked at some lovely blossom and a tidy rose bed and reminded us not to take things for granted.

24 appreciated the beauty of a well-worn pathway between trees, and reminded us of the value and importance of rights of way.

25 looked at a 1960s office block, and plans to convert much of it to residential accommodation, as has happened with many other office blocks in the city.

26 was inspired by a plaque on a wall in the Museum Gardens, wondering if agreements being drawn up would safeguard our rights to visit it for free.

27 revisited the subject of the ‘problem geese’ and questioned whether they really are a problem, and how many residents see them that way.

28 touched on something else often seen as a problem in the city, the increase in licensed premises and extended opening hours.

29 took us back towards where we started the month, with an appreciation of a detail – layers left beneath, reminders of recent history.

30 took us to the heart of York, or one of its hearts, to a plaque on the Mansion House and the thoughts it provoked, as we move into May.

It ended up being a bit wider in scope, and a fair bit deeper in thought, than I originally intended. It was supposed to be a way of providing something new for visitors to the site to look at every day, but without being too time-consuming for me to do. But it ended up taking up a lot of time, and so a daily update probably isn’t sustainable.

However, I’m pleased with the overall result, and how it grew. And it ended up going in a certain direction because of a walk on the evening of 3 April, only a few days in. That wander into and through part of the city centre was the first I’d done for a while where I was in the right frame of mind for taking proper notice of my surroundings. And various thoughts I’ve been having for some months/years resurfaced in response to the things I was seeing, and they’ve emerged in the many words since, and affected the choice of the daily photo, and made me change some of the selection from images I’d planned to use when sketching out the project. (One of the ‘rejects’ is at the top of this page.)

So what have I wanted to focus on, in choosing these particular images my camera focused on …

That we shouldn’t take things for granted and assume we’ll always be able to access them, enjoy them. That sometimes the place can still surprise, particularly in April when flowers appear. That buildings have been demolished and new ones built, and that the new ones often intrude on views we once admired, and that perhaps we demolish less often now, and refurbish more, turning offices into homes, former chapels into supermarkets. That there’s a lot of student accommodation being built. That there’s a lack of residential accommodation for everyone else. That the city tilts towards the interests of the better-off, more and more. That less of it is accessible for free to the wanderer of its streets and potential peruser of its cultural institutions. That all these things tie in to things I’ve been writing about for years in different ways, because it’s all connected. And that I’ve been observing all this and all these changes for a long time, and that in my head it all links together and layers up and that when it does I tend to write a lot about it.

And that there are a lot of planning applications we need to visit or revisit, and geese we need to perhaps defend, so after a short break we’ll resume our efforts. But perhaps not post every single day. I’m having a flare-up of my repetitive strain injuries from typing so much, and my eyes are tired.

Thanks for comments added recently, and for the retweets and comments on Twitter too. Please join my mailing list if you’d like to be kept informed of recently added things via the weekly newsletter.