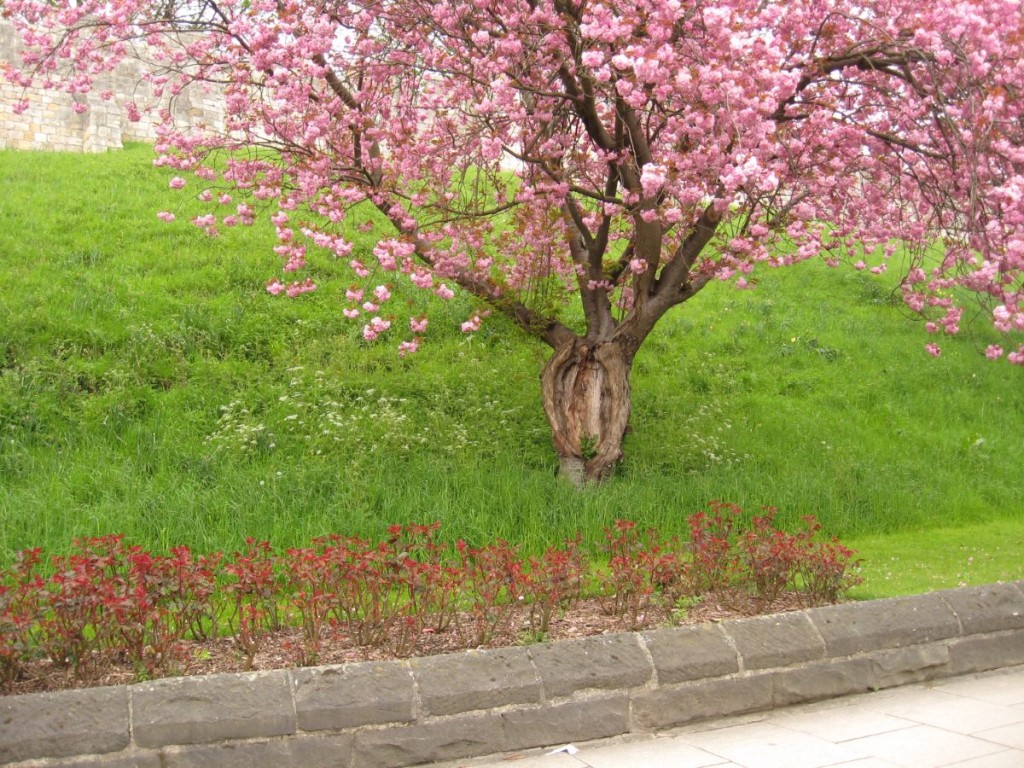 One of the much-looked-forward-to sights of April: blossom on the trees. Here by the city walls, on Queen Street, opposite the Railway Institute and Fleetways. Not just beautiful blossom but the pleasing new growth of a bed of rose bushes, all set against the green of fresh new growth on the grass.

This particular photo was taken on this day four years ago. The blossom may be out on Queen Street just the same today, or it might be a little later this year, or a little earlier, as it does of course vary slightly from year to year.

There won’t be any blossom from this particular tree, as it appears to have been removed, and a younger one replanted in its place, which will take a good few years to be of a size to produce this amount of blossom. But there are others nearby.

The roses have gone, and haven’t been replanted. I only know this because their disappearance was mentioned on Twitter a year or two back, and I remembered this photo. I don’t know why I remembered it. Or why I took it. Presumably because it looked so pretty, this combination. But it’s odd for me as this is the only photo I took that day, and that’s unusual, as normally once the camera’s out I take a lot.

Anyway, the roses are gone. That perhaps doesn’t matter, except that when the question was asked about their disappearance it was also mentioned that they’d had a plaque with them, as if they’d been a memorial, or perhaps a gift presented to the city. Does anyone remember that?

There’s a more general point here too, something I’ve wondered, whether gifts of plants and trees, memorials of plants and trees, are as common in cities as they used to be, and whether it’s perhaps a good thing if they’re not, with cuts to council services. Plants need tending, and I get the impression there’s not the funding or staff to tend to them.

Anyway, there are still many trees full of blossom in the Queen Street area and opposite the station, and indeed all over, so we should make sure we take a moment or many to appreciate this fleeting, delightful, cheering spring thing.

By Lisa @YorkStories • 23 April 2016 Details, Green places
Tagged  April-daily-photo
To link to this page's proper location please use the > permalink