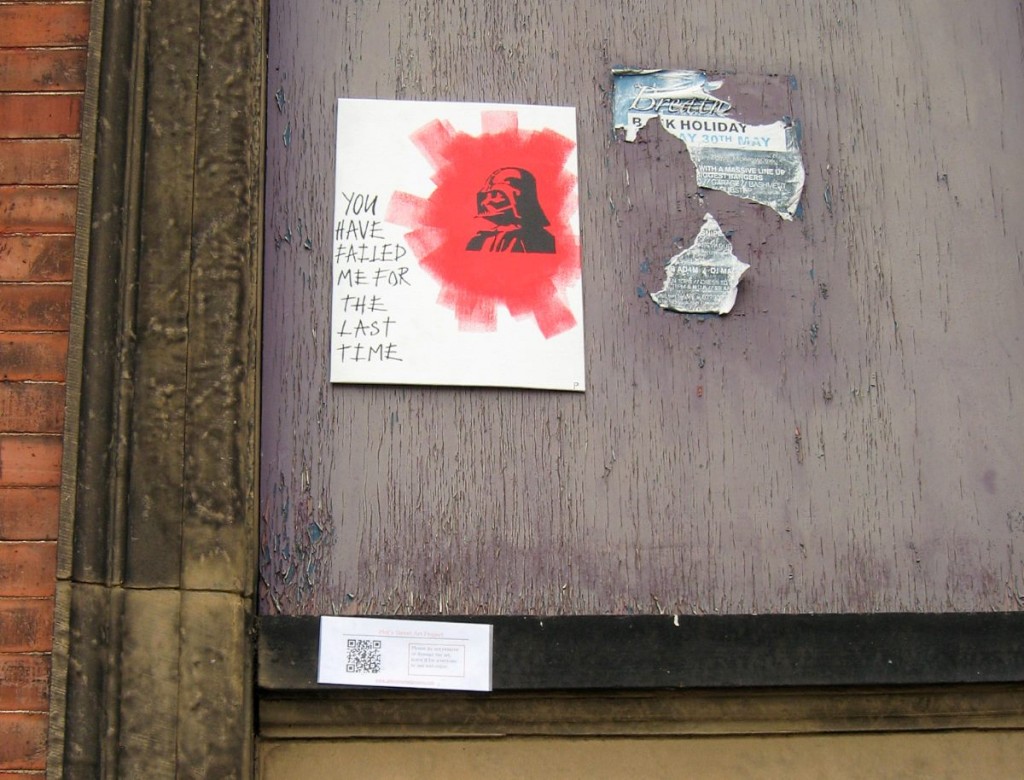 Artwork on the boarded-up windows of Groves Chapel, 22 April 2013

Today’s ‘April daily photo’ was taken on this day in 2013. It’s a piece of street art — part of ‘Phil’s Street Art Project’ — next to a rather tatty-looking advertising flier, both of them stuck on what appears to be an empty building, with boarded-up windows.

It’s actually the front of Groves Chapel, on Clarence Street. Phil and everyone else could have been forgiven for thinking it was an empty building, as it certainly looked like one. It’s had boarded-up windows for years and years. Since at least 2004, when I first took a photo of it, and probably for decades before that. Because the chapel hasn’t been used a chapel since the 1970s.

I find all this interesting, as I’ve been walking past this building for years, and have written about it several times since it went on the market. (And carry on doing so, as it’s interesting to follow the progress of the plans.) If it does house a Sainsbury’s convenience store then that will be very convenient for me, and hundreds of other people who live within walking distance. Most people I’ve spoken to who live near enough to be potential customers are in favour of the plans, as are many people who visit the nearby hospital regularly.

But people who live further away have felt strongly enough about it to write to the Press in response to the planning permission. One letter came from Brian Watson (former councillor) on Beckfield Lane (Acomb), who said it was the worst place in York for a supermarket, accompanied by another from a resident of St Paul’s Square (Holgate): ‘Filled with sadness as iconic building is turned into another supermarket‘.

I don’t like the idea of anyone being filled with sadness, particularly about a building, and particularly because I’ve felt great sadness myself on occasions about particular buildings. But that’s usually because the buildings were going to be destroyed, demolished. Groves Chapel isn’t. It’s being saved, and refurbished. Its impressively confident front will still proclaim its name and year of erection/opening in stone across the wide junction towards the Groves area it was built to serve. Hidden away from public view what’s left of the historic parts of its interior will be repaired and preserved above the supermarket’s ceiling. And a lot of the people in the Groves will no doubt flock over there to its entrance to buy groceries, just as our ancestors flocked over there to worship.

I appreciate that this change of use may be troubling. But the chapel presumably closed because of dwindling congregations, just like many others in this city and elsewhere, and because large grand chapel buildings like this are expensive to maintain.

Though they’ve not all closed. One was featured in the Press some months back: £3m plan announced to turn York city-centre church into community centre.

Letters and online comments about Groves Chapel have called it ‘iconic’, ‘beautiful’. It might have been once, but it’s a shadow of its former self inside. Whereas the Central Methodist chapel is beautiful inside, with similar features, but in this case preserved and cared for, and still in use, though it’s 40 years older than Groves Chapel.

It has characterful curved pews in its handsome gallery, colourful glass in its windows and a fine-sounding organ, which I heard on one memorable occasion, on one of the Heritage Open Days a few years back.

If we really care that much about these large Methodist chapels built by our ancestors then perhaps we could divert some of our energies and attention to supporting the Central Methodist church on St Saviourgate?

Lisa @YorkStories is the creator, administrator, and writer of content on www.yorkstories.co.uk. She can be contacted on this link or via Twitter, @YorkStories
View all posts by Lisa @YorkStories →
Tagged  April-daily-photo, chapels, Groves Chapel
To link to this page's proper location please use the > permalink