The theatre and its glazed colonnade 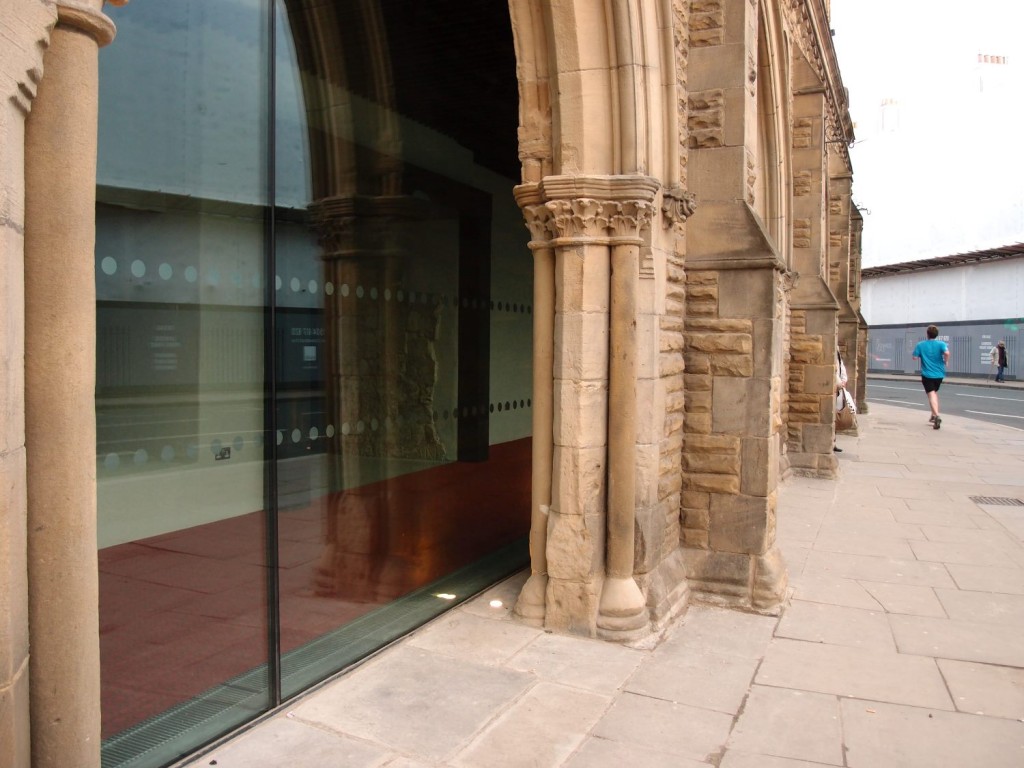 No longer open to all: the glazed colonnade at the front of the refurbished Theatre Royal, April 2016

York’s Theatre Royal has been undergoing major refurbishment, as most of us are probably aware. York Mix recently included photos of the remodelled interior.

I haven’t been inside it, but passed the front of it on an evening wander a couple of weeks back. More on that later perhaps. For now, let’s focus on this glazed colonnade.

Before the glazing was installed the arched openings at the front and sides gave access to a sheltered roofed area alongside the pavement and bus stops outside the theatre. It was handy if you were in a rush and the pavements in front were busy, as you could nip through the colonnade.

Now it has café tables in it, and carpet on the floor, and if you try to dash through it on your way along St Leonard’s Place you’ll collide with the glazing.

It was also a handy shelter from the elements when waiting for a bus in the rain. Something mentioned in a recent piece on the refurbishment in the Guardian:

Some of the extra space has come from glazing and incorporating the Victorian gothic arched colonade, which used to serve as a shelter for the bus queues outside. It is hoped that instead they will now come in to buy coffees.

Mmm. Reading this makes me feel a little bit uncomfortable.

There are a several places a stone’s throw away where coffees can be bought. The city is full of them, in fact.

If you’re into drinking coffee and eating out and enjoy going to the theatre and the art gallery then it’s all looking good. If you don’t have the money to do those things, and if you often catch a bus home from the outside the theatre, or indeed have no home to go to, then York seems a less friendly place. I’m getting that impression, seeing many examples of a divide, completely different experiences and perceptions of York and what it’s like to live here. These new glass walls in the theatre’s colonnade seemed to symbolise that somehow.

By Lisa @YorkStories • 18 April 2016 Buildings, Changes, Details
Tagged  April-daily-photo
To link to this page's proper location please use the > permalink