Stags and hens, and the Micklegate Run 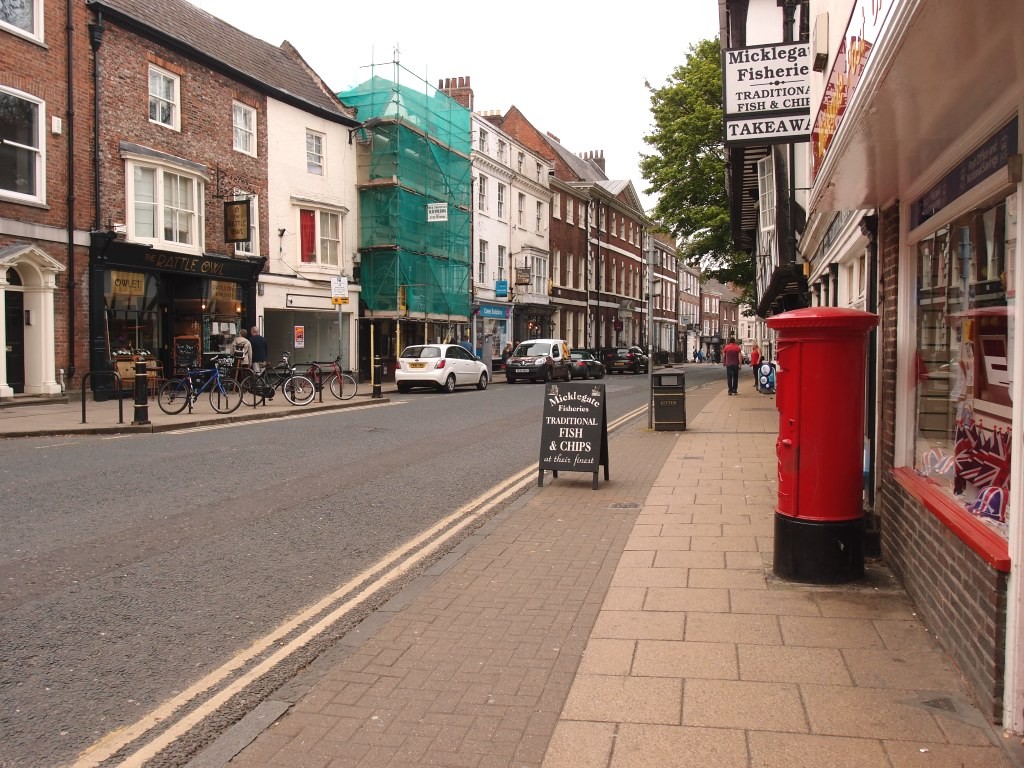 It’s a sunny Saturday in May. While I’m sitting here all quiet and thoughtful, wondering whether to do the planned page on a particular planning application, town will be filling up with people. Some of them perhaps in large rowdy groups, already drink-fuelled and looking for more. Some perhaps in the Micklegate area. Though not when I took the photo above, in a very quiet Micklegate at around 7.30 this evening.

We’ve touched on this subject before, most recently a week or so ago. As it’s in the news again this weekend — with a Teesside paper running a poll asking its readers Can Teessiders be trusted to abide by York ‘code of conduct?’  — let’s bravely take on the town centre and investigate the ‘drinking culture’. Let’s have a heated debate over a pint. Or a polite well-mannered discussion over a cup of tea. And perhaps wonder if the whole thing has got a bit over-inflated, like some of those gigantic willies seen on the streets, and if it’s really as bad as the press coverage suggests.

I’ve never had a hen party, never been on one, don’t want to go on one. The whole stag and hen thing baffles me. I’m looking on with a mixture of bemusement and occasional amusement. The police do their best to control the situation in a measured way by requesting the deflating of inappropriate inflatables and national papers discuss our problem with gigantic willies. Yet some people find it very offensive and apparently quite serious. I’m trying to understand why.

Like the geese, the stags and hens have a Task Group to scrutinise them. Interesting that isn’t it. There was a report (PDF) which may be of interest. It includes findings which may seem to be obvious, such as that providing more toilets might be a good idea.

How many people have to complain about something for it to be seen as a problem requiring special attention, I wonder. I wonder how many people, the silent majority perhaps, just accept that occasional inconveniences and moments of being slightly offended or shocked are all part of life’s rich and varied tapestry.

I have seen, in town on Saturday afternoons and evenings, various sights that have made me raise my eyebrows in surprise, then look away to find something more pleasant to look at. A middle-aged woman vomiting into a sick bag while her hen party friends gathered round. Walking into St Helen’s Square from Lendal to see a man holding one of those inflatable dolls in front of him and having simulated sex with it, while his friends laughed. I was a bit shocked/surprised, momentarily, but carried on across the square, no harm done.

Being offended isn’t the same as being harmed. That seems an important point. I didn’t think those things should be controlled/banned/driven from the streets/have a Task Group scrutinise them.

And it’s not all grim and ugly anyway. Memorable entertainment was provided on one Saturday afternoon by one of the hen parties dancing in the street on Spurriergate to music provided by a group of buskers. The energetic and bouncy singing along and dancing had drawn quite a crowd, but particularly splendid was the fact that the women in the hen party were dressed in Dalmatian-spotted ‘onesies’. It was one of the daftest and most cheering things I’ve seen in the centre of York on a Saturday afternoon. Spontaneous and joyous and causing no harm at all, and brightening my day, in fact.

The large inflatable penises seem to cause particular offence. Why? Isn’t it just silly, bawdy, done in the same kind of spirit as those old saucy seaside postcards we now get nostalgic about?

In summer 2015, when this subject was receiving a lot of attention, David Dunning shared a photo on Twitter of a group of women heading towards Micklegate Bar carrying a large inflatable. It’s on this link if you’d like to see it, but please don’t look if you’d be offended.

The huge joke phallus, held aloft, about to enter an opening of our city’s defences, was an interesting image, and the reactions to it were equally interesting. It made me smile. It upset other observers. I wondered why. Perhaps provoking some ancestral memory of invaders storming the city? ‘Quick, there’s a huge group of women at the gates, holding an inappropriate inflatable, shut the gates! Lower the portcullis!’

It made me think of Chaucer and the Wife of Bath and medieval bawdiness, and the grittiness that is as much a part of the life and heritage of this city as its prettiness. The focus on its prettiness is a fairly recent thing. Personally I don’t want a genteel middle-class monoculture.

The phallus-wielding women were pictured at Micklegate Bar, perhaps about to start the Micklegate Run. Which, conveniently, leads us on to …

When I wrote the earlier page about this street and the cultural shifts apparently happening here I was aware of an event planned for this summer, a soapbox challenge. What hadn’t registered was that organisers have called it The Micklegate Run. Traditionally applied to an aspect of the local ‘drinking culture’. 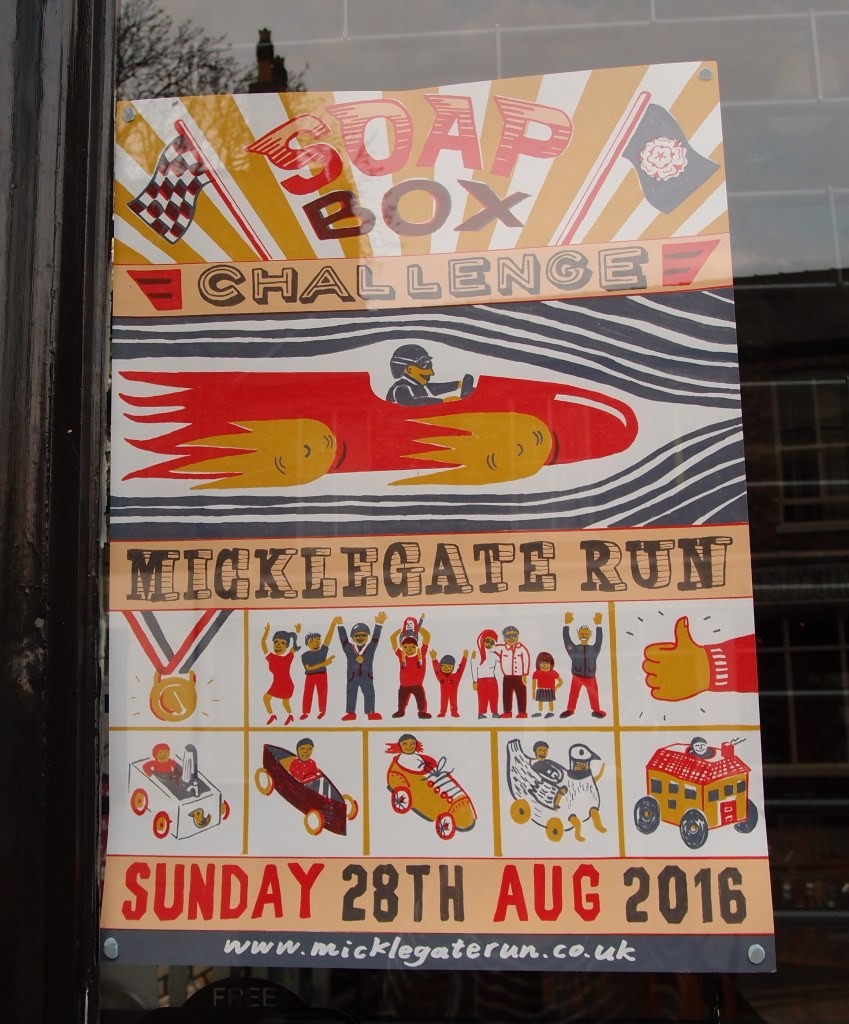 This is a clever idea. I wonder which came first, the event idea or that they wanted to have an event they could apply this name to. Further reading, of a York Mix article from last autumn, makes explicit the wish to ‘reclaim’ the street’s reputation, to make it the ‘great street’ it once was.

The use of the word ‘reclaim’ really stands out. Reclaiming is only necessary when there’s a feeling that something formerly or rightfully belonging to a particular group has been controlled or appropriated by some other group. Usually a more powerful group.

Not sure that applies here, but it’s an interesting cultural shift/conflict/question.

Those rowdy visitors come with a lot of money in their pockets, and it ends up benefiting many local businesses.

They tend to visit at weekends. The rest of the time Micklegate seems relatively quiet and genteel. Room for everyone, surely?

Lisa @YorkStories is the creator, administrator, and writer of content on www.yorkstories.co.uk. She can be contacted on this link or via Twitter, @YorkStories
View all posts by Lisa @YorkStories →
Tagged  Micklegate
To link to this page's proper location please use the > permalink