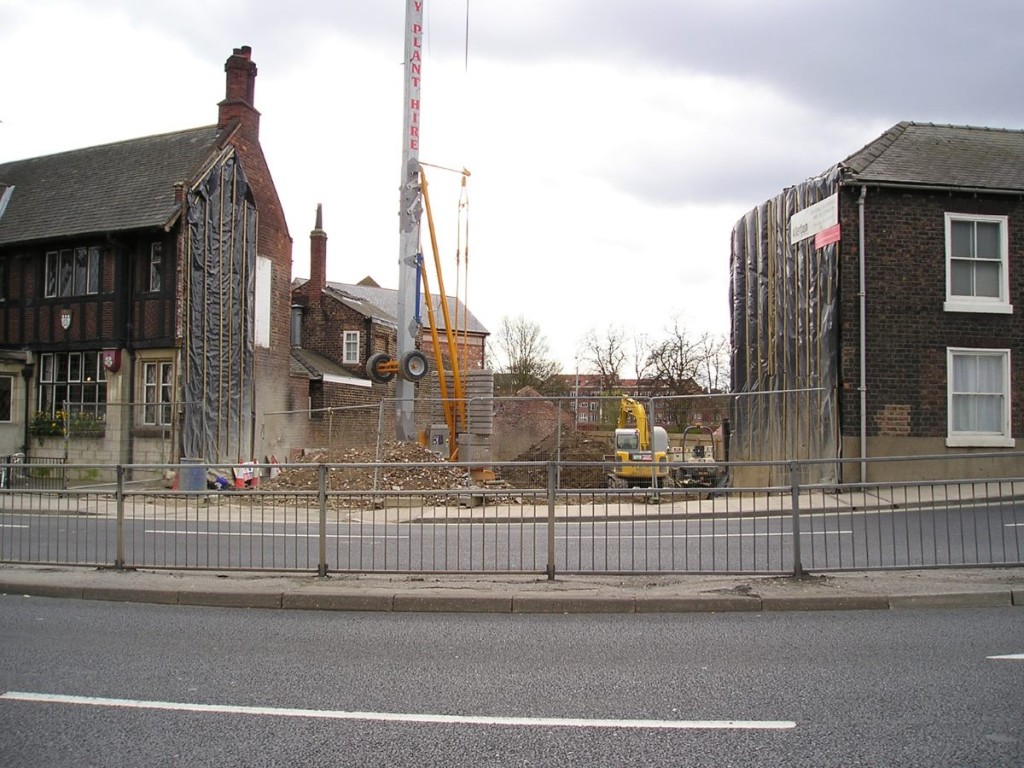 The site of the new Peasholme Centre, under construction, 4 April 2008

When I thought about this ‘April daily photo’ idea I intended that each photo would either stand on its own or have a short paragraph of text to accompany it. Having now gone through the available photos from the archives from the month of April in years past I can see that a few of the images I intend to include might need accompanying text of a slightly longer length. This is one of them.

On 4 April 2008 I took quite a few photos on a wander through York, including some pleasing ones of St Denys’s church on Walmgate, with beautiful light coming in through the windows. But it seems more fitting today to focus on this photo instead.

The Peasholme Centre is a hostel for people who are homeless. Or, more specifically, a resettlement centre for single homeless people or couples without children. The building was completed and opened the following year, 2009.

On the previous ‘daily photo’ page, yesterday, I mentioned a walk yesterday evening, through town. Too long to write about. But I did mention it on Twitter — and my abiding impression from it:

I’ve been walking around York for years, don’t recall ever before seeing so many people sleeping in shop doorways.

The main reason I use Twitter is because I find it’s an excellent source of information on things I’m interested in and care about. And via Twitter I think I’m fairly well-informed on ‘the state we’re in’ here in the UK, in our towns and cities. It’s clear that things are quite grim, that there’s a deepening division between those with lots of money and those with very little. That the vulnerable in society are in dire distress, over and over. And that while many of us are worrying about the property ladder, some people will never be anywhere near even reaching for that ladder. And that there’s still a lot of misunderstanding and ignorance about why some of us end up sleeping in a doorway while others can spend a night drinking cocktails at £7.50 a time and thinking that’s ‘reasonably priced’. And in York that division is becoming so deep that I felt I had to comment on it, and it’s something I’ll probably return to, because I can’t ignore it.

And haven’t. See ‘related’, below. This page from December 2014 is particularly relevant, and includes Shed Seven, whose gig in support of SASH and the Arc Light Centre sold out today, within a couple of hours of tickets going on sale. I hope the proceeds help the good work of those charities. I hope the Peasholme Centre helps those who have a room there. I don’t know how we help the people in the doorways. Not under this government, which seems callous in the extreme. I try to avoid being overtly political on these pages, but I think I’m old enough and wise enough to recognise that.

By Lisa @YorkStories • 4 April 2016 Buildings
Tagged  April-daily-photo, homelessness
To link to this page's proper location please use the > permalink