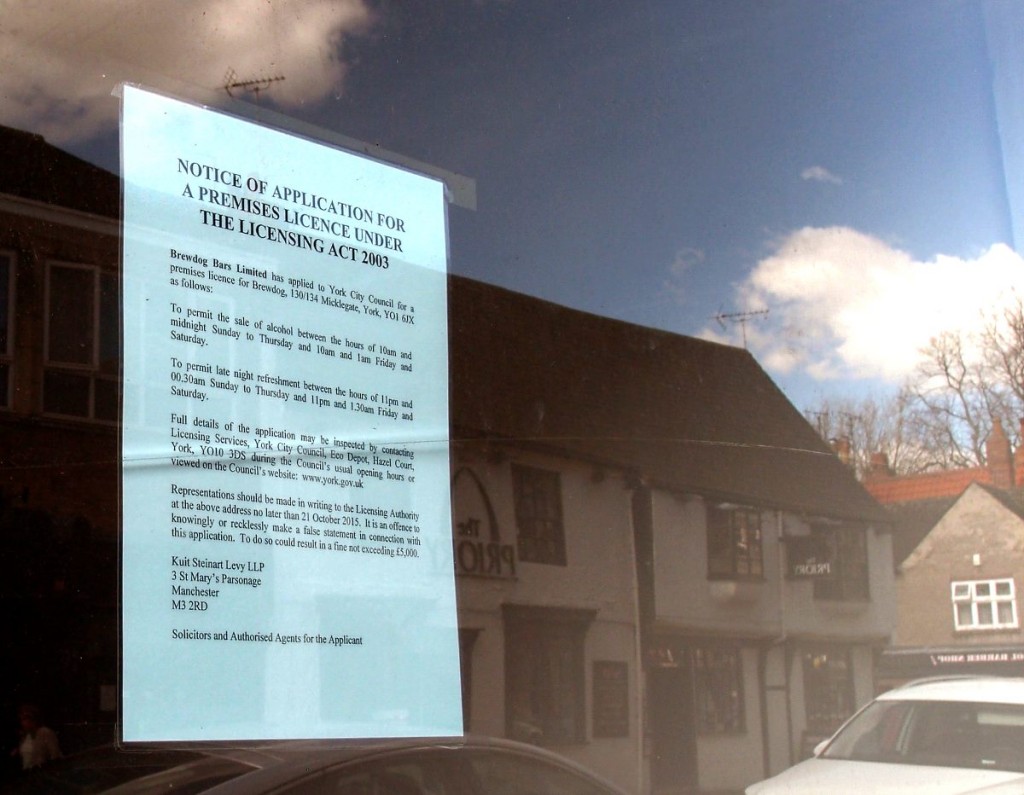 Today’s photo is of a licensing application document in a window on Micklegate. The window also reflects The Priory, a pub on the opposite side of the road, near the entrance to Priory Street.

When I started these pages site notices about planning applications seemed to be stuck up on lamp posts and the like everywhere I walked. There are still a lot of those around of course, but they seem to have been joined in recent years by an increasing number of documents relating to licensing applications, as more pubs, bars and restaurants open.

This one’s in the window of a large empty shop near the top of Micklegate, which is soon to be a Brewdog bar. I probably wouldn’t have given any thought to this, or stopped to take this photo, if it wasn’t for the recent Press coverage of a court battle over the licensing application.

Micklegate is an interesting street. Perhaps now a place where different ‘cultures’ are clashing. There’s clearly a movement to change the feel of the street, to promote it as a shopping street and community of businesses, like Fossgate perhaps. To me, and other people of my age and older, it has always had the word ‘run’ attached to it – as in ‘Micklegate run’, meaning it was a magnet for people out on a pub crawl who went down the street from one pub to another. Not something I’ve ever done myself. I remember tending to avoid it at ‘chucking out time’ (often accompanied by chucking-up time) on weekend evenings.

Back then, of course, we tended to be chucked out of the pubs not long after eleven. Drinking up time was announced with a shout from behind the bar and, as I recall, a bell ringing (or was that just some pubs). As I’m writing I’m suddenly recalling, almost hearing it again, the preceding ‘Last orders at the bar, ladies and gentlemen, please’.

But it’s different now, isn’t it. That 2003 Licensing Act referred to in the official notice on the window changed the rules on opening hours and made them more flexible. Apparently it came into effect in November 2005. So we’ve had just over a decade of this new relaxed ‘open all hours’ approach in our licensed premises.

So many things could be said. Perhaps this isn’t the place to attempt a lengthy discussion of what tends to be called ‘the drinking culture’. But I have to mention that I keep thinking of the Esher report, and its promotion of the idea that more people should be living in the city centre, within the walls, and how this has been encouraged, with many new apartment blocks and more people living in flats above shops. But we only need to read the observations of Pamela Ward in that report, where she describes the cultural life of the city, to realise that city centre living in the age of the 11pm ‘last orders’ would be a very different thing to city centre living now.

And in the Micklegate area … it’s hard to see that it will ever be a quiet kind of street, though there are obvious moves towards trying to make it more ‘gentrified’, like the rest of the city centre. But it’s still the main gateway in from the racecourse, the first street of pubs within the walls that the racegoers arrive in, coming up that ancient straightish road from the Knavesmire. And it’s near the station, and it has its reputation, and it has always had a lot of pubs, and that’s part of its identity.