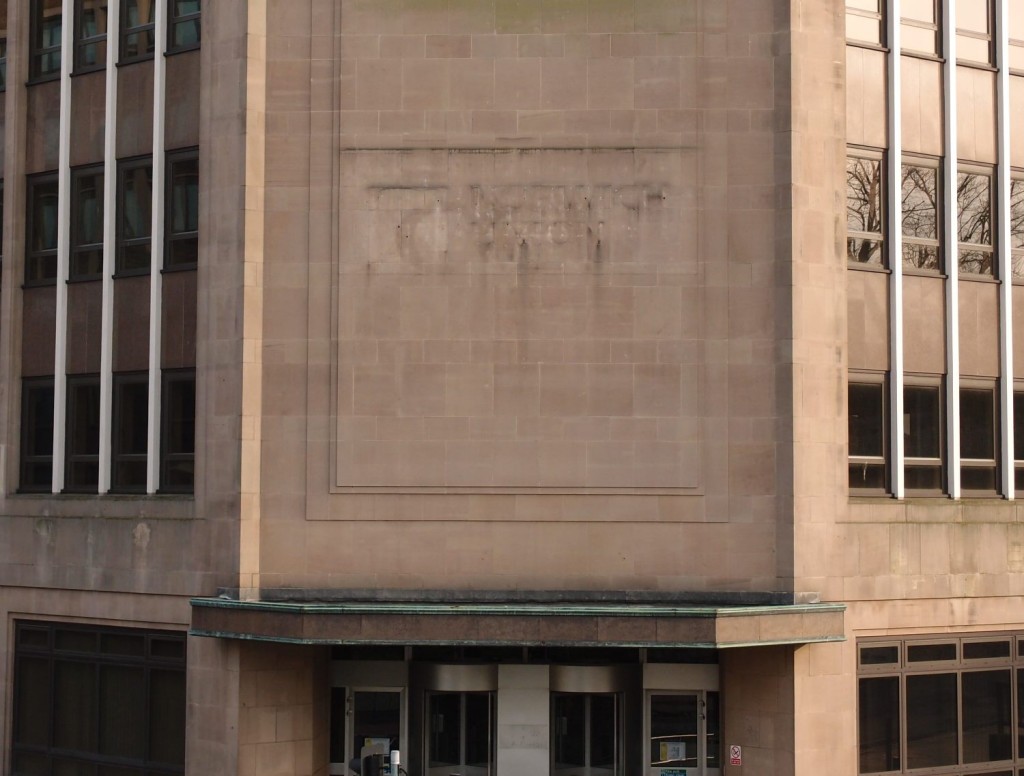 While on my way to look at Hudson House earlier this week I noticed this, the subject of today’s ‘April daily photo‘, from the vantage point of the city walls.

It’s a building I’ve written about before, a rather dominant presence at the end of Rougier Street. I took a few quick snapshots of it, noticing what we might call a ‘ghost sign’, revealed by the removal of its most recent signage for Aviva.

When I wrote about it before — inspired by a splendid hand-drawn illustration of it in a 1970s advertisement — I wasn’t sure what to call it. Because it seemed to have changed its name quite often, as the insurance company whose office it was changed its name, following various acquisitions and mergers. So I just called it ‘2 Rougier Street’.

But here, under its most recent plastic signage, it held ghostly reminders of a couple of those changes of name. Zooming in and doing a bit of digital enhancement reveals them: 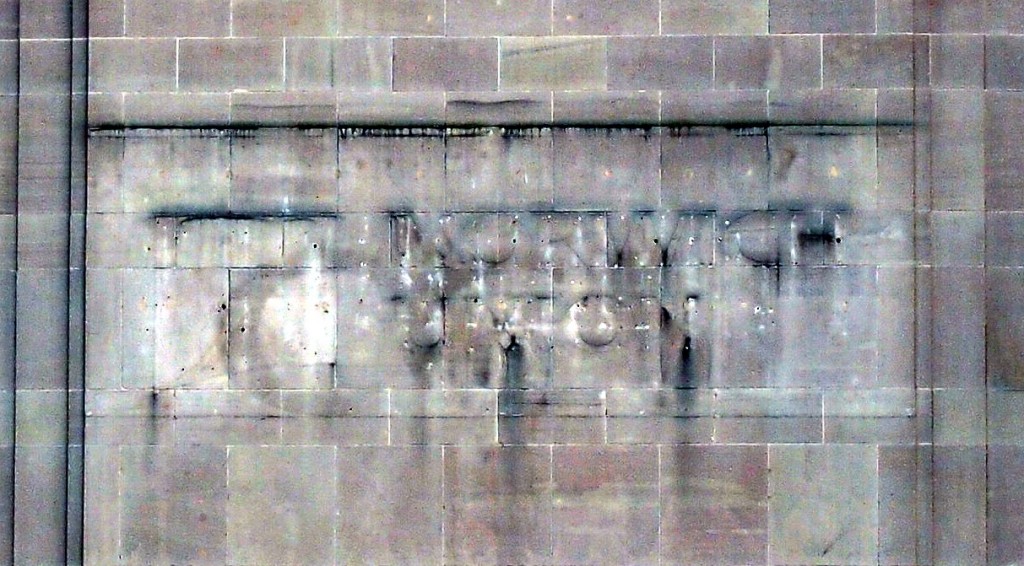 ‘Norwich Union’ is obvious. I thought I could also see a large ‘C’ to the right, and then remembered — wasn’t it CGU? — and some Googling revealed that it was (formed in 1998 from the merger of Commercial Union and General Accident).

When I’ve written about ‘ghost signs’ before it’s been in the sense of old adverts painted on brick walls, the fading kind, often hidden away behind newer advertising billboards, or still faintly visible. This is even more ‘ghostly’, though no paint has been involved here.

The signs, as I recall and as these reminders of them suggest, were plastic lettering. So what we’re seeing now must be the shadow left around them from the dirt accumulated back then.

This is a very congested, traffic-filled corner, with high levels of air pollution, something noted in the planning application documents for its conversion to residential.

These subtle sooty reminders of decades past made me think about how this office too was a major employer in the city, and when I think about the place now, having focused my attention, the name that comes to mind is ‘General Accident’, which must have been the name it had around the time I left school, when many people seemed to get jobs at General Accident.

No sign of that in the sooty shadows, but important to remember these things.

I guess they’ll clean up this important bar-walls-facing frontage, so I’m glad I captured this, if only on my compact camera in a quick passing snapshot.

‘Aviva’s history in York is really the history of Yorkshire Insurance’ says this fascinating article including many old photographs of York and advertisements from decades past.

Lisa @YorkStories is the creator, administrator, and writer of content on www.yorkstories.co.uk. She can be contacted on this link or via Twitter, @YorkStories
View all posts by Lisa @YorkStories →
Tagged  April-daily-photo, ghost signs, offices, Rougier Street
To link to this page's proper location please use the > permalink