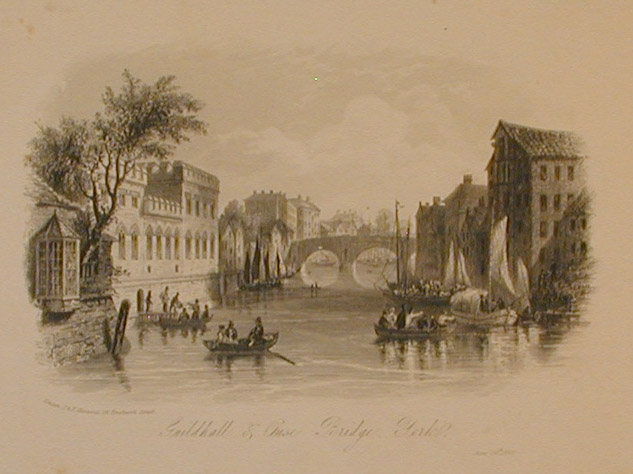 From present day things, back in time to the 1840s, and some observations of the city from a visitor back then.

When writing about Coney Street recently I remembered a description of it by T J Maslen. His book, Suggestions for the Improvement of our Towns and Houses, was published in 1843.

He wrote about many different towns and cities, and how he thought they could be improved. He wasn’t impressed by York, very disappointed in fact, calling it ‘a small filthily-dirty, confined town’, ‘full of little, narrow, ugly crooked streets’.

He’d heard that the streets were deserted and silent, and that ‘the grass grew in them’. He ventures down some of the alleys and lanes and finds ‘horrible filth scattered about in every direction’. (Some things don’t change, you might be thinking.)

His description of Coney Street, back then: 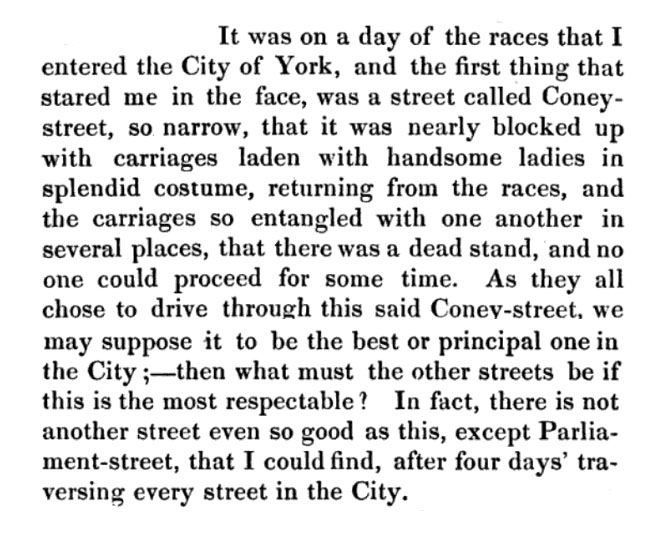 These were of course the days of the coaching inns. They’ve gone, but we still have the races, and Coney Street‘s still a busy thoroughfare, where sometimes on Saturdays you can still see ladies in ‘splendid costume’, though these days on hen party outings.

Clearly Mr Maslen is quite impressed by Parliament Street — quite new then — perhaps he wouldn’t be if he saw it now.

He mentions it again, and then goes on to suggest improvements for the river (where there are too many ‘dung-barges and coal-boats’) and the riverside areas: 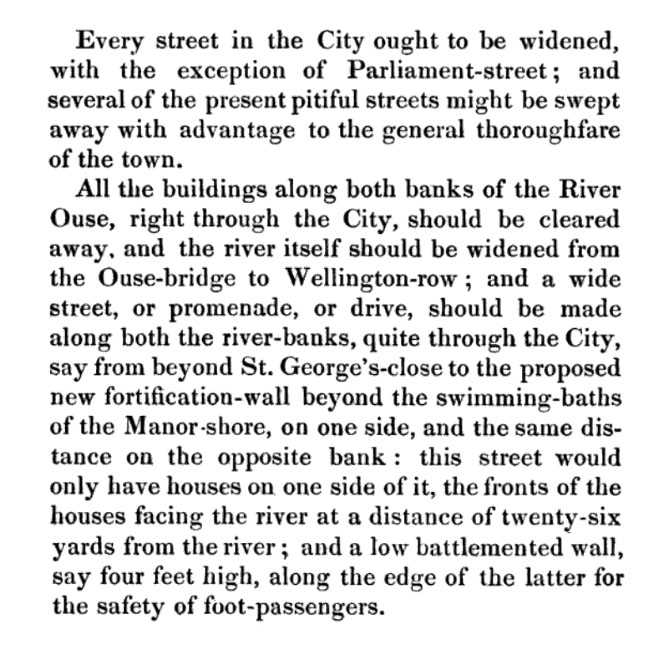 He’s clearly a moderniser, and thinks that big wide streets are preferable to the little, narrow, crooked ones.

Obviously his plans to create wide streets on either side of the river in the city centre would have entailed the demolition of the historic Guildhall, and they might look quite odd and comical now. But in his sense that more could or should be made of the river and its banks, in the city centre, he could be seen as ahead of his time. Most areas of the riverside are now accessible, though quite a bit of the riverside to the back of the Coney Street shops still isn’t. That may change, as Coney Street itself changes.

I’ve written about T J Maslen’s book before, back in 2011. You can read those older pages here and here — or read the book on Google Books, or the Internet Archive (various formats, including a plain text version).

This is part of December Daily, which, despite the lack of available light, has been sustained by many kind comments and virtual coffees, thank you.