Coney Street’s coaching inns, and what replaced them (part 2) 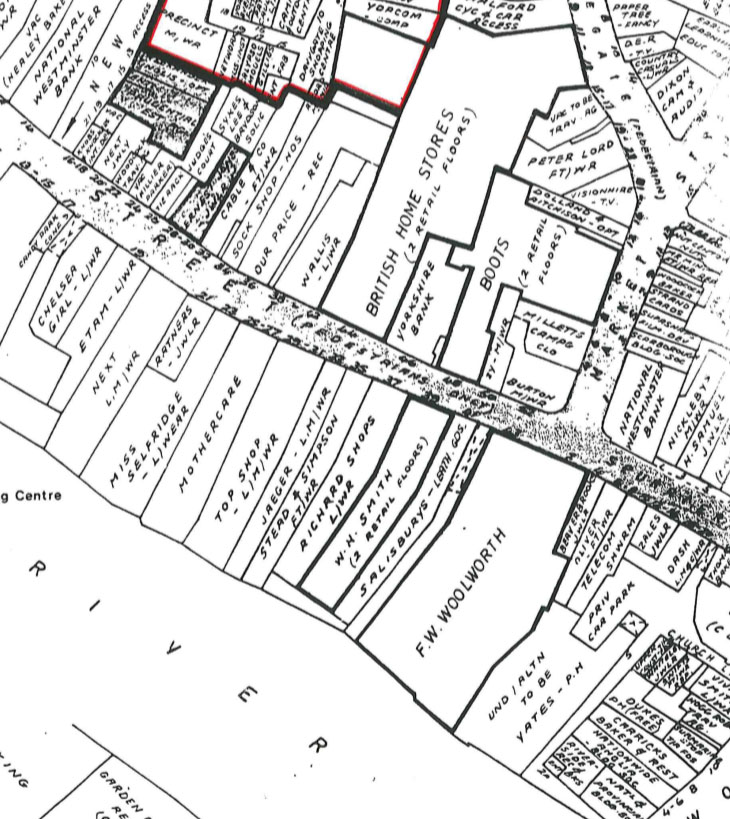 Yesterday the focus was on the store built for Leak and Thorp, on the site of an old coaching inn.

Today we’re across the other side of Coney Street, looking at another large site that was the site of a coaching inn but in the later 20th century was home to a large department store. I think it’s maybe obvious which one it is, from the plan above (previously featured on this page). 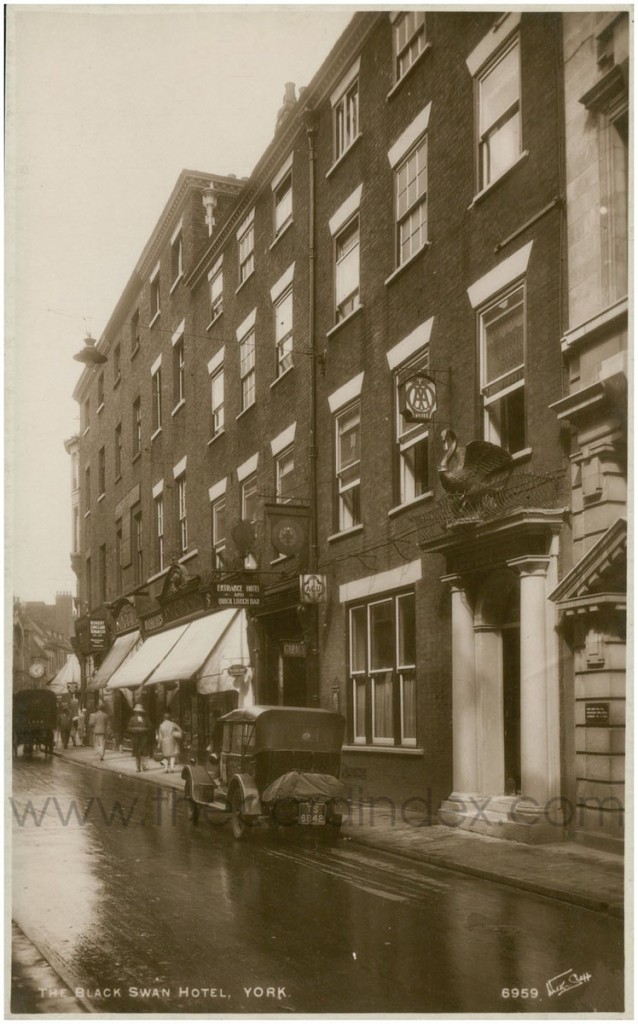 The Black Swan on Coney Street lasted longer than the George. The photo of it above dates from the first half of the twentieth century.

Like the George, the Black Swan seems to have occupied quite an area, as all these places stabling horses presumably had to (reminding me of the piece from many years ago on the horse repository on Tanner’s Moat, which went upwards a long way too).

I was looking for more photos or illustrations of the Black Swan on Coney Street, and couldn’t find anything. That was perhaps a good thing, as further searches led me to a couple of written descriptions, which are often more evocative than photographs — depending on who’s writing them, and for what purpose.  A journal by the American novelist Nathaniel Hawthorne, writing in 1857, includes these descriptions:

It is a very ancient hotel ; for in the coffee-room I saw on the wall an old printed advertisement, announcing that a stage-coach would leave the Black Swan in London, and arrive at the Black Swan in York, with God’s permission, in four days. The date was 1706; and still, after a hundred and fifty years, the Black Swan receives travellers in Coney Street. It is a very good hotel, and was much thronged with guests when we arrived, as the Sessions come on this week.

And from another visit that same year:

The Black Swan, where we had been staying, is a good specimen of the old English inn, sombre, quiet, with dark staircases, dingy rooms, curtained beds, — all the possibilities of a comfortable life and good English fare, in a fashion which cannot have been much altered for half a century. It is very home-like when one has one’s family about him, but must be prodigiously stupid for a solitary man.
— Passages from the English Note-books of Nathaniel Hawthorne, Volume 1 (1875)

Nathaniel Hawthorne was travelling by train, a relatively new form of transport.

I’ve mentioned before C B Knight’s book This is York, published in the 1950s and presumably written in the late 1940s/early 1950s. Mr Knight was York born and bred – as he states with some pride in his introduction – and his book includes many valuable insights from the perspective of someone who knows the city well. On one of his guided walks there’s mention of the George on Coney Street, and then the Black Swan, ‘one of York’s most famous coaching inns in pre-railway days':

The other famous inn was the Black Swan, which was closed fifteen or twenty years ago, although half the building still remains.

I read this and wondered which half, and why I’ve not seen any images of the demolition of what was clearly a major building on Coney Street. But clearly, at some point presumably not long after Mr Knight wrote the above, the wide and long site previously occupied by the coaching inn became a British Home Stores – BHS as it came to be known.

The shop was large when it opened, and later expanded even more. You could go into BHS from Coney Street and leave it via the New Street entrance or the Feasegate entrance, across land that was once the back plots and outbuildings and yards of so many premises crowded into this area between those streets and Davygate.

York’s BHS store closed in recent years, as did all the others, and for some time we had its wide blank front at 44 Coney Street. 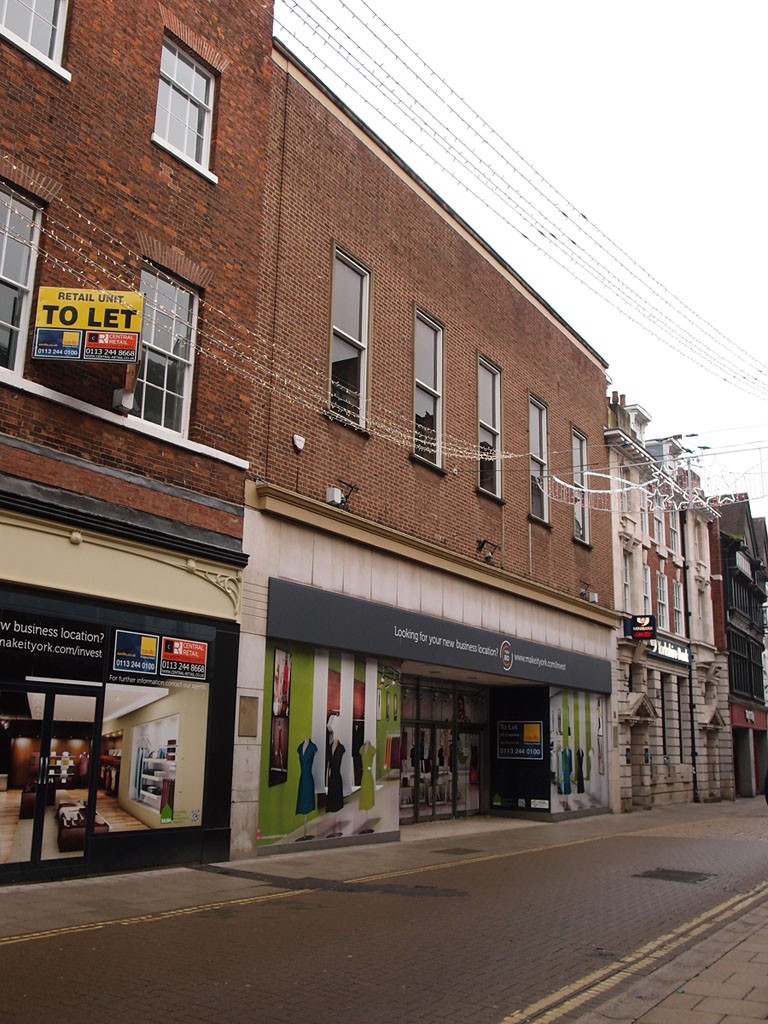 Like the old Leak and Thorp store, the former BHS seems to be shrinking back to smaller units. The block with an entrance onto New Street (number 11) has been partitioned off, to form a separate retail unit. Recently it’s become clear that the rest of the old BHS has also been split into smaller units. 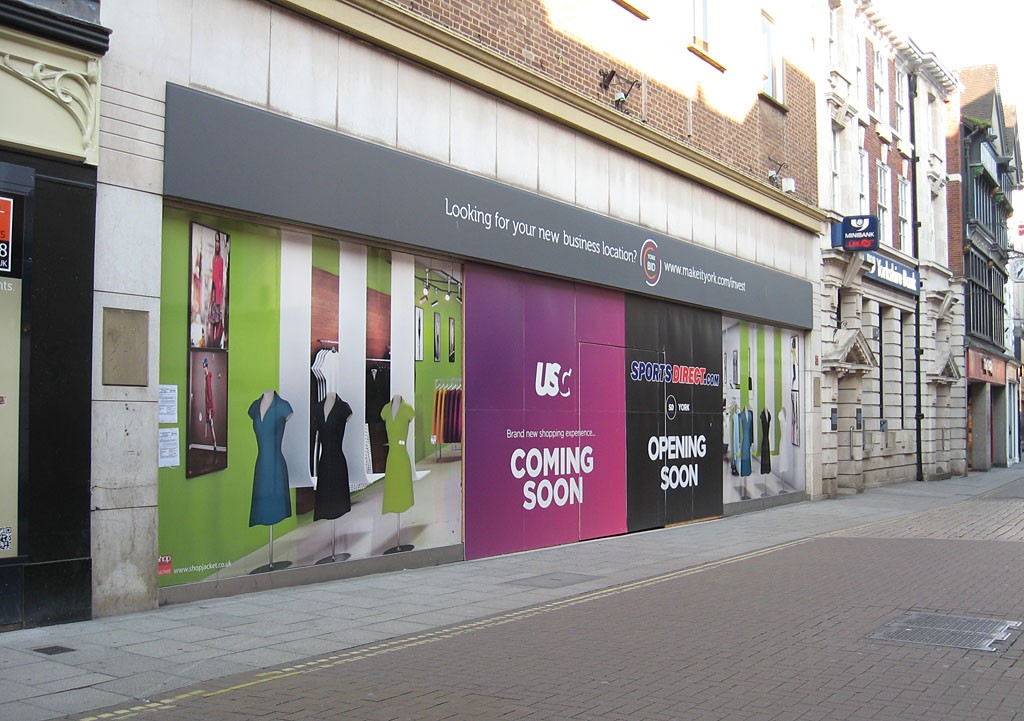 These new stores may have opened since I took the photo above back in August. Though if they had I guess I’d have seen some local media coverage of it, as any new store opening in what we used to see as our main shopping streets is generally highlighted, as so many stores in those streets have closed.

This record of York and its changes is supported by your virtual coffees.