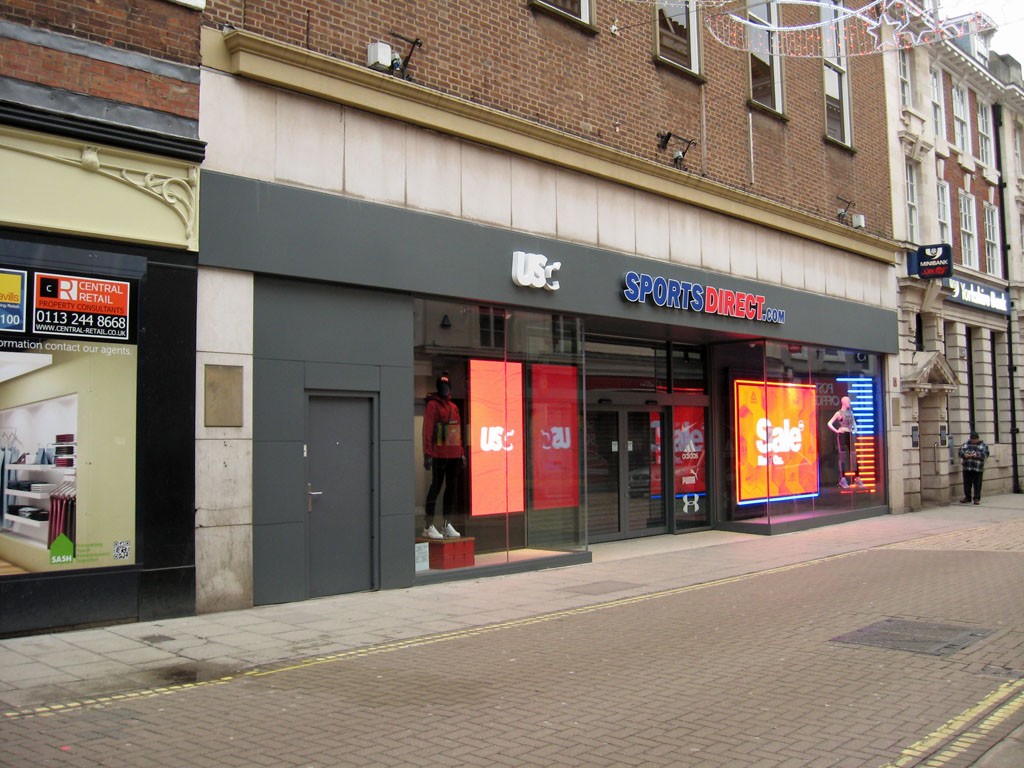 Recently, the new Sports Direct and USC stores have opened in what used to be BHS, on Coney Street. This was reported in the York Press as ‘a major boost for York’s premier shopping street’.

A brief wander into town on Christmas Day took in Coney Street, as I wanted photos of a particular shop further along the street, and thought I’d have a look at the new occupant of the former BHS, pictured above.

On a normal day when the shops are open it’s difficult to stand about in Coney Street staring at things and pondering, and taking lots of photos, without looking a bit weird and drawing attention to yourself. I called in on Coney Street this year on Christmas Day to stand and stare and to try to see it as it is now, in an objective kind of way.

Did the street look rejuvenated and reinvigorated now the former BHS was occupied again?

Well … not in a way that appealed to me. 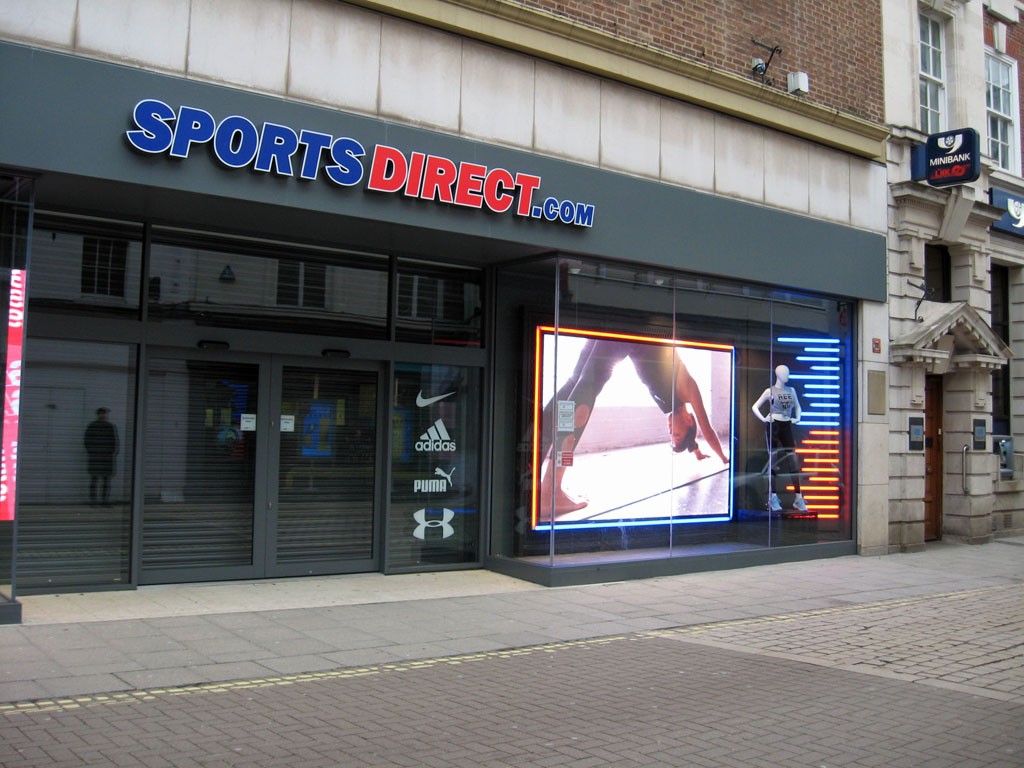 I looked at the new shopfront for the USC/Sports Direct store and thought it looked jarringly garish, out of place. A cloudy December day, a quiet street, a street with an ancient history (and not just as ‘York’s main shopping street’).

Large screens in its windows offered fast-moving images to the virtually empty street.

I stood directly in front of it and looked back towards the St Helen’s Square end of Coney Street, taking in the line of shops continuing on from the new store. 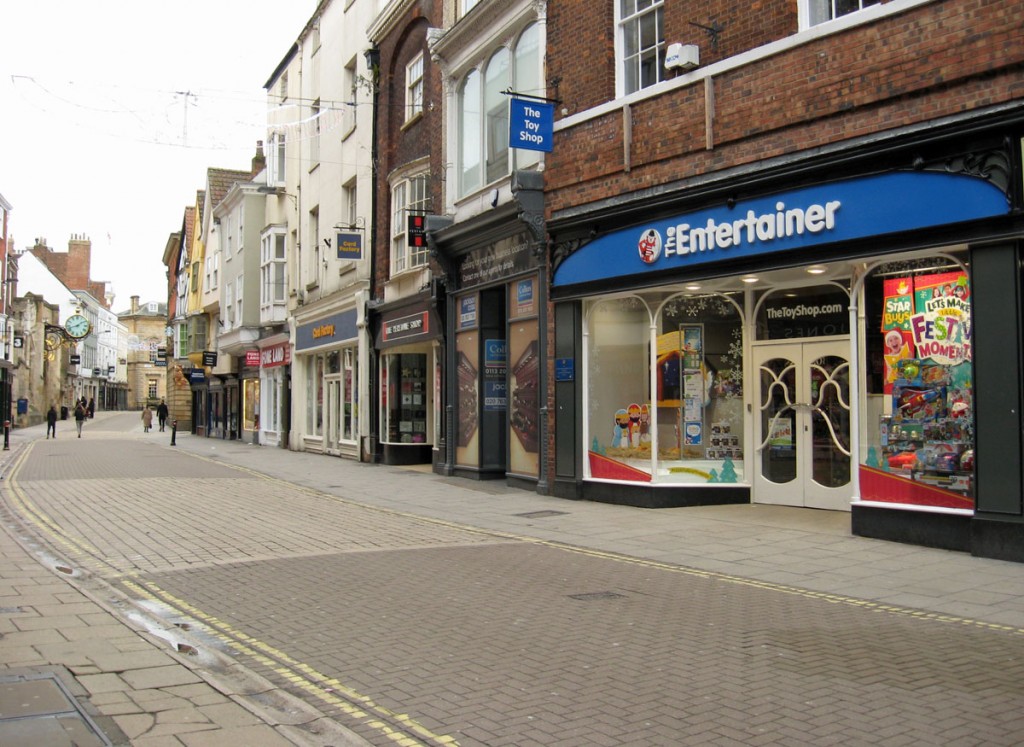 It all looked a bit rubbish, a bit wrong, a bit dated … well, a bit late-20th century. Like the new storefront had landed there in a street that was fading away from what the new store represents.

Looking above the shop level on Coney Street we have handsome buildings, or at least an interesting mix of them. Blending in harmoniously, in brick, wood, iron, lead, small and often wonky windows, the occasional weed (probably buddleia) growing out of a drainpipe …

Down here at street level, plastic signage on the shops that are open and rather desperate-looking shops that aren’t open. And the new shiny plastic of the Sports Direct logo looking too bright and garish on this faded shopping street.

What I thought did look completely ‘at home’ on Coney Street was this shop, Fabrication: 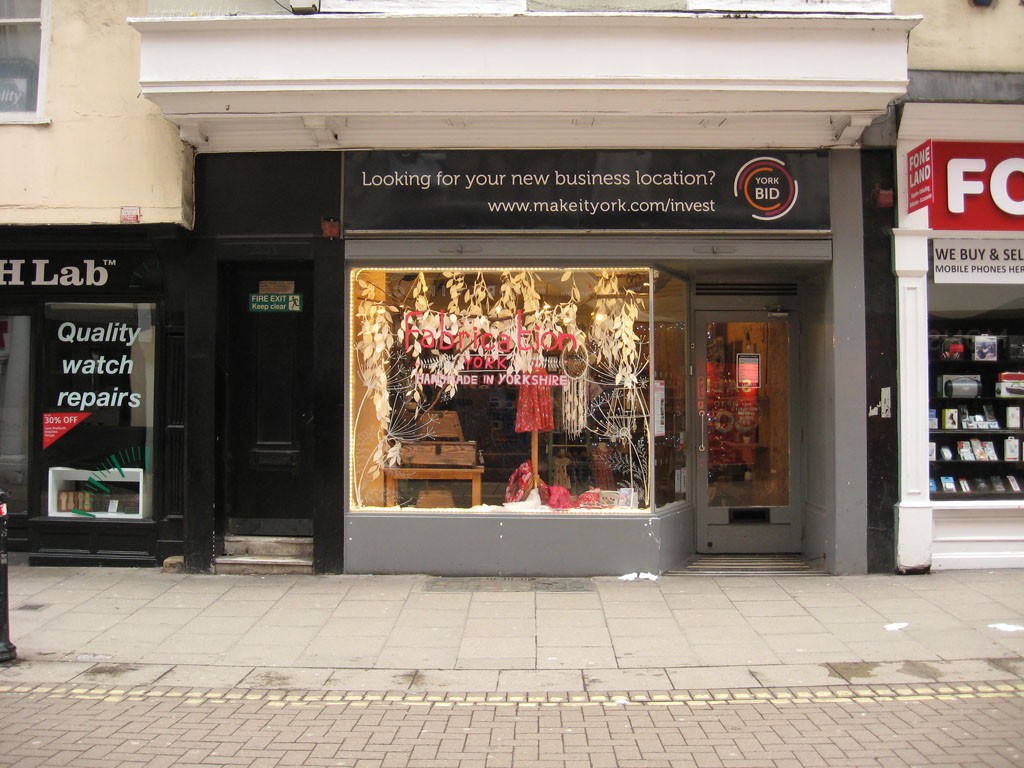 I mentioned it before – it was here in December 2018 and I’m pleased to see that it still is part of Coney Street. It’s in one of the older handsome buildings near the corner with New Street. It sells handmade things, made locally. 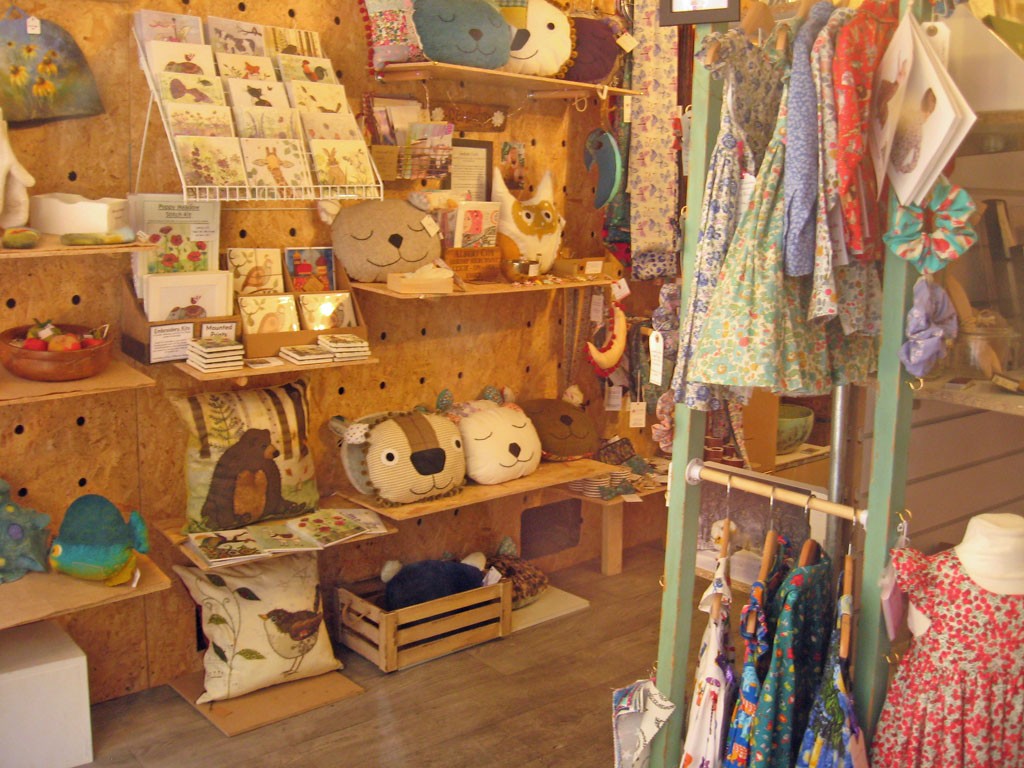 Fabrication, Coney Street, interior (apologies for poor quality, photo taken through the window when it was closed)

For some years now I’ve been thinking about the phrase ‘spending power’.

And how the ‘power’ bit of it should be the most focused on, rather than the spending, but that it probably isn’t.

Or maybe that’s changing, at last.

I’m finding Coney Street more fascinating than I did before, but mainly because I’m waiting for it to find its 21st century reinvigorated self.

This is one of the December Daily pages, supported by your virtual coffees. Thanks for your interest in, and support of, these pages.

Lisa @YorkStories is the creator, administrator, and writer of content on www.yorkstories.co.uk. She can be contacted on this link or via Twitter, @YorkStories
View all posts by Lisa @YorkStories →
Tagged  Coney Street, December Daily, shops
To link to this page's proper location please use the > permalink