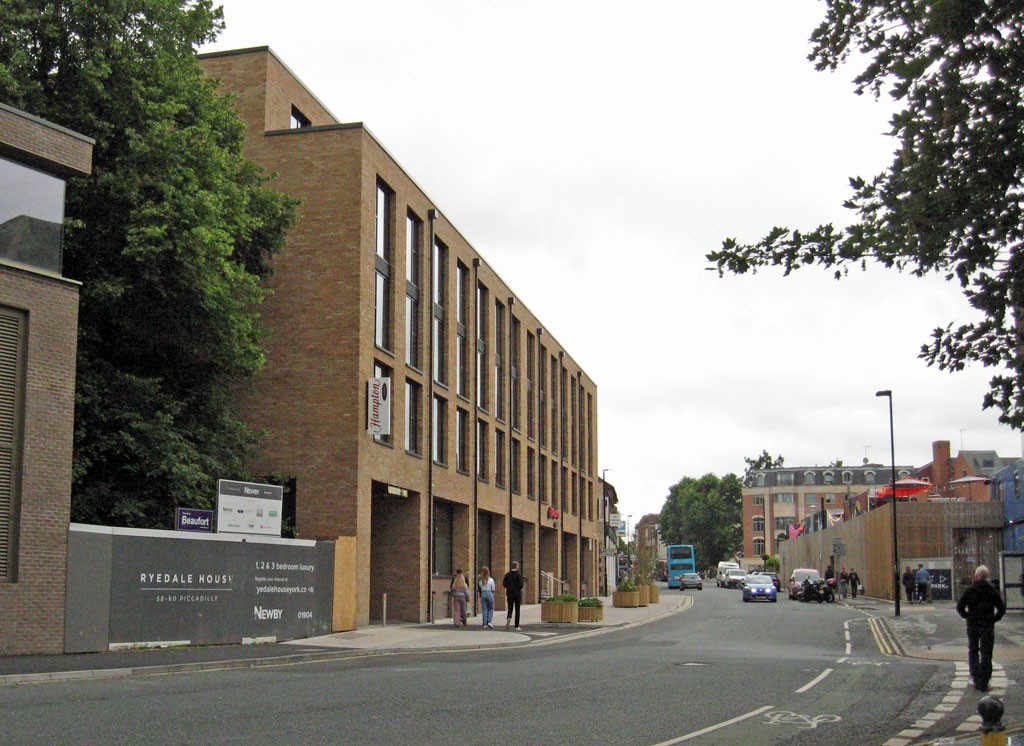 I’ve been thinking about York as it is now, and how it might be in the future. I’ve been thinking about property, all the parcels of land that make up this place. The way people born and brought up here often feel a sense of ownership, and whether we should. About York as a place for investing in, and profiting from. As a place for living in, freehold or leasehold. Whether it’s mainly for people passing through, or for people who want to stay here and put down roots – and whether they can, and if it matters.

Just one element of a fast-changing place. A place that has increasingly tilted towards the needs/wants of visitors.  It has felt at times like things are increasingly out of balance, perhaps best captured in a memorable photo of the new hotel on Terry Avenue showing it looming over the neighbouring terraced streets. Something I was reminded of recently by a photo of one of the cruise ships visiting Venice.

There’s clearly a lot of demand, and a lot of profit to be made, despite the recent pandemic situation. More hotels are planned. Plenty of money available for investment in these, for those in York for a holiday or on business. 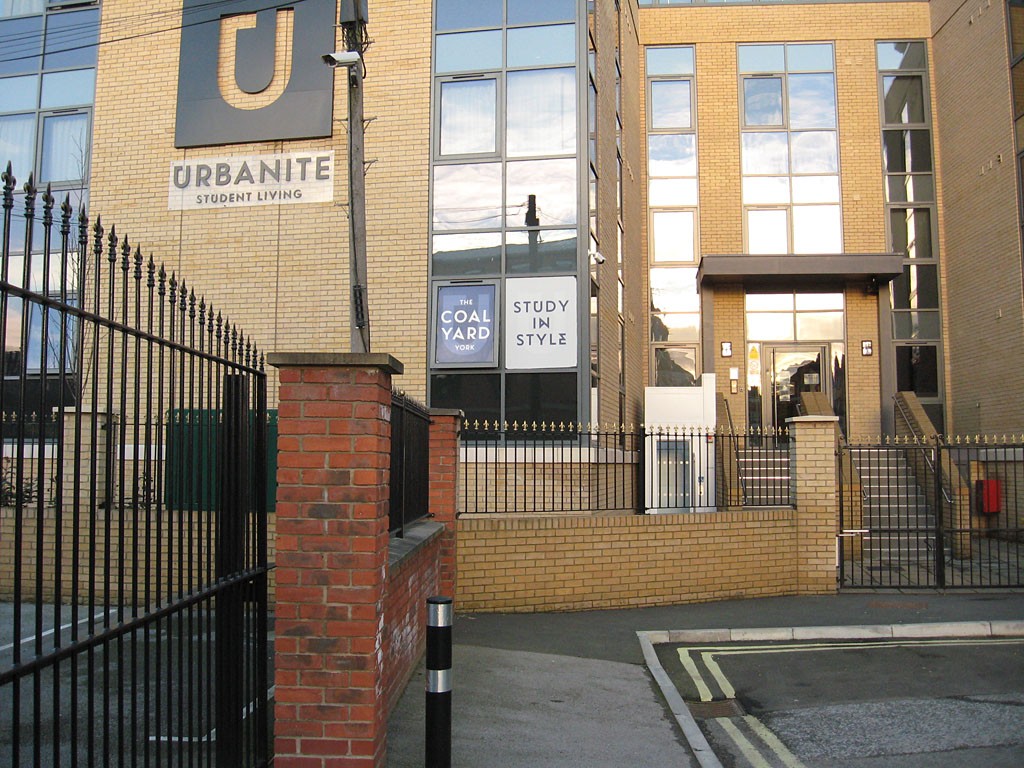 Student accommodation on the site of the former coal yard, Mansfield St

Perhaps some students, after finishing their studies, will want to stay in York, lovely place as it is. If they’ve lived in the student accommodation on Hallfield Road, or the Coal Yard, they might want to stay in the Layerthorpe area, and if so, might be interested in a residential apartment block that has been built recently on the corner of Redeness Street. Not far away, a massive new residential development is underway on the remainder of the huge gasworks site. Many, many apartments being built, here and on other ‘brownfield’ sites. The Rowntree factory building will contain hundreds more.

I’ve wondered if there’s really that much demand for apartments. The smaller and less expensive ones perhaps serve mainly as ‘a foot on the housing ladder’, a way in to property ownership in an increasingly gentrified and expensive city.

… Or, increasingly, as properties to rent out to the many people who haven’t been able to get to the first step on that climb. 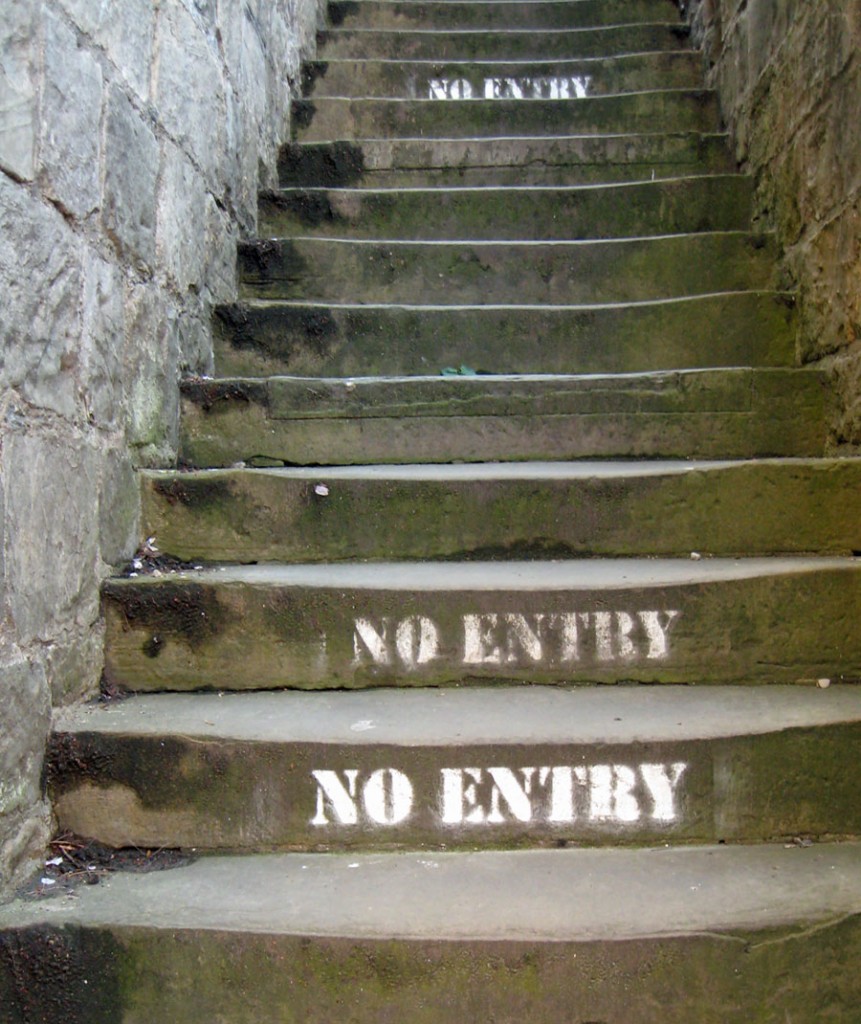 On the gasworks site, for example, the Press reported

Four hundred of the homes will be ‘built to rent’ properties – new developments designed specifically for renting.

Often, when walking through the streets in my area of town, I look at the kind of housing we used to build, and what’s generally being built now, and it doesn’t seem like progress. Council houses that were built between the wars look substantial and solid, with surprisingly spacious garden areas front and back. All that land that was available then. Now we’re having to reclaim old brownfield sites like the gasworks, and pile large blocks of flats on them, with most having communal garden areas rather than your own private space.

I assume that many people still want to live in a traditional house, with a bit of backyard or garden? But of course, here in York, that’s increasingly out of reach, with ludicrous property prices and not enough good wages to enable wider access to that kind of property.

I’ve sometimes wondered, in recent years, if I’m the only person who generally hasn’t felt delighted and proud when York has featured in one of those ‘best places to live’ features, like one in the Times, earlier this year.

When a family gets tired of London and starts yearning for the North don’t be surprised if they set their sights on York.

I couldn’t help thinking that it would probably mean loads of people on better money than the people already here, relocating perhaps from a more expensive place, rushing to buy property in this increasingly desirable and ‘vibrant’ place. Which appears to drive house prices up even higher for those already here who can’t afford it. And that seems to be what’s happened.

In past decades it seems it was generally possible for most people who wanted to buy a home in the city they’d grown up in to buy one, if they put the hours in at work and saved a bit, particularly if a couple worked towards that goal. I think it’s generally recognised now that this is no longer the case in York, unless you’re on good money, working in certain well-paid sectors.

I’ve been thinking a lot about this, how important it is, how it fundamentally affects a place, the feel of a place, if more and more people occupying it don’t have a real foothold in it. If their ownership isn’t freehold, but leasehold. Or if they’re only able to rent. And if an increasing number of people occupying a place are just ‘passing through’ – whether for a holiday, or for a few years as a student.

How will it affect how the city fits together, how it looks and how it feels, if most of the people in it have no real foothold here?

It’s some years now since I first heard the term ‘gentrification‘, and then saw it appear in a headline in relation to the Stonebow House redevelopment. ‘Gentrification’ maybe sounds like a nice thing, like everything’s going to be made nice and pretty, maybe with the local vicar cycling along and raising his hat to friends and neighbours, or some kind of 21st century version of that. But actually, of course, it means people being pushed out, to make way for the new things, the new money, to come in. And that might not be obvious, might not matter, until something that’s gone is something you’ve personally valued.

So, for many people, they might be missing seeing live music at the Duchess, or at Fibbers, since the Stonebow redevelopment brought an end to music there, and a planning application for the Toft Green building meant an end to Fibbers in that location. I wonder when gentrified York will get around to some kind of replacement venue. I guess it depends how much money there would be in such a venture.

Mention of the former Fibbers building on Toft Green brings me to one of the interesting happenings of recent months – the group of squatters who recently occupied the building. Before that, earlier in the summer, they first came to public attention by occupying the empty site near the Barbican Centre.

Even if I’m not writing about York on these pages, I still check the local news every day, to keep up with happenings regarding York and its buildings – the usual planning applications for hotels, student accommodation, coffee shops and bars opening – and this was refreshingly different. So much so that I ended up going over there for a look at the Barbican Centre site. They’d been evicted by then, but had drawn attention to the issue of ‘land banking’, and that this Persimmon-owned site had been unused for quite some time. 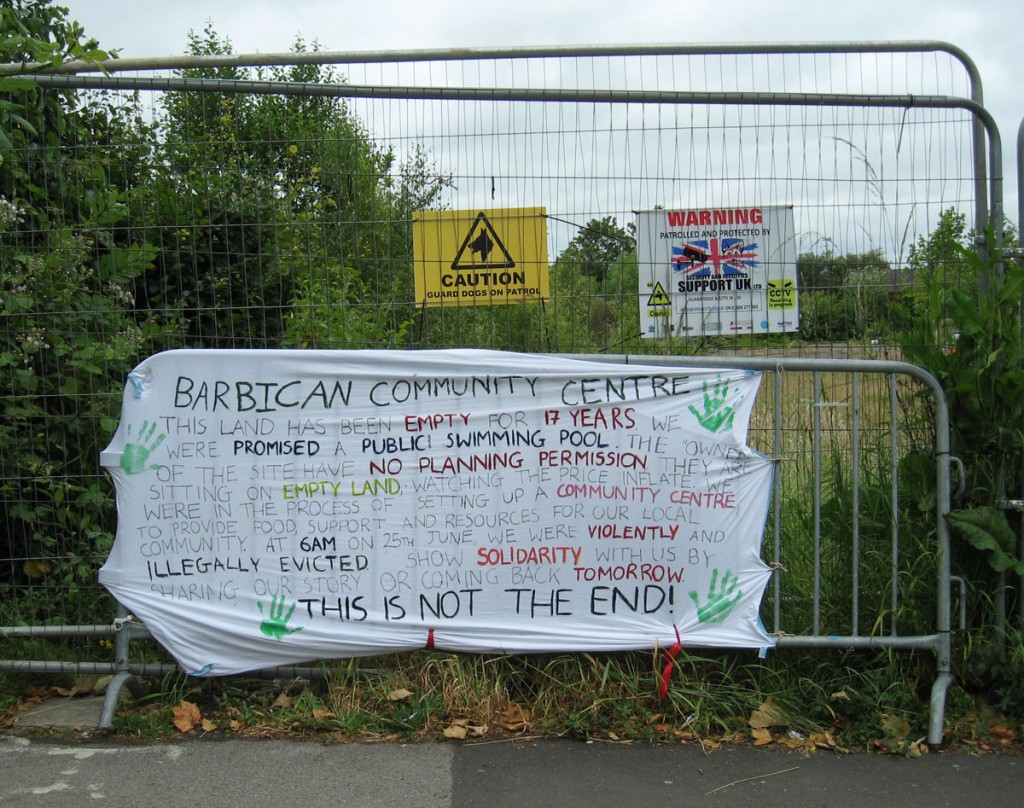 I’ve been reminded of the Rainbow Peace Hotel, set up by squatters in 2003 in the long-empty White Swan in Piccadilly. The group also occupied Burton Croft for a time. Both featured in my ‘York Walks': ‘Watch this Space‘, back in 2004.

What was particularly interesting about the recent Barbican Community Centre occupation, in its original site, was that it was on open land, not within a building. They appeared to be doing no harm, and trying to do some kind of good, but were, inevitably, evicted, by the landowner.

And in the end, it all comes down to this, to land ownership, property ownership.

Something I didn’t think much about when I started thinking about York and its changes, but in recent years recognise as the most important aspect of how the city develops, and who benefits from these developments. Who owns what is at the root of how the city fits together and how its land and buildings are used, and by whom.

Several articles in recent months have highlighted the purchase of properties on Coney Street by the Helmsley Group. North Star also seem to be acquiring property in the city centre. Both companies say that they’re locally based and that they care about the future of the city. If this really is the case, then that’s probably better than most of the city centre premises and building plots being owned by massive investment companies with no local connection. Perhaps the Helmsley Group will be able to remodel the riverside area where Coney Street properties back on to it, something that seems to have been an aspiration for some time. Perhaps North Star will be able to provide a music venue.

Since coronavirus came along and shook everything up, I guess we’re still waiting to see how the pieces fall back into place. It wasn’t like anything was certain before, and it isn’t now. But buying property of any kind in York seems a good investment, for those that can afford it in 2021, and residential property increasingly so.

Shame more people can’t afford just the one fairly humble home, while those with millions to invest can own so much.

Clearly this successful city has no problem in attracting investment. It’s going to make good money for quite a lot of people. But when I think about York’s present, and future, I think that things might look clearer, and brighter, if more of the people already here, who understand the place, and care about it, could afford to make a decent home on a bit of its land.

This carefully compiled cornucopia of content continues .. (with gaps). Been a long time. Ko-fi coffees contribute, and sustain it, thank you.