In 1843, T J Maslen published Suggestions for the Improvement of our Towns and Houses. He covers many cities and towns, including York. While Professor Simpson was asked to provide his vision for York, and was paid for it, T J Maslen appears to have just offered his, for free, from sheer enthusiasm for replanning towns. 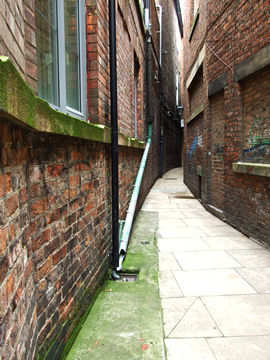 Mr Maslen wasn’t looking forward to seeing our city’s streets: ‘I was told they were deserted and silent, and that the grass grew in them’.

When he got here, he found:

‘a small filthily-dirty, confined town, not much larger than Chester, built all awry … thousands of filthy, "cut-throat looking" lanes, courts, and alleys, many of them scarcely wide enough for a wheelbarrow. And so far from grass growing in the streets, there was such a crowded population on one particular day, (when they all came out of their dirty lanes,) that I found it no very pleasant job to squeeze myself through them.’

He’s disgusted by ‘the horrible filth scattered about in every direction’.

Mr Maslen liked the new Parliament Street, indeed is a fan of grand wide streets, and soon lays out his plans for creating some, by bulldozing any historic building that gets in the way of his imagined boulevards. He proposes, in some detail, an entirely new ground-plan for York, with roads arranged on a more geometrical pattern, and with the Minster in the centre.

In moving to these enhanced new streets, residents would be ‘forced to quit those thousands of nasty courts and alleys in which they burrow and seclude themselves’. 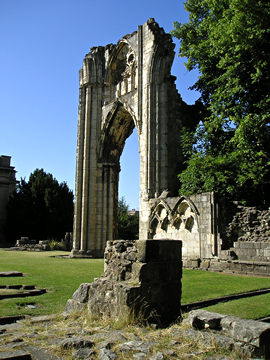 St Mary’s Abbey – bulldoze it and get a nice wide road through here.

One of his wide new roads would run from the Minster’s west front in a straight line to the Ouse:

‘a handsome street should be opened, thirty yards wide, and carried through every opposing obstacle or building, down to the River Ouse, in a perfectly straight line. This street should consist entirely of shops on both sides. It would pass through part of the Manor-house, along the back of the Yorkshire Museum, (which might then have an additional front to the new street,) and sweep away part of the ruins of St. Mary’s Abbey, which cannot be helped; but the materials of those ruins might be built into and preserved in some other ancient looking edifice.’

On the other side of town:

‘A new straight street should be built from St. George’s Bar to the South end of Parliament street, with a new bridge over the River Foss in its line. This new street would form one line with Parliament-street, and both together a magnificent street, if of the same noble width throughout.’ …

… The less than magnificent Piccadilly arose some 70 years later.

‘Improving’ the river frontages is a recurring theme in visions for the city – then and now. Here’s Maslen’s idea:

On either side of the river would be new houses, all facing the river. This concern with having every building on the riverside facing it rather than backing on to it continues in 21st century visions.

Maslen also has concerns over the aesthetically unpleasing river traffic. He’s particularly against the sight of ‘dung-barges and coalboats’.