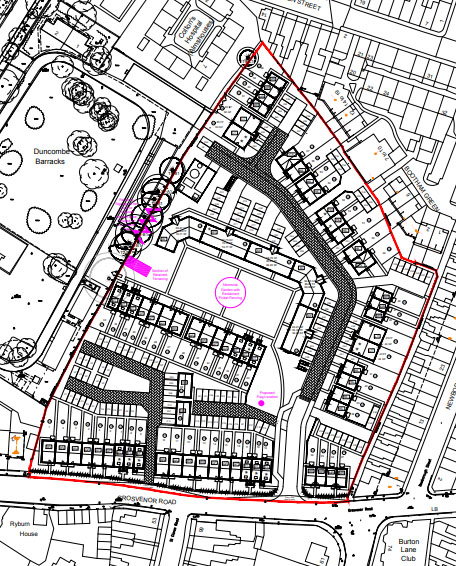 Since then, a few new documents have appeared for our perusal, on the planning portal, dated 20 December. See this link, or search for 19/00246/FULM via planningaccess.york.gov.uk/

I thought I’d mention a few of the more interesting points I’ve noticed.

There’s no new written information as yet, just a couple of huge and rather detailed visual representations of the site layout, and some more information on house types.

I suspect most readers won’t be much interested in house types, but the changes to the layout are interesting.

The layout includes a memorial garden that is more central to the housing, rather than on the western edge.

A flagpole is also included, to the south-eastern side, where a path leads in to the memorial garden area. 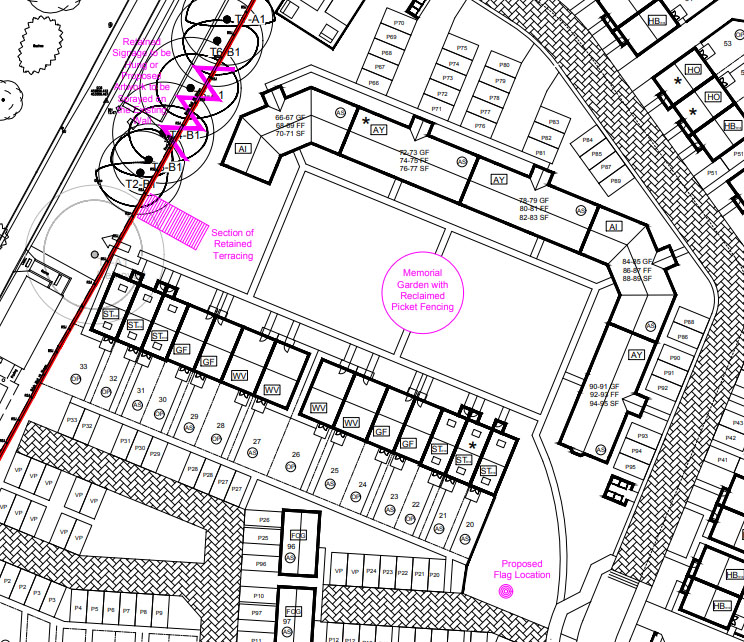 A report written some months back (18 April) by Jonathan Kenyon at the city council recommended these elements in a revised design of the site. It’s available on this link (PDF) or via the list of documents for the planning application (ref 19/00246/FULM).

Elements that have been identified in work by Historic England and which should form part of the sites character include historic retaining walls (this includes a narrow section of the wall on the south side with reveals by the site entrance), retention of part of the tunnel beneath the west stand and re-use of the historic terraces (taken from the west or south sides) and timber fencing.

I’d like to read the original report by Historic England that this report refers to, but it isn’t available on the planning portal documents.

An appendix at the end of the report goes into more detail on what should be preserved/reused. It includes:

… As a lasting legacy, create a focal point for memory and orientation. The western boundary wall supports the back of the Popular Stand and forms part of a unique tunnel beneath the stand. The tunnel permitted rival fans to switch ends at half time but has been disused for some time.

…Memorial garden bordered by a wooden picket fence reclaimed from in front of the Popular Stand. (There will be no memorial garden at the new stadium). The one at Bootham Crescent will therefore provide a home for any existing memorials, ashes and interment caskets (subject to family wishes) but also future interments.

… Another seemingly unique historic feature of Bootham Crescent was the lowering of the club flag to signal that there were 5 minutes to go before the end of each match. The flag flew from a flagpole originally located between the south-east corner of the pitch and the main entrance. It is proposed that a new flagpole is erected as close as possible to this original location, and that it flies a replica of the club flag as a permanent and symbolic reminder of fans’ allegiance to Bootham Crescent.

Looking at the revised plans now available it seems that most of the suggested elements have been incorporated. Looks like this doesn’t include the retention of the historic walls near the football ground entrance, however.

The angle of the road at the north-western end of the site is different from the original proposal, having dropped slightly, to join the western boundary where it appears it could link up with a road that may one day be part of the adjacent site, the Duncombe Barracks site, which I’ve written about before, and which is now council-owned. 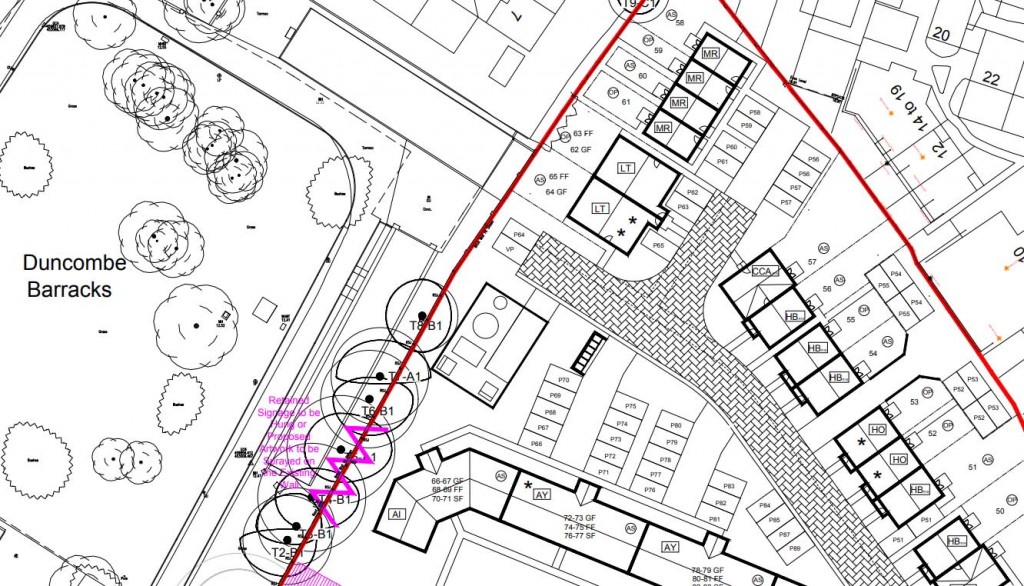 More on that later perhaps.

Other recommendations appear to have been ignored, on heights, and distances, on the southern boundary. But I won’t attempt to cover that here. I don’t like writing about this, it’s all quite depressing. I hope that York City fans find the revised plans better than the previous ones. That’s all I can say on the subject just now. No doubt there will be more in the local media on this in due course. In the meantime have a look at the planning portal for the documents mentioned above and any others that appear after the Christmas and New Year break.

Thanks for your virtual coffees in support of York Stories.