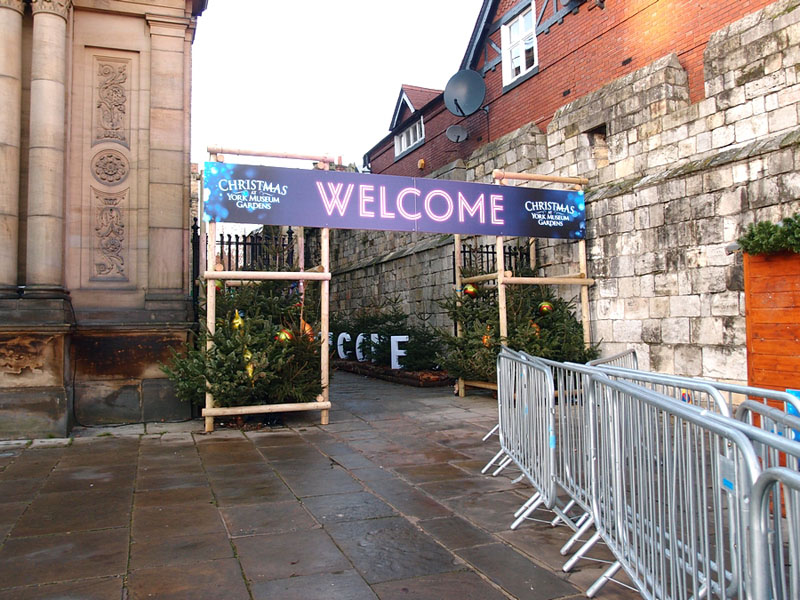 Entrance to the festive attraction, by the side of the art gallery

This year, since mid-November, many people have been visiting the Museum Gardens for a new Christmas attraction, ‘an after dark magical experience in an illuminated wonderland’, as the Facebook page puts it.

I wandered through with as open a mind as I could manage, despite the fact that I’d had a bad feeling about this from the start, for various reasons previously stated.

Initial impressions, as I walked through the tunnel near the entrance, were of quite a bit of effort going into this seasonal display. 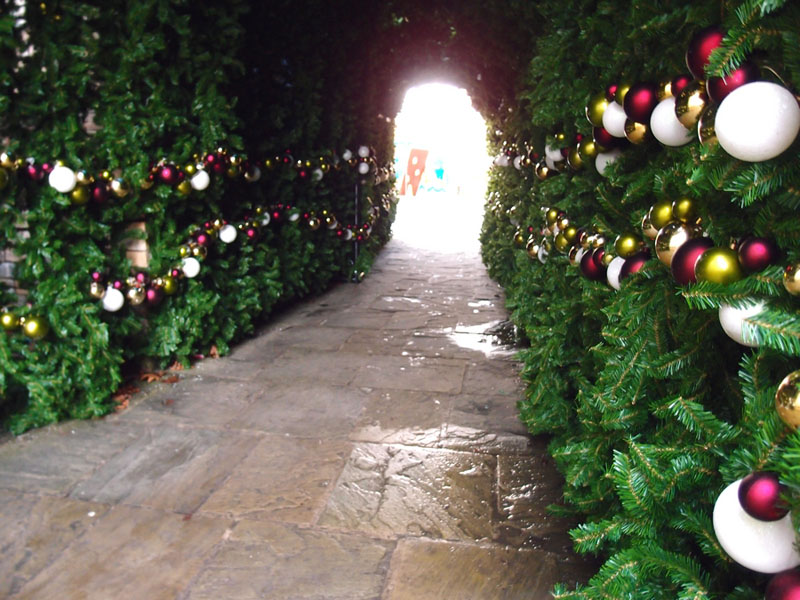 Emerging from the tunnel you’re then faced with wooden huts selling food (closed of course when I was there) and a small carousel, and some pleasant enough decorations. 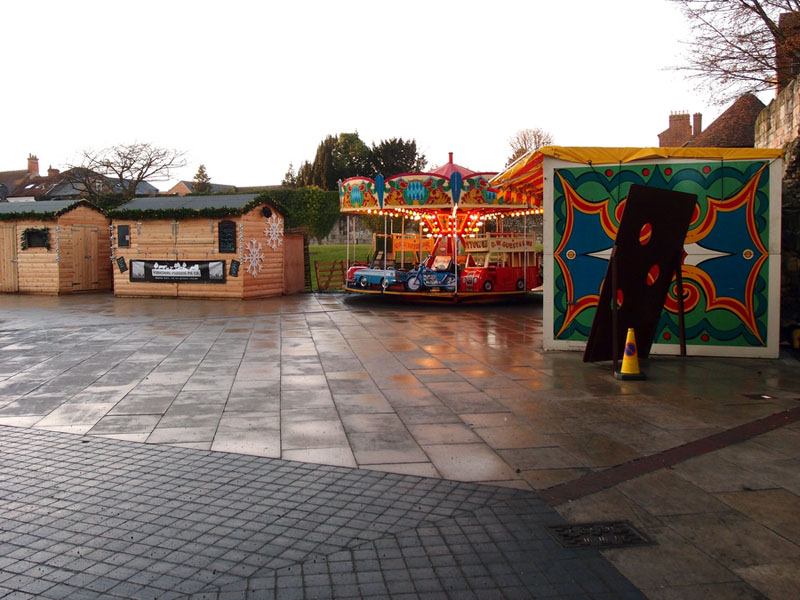 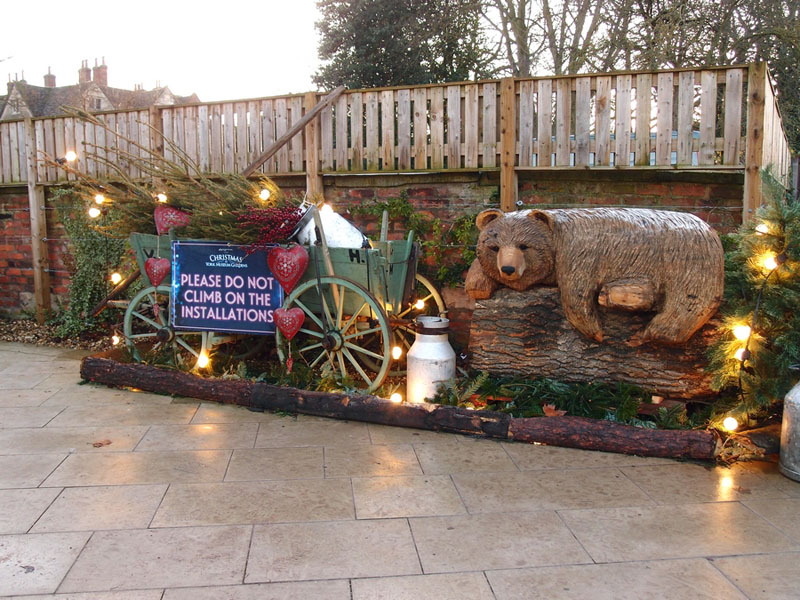 I’ve read through many of the visitor reviews, positive and negative. Quite a lot of negative. Similar comments were made by many reviewers.

The ticket price is seen as too high even by those who had an enjoyable time. People are annoyed at having to pay another £1.50 for a marshmallow to toast over the fire at the end of the walk. Among those who are unhappy, and there are many, the phrase ‘rip-off’ comes up over and over again, and looks especially bad when phrased as ‘I feel ripped-off’, as many visitors have written. As a York-born person who has been visiting these gardens for decades I’m rather sad that a place I’ve always had a fondness for has left people with that feeling.

Back in early September when the event was first publicised I had a few thoughts/concerns, but hadn’t given the subject any thought since, until a comment on a story in the Press led me to read reviews of the event on Trip Advisor.

According to the comment York’s Museum Gardens had been at number 7 in a list of things to do in York, but by 2 December when the comment was made the gardens had slipped to number 15, and at the time of my writing this, 26 December, they’ve slipped further, to number 21.

Let’s continue the wander through in daylight, with photos I took on 18 December.

In the newish area of the Edible Garden framed illustrations were placed in the flower beds. 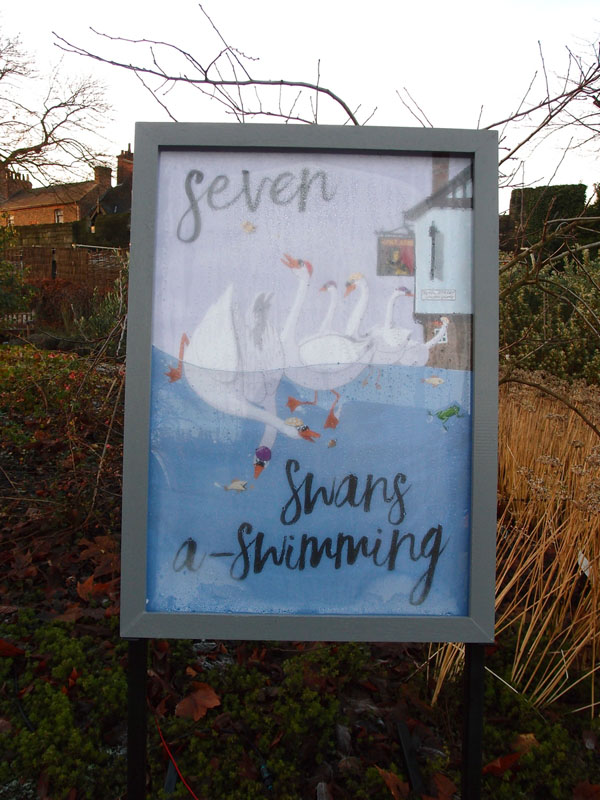 The illustrations, taking the 12 Days of Christmas as their inspiration, appeared to be the only element with a sense of place and a link to York, containing recognisably local buildings and details.

These York-themed illustrations would be nice as greetings cards or postcards, perhaps given to the paying customers as a memento of their (expensive) visit. I found it hard to understand why they were displayed in that way.

Moving on to the next area, a former bowling green near the abbey ruins. 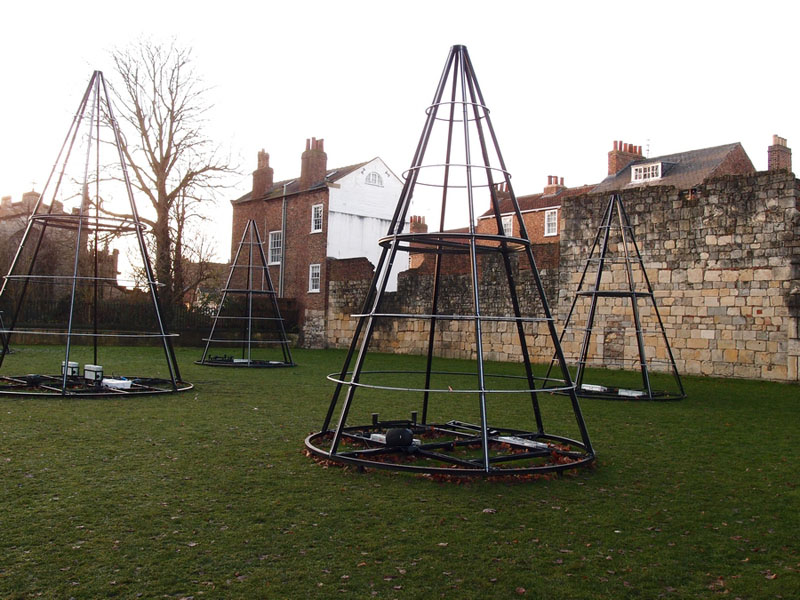 Here were structures that one reviewer, Jan D, memorably said she thought were ‘reminiscent of the tee pee frames that my husband grows his runner beans up’. They reminded me of climbing frames, but I’m assuming that they’re not for climbing on, but for looking at. There were many signs forbidding climbing on the installations.

Many of the reviews mentioned the mud. Here in front of the former bowls pavilion (now a café) it became obvious what they meant. 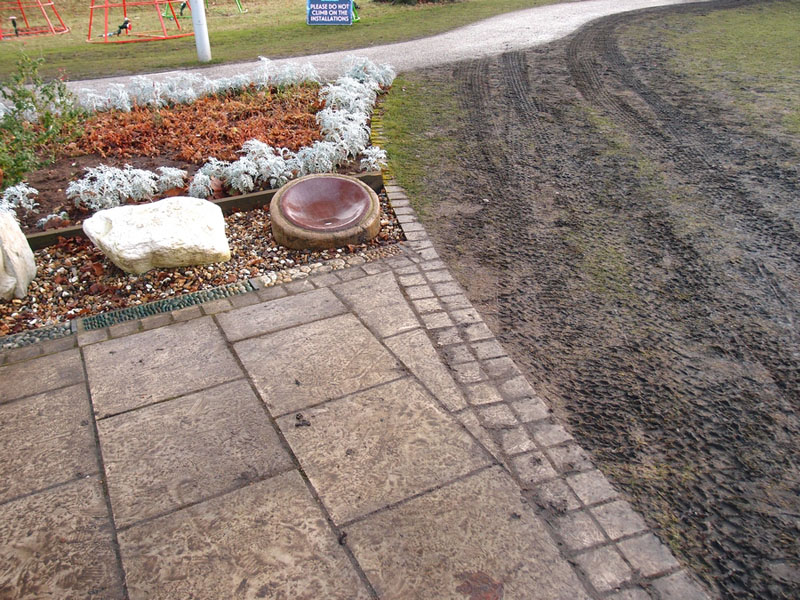 In front of the pavilion there’s now a beautiful mosaic, which I may write about another time, as at the moment it’s looking a bit grubby and muddy, like everything else.

Obviously muddiness is a feature of this dank and cold time of the year, but there are well-surfaced paths through the Museum Gardens, and I don’t remember seeing this kind of muddy mess in previous years. 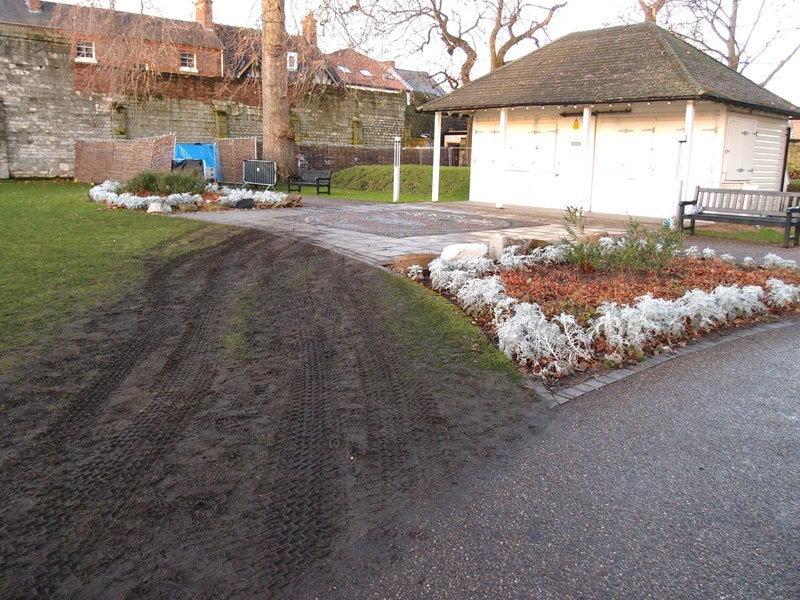 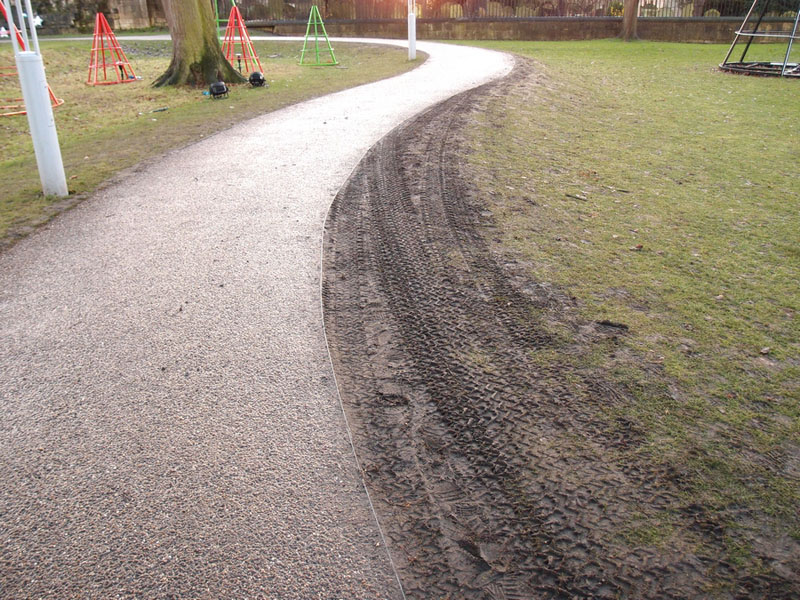 At the corner near the main part of the abbey ruins we reach peak muddiness, with a rather sad-looking mud-spattered star. Maybe this was cleaned up before the paying visitors arrived. 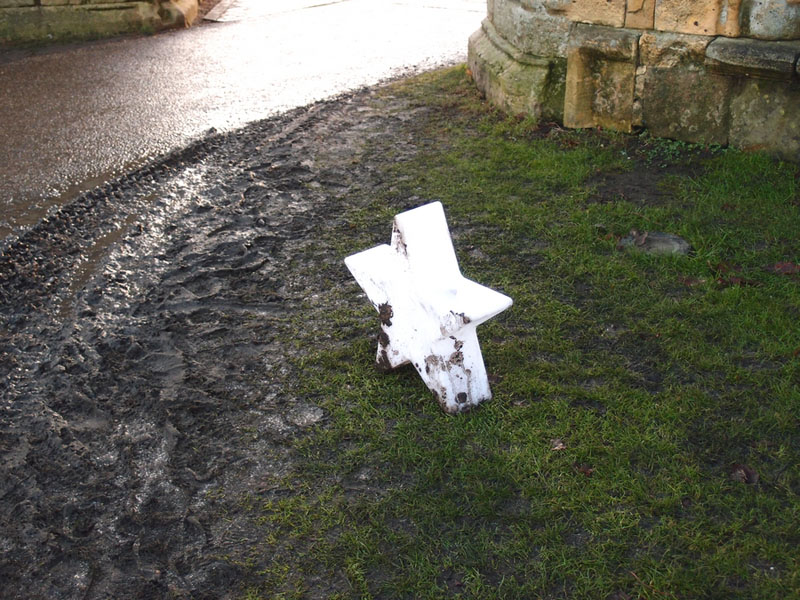 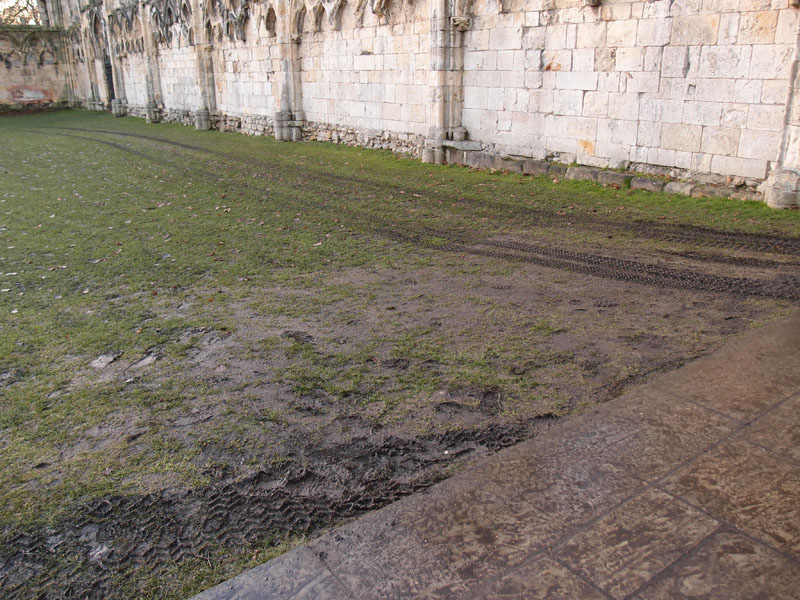 Looking back towards the side of King’s Manor and the art gallery, globes on the grass behind a No Entry sign. Not clear whether the paying visitors can get close to the globes when they’re illuminated, or whether they just look at them over the fence. 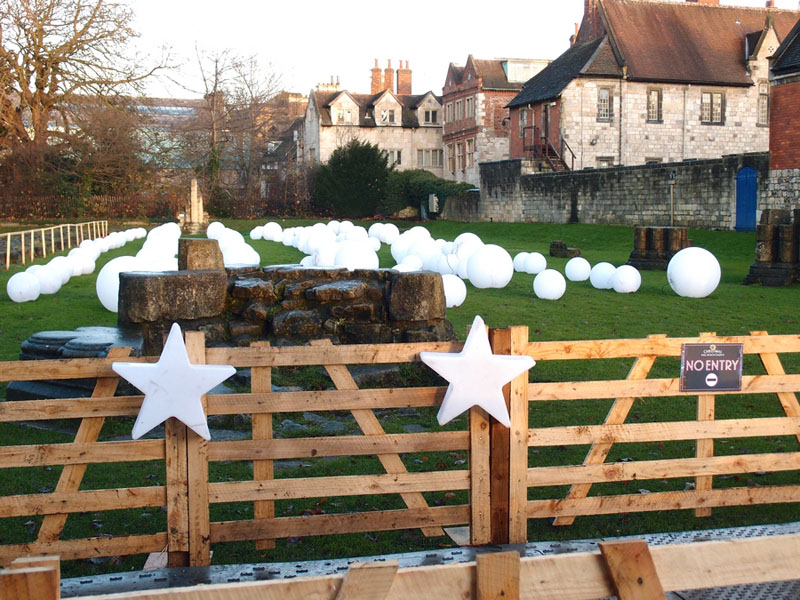 From the front of the Yorkshire Museum, looking across the lawn. 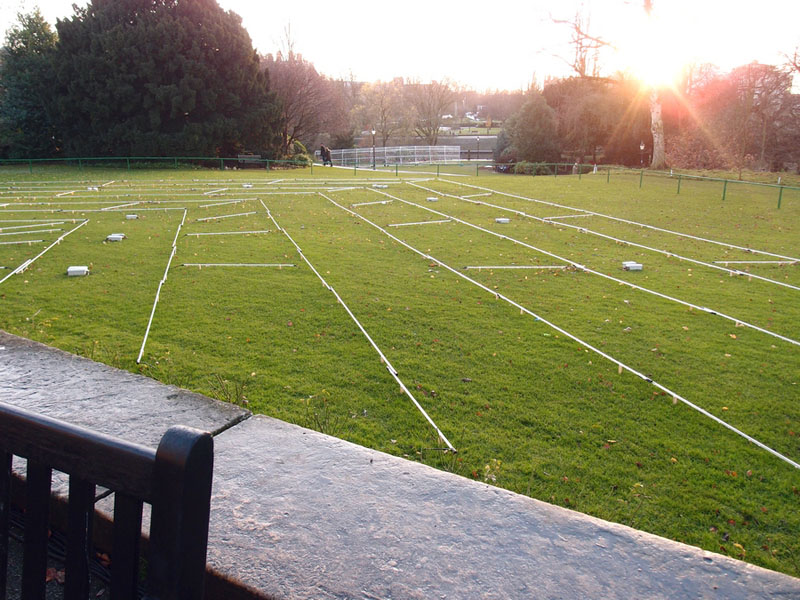 There are other illuminated bits apparently on the paths nearer the river. I missed those as I headed straight for the Museum Street entrance. 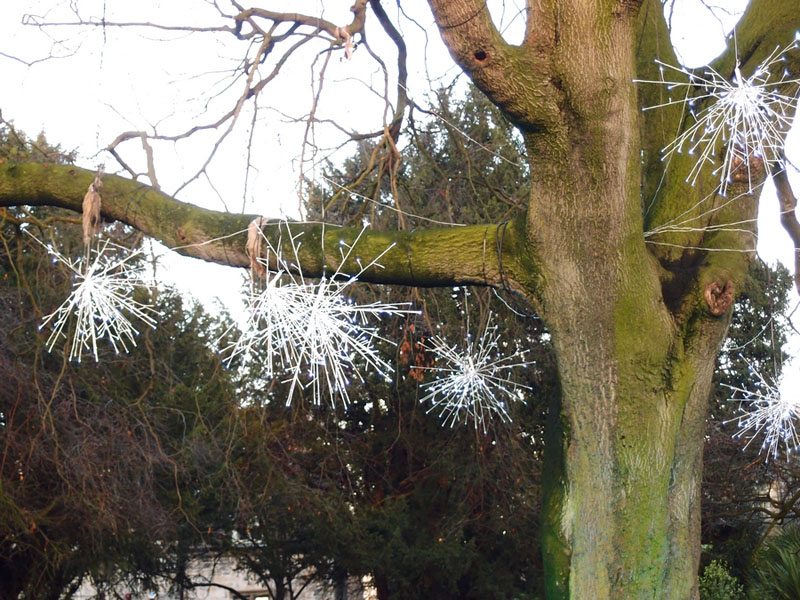 Then letters, spelling out seasonal phrases, with another stretch of mud. 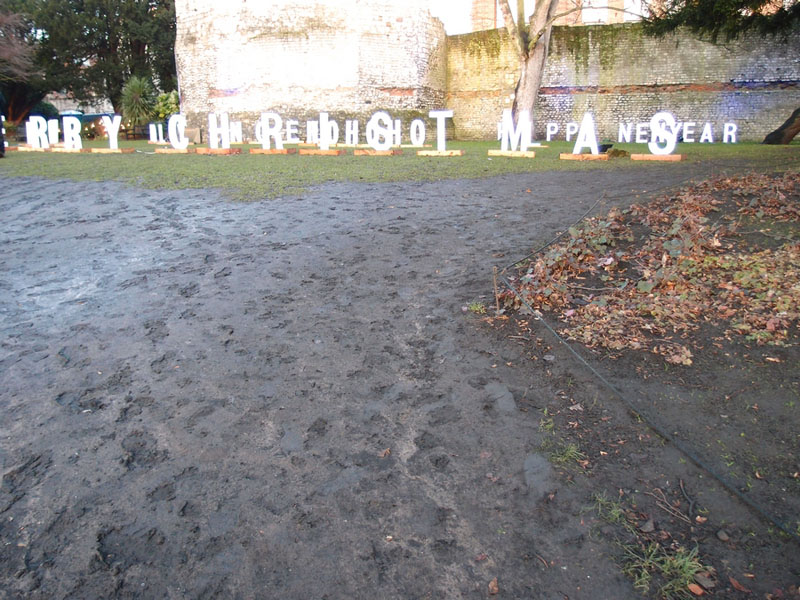 York Mix included a page of photos of the illuminations as paying visitors see them in the evening, useful for anyone wondering whether to visit.

‘More the Disney kind of Christmas’ wrote Charles Hutchinson in a review in the York Press.

I thought it worth a wander through in daylight, with my camera, to give a different perspective.

While wandering through I also noticed this sign, clarifying the (altered) closing times. 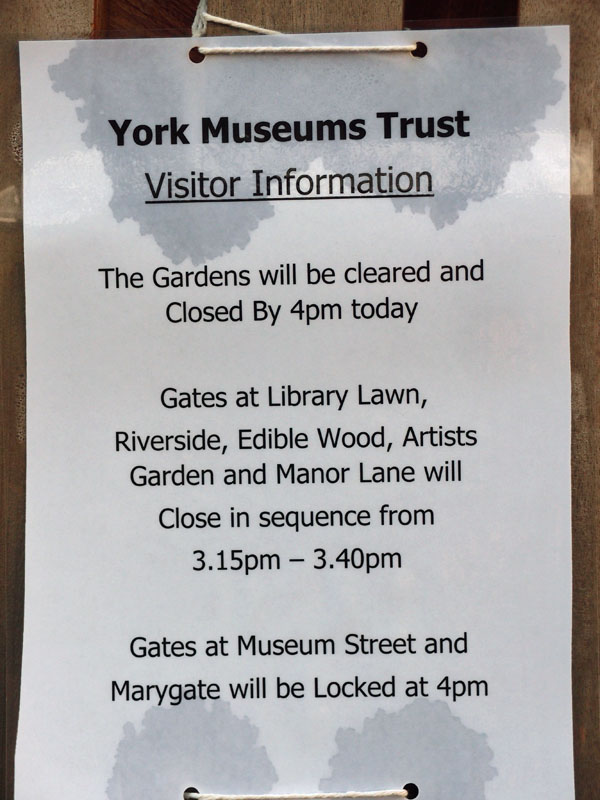 ‘The Gardens will be cleared and Closed at 4pm today’.

Recently York Museums Trust asked York residents to support them in the council’s budget consultation. I’d like to have favourable supportive feelings about YMT, I really would. But signs like that might tend to alienate people.

That’s not friendly language. ‘Cleared’. Rather jarring I felt, as we’re talking about local residents and visitors, not clearing up rubbish. No ‘apologies for any inconvenience’ or ‘thank you for your understanding’.

So ‘our’ Museum Gardens have been closing early every day for some weeks so that some income can be raised from paying visitors. Many of those visitors, who paid a lot of money for this much-hyped festive attraction, seem deeply disappointed, use words like ‘disgusted’.

‘York should be embarrassed’, said one reviewer. Maybe we should all be embarrassed, or at least a bit bothered, that this kind of profit-driven event is becoming the kind of thing relied upon to provide income to support the things council funding used to support. I assume that’s what it’s all about. Rather a complicated structure now, with York Museums Trust managing the Museum Gardens, and with Lunchbox productions putting on this event. Not clear how profits from this event will be divided between YMT and Lunchbox, but hopefully there’ll be enough profit to pay for some new turf.

Many people are making good money from their contributions to York’s ‘cultural offer’. I’m not one of them. But I do think it’s important to have different perspectives, which is why I keep writing this — a resident’s record of York and its changes — as often as I can. It takes time, money, and effort to keep this ‘cultural offer’ of mine online. The website hosting fees are increasing in January 2018, and I really do need to get around to selling my work rather than giving it away, but until then, if you’ve found these pages useful and/or interesting, here are a couple of ways to support this work. Thanks.