Hungate area developments: then and now 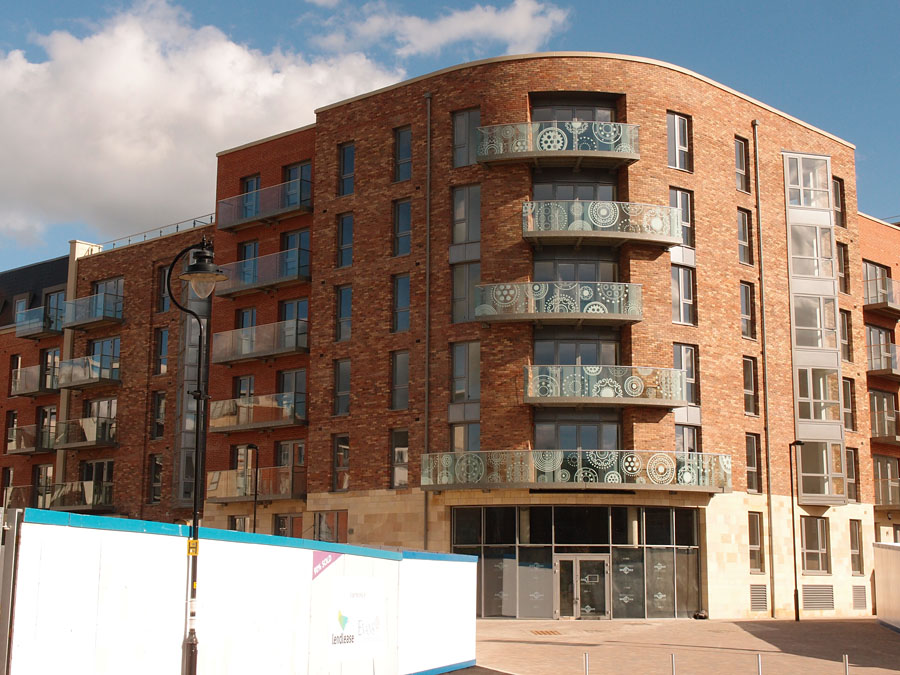 On the way to Lawrence Street I walked through the Hungate development. The most recent block of residential development has been unveiled. Its curved corner, facing the Dundas Street/Palmer Lane corner, is shown above. This new development is alongside the Foss, opposite Rowntree Wharf. 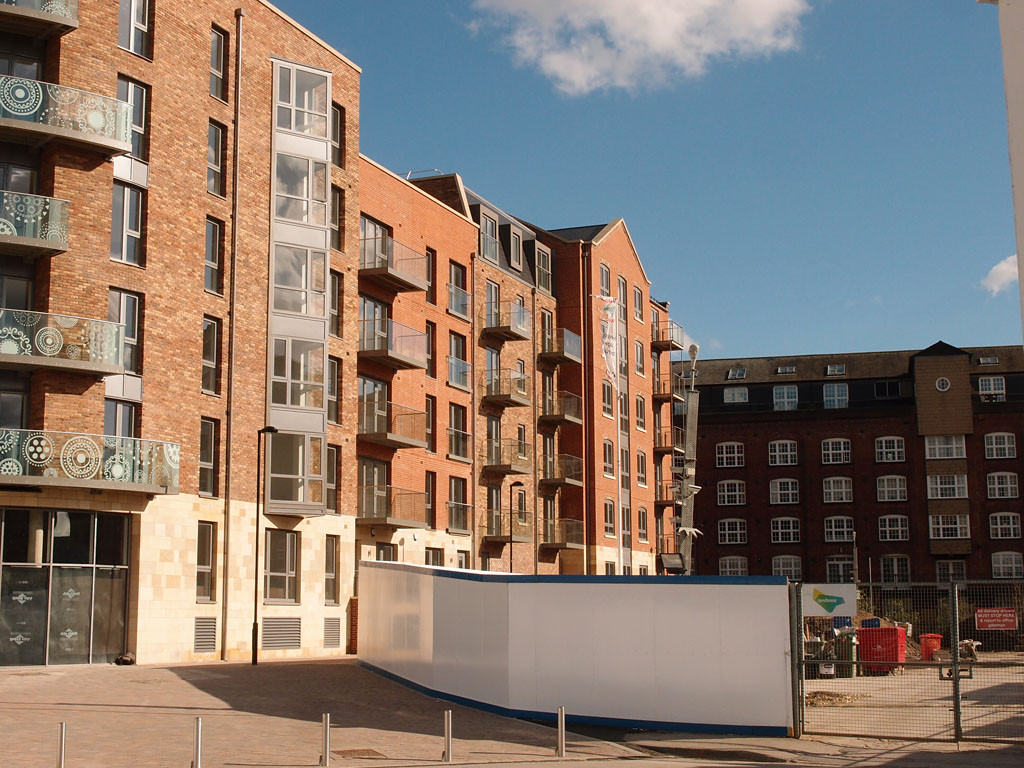 The new build is tall, but so is Rowntree Wharf, and indeed everything appearing here is lofty, replacing the low ranges of light industrial units that occupied the site through the second half of the 20th century. The new buildings look good in the sunlight, though as each block goes up it blocks the light from the buildings around it.

Looking through these photos reminded me of how many I’ve taken in the Hungate development area over the years. I thought it might be interesting to include some ‘then and now’ views.

This photo dates from ten years ago, when the site had been cleared and hoardings were up around the various plots. Note the Foss Islands chimney in the background, a useful landmark for getting your bearings: 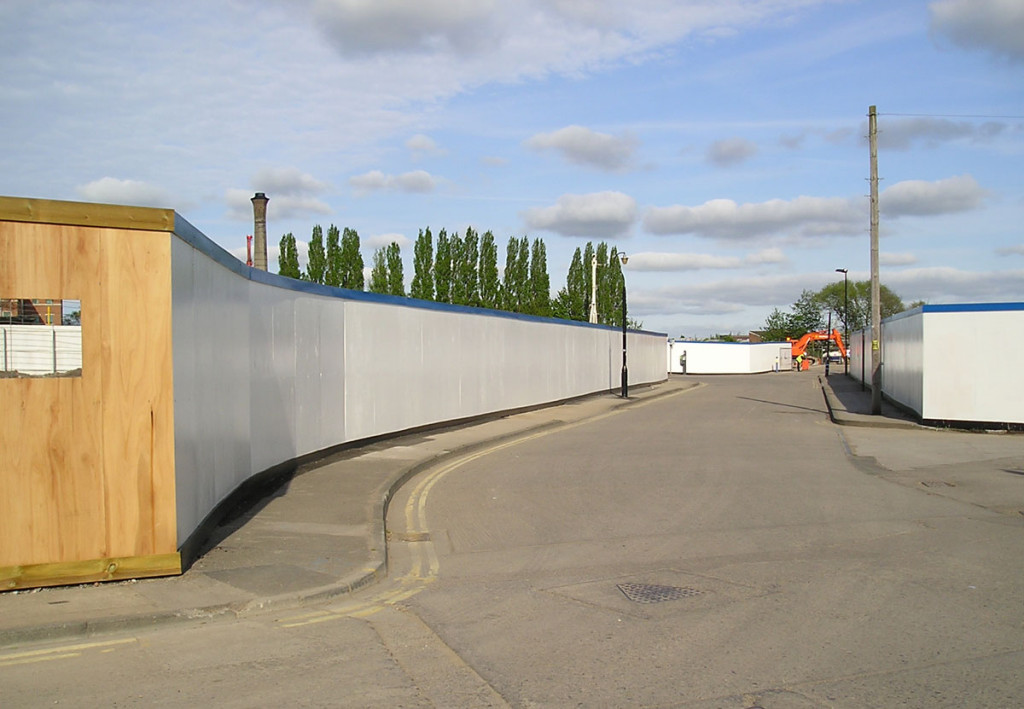 The photo above was taken at what is apparently the junction of Carmelite Street, Hungate and Palmer Lane, though I confess I had to look up the street names on the map as this area has changed so much it’s quite disorientating. 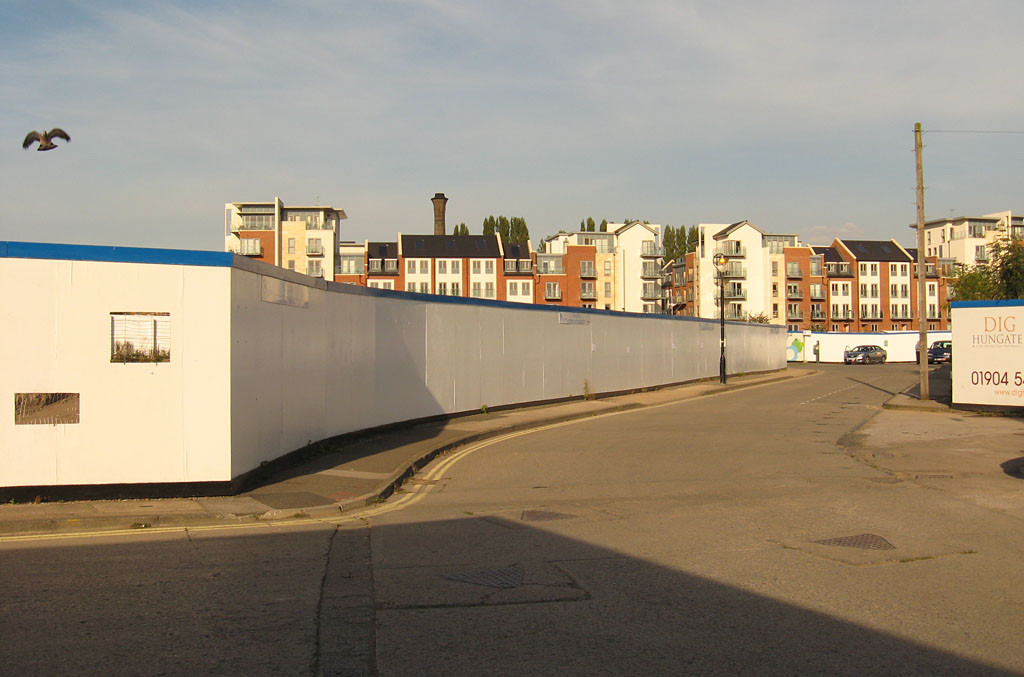 By 2010 the first residential phase of building had been completed, creating a new street off Dundas Street.

And again, from roughly the same place, standing a little further back, the area as it looks now in spring 2017 (again, the chimney on the horizon may help with location and orientation): 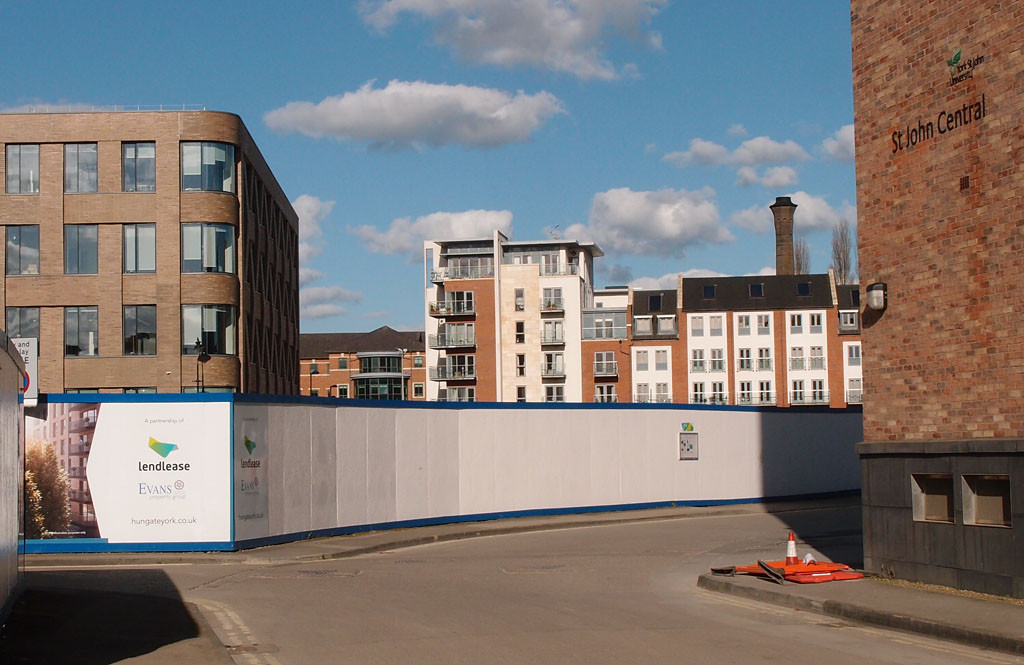 On the right of the photo, in Carmelite Street, is St John Central (student accommodation). On the left is the side/back of the Hiscox building, which faces onto Peasholme Green/Stonebow. The recent residential build pictured at the top of the page is on the right if we continue straight on from here, following the road round that curved hoarding.

Eventually, presumably, the still-empty site inside that curved hoarding will also house a building, blocking the view shown above, and blocking light from the buildings behind it.

I had a half-hearted attempt at looking for information on the recently completed block here at Hungate, but found my search results were mainly ads for the properties, for sale or rent, at prices I doubt many people can afford.

On my wanders through the area I’ve usually also headed for the footbridge over the Foss to the walkway alongside Rowntree Wharf. Again, a comparison of ‘then and now’ photos suggests itself. Firstly this ancient image from a whole 13 years ago: 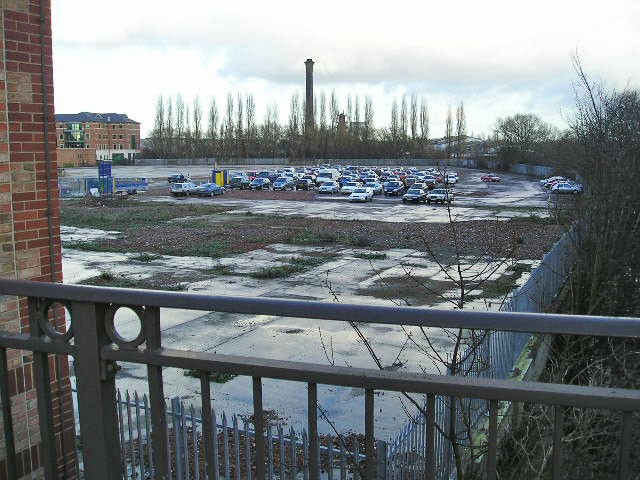 Yes, January 2004. It’s not very big, because back then we didn’t have such high resolutions on our digital cameras, and rather small memory cards inside them.

Again, notice the Foss Islands Road chimney as a landmark. The photo was taken from the corner of the footbridge over the Foss, which is off camera to the right. The corner of the building in the foreground on the left is the Shambles multi-storey car park, dating from around 1990. 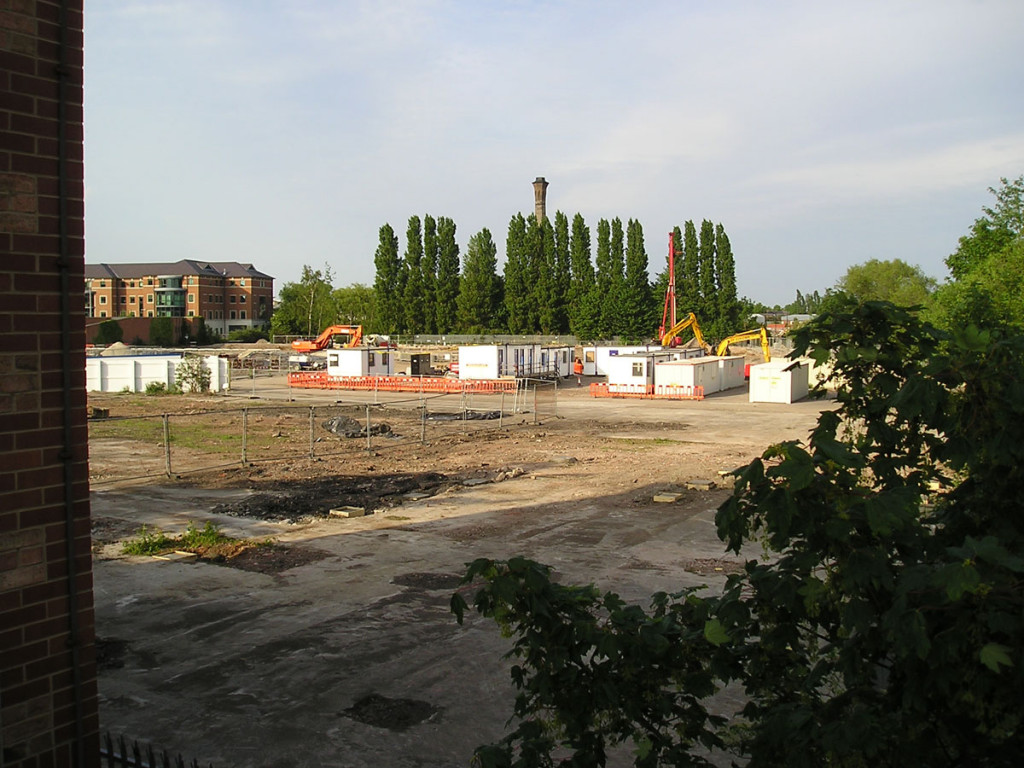 Hungate area from the Foss footbridge, 21 May 2007

No longer being used as a car park, and with signs of work underway on part of the Hungate redevelopment. 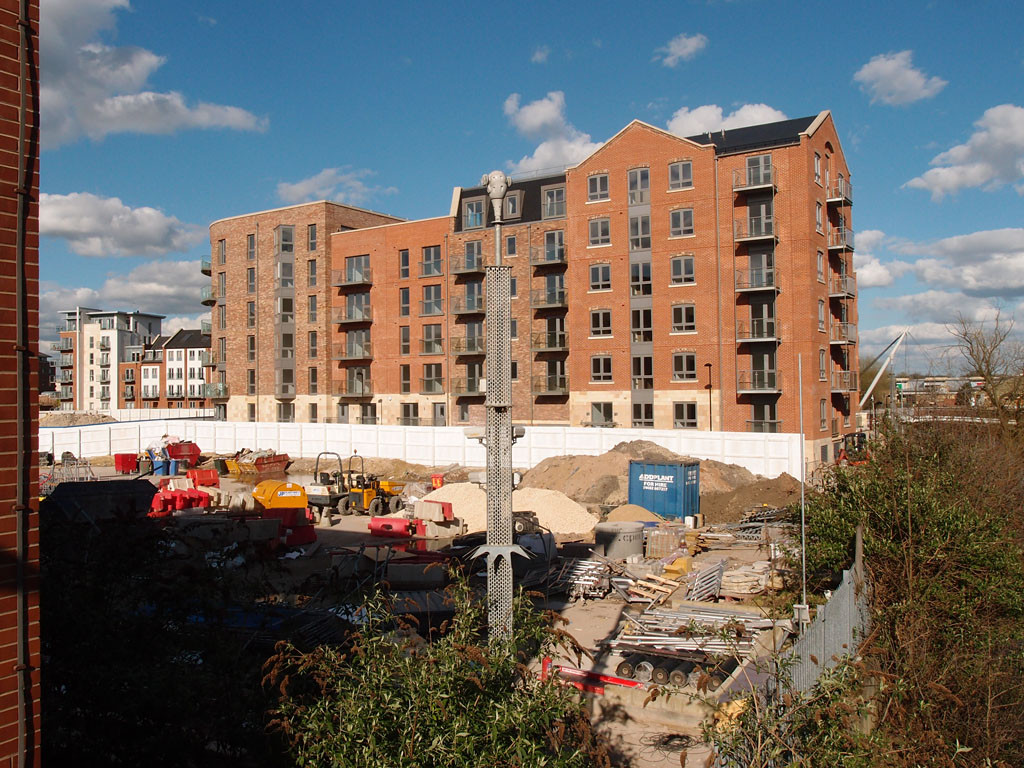 The wall of the multi-storey car park still there on the left as an anchor to orientate ourselves, but the landmark chimney no longer visible, hidden by buildings — the first phase of building in the background to the left of this view, the most recent block dominating the centre ground. The Foss, still there off camera to the right, showing different reflections now.

Following the footbridge, to the side of Rowntree Wharf, gives us a view looking back over the Foss, towards Stonebow, with the Minster on the horizon. Here’s how it looked in 2011: 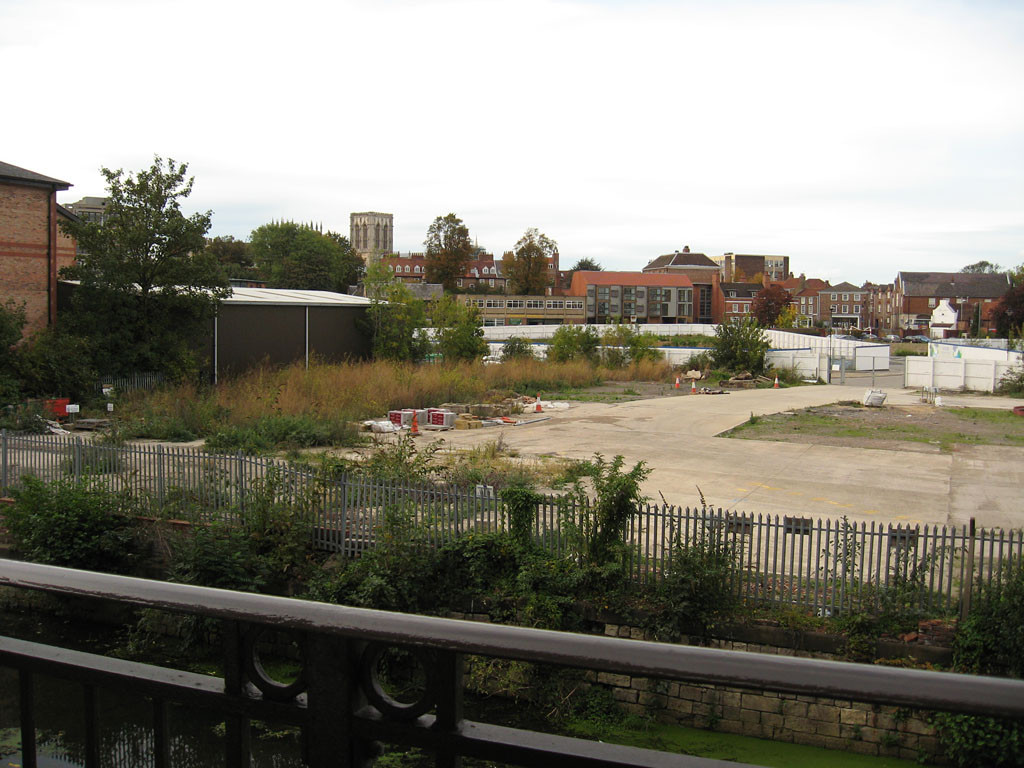 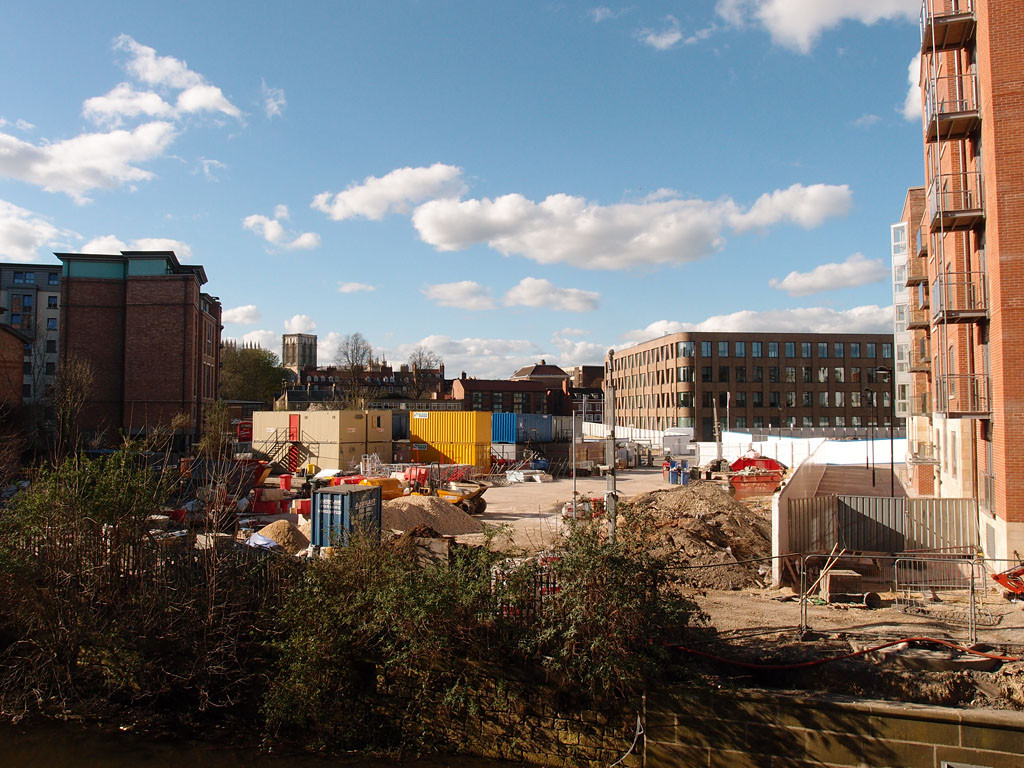 On the left, the block of student accommodation, on the right the recent building, and between them the back of the Hiscox building.

Quite dramatic, the changes here. This area was one of the first places I visited in my ‘York Walks’ of 2004, and it has been interesting to keep going back every now and then.

Those lengths of painted hoarding have been in place for quite some time. They’ve been used to display old photos of the area and also children’s artwork, which is a nice idea. I wrote about an earlier display some years back. The current one, just behind the Hiscox building, has some lovely pictures of wildlife: 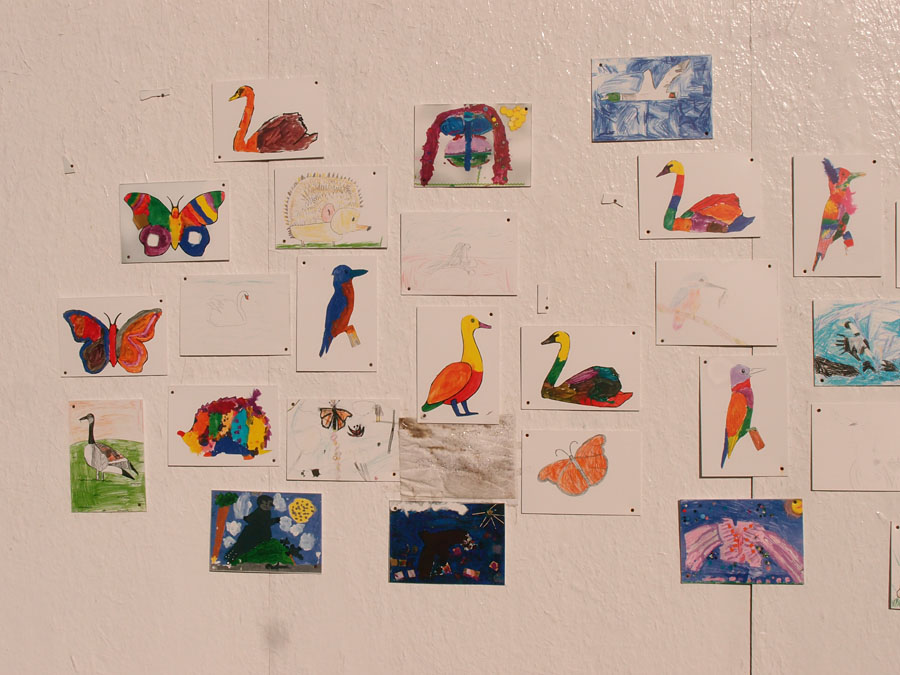 Hedgehogs seem to be popular: 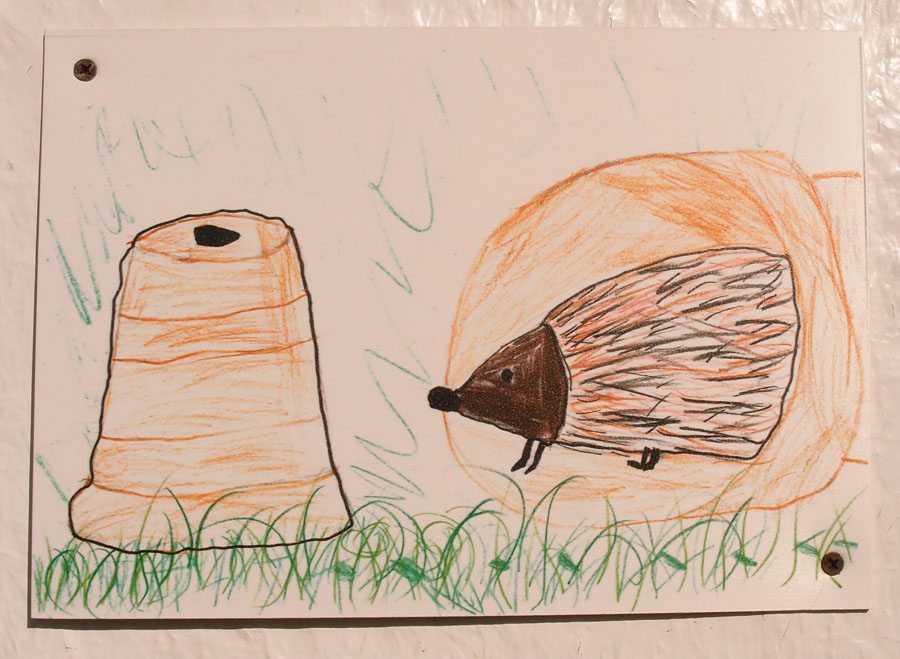 This is perhaps in connection with a wildlife area nearby, next to the Foss. We may explore that later.

For now, I hope you’ve enjoyed our Hungate wander. My new ‘tip jar’ is below …

And following a request from a reader, there’s a Google map to accompany this page, to help you get your bearings. It’s on this link.

It takes 3-4 hours to make a page like this.

From finding the right photos, to optimising and uploading them, then writing the page, with several re-readings and edits to make sure the text is as clearly written and as helpful/interesting as it can be, then adding in links to the other relevant pages, etc. In recognition of this, and the fact that this carefully compiled community-minded resource has been maintained for so many years, readers have asked if there’s a way to express thanks and offer support. So there’s a new way to do that, via the button below.

With thanks to readers for the 9 coffees received since the previous page — which have helped to power this one.

By Lisa @YorkStories • 18 April 2017 Changes, Wanderings
Tagged  Hungate
To link to this page's proper location please use the > permalink