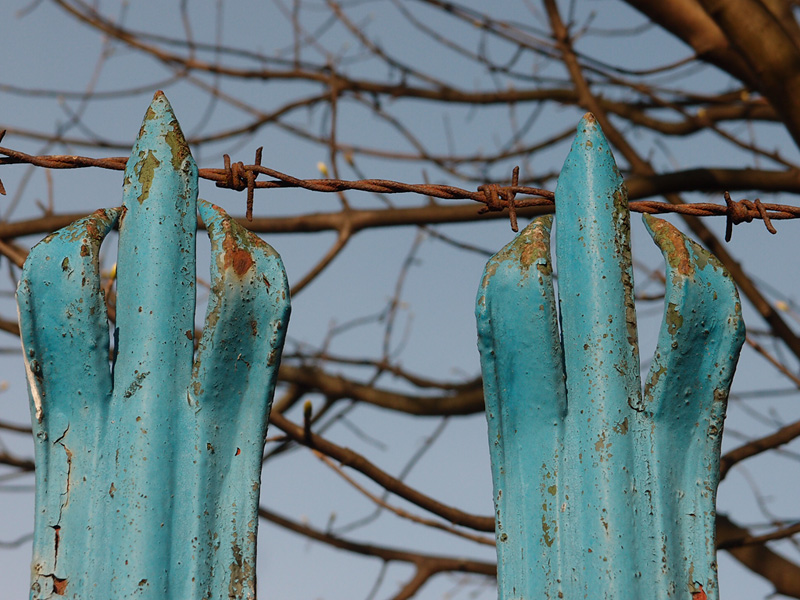 This week we’re heading (again) down the snicket between Heworth Green and Layerthorpe, by the side of what’s left of the gasworks site. Its boundary is still marked with now rather rusty railings, painted with a colour I’ve heard referred to as ‘gas board blue’.

This old snicket was at one time known as Fawdington’s Lane, apparently, a name which probably meant something to the people in the area, as the old names usually did.

Not sure about the new names. Here’s one of them, for the road running alongside it, partially constructed in recent years: 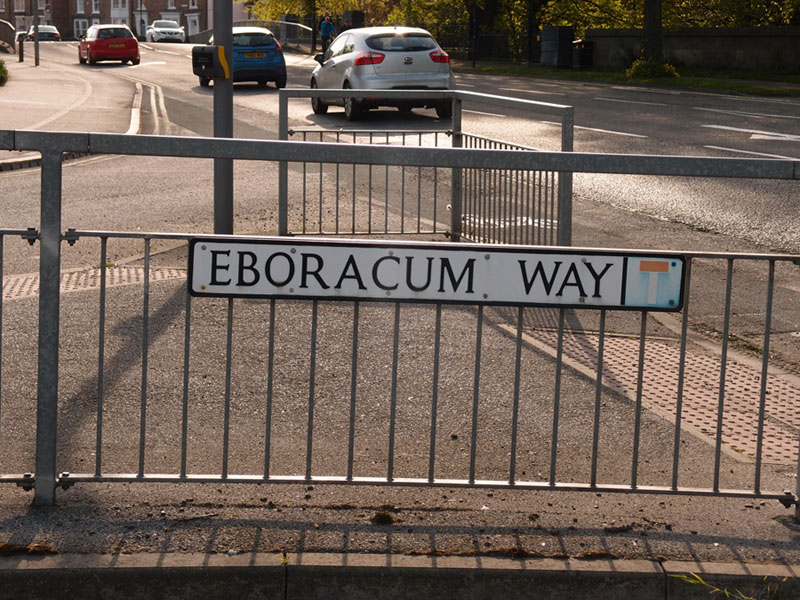 I’m not sure but I guess that the ‘Eboracum’ bit is connected to the naming of the buildings in the new residential development between this road and the Foss, which I mocked rather rudely some years back in a page titled ‘Selling York’. 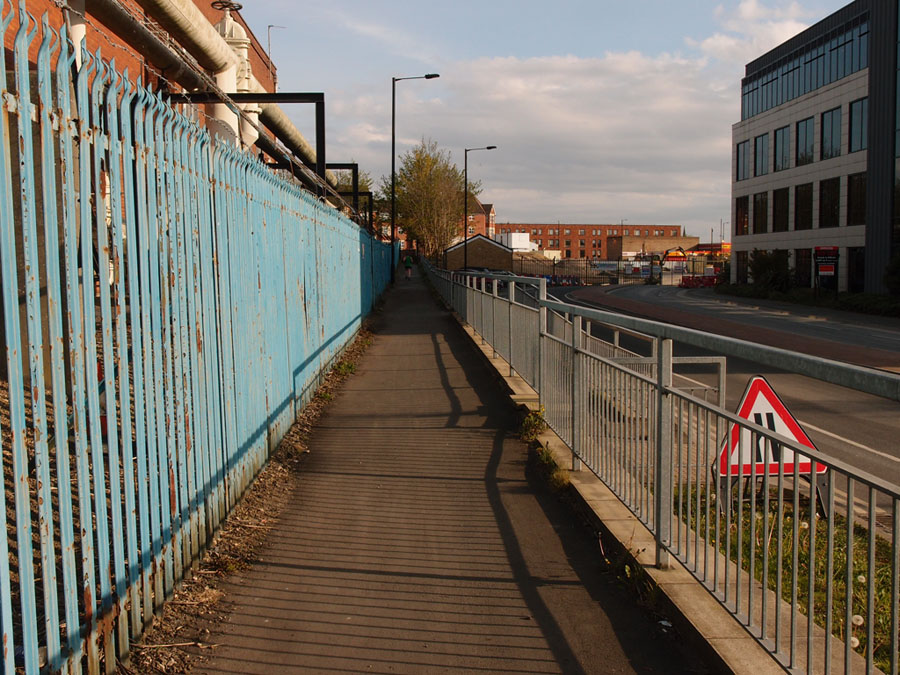 There’s a large office block here, on the part of the old gasworks site redeveloped some years back. It reflects what’s left of the gasworks, and this red brick building in particular, which I’ve been told is the old gasworks social club. 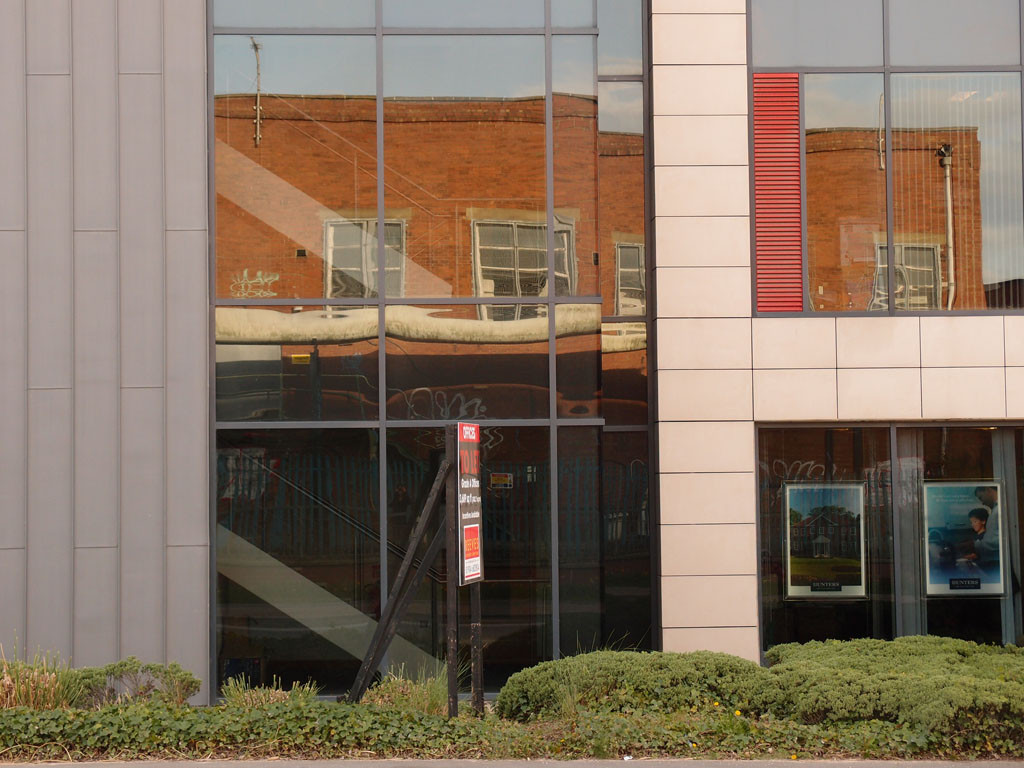 Eboracum Way passes this office block and then ends abruptly — basically a road to nowhere. It has been that way for years.

But in recent weeks the other half of it has been under construction, while for many months before that, as briefly mentioned on a previous page, a building has risen up to one side of this site, near the Foss. It’s a new hotel, a Travelodge, pictured here on the right as we look across towards Layerthorpe. That Foss Islands chimney so prominent on last week’s page is again a landmark on this photo. 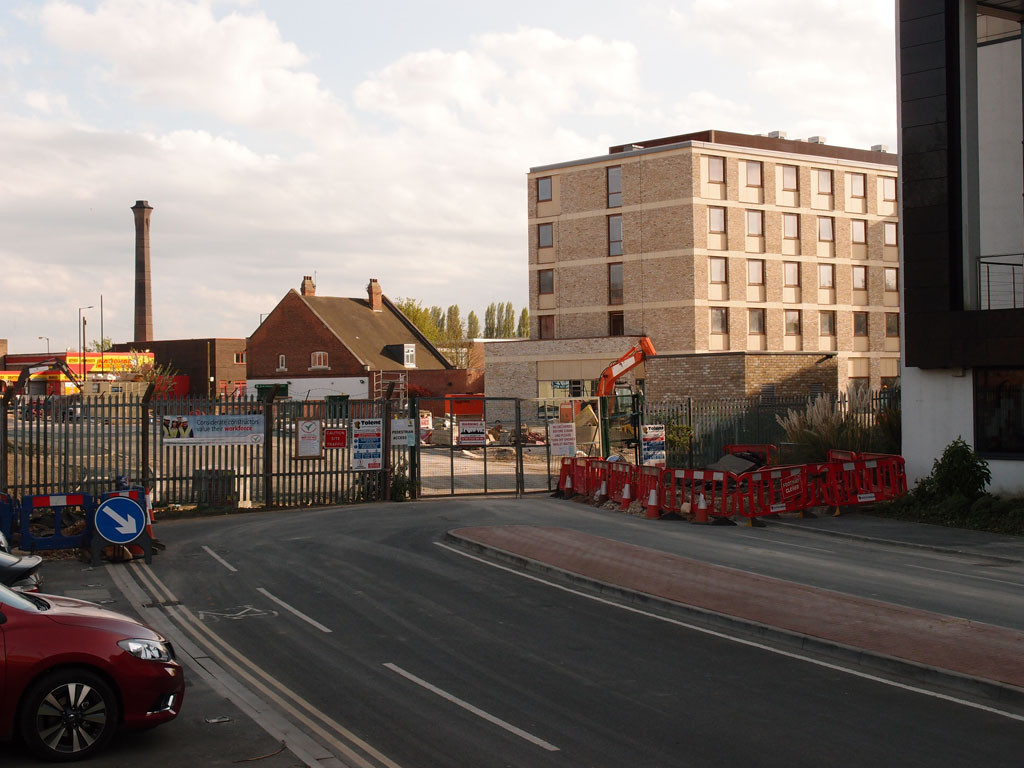 From the photos on these pages of mine you might get the impression that it’s always sunny in York. Not the case, of course, but I’ve always tried to capture my images of this place on bright days. And the same on this walk, the target of which is this rather controversial new hotel building. It seemed even more important in this case to get good sunlight on the thing, to show it to its best advantage, to see if we can find any merit in it, as the comments I’ve seen online suggest most people really aren’t impressed.

And as it was cloudy and dull on my first attempt I went back to try again. Actually I’ve been taking photos of the development for months, but building sites and buildings under scaffolding aren’t enormously interesting to a wide audience, so I thought I’d wait until it was unveiled. And here it is, the new Layerthorpe hotel, captured from various angles. This photo taken through the barriers at the end of the snicket isn’t the greatest quality but it does show an important angle, with the Minster in the background: 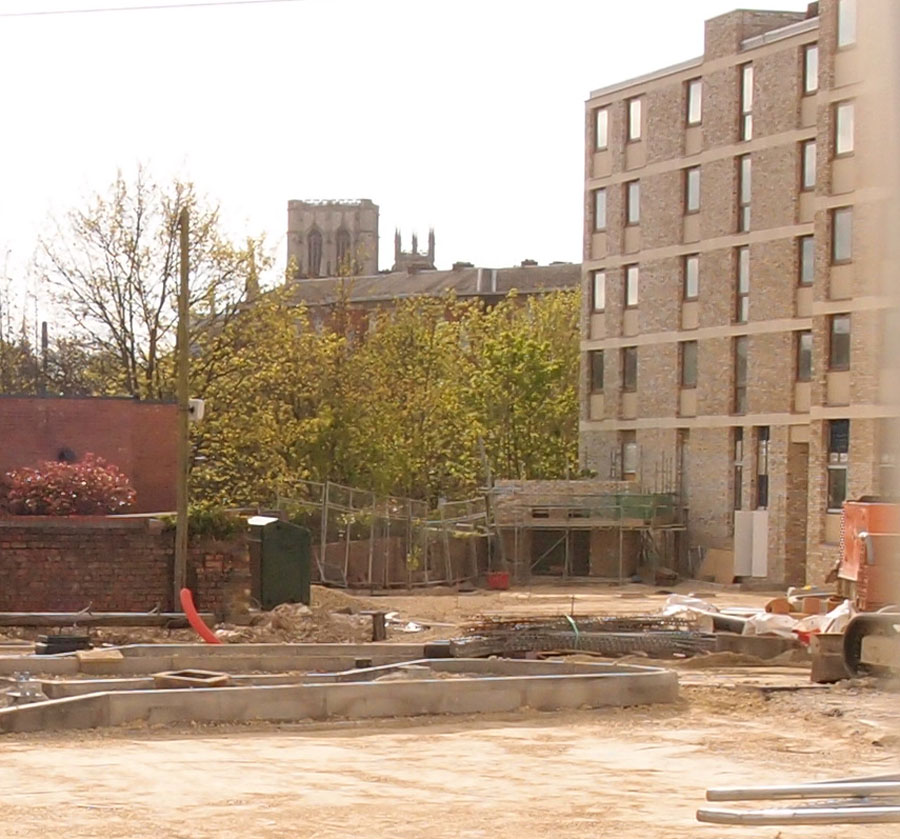 The Minster looks a bit shocked.

It’s huge and dominant, this new building. Perhaps that wasn’t seen to matter in this particular place, as the Layerthorpe area has already been destroyed and rebuilt and its earlier character and history obliterated. (See the Layerthorpe page on this site and my accompanying Layerthorpe project site for more on its recent history.)

Here’s the new hotel from the other side, viewed from Monk Bridge at the start of Heworth Green: 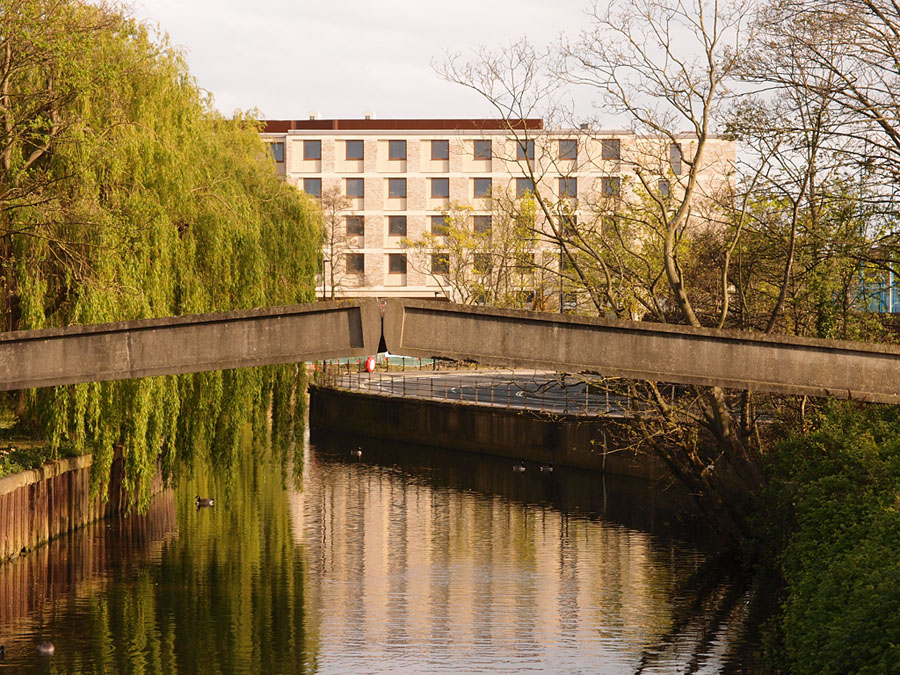 It perhaps looks better when reflected in the Foss. Here we’re following the curve of Foss Bank, back towards town: 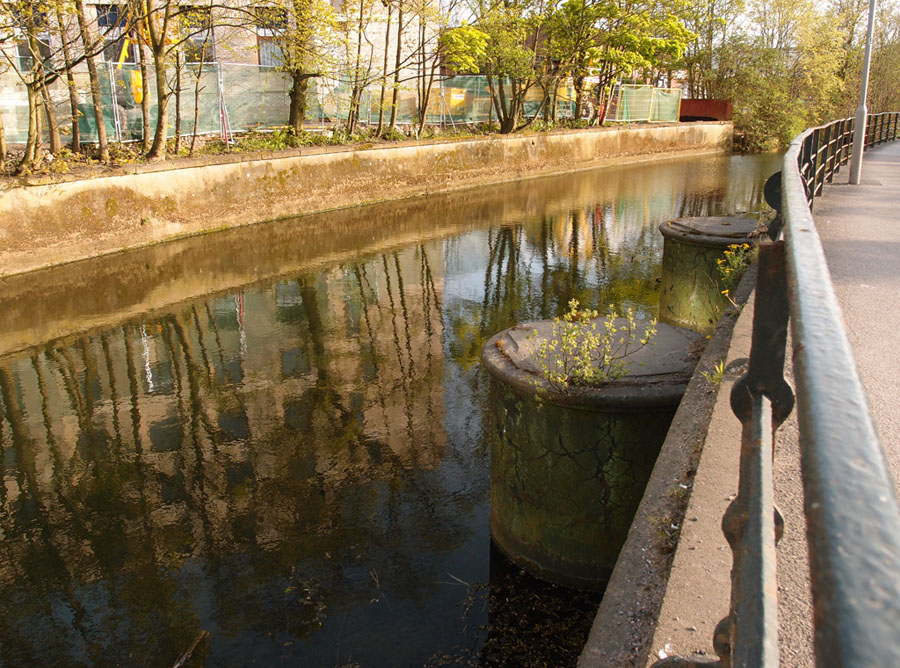 The round iron structures on this side of the river are apparently the old supports for a bridge that once carried a small gasworks railway over the river. As pictured on an earlier page: 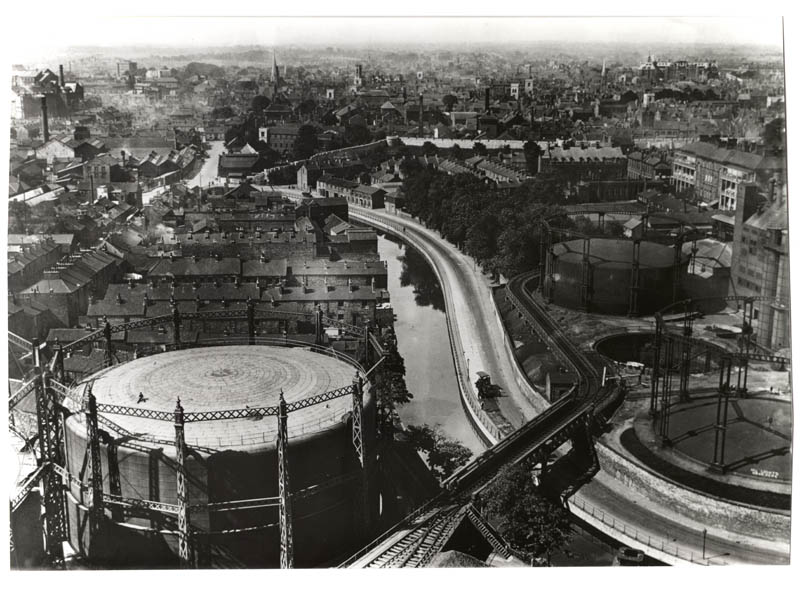 The hotel site is part of what was once a very large gasworks, occupying land on both sides of the Foss. I’ve written a few pages about the gasworks.

When work began on the hotel development it initially involved removing the legacy of that previous use. In spring 2016 fragments of old ironwork were visible through the building site fencing: 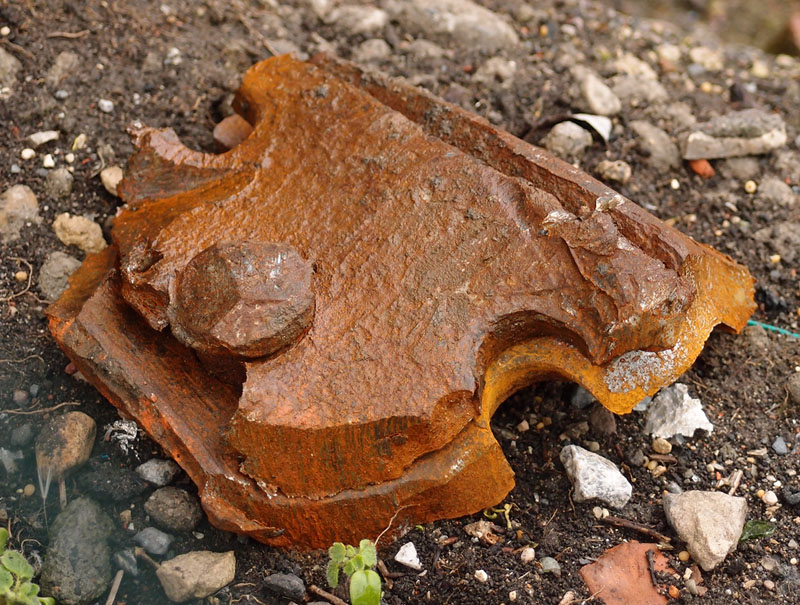 Part of a gasometer perhaps? Or part of the gasworks railway? Rather handsome, isn’t it.

I have several photos of the lumps of rusty iron the site clearance revealed, and may share some more with you, dear readers, at a later date. I bet you can’t wait.

There used to be several gasometers in this area. Now there’s just one, no longer used, sitting on the site on the other side of the snicket we’ve just been down, looking rather flat and low: 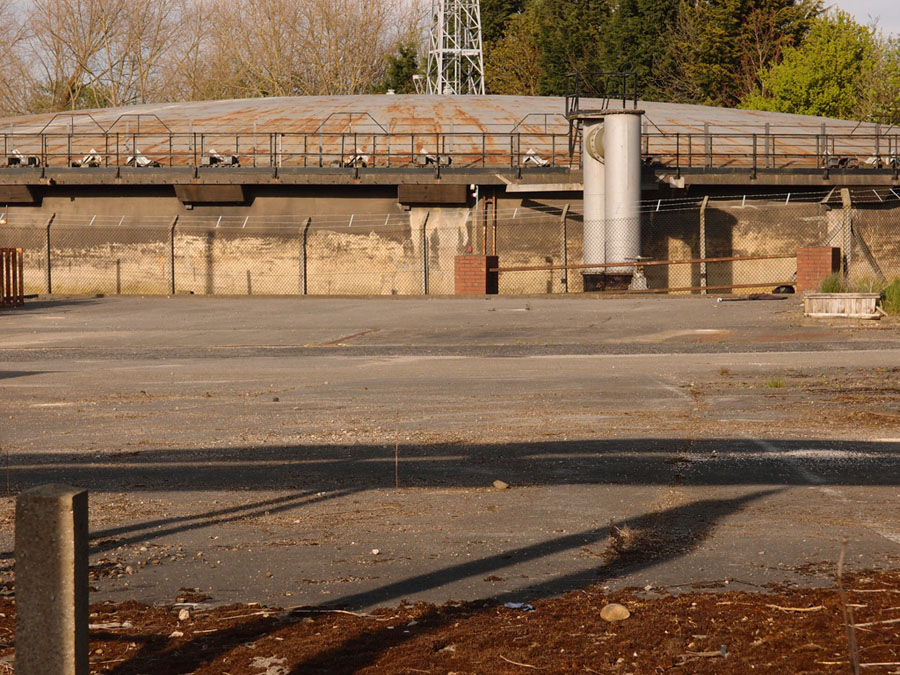 Development of the hotel site was held up by this gasometer, according to the report prepared for the meeting at which the hotel planning application was decided, back in 2014 (PDF on this link).

That same report makes clear how many holdups and setbacks there have been to the redevelopment of the hotel site:

An application was also made in 2004 for 158 residential apartments at the site (with basement parking). The scheme was approved by members, subject to a legal agreement to deliver affordable housing, offsite open space provision, a bond for remediation of contaminated land, a contribution toward a car club and access arrangements to a riverside walkway. The legal agreement was not signed and the application withdrawn as the scheme was not financially viable.

Planning permission was granted for the same type and amount of development in June 2012 (application 11/02210/FULM). It has not been possible to implement the previous permission as the hotel aspect could not go ahead until the gasholder, which is to the northeast, is de-commissioned. This was a requirement from the Health and Safety Executive due to the scale of the hotel and its proximity to the gasholder. The gasholder is yet to be de-commissioned, therefore applicants have come forward with an alternative scheme which moves the building further from the gasholder to the extent that the HSE requirement would no longer apply.

So there it sits now, the new hotel, almost finished, on its site by the Foss where the old gasometers used to be.

Looking at it from further up Foss Bank I was particularly struck by this view of it: 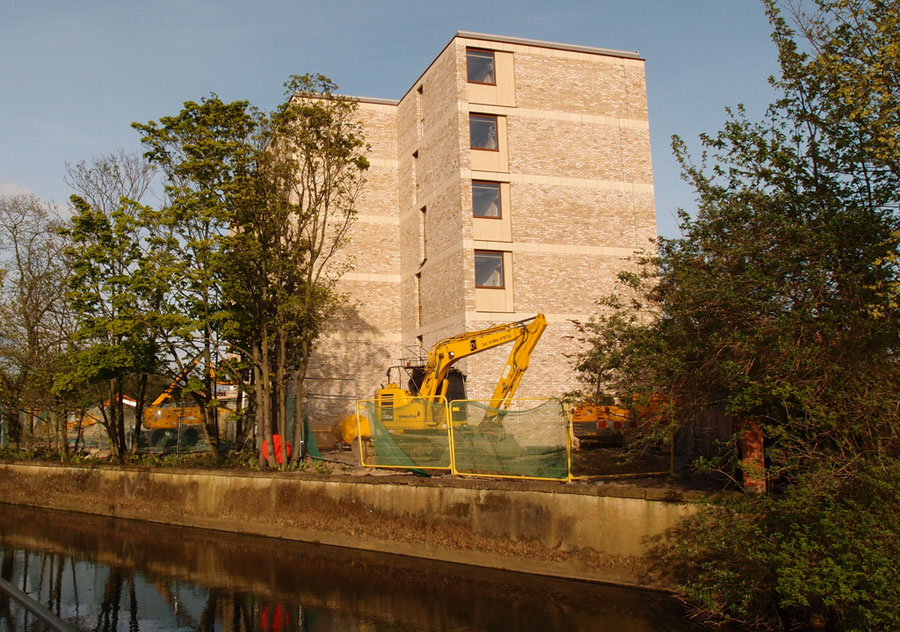 The other sides are full of windows. This side, facing the city centre, has very few, and those that are there look like windows on corridors. Standing here looking at it, then turning round and facing the other way, I could see the Minster. Why was the building designed to face the other way?

It might be, of course, that the Sainsbury’s on Foss Bank and the large former hospital building behind it block out views of the Minster from the new erection, hard to tell from down at street level, but surely something of the city’s handsomeness could be glimpsed from windows facing that way? So why is the whole thing orientated the other way, turning its back on the charms of the city it’s wanting to make a profit from?

Perhaps the most interesting aspect of this development, at least from my point of view, is a new access to the Foss riverside. A riverside walk, following on from a section of riverside that already has benches and a path.

That existing section, however, is gated with a security lock and a ‘private property’ sign: 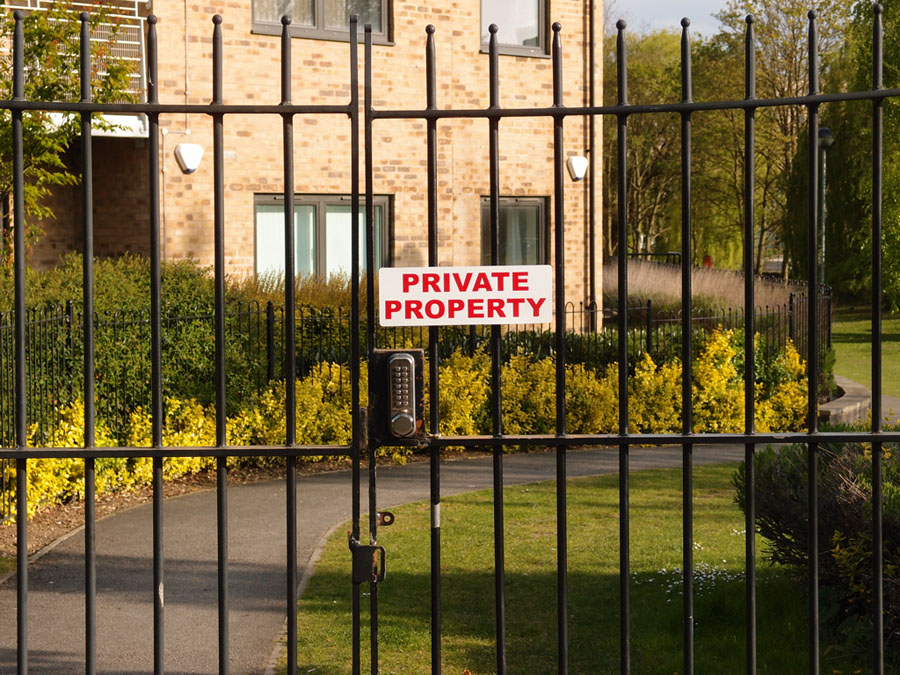 So I’m not sure how and when it’s going to be opened up to the public.

On the site boundary on the old snicket of Fawdington Lane there’s a noticeboard with information about the building work, a site notice for a licensing application, and this invitation: 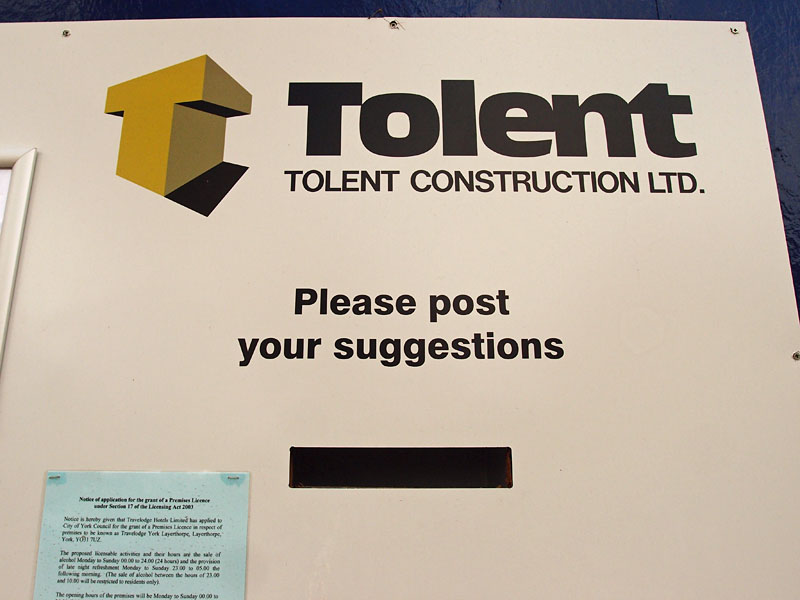 Not sure what kind of suggestions they’re hoping for, and it would be interesting to know if they’ve had any.

Meanwhile, your views on this new addition to the skyline are welcome here via the comments form below. 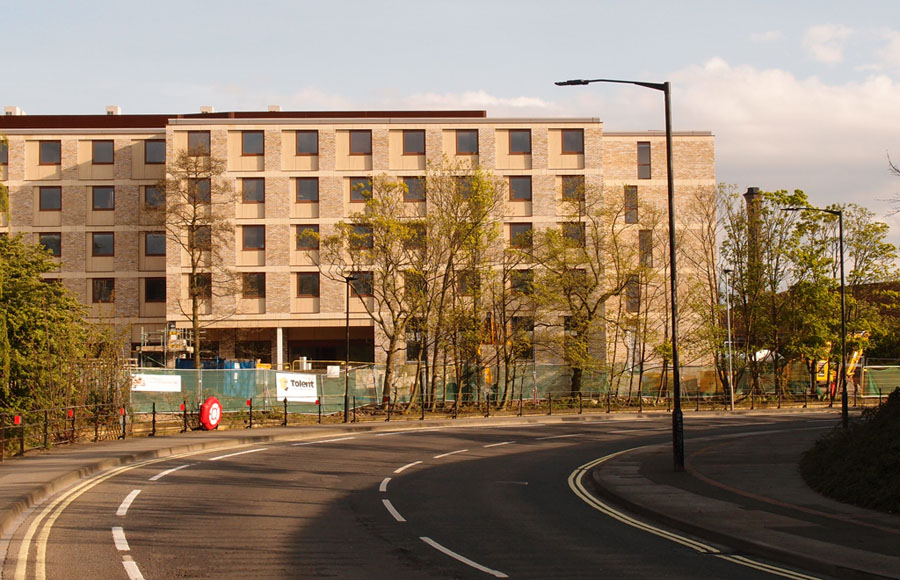 Following a request from a reader I’ve marked the location of this week’s wander on a Google map: see this link.

Footnote: then and now

I’ve been writing about York, and taking photos of York, and freely sharing it all online for many years now. Some of those earlier pages I’ve linked to above — for example this one from 2007 — have really small photos, because that was appropriate in those ancient days when most of us didn’t have broadband. That’s how long I’ve been doing this.

As I now have my own archive going back more than a decade, and as I now have more of an understanding of how it all works, these plans and changes, it seems a good idea to keep producing these pages. On the other hand it’s working for free, and that can sometimes be hard to justify. So if you’d like to express your appreciation and power more pages, here’s a way to do that, with my groovy new ‘buy me a coffee’ button. Thanks to the supporters who powered this week’s page.

Lisa @YorkStories is the creator, administrator, and writer of content on www.yorkstories.co.uk. She can be contacted on this link or via Twitter, @YorkStories
View all posts by Lisa @YorkStories →
Tagged  gasworks, hotels, redevelopment
To link to this page's proper location please use the > permalink