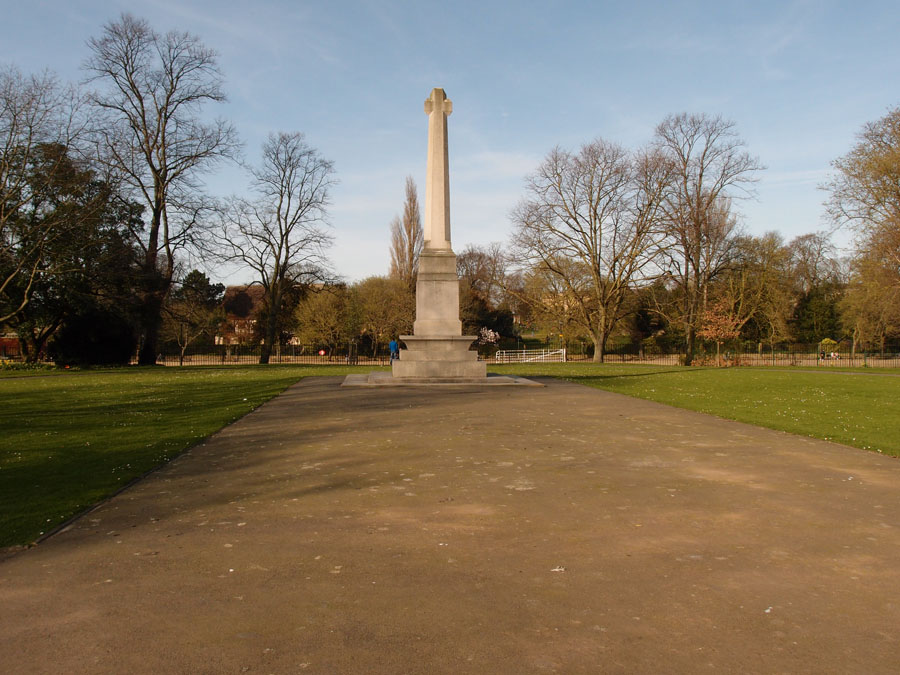 At the weekend I had a wander in spring sunshine, beginning at the Memorial Gardens. At first glance it looks much as it did before, but I called by here as I’d read that some of the flowerbeds had been turfed over. Not perhaps that interesting in itself, but the information came from the impressively-titled ‘Update on Implementation of Recommendations from Previously Completed Goose Management Scrutiny Review’ (item 6 at this recent meeting).

Back in summer 2015 I wrote about the tatty and apparently untended ‘display’ here in this park, which seemed like a waste of money and resources. I wondered if it might be more sensible to turf over the flowerbeds instead. Nice to see that this has occurred. There’s nothing wrong with the large area of grass, it seems appropriate to me, as it’s a memorial garden for quiet reflection, and the monument in the centre is the focus of that attention.

Apparently evergreen shrubs may be planted this spring. I hope they’re planting them round the edges somewhere and not going to waste yet more of the city’s money and resources by taking up the turf recently laid.

Private businesses in the city like the nearby hotel by the station provide fabulous floral displays, so perhaps the council would be better leaving such things up to them. The council seems to be withdrawing from provision of many far more important things, so council tax payers might question investment in flowers.

The demise of the dahlias here in the gardens seems to have been blamed on the geese. The goose management strategy mentioned above referred to a couple of measures put in place here, including the installation of a gate, and also notes ‘all bedding removed’. Not, as it first seemed, a reference to goose roosts, but to the bedding plants put in the flowerbeds.

Gate or no gate, bedding or no bedding, the geese don’t care. Look at these two, happily chomping away on the new grass. The outline of the old flowerbeds is visible in the turf and its more vivid shade of green. 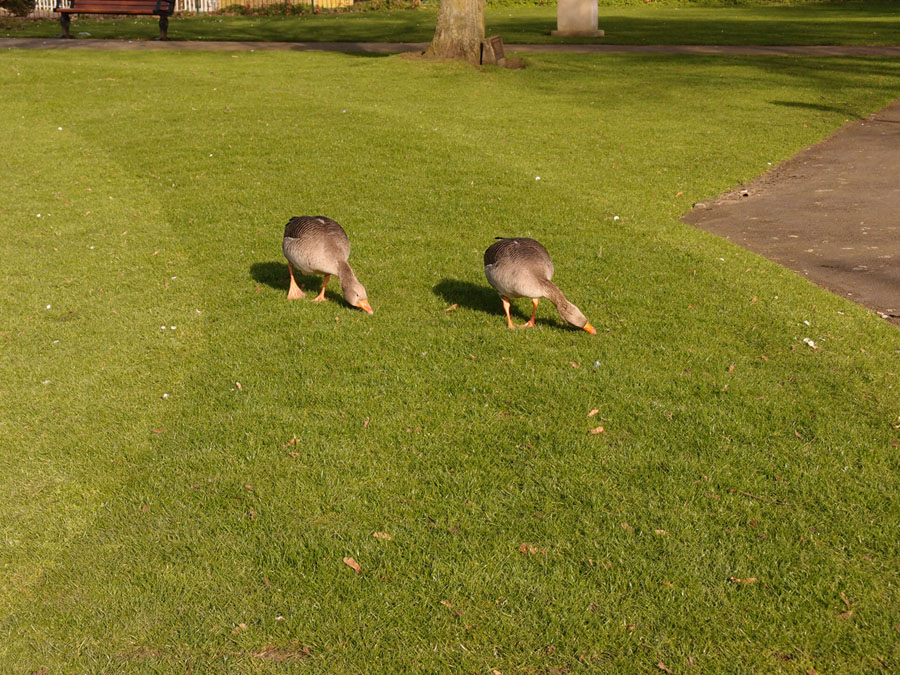 Personally I like seeing the geese, and I know I’m not alone in that. We may return to the issue of goose management another time. For now, a read of this PDF is recommended, for an insight into the time and money that has been/could be spent on trying to control geese numbers. And here’s something I wrote when first hearing of the goose scrutinising.

Let’s fly over to the nearby Tanner’s Moat, just over the other side of the bar walls. At the bottom there’s Wellington Row, and this rather fine building: 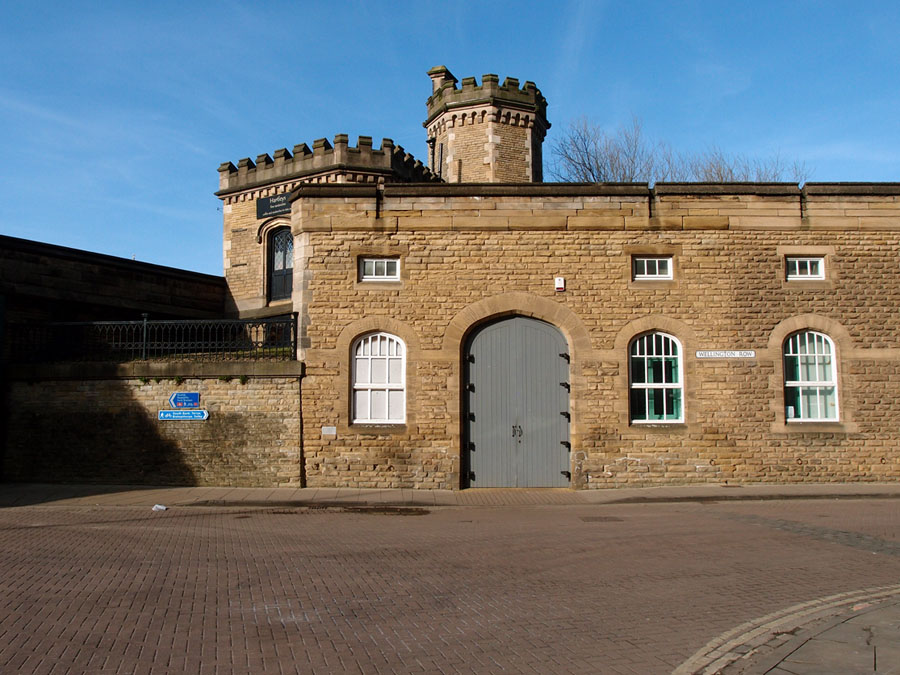 It was built as an electricity sub-station, but you wouldn’t know it. It’s listed. It was most recently used as the ‘Hub Station’, a base for the Bike Rescue Project. I wrote about it some years back. That project closed, sadly. There’s now a planning application submitted by the Environment Agency to use it as a public drop-in centre/exhibition space for information on flood defences in York:

This wouldn’t alter the exterior and seems to involve little change to the interior. It would be good to see the place back in use, and again accessible to the public.

Just along from that we come to North Street Gardens, where a memorial to John Snow has recently been completed. I wrote about the planning application for the memorial in November 2016. 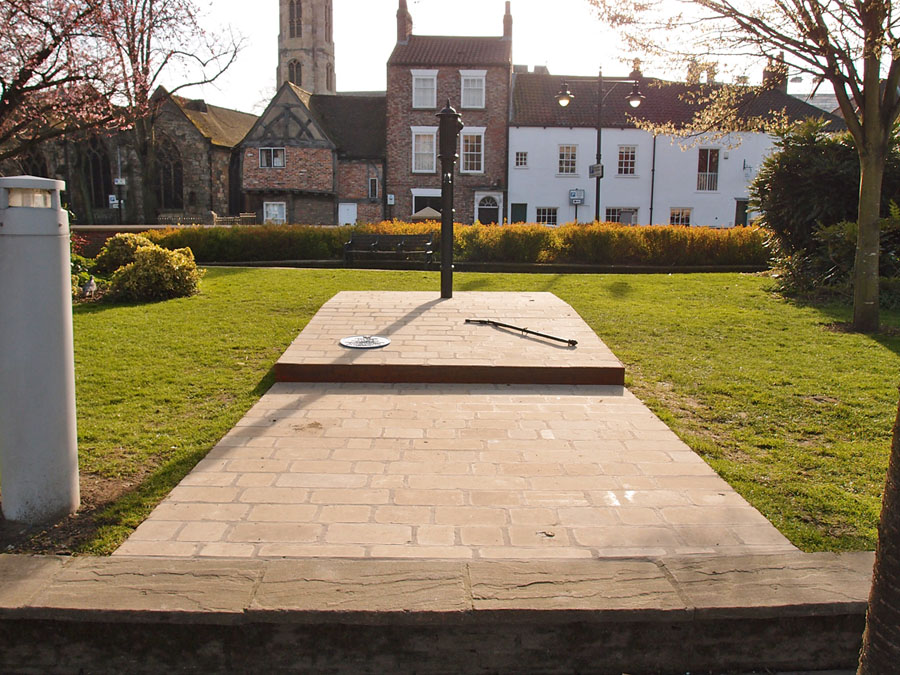 Though the stone base for the pump has covered some of the grass in this area most of it remains, and seemed to be appreciated by a blackbird pecking for worms.

From here, let’s run off up to Micklegate. I haven’t been for a while, but I read recently that the ‘gentrification’ effect is becoming more noticeable. In May 2016 I wrote about the old ‘Micklegate Run’ and the changes here. Time for a quick revisit. 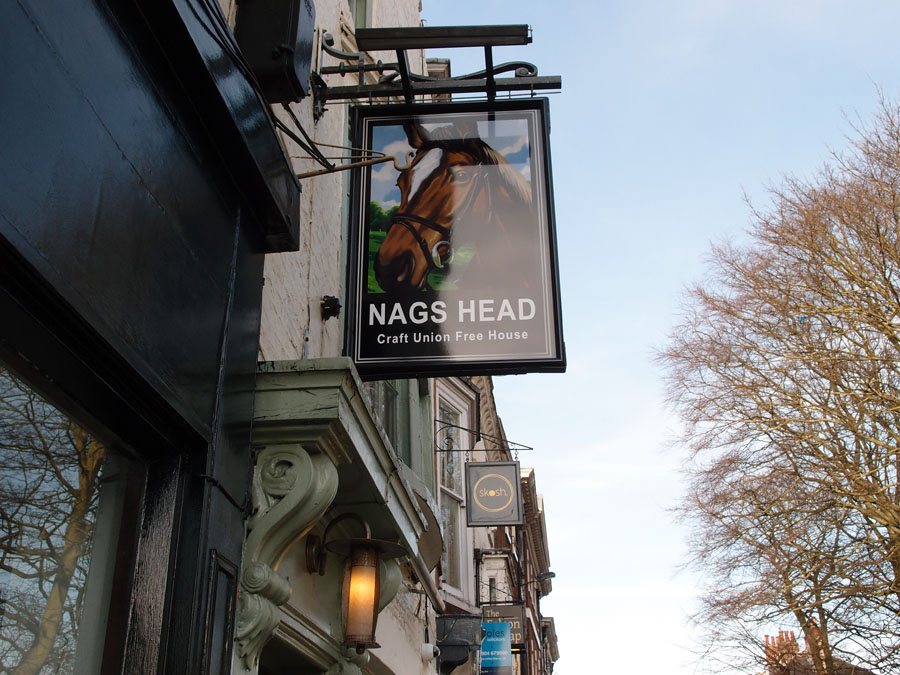 Much of it looked much the same as last time I was up this way, but then I saw this handsome frontage: 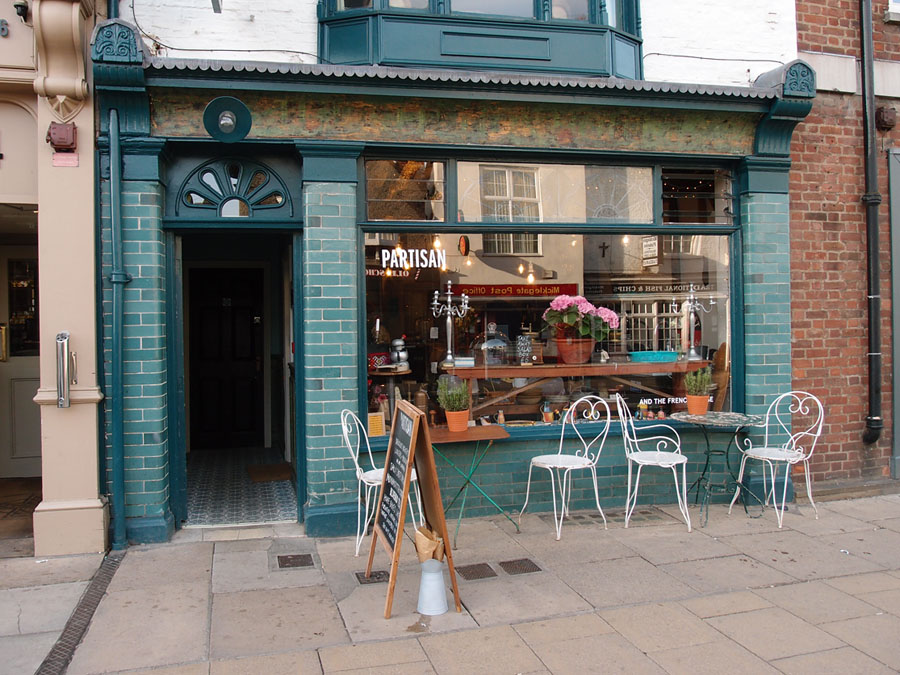 — and wondered why I’d never noticed it before. That beautiful bluey-green glazed brick, isn’t it splendid?

It must have been covered up before, I deduced. And it seems that was the case. Google Street View helpfully confirmed my suspicion. The bricks were painted before, and this image captures their uncovering: 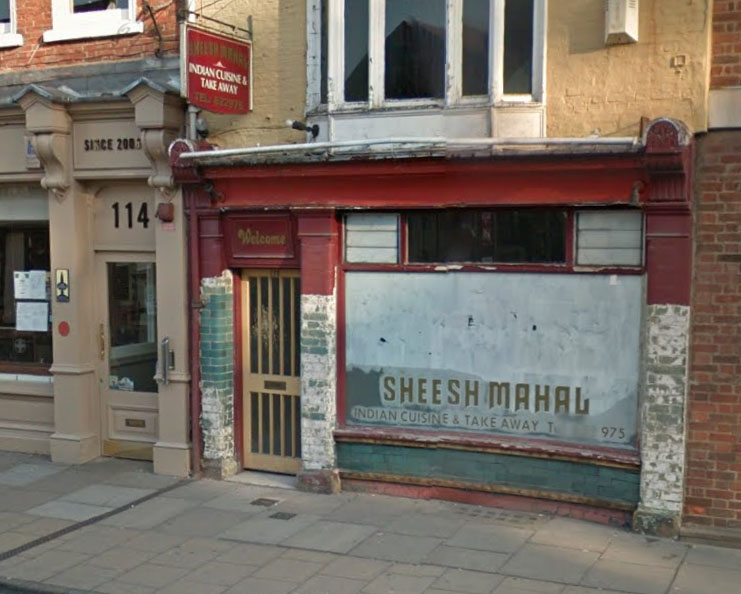 Quite an improvement there then. And even a bit of a ‘ghost sign’ there, in the woodwork above the window, on the Partisan frontage pictured above. (More on ghost signs on this link.)

A bit further up the street, another place that has opened since I was up here last: 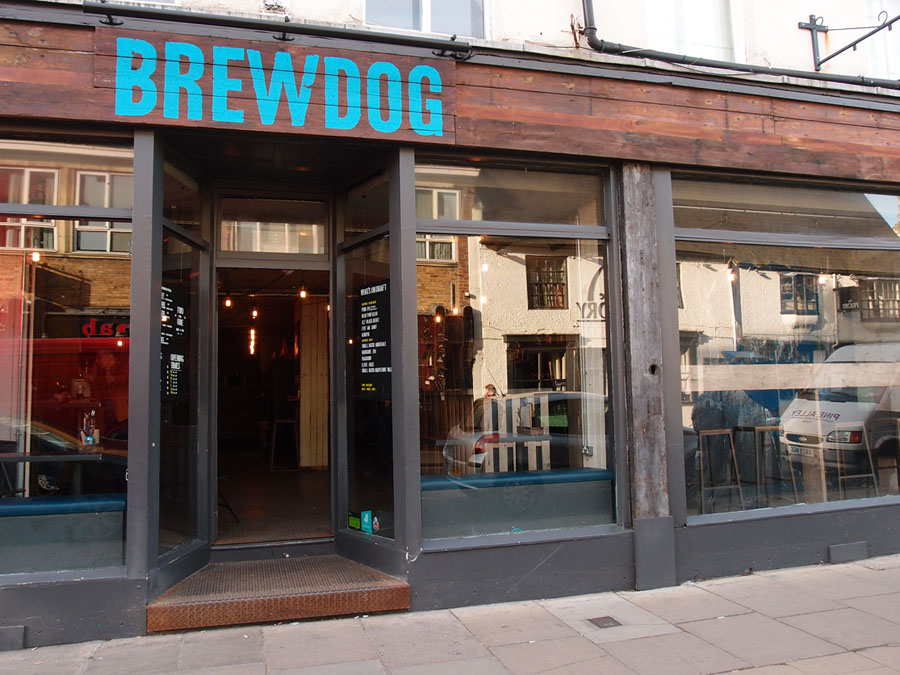 I wrote about the licensing application sign in its then empty windows last year. It’s clearly now open, though its frontage looks a bit unfinished. We were trying to work out if it’s supposed to look like that. Maybe aiming for a punk kind of look, or something.

Quite a contrast to Partisan. But then Micklegate always has been a street of interesting contrasts, and I’m glad it still is.

At the top, of course, we reach Micklegate Bar and the walls. I was aiming for a particular building on nearby Toft Green. The wall walk angle on it seemed particularly alluring on this sunny afternoon, so up the steps we go to meet the treetops — well, the tree sides — and the buds about to open: 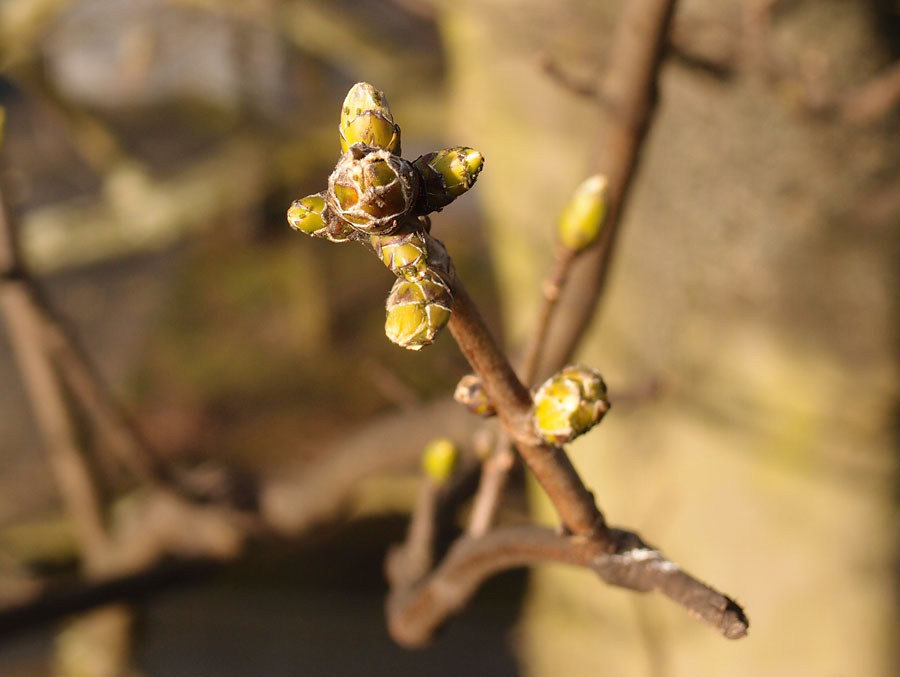 About to open its buds: tree by the bar walls

I was intending to write about a new planning application for Hudson House for this week’s page, but got distracted by all these other things on the way. So instead I’ll leave you with the delightfully distracting daffs I looked down on from the walls by the station. Happy springtime everyone. 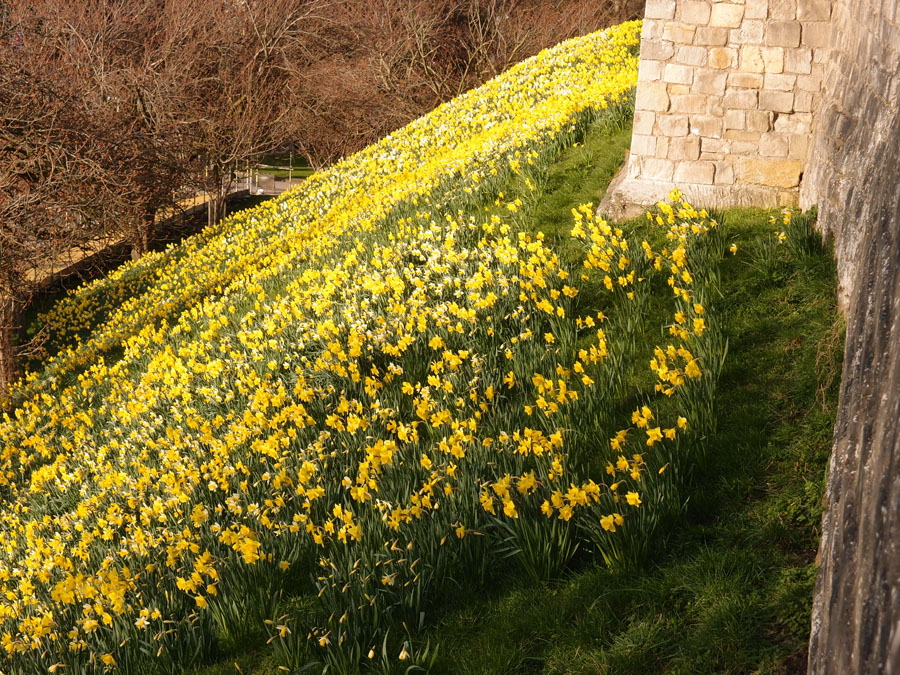 Daffodils in bloom on the walls by the station