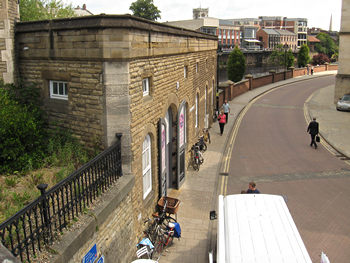 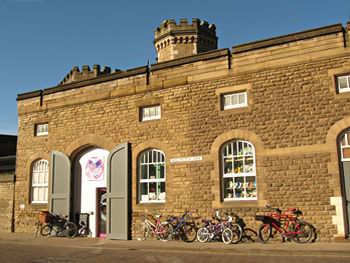 An exciting arrival in the Wellington Row/Tanners Moat area is The Hub Station – in an old electricity sub station – hence the (rather witty) name. This is the new home of the Bike Rescue Project, previously based in Terry Avenue – where I bought my own trusty steed – ‘Old Bikey’. It’s really good to see that they’ve been able to complete their planned move this year. Also good to see the imaginative reuse of the Grade II Listed electricity sub station.

This new building, alongside Lendal Bridge, offers secure cycle parking, and this provides a rather satisfying link to another building very close by, also recently remodelled, which provided a similar service for an earlier form of transport. 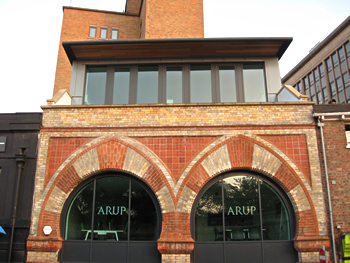 Just along the short stretch of road known as Tanners Moat, I’m loving this remodelling of the remains of the old ‘horse repository’ – once a rather comical example of Victorian architectural exuberance, once a tall and towering thing.

The original entrance has been kept, with its polychromatic brickwork and those pleasing arches. And somehow the refurbishment has made a building which once looked a bit ridiculous look supremely cool and confident.

I think it’s now called Lendal Arches. I still call it the horse repository, though the days when it served as such were well before I was born. It’s just nice to have an opportunity to say the phrase ‘horse repository’. 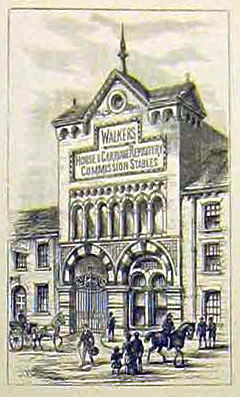 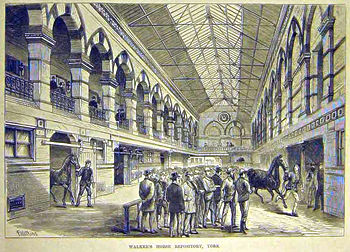 The original building dates from the 1880s, and those arches were once topped by a large and rather flamboyant structure, as shown in this 1884 illustration. Apparently the horses stabled here were led up ramps to their quarters. Most major towns and cities had a horse repository, where horses were sold by auction, and where visitors to the city could leave their horses and carriages.

The original building stretched back a fair distance (presumably as far as the modern office block which joins the back of it now), as shown in the other illustration, looking towards the inside of those impressive arches. The owners of the horse repository also had use of a nearby field just outside the city walls – where the memorial gardens are now – where they exercised the horses.

It’s rather nice that so close to a new place offering secure cycle parking and cycles for sale we’ve retained part of the old place which offered similar services for an earlier form of transport. 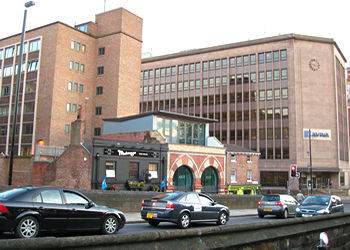 This building which once dwarfed its neighbours is now dwarfed by them. The Hutchinson and Palliser guide to York refers to the ‘vital ugliness’ of the original building: ‘it was suggested that it was the ugliest building in Europe but there was then less competition.’ Indeed. In the photo of the arches above you might have noticed a gloomy thing looming over its shoulder, here shown more clearly. The authors refer to the building’s ‘horrid successor looming in Rougier Street’. Everything is looming and gloomy in Rougier Street, but I wandered up there and did my best …

To Rougier Street and its charms …

Images of the 19th century building are from The Illustrated Sporting and Dramatic News, June 1884

www.imagineyork.co.uk has several photographs of the building before its height and bulk were reduced – including this view, and this view, both from the 1950s (© City of York Council)