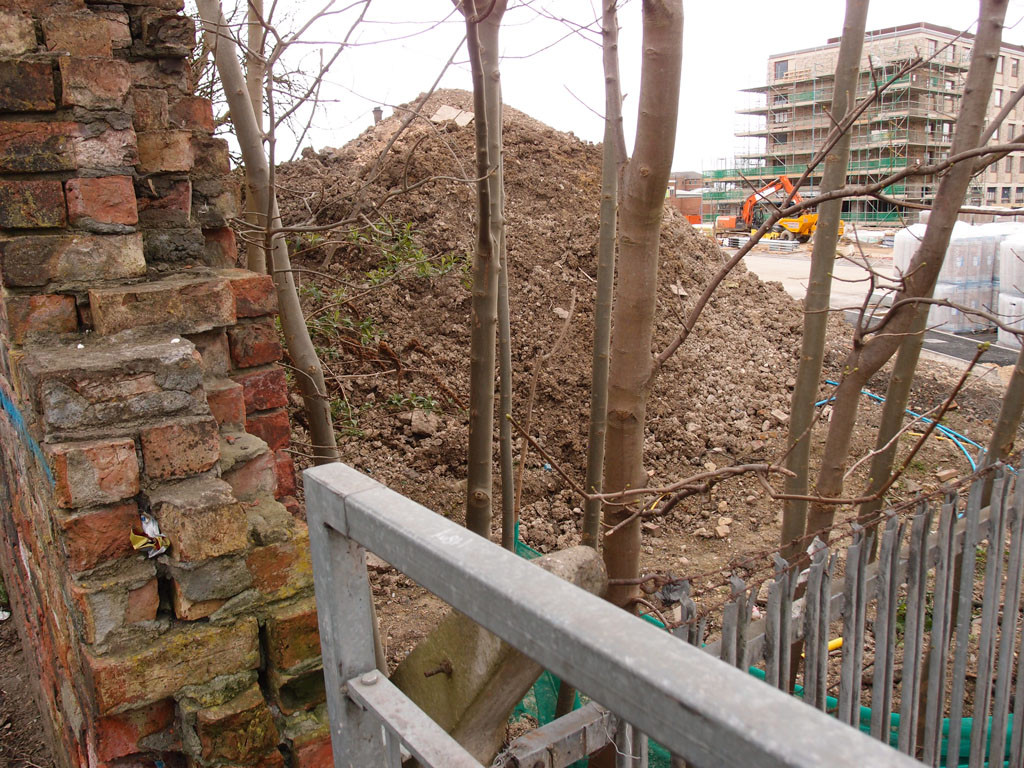 Let’s go for a little walk … starting by the gasworks wall. A fragment of it remaining, on the snicket between Heworth Green and Layerthorpe, next to a building site.

There’s a hotel being built here. At the end of the snicket, turning right towards town, we meet the junction at the end of Hallfield Road. Looking back to where another section of gasworks wall used to be until quite recently, where a new road is coming through. The new hotel is on the left of this photo. 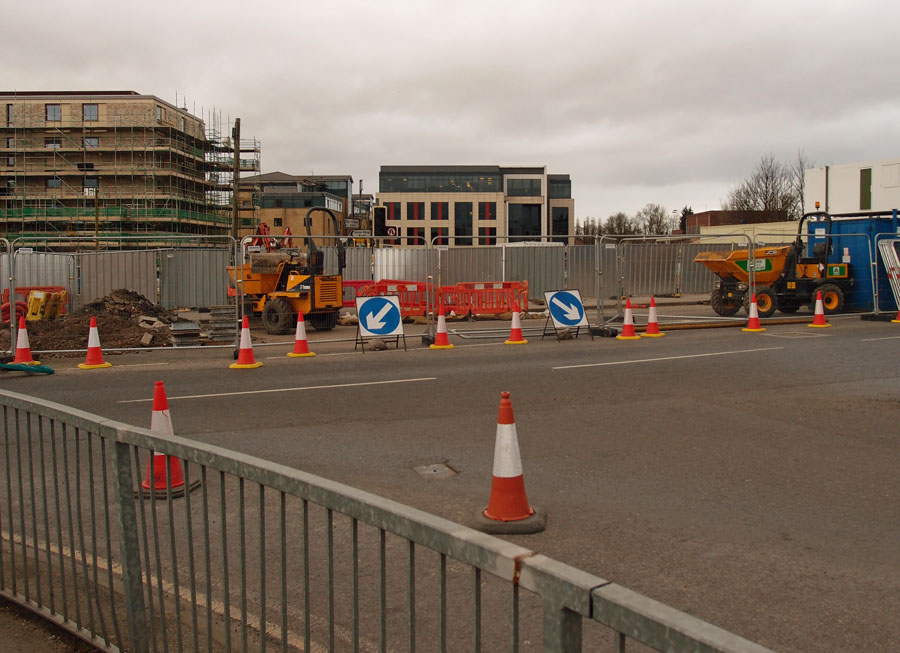 More on that story later perhaps.

Continuing on towards the city centre, in a straight line up Layerthorpe and then onto Peasholme Green, we arrive at the Black Swan, a well-known historic pub. Here it is pictured in May 2014. 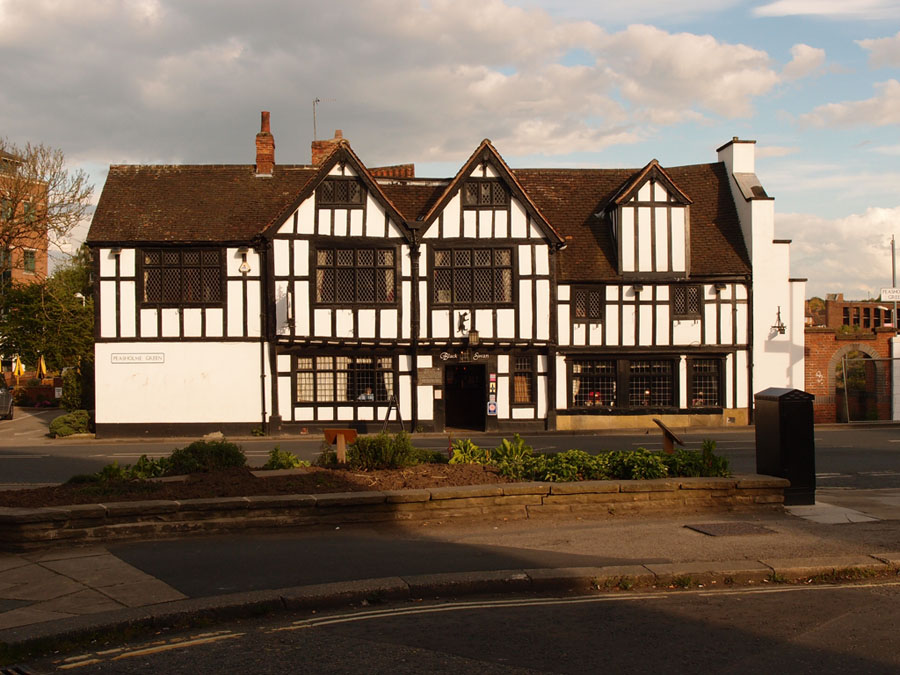 Since the photo above was taken the Black Swan has had the Hiscox building overshadow it on the right, but the curved glass of that building reflects it, in what is generally seen as an impressive addition to the cityscape.

The view shown above would be drastically altered by a large hotel building planned for the site behind it. This planning application will be decided at a planning committee meeting this week — Thursday 23 March. Further details and documents for the application are on this link:

York Civic Trust have objected, referring to the planned hotel as ‘uninspiring in design and consequently detrimental to both adjacent properties of historic and aesthetic merit’. Historic England state that ‘we are somewhat disappointed with the architectural massing and appearance of the scheme’. Many individuals have also objected.

Nevertheless the report prepared for the meeting (on this link, PDF) recommends approval, as these reports so often do.

Developers often have to make some kind of contribution to the local townscape/community, in the form of a section 106, as is the case here. The report suggests that the developer could contribute £18,000 to street improvement works on the opposite side of the road. Seems a very small contribution from such a large profit-making development?

Apparently it would be a ‘Moxy’ hotel. I’ve struggled with this brand name ever since first reading it. I can only think of the word ‘poxy’, and the ‘m’ makes me think of words like maudlin and morose. Maybe that’s just me. But anyway, I’ve just been reading about these ‘Moxy’ hotels. Apparently, according to the official info, a Moxy hotel ‘comes at a cost to build that is very easy to digest’. The link also leads to a PDF referring to ‘a robust demand generation engine that drives top-line revenue while maximizing bottom-line savings’.

So if they’re not too expensive to build and the staff aren’t going to get paid a lot perhaps a bit more could be reinvested in the streetscape then, so we can admire the paving rather than having to look at the hotel? Or perhaps elected officials could refuse to grant permission and wait for something that doesn’t just feel like yet another investment opportunity being plonked into our streets.

It’s important to note that York is a hotel ‘hotspot’, placed second in this year’s UK Hotels Market Index. We’re almost top of the league when it comes to being a desirable location for investors to acquire an existing hotel or develop a new one.

Doesn’t fill me with joy, I have to say. Does it you?

As usual the meeting to discuss this and other applications will be webcast live and also available to view later too if you miss it. The agenda for the meeting and further info is on this link.

We continue on from Peasholme Green, along Stonebow and Pavement, turning left into Piccadilly. We were here a couple of weeks back, and we’re back again as it’s all happening on Piccadilly. The plans for 46-50 Piccadilly — next to Ryedale House — are now online and open for viewing and comment. 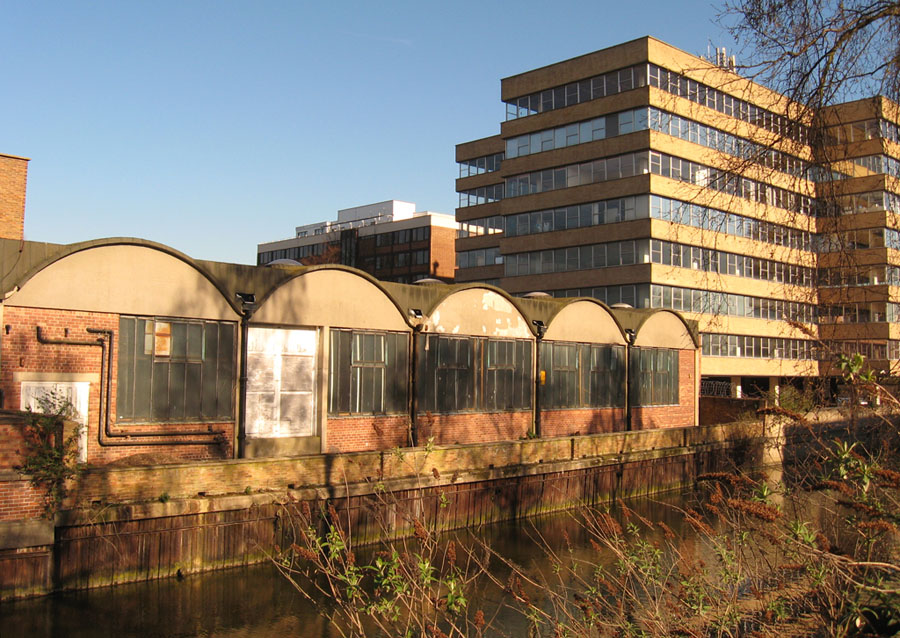 The Press reported recently that Northminster, who own the site, might withdraw their plans because of the Spark:York planning application for the site over the road.

Interesting on so many levels. The comments under the Press article cover many of the thoughts many of us may be having about the various perspectives on and interpretations of this situation, so I don’t think I need to go into them here.

The main thing, perhaps, is the bridge access the Northminster plans offer. The hotel plan includes space on one side for access to a pedestrian bridge across the Foss, or as the Design and Access statement puts it: ‘Boundary treatment is pulled inboard of the site boundary on the south-east edge of the site to facilitate access to any potential pedestrian bridge planned as part of the Castle Gateway proposals by CYC.’ The bridge has been part of the wider plans for the area for many years. It’s included in the council’s Castle Gateway plans I wrote about earlier.

The Castle Gateway plans depend on various parties working together. Not looking that good so far is it, with Northminster already wanting to control what happens on other sites nearby that they don’t own.

More on this story later perhaps, when we know a date for the Spark:York application going to the planning committee for consideration.

Let’s head back up Piccadilly, and get some motorised transport perhaps, as we’re heading for the suburbs — to the mean streets of Clifton …

Heron Foods used to occupy a retail unit in the centre of town, on Stonebow, but it had to close for the gentrification of Stonebow House. At least one person missed it enough to write a letter to the Press.

Guess where it’s relocated to? To my patch, the Clifton area. To that building I wrote about a few times: the former Corner House pub. 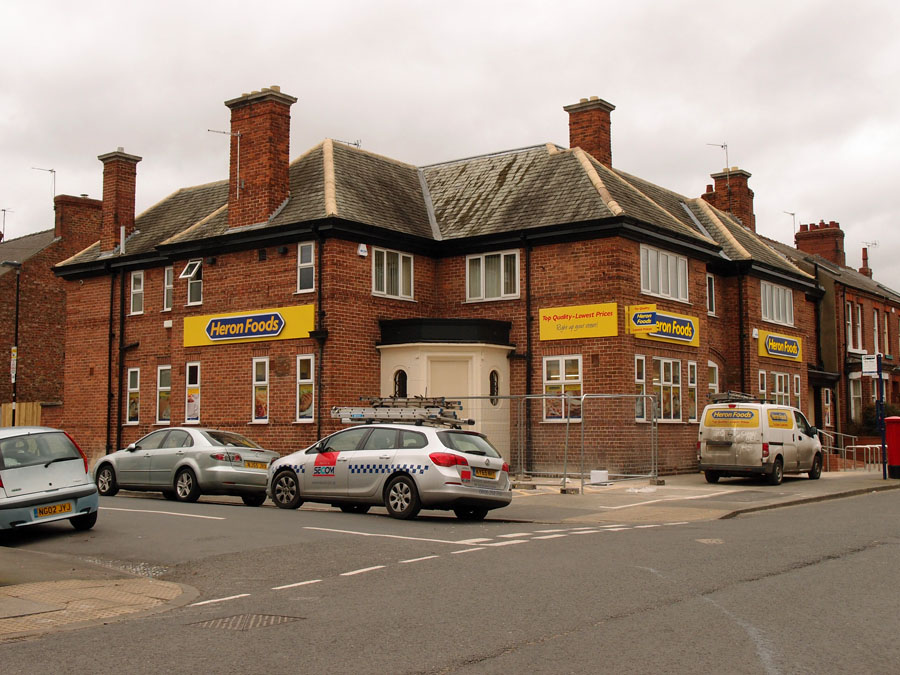 The shop opened this week, on 20 March. The signage is a bit garish, but at least this reuses a building rather than flattening it, which is what should always happen, wherever possible, (and should be possible with that other building I wrote about recently). We can still see that it was built as a pub, even if it isn’t one anymore, and it links us back to the history of this residential area.

A quick walk up the street and round the corner takes us to Bootham Crescent, the home of York City FC. Which takes us to the last ‘H’ of this week’s title …

On Saturday a line of coaches full of York City supporters set off from the Bootham Crescent ground. Many of us who didn’t travel to Lincoln listened attentively to the game on all the various devices the 21st century offers us. Some of us managed to listen to it on an old AM/FM radio out in the garden by wrapping an piece of wire we found in the shed round the stump of a snapped-off aerial, to get the FM frequency. Or maybe that was just me.

So, the club is celebrating getting to Wembley again, for the FA Trophy final. Hurrah. That will be in May. For now, in March, a reminder of another happy time in the history of York City FC, from another March, 62 years ago: 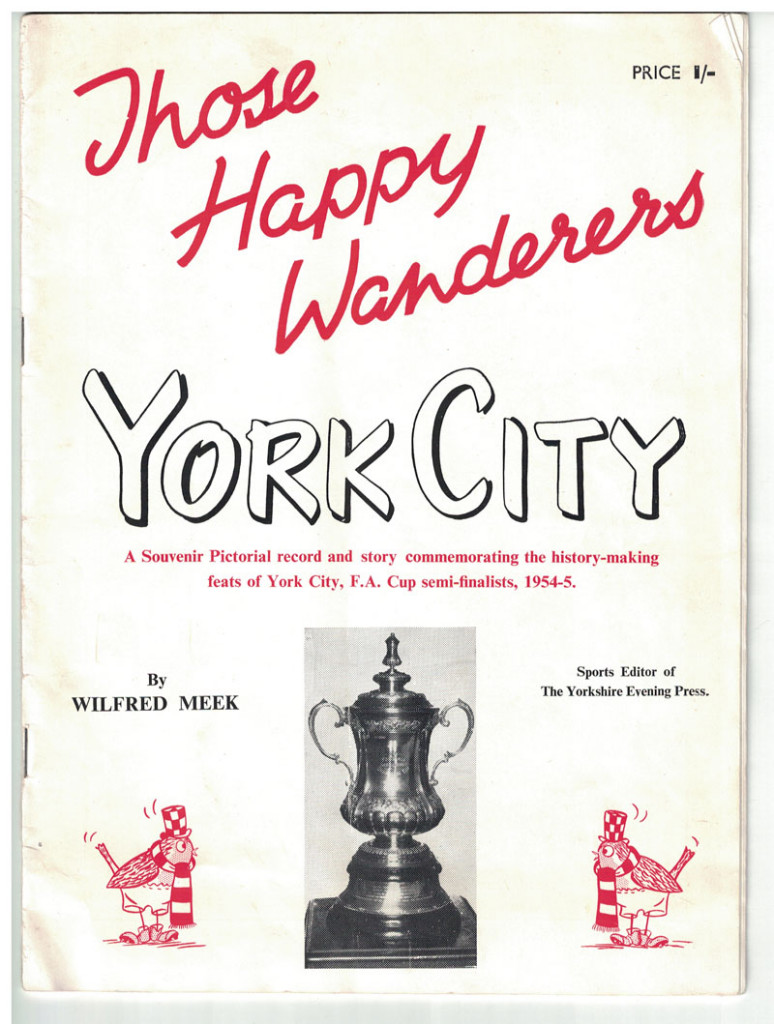 It’s the other half of a pair of programmes that had managed to survive intact in a cardboard box under a leaky roof. It belonged to George, who is on the right of the photo of the ‘Gasworks Gang’, on this page from some years back. This ‘souvenir pictorial record and story’, as the cover puts it, seems to have been produced for that game they were going to on 26 March 1955. Note the illustrations of birds dressed as footballers/supporters on the front cover. They’re robins, for reasons explained here. 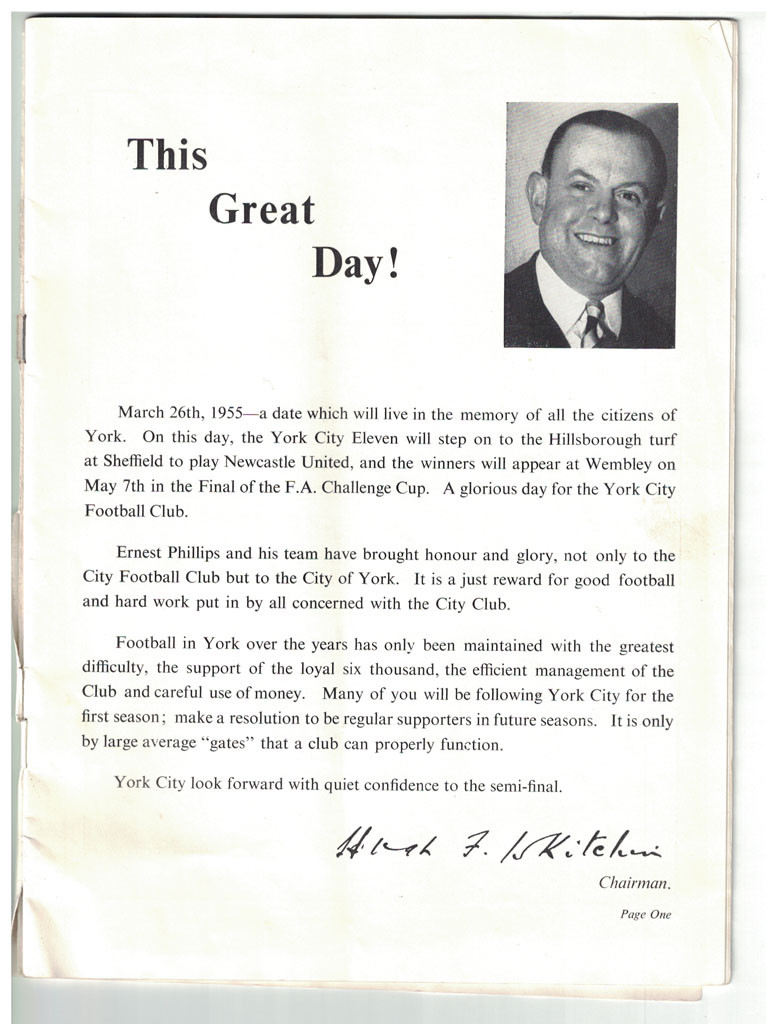 And the Happy Wanderers thing? I wondered too. It’s from a song, popular at that time. I think this might be the one.

I found a couple of other songs coming to mind as I started this page, which I thought I’d share in case anyone’s feeling a bit jaded and in need of relaxation or jolliness after all that reading. That fragment of gasworks wall where we started always brings to mind the first line of this rather poignant tune, and the page started with the first line of this 1970s delight. Watch Showaddywaddy in the 70s and try to forget about how much of York is being bought up and overdeveloped to service the requirements of outside investors?

Well, it looks like that to me. Quite happy to be wrong.