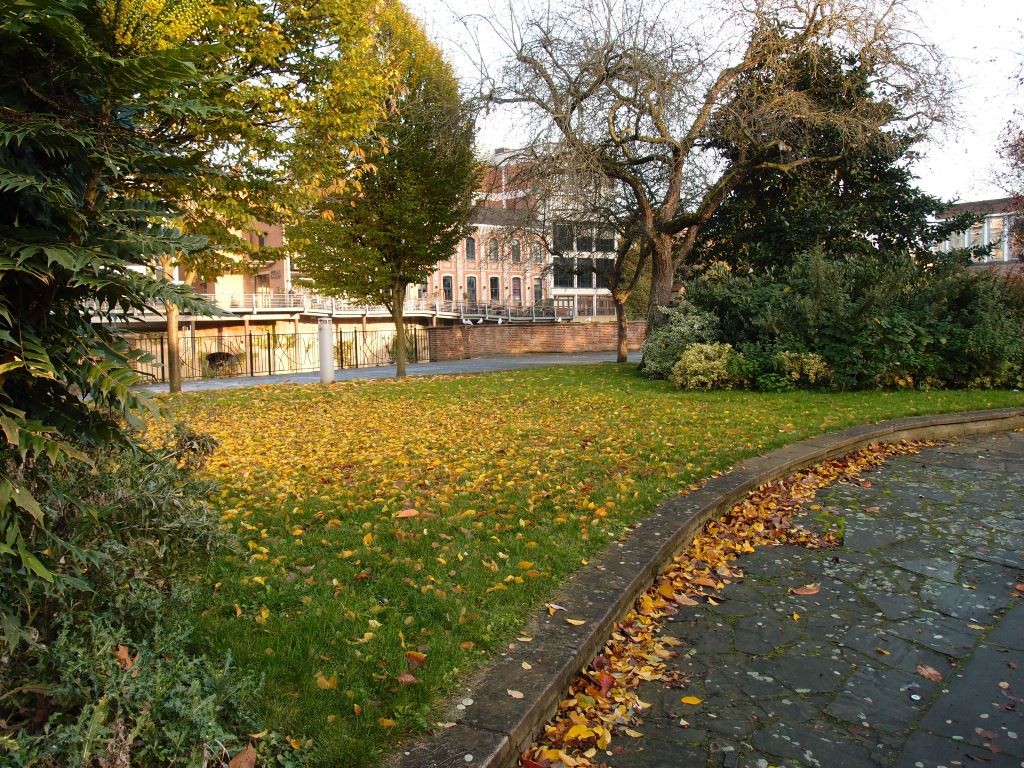 Generally I’ve found that looking through recently submitted planning applications isn’t a cheering experience. Through checks of planning applications I find out about plans to demolish unprotected heritage assets, plans to fell trees and remove phone boxes, and plans to build more tall light-blocking buildings of no great architectural beauty.

So how nice it was to recently read what looks like an uncontroversial planning application for a small and interesting addition to North Street’s riverside gardens.

John Snow has been mentioned on these pages before — and I’m shocked to see it was a whole nine years ago, doesn’t time fly — in a page on the cholera burial ground. A plaque has been added near to his birthplace, on North Street, and this planned memorial is another reminder of his life and work, in a more striking and unusual form:

The installation of a memorial to John Snow to be created using a Victorian style hand pump like those John Snow would have recognized set on a plinth in the center of the existing raised grassed area with an approach path.

The project is a collaboration between the University of York, York Medical Society and York Civic Trust.

The pump wouldn’t be a working water pump, and it wouldn’t even have the necessary handle, but there’s a reason for that. David Fraser of York Civic Trust describes the thinking behind the planned memorial:

John Snow, a son of York, is one of the most influential doctors of all time. His realisation that cholera and other diseases were transmitted by living organisms which live in our drinking water was a breakthrough of the highest intellectual calibre and has probably saved more lives than any other single human idea. That breakthrough is symbolised by the handle he broke off a contaminated water pump in Soho, London. I hope that our memorial will cause many people to reflect on the importance of the man as they sit in a quiet moment beside the river in the centre of York.

Some years back I read a report referring to this garden area as ‘underused’ — a term I’ve often found a little irritating as it seems to mean ‘not used by tourists’. Such places are often well-used by residents. 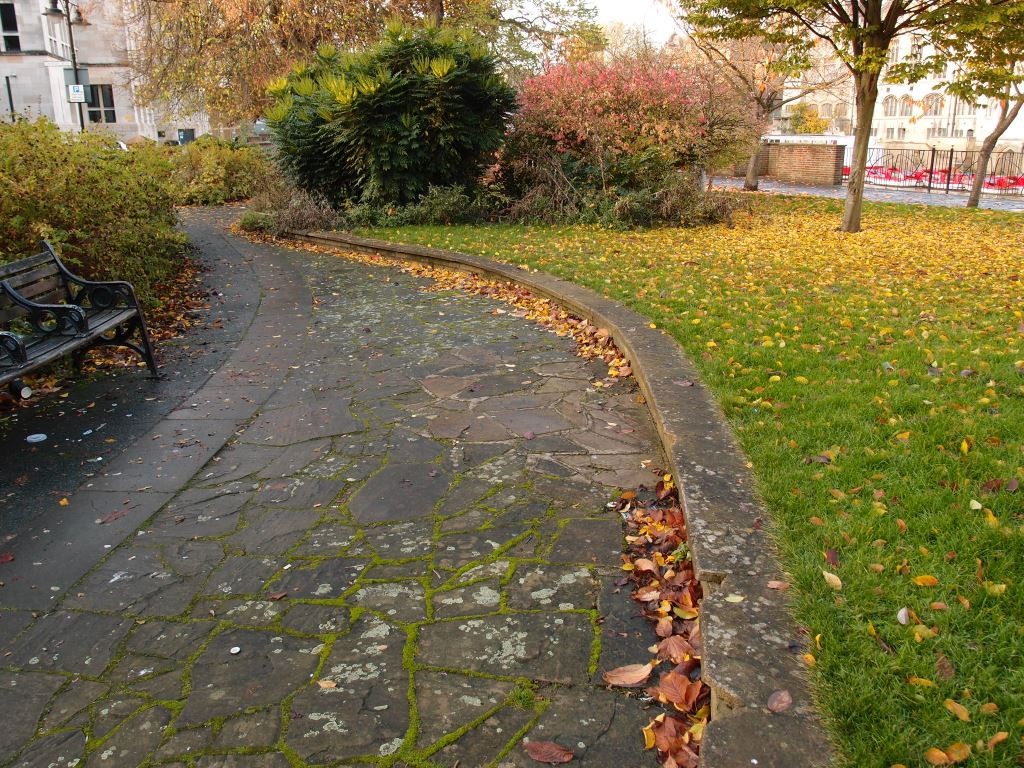 There’s some groovy ‘crazy paving’ (which I hope will be retained, even though it’s a rather dated feature now) and several planted areas containing shrubs and trees, and some grass. A good place to go if you’re wanting a few quiet moments and to sit down on a bench, or just look at some greenery, away from the busier spots like the Museum Gardens.

The proposed memorial would be in the centre of the largest of the beds, in the middle of this grassed area. 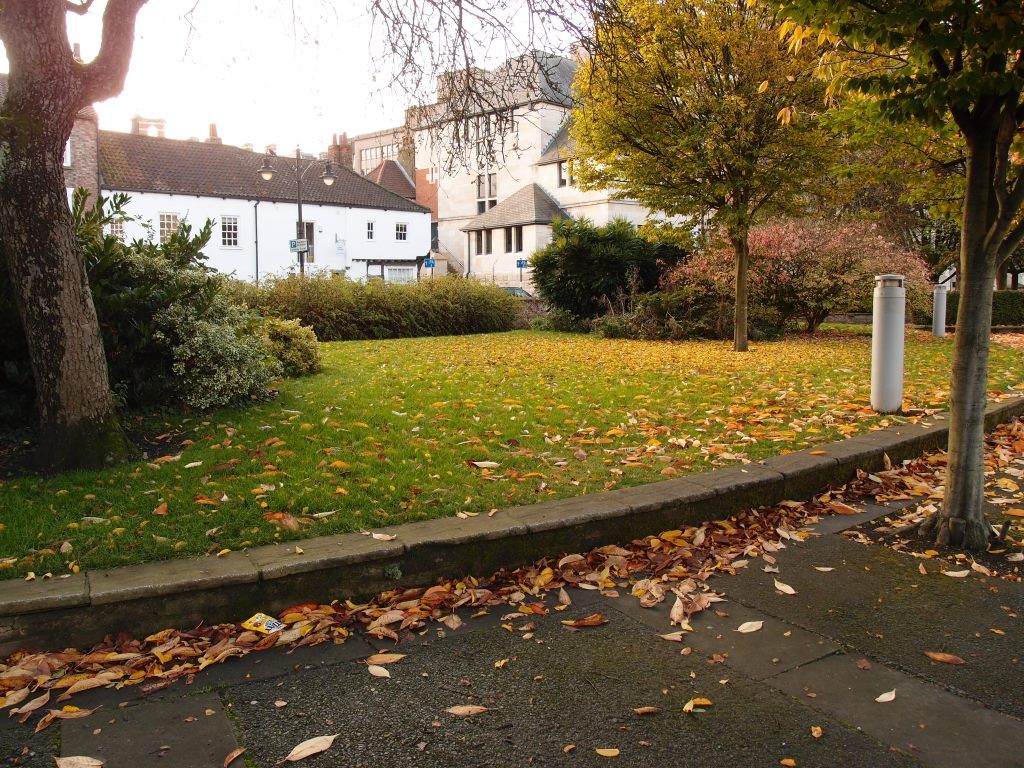 It’s a clever and thoughtful idea, and a way to creatively draw attention to the fact that John Snow was born in this area, before its houses were pulled down.

The only thing that bothers me about it is that it seems to involve paving quite a large area that is at present grass. Here, in the predominantly paved North Street gardens, there’s not much grass, and what there is seems important, and aesthetically pleasing.

Even more important perhaps in the view from the opposite bank, on the walkway outside the City Screen development. I’ve just taken this photo: 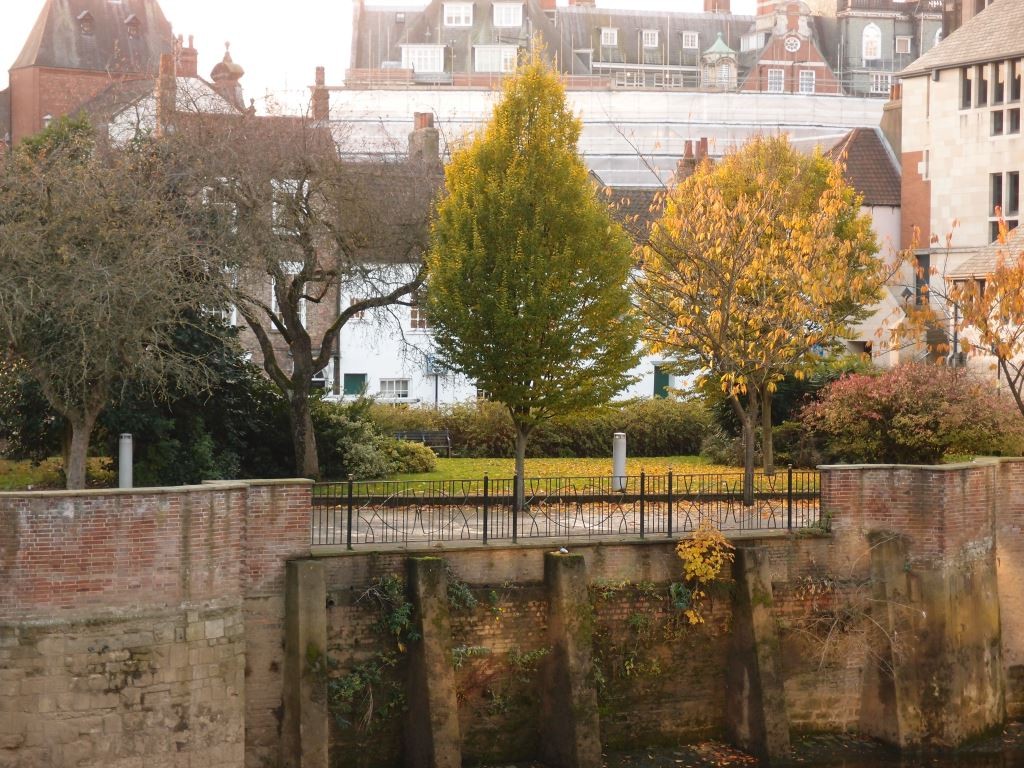 Riverside gardens at North St, from City Screen balcony, across the river, Nov 2016

And took this one in the springtime, one evening, many years ago: 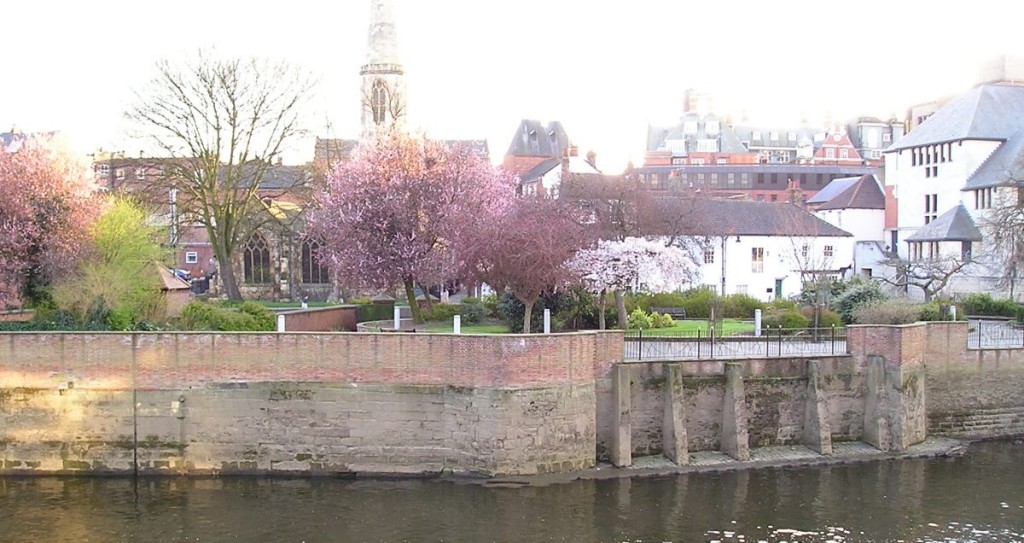 Riverside gardens at North St, from City Screen balcony, across the river (April 2006)

See what I mean about that green patch, to the right of the photo? Seems a shame to lose all that for yet more paving.

The plinth is to be created in natural Yorkstone setts with a Cor-Ten steel surround.

The approach path is to be laid in natural Yorkstone setts.

Turning this area into a small green space was seen as an improvement once the cramped built environment was cleared. Personally I’m not sure about the idea of removing soothing green grass to put back in a reminder of the kind of streets where there was no room for grass, in the form of added ‘authentic’ paving. There’s plenty of authentic local paving around already in the streets and alleys.

If the paving is essential perhaps an existing area of paved surface could be used? 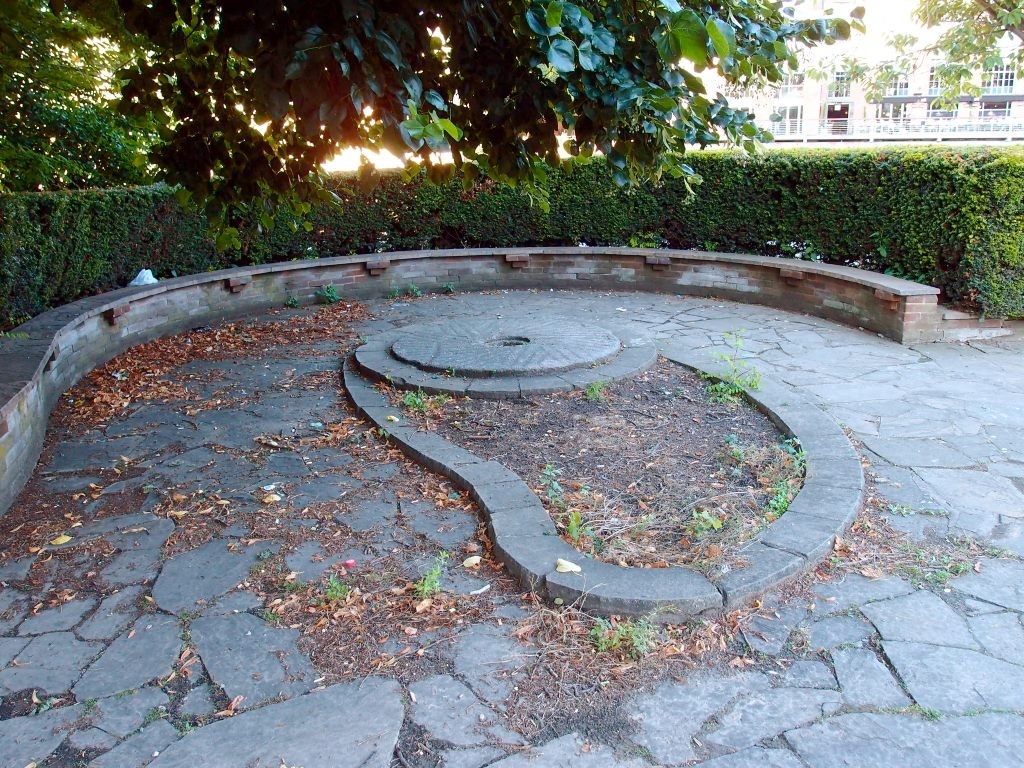 Perhaps that has been considered and discounted already.

Concerns about lost grass aside, I think it’s a really nice proposal, an appropriate and thoughtful recognition and remembrance of a ‘son of York’ who perhaps hasn’t been as celebrated as he might have been.

Comments welcome below, or you may of course prefer to comment on the planning application itself. You can comment in support of applications, not just object to them. ‘Neutral’ comments are also possible, if you just want to add an observation.

Compiling this page has reminded me that some years back a far more intrusive structure was proposed for North Street gardens: the big wheel. Thankfully rejected. But the York Press report ‘Big wheel in North Street rejected by City of York Council‘ (2009) is certainly worth reading. It gives an idea of how this park/garden area was seen at the time, and also includes brief information on its history.

The North St riverside gardens were apparently created in 1959, according to that piece in the Press. It has been difficult to find much information, but perhaps the most important and notable thing is that this small strip of land next to the riverside was gifted to the people of York by Rowntree’s. So another valuable piece of land open to us for our enjoyment, like Rowntree Park and Homestead Park, also Rowntree gifts to the city.

As I mentioned on Twitter recently, after a visit to Homestead Park, it’s hard to imagine anyone now giving valuable land away in that manner, in or near the city centre. But these protected green areas become more and more important as the city becomes more built-up and busy.

I like North Street garden area as it is, but it’s perhaps not universally loved. In the Bartholomew City Guide to York, published in 1980, John Hutchinson called it ‘a fussy garden’ and suggested that the riverside walk running through it ‘has the merit of having made everyone think twice about putting one on the other side of the river’. 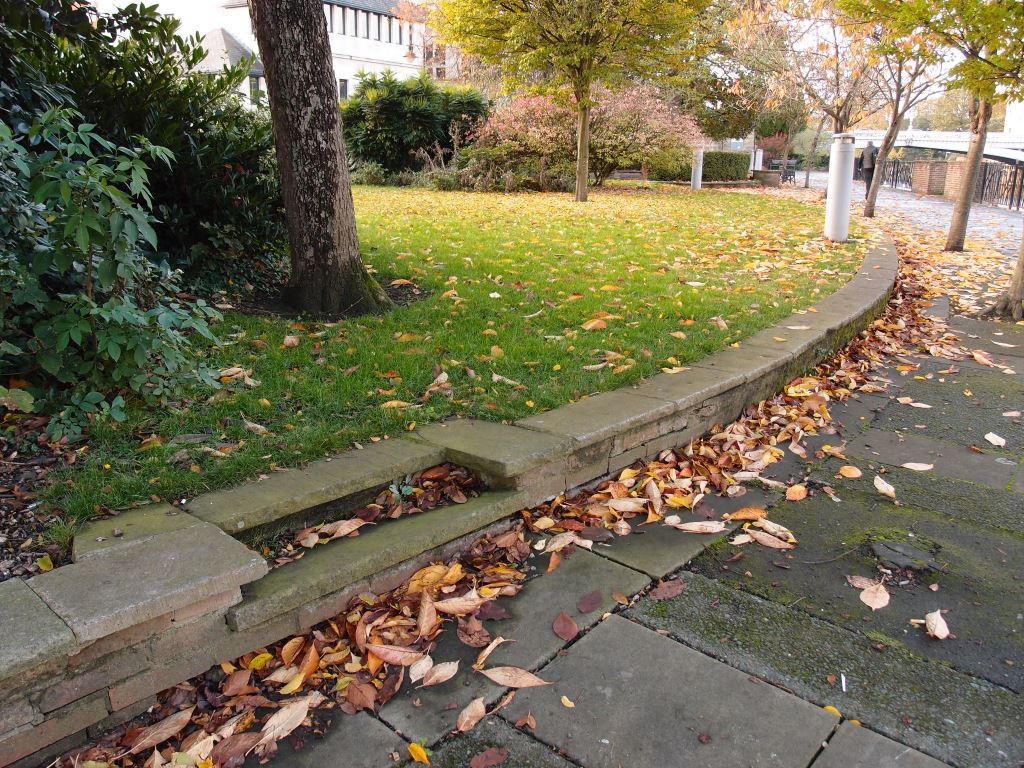 There’s a small step in the edging of this part, pictured above. The only reminder I could find of what must have been the location of a brick shelter I remember being in this garden area, back in the 80s. It was used by street drinkers, as I recall, which is perhaps why it has been removed. Anyone else remember it, or have memories from further back, of the garden area being created?

16/02467/FUL | Installation of Victorian style cast iron pump to form memorial to John Snow | Riverside Gardens North Street York – should take you to the main documents page, where the plans and reports and any comments made are available to read (PDFs). You can login to make a comment.

By Lisa @YorkStories • 12 November 2016 Details, Green places, Planning To link to this page's proper location please use the > permalink.