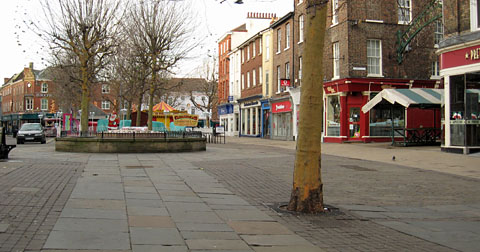 Under what was possibly the most poignant headline I’ve ever seen about an item of street furniture, The Press recently informed us that ‘Parliament Street fountain may never be switched on again‘. Here it is, that low thing with a strange little railing around it. The entrance to Newgate Market is to the right: one of its stalls looks like it’s trying to edge back into Parliament Street …

I have to confess that I’d not really noticed the fountain wasn’t working. All it is to me is a slightly annoying thing in the way on the occasions I dash from Newgate to the bank. It’s just another of those not particularly enduring structures we spent money on in the late 20th century. I wouldn’t have mentioned this fountain at all, ever, if it hadn’t been for a very funny piece by Chris Titley, which suggests various creative uses for the structure now it is no longer spouting water.

It inspired an idea to add to the mix, regarding what we can do with the redundant non-operational fountain structure …

Fountain/mountain of fruit and veg 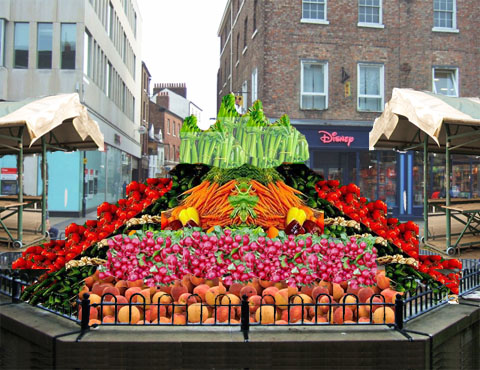 This design makes good use of the slight incline on the existing structure, and in the vision of a ‘fruit and veg mountain’ it fully utilises the existing railing structure, which stops the mounded peaches rolling off. (Not part of the original vision for the fountain: photo. Not sure why or when it was added, but it looks silly, doesn’t it.)

Parliament Street was the home of the market stalls for decades, and the majority think the market should never have left here to move around the corner into Newgate. This central York street is often occupied now by visiting markets and used for special events, but the traditional York market is allowed to use the space on Mondays. After which it has to go back round the corner.

As previously mentioned, it seems likely that a(nother) Sainsbury’s Local is to occupy the ground floor of the old White Swan hotel building, not far away, on Piccadilly, at the end of Parliament Street. This hasn’t been universally welcomed, for obvious reasons, particularly by market traders. If they were given a more prominent position where the shoppers rushing to Sainsbury’s had a chance to see them then that might help. This fruit and veg mountain fountain could serve as a reminder that fruit and veg doesn’t have to come sitting on a plastic tray or in a plastic bag, brought in from miles and miles away. Perhaps to make it more appealing to non-locals (and we all realise that the ‘visitor offer’ is of utmost importance) someone in a historical costume could juggle peaches, discuss the history of this street, or perhaps ponder why its paving is so strangely wonky. I’m planning to do two of those things. More later.