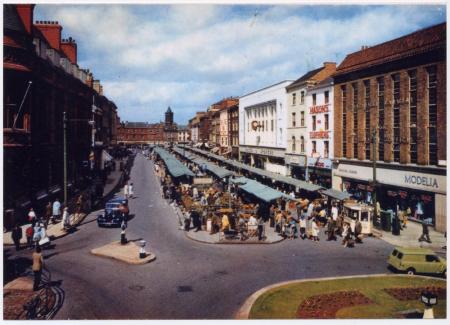 Parliament Street before it had the ‘Splash Palace’ toilet block and the trees, when it was filled with market stalls (and that cute Capaldi ice cream kiosk which has sneaked in on the end there, in front of ‘Modelia’).

This presumably dates from pre-1964, when the market moved round the corner to Newgate.

I think it was probably taken from an upstairs window of what is now York’s most well-known ‘eyesore’ building – the White Swan Hotel on Piccadilly.

Ideas were being sought recently for remodelling this end of Parliament Street – now the toilet block is being demolished – and perhaps altering the layout of the junction. How about this 1960s ‘big roundabout with grass and bedding plants’ idea?

Thanks to Jamie for the photo.