‘An industrial landscape of some grandeur': gasworks

Before we hurtle back to the present day, I want to share these photos from the early decades of the 20th century (enlargeable, and available even larger, see ‘More’, below). 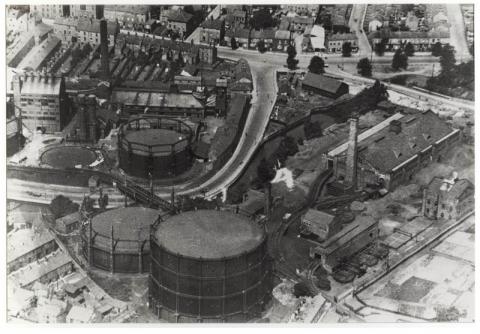 The gas works which once occupied Foss Bank and part of Heworth Green. Hard to recognise now as it’s all changed utterly, but the curving road tracing the shape of the Foss here is the same. Within its curve is now the Sainsbury’s store on Foss Bank, and Go Outdoors (was Homebase). The area to the right has been redeveloped in recent years with apartments, as covered in older pages on this website.

It’s again thanks to a visitor to these pages that I have these photos. Sent in response to an earlier page on the ‘Gasworks gang’. 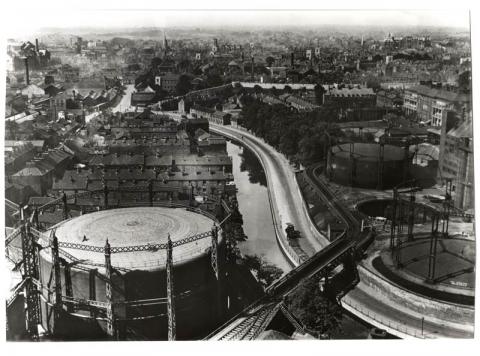 From the same place, but looking towards the city centre. With, in the foreground, gasometers and part of the gas works (or gasworks as I tend to call it, running the words together, as I do with the carriageworks), and the demolished streets off Layerthorpe, including one called ‘Downhill Street’ according to the old maps. Somewhere at the back before the river bends round is ‘Chicory Yard’. Over to the far left, further away, is the Hungate area, chucking out smoke. 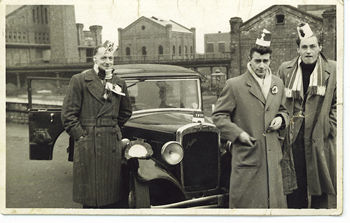 Here’s the photo I included last March, asking if anyone could help me place where it was taken. I thought the buildings in the background were the gasworks, but which part of it, from which angle, wasn’t clear. As can be seen from the above, it was a massive site, on both sides of the Foss, on Heworth Green as well as Foss Bank.

16 months on we have a proper location. We were almost right, but we needed to be over the wall, on what is now part of the Sainsbury’s site. 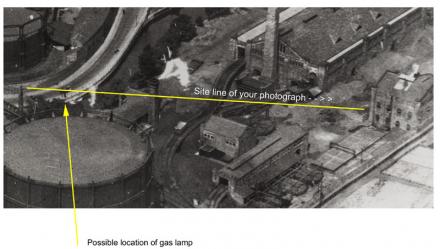 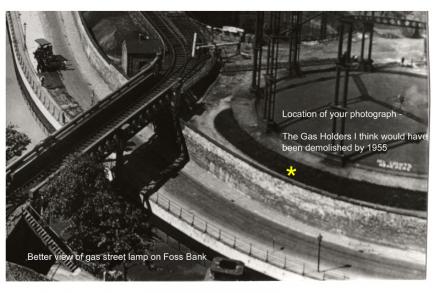 I cared so much about that picture not only because it’s a great photo capturing a happy moment in a now lost landscape, but because the man on the right is my partner’s father. Sadly when this photo turned up in recent years I couldn’t ask him about it. He died in 2002. I remember him telling me about the gas works, about people he worked with, including Wally Knot, in his shed, smoking a pipe.

Thanks to Peter for the photos above, and to everyone who added comments on the page last year to help place the 1955 photo.

I’ve limited disk space on my web hosting, and I’m getting near the limit. The original photos are much larger and I don’t have the space for them here. I’ve put the two aerial views into a Picasaweb/Google album where I hope they can be viewed at their original size, or at least bigger than they are above:

If the embedded widget thing doesn’t work, try this link.

I’ve got no information on the photographer or on who, if anyone, owns the copyright on these.

An earlier page on the Heworth Green development: photos from Foss Bank (2008); some thoughts on the marketing of the development on the gas works site (2007); and a brief mention on a really old page (2004) from when they were digging and decontaminating the site.