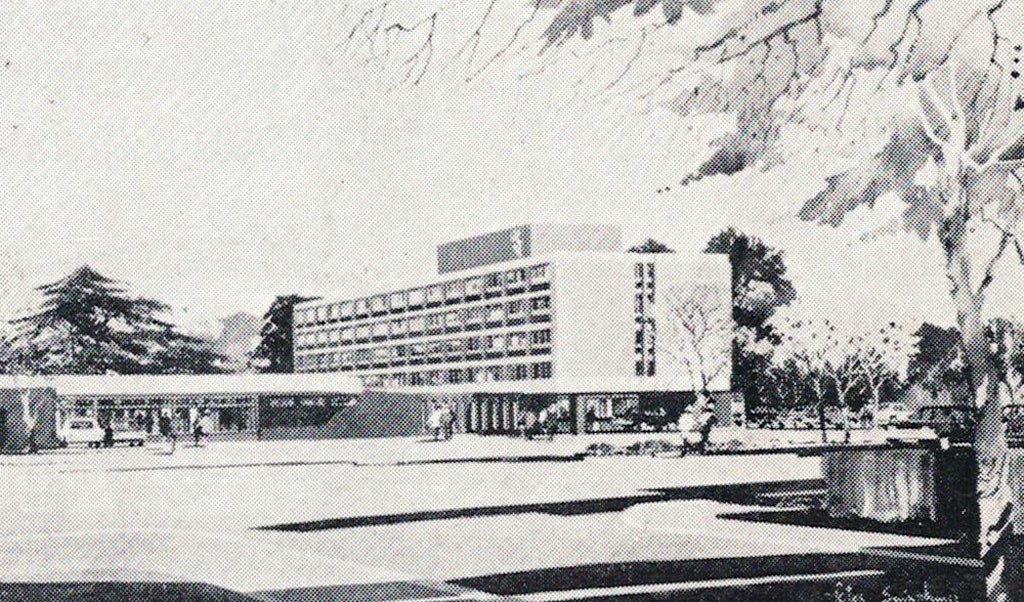 It took a while to get back to 1971 … (apologies for the long gap in communication).

Previously, we were looking at a hotel that opened this year, 2021, in a building that was formerly an office block. Fifty years ago, back in September 1971, a new Post House hotel opened on Tadcaster Road.

A full-page advert in an early 1970s guide to York previously featured on these pages promotes its opening, with a rather attention-grabbing phrase: ‘Stop short of York’. 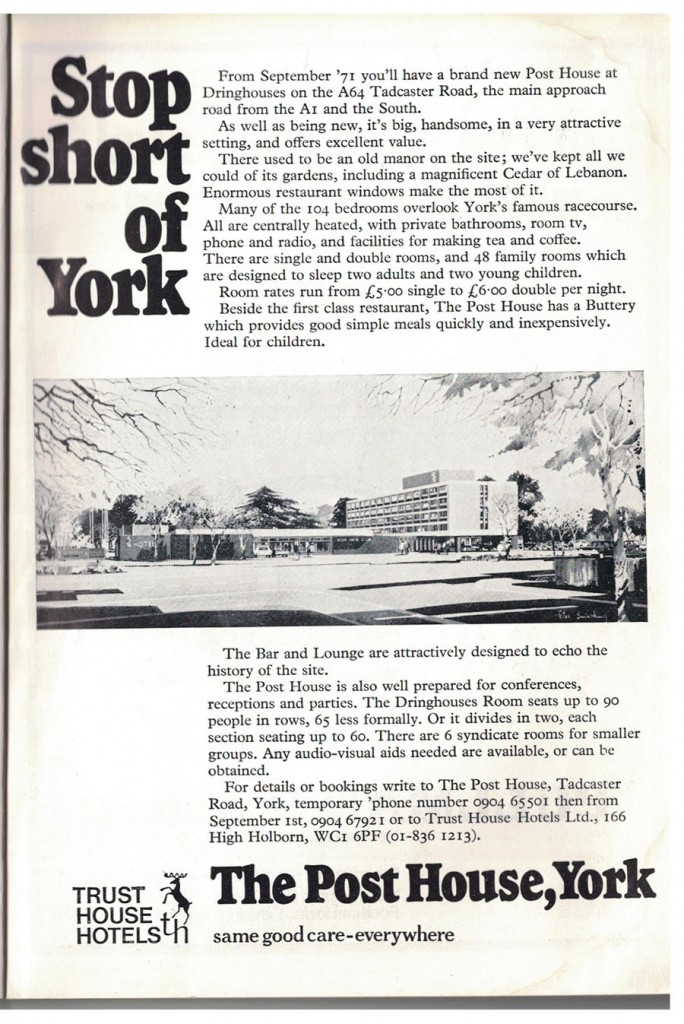 Ad for the new Post House hotel, opening in 1971

‘Stop short of’ — decide not to do something, although you almost do. But in this case, now it’s grabbed your attention, it explains that the hotel is some way outside the city centre, on ‘the main approach road from the A1 and the South’, presumably intending to make a virtue of its convenience for motorists coming from that direction, who won’t have to negotiate driving through the city centre to get to it.

I realised I couldn’t picture this place at all, and had no idea if it’s still there. I’m not up that end of town much, and no reason to be looking at hotels when I am up there. But yes, it is still there. Cherry Lane, off the main Tadcaster Road, runs alongside it, and Google Streetview shows how it looks now from Cherry Lane, from a similar angle to the illustration above. It’s now a Holiday Inn. 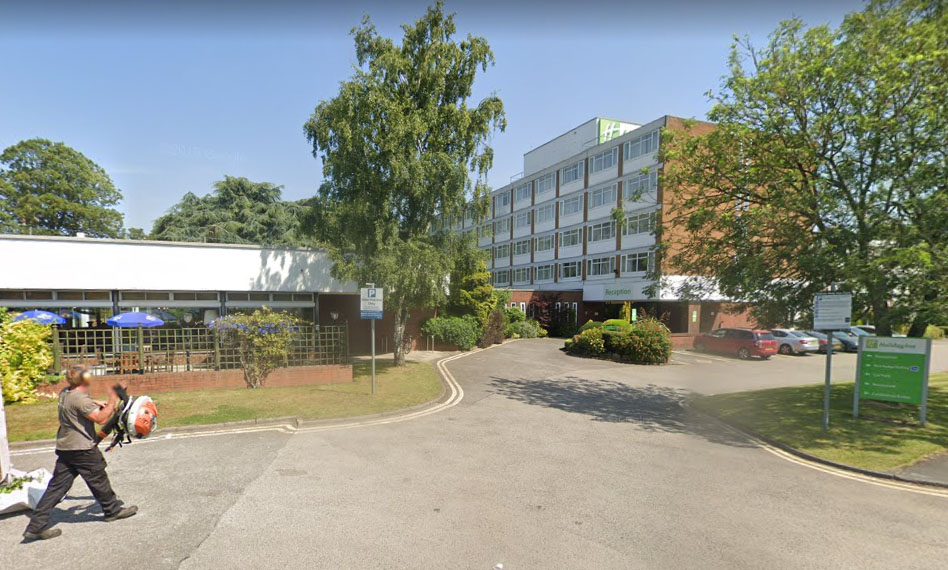 When it opened, 50 years ago, it had 104 rooms, described in the advert. ‘All are centrally heated, with private bathroom, room tv, phone and radio, and facilities for making tea and coffee.’ This doesn’t seem like the height of luxury now, but presumably seemed so back then. Though it’s not clear to me how ‘posh’ this hotel was, at the time.

As a comparison, in the same publication there’s an ad for a country guest house in Acaster Malbis. It states, that ‘all bedrooms have hot and cold water, room-controlled central heating (all the year), electric razor points, bedside lights and electric blankets’.

We always went self-catering, and I was just a young child at this time. I’m struggling to get the context of the Post House hotel experience of the early 1970s, and the level of luxury offered.

The 1971 advert also makes a point of referring to the history of the site: ‘There used to be an old manor on the site; we’ve kept all we could of its gardens, including a magnificent Cedar of Lebanon.’ I’m not sure how common it was back then for mature trees to be kept when a site was cleared for redevelopment.

But what about ‘the old manor’, I wondered. Would we now completely demolish an old manor house to build a new hotel? What kind of state was it in? Perhaps in a ruinous condition and thought not worth saving?

I’ve not been able to find any images of the ‘old manor’, or much information about it in general, but it’s shown on old maps.

I tend to forget that this area of Tadcaster Road is called Dringhouses. But the old maps remind us that Dringhouses was a coherent old place, with a church and a manor house next to one another, before the Post House hotel was built on the site of the manor. Here’s the satellite view from Google for comparison, with the church and the hotel next to it. 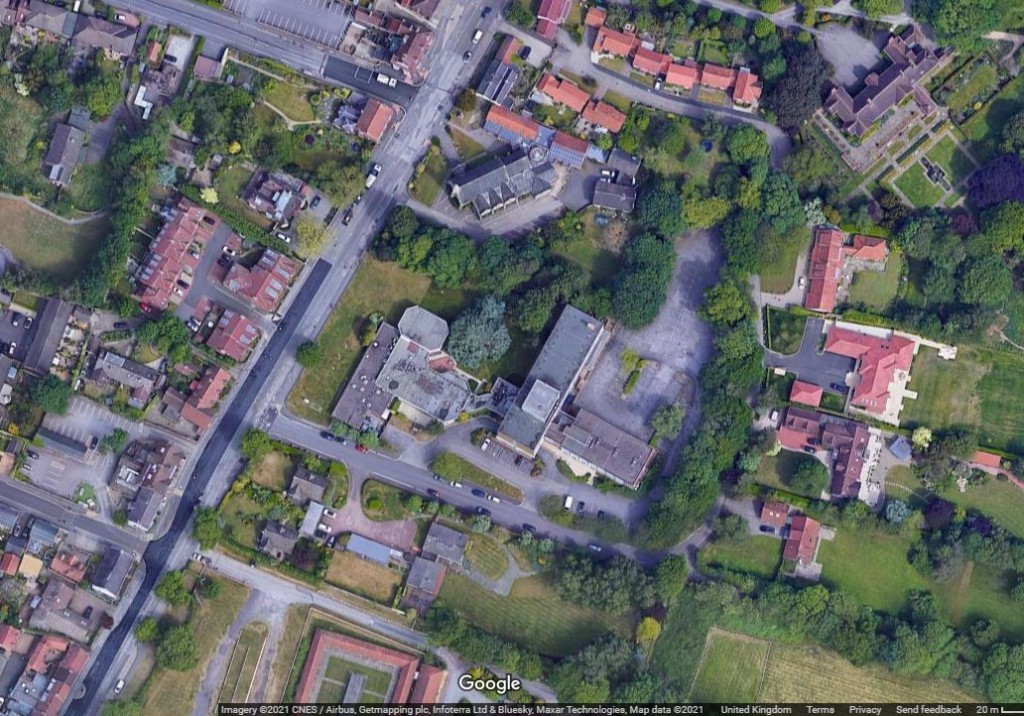 Clearly there’s a lot of tree cover and space between the two, but it’s hard to imagine a development like this in other historic settlements outside the city walls, with a similarly large modern hotel built next to a church. I wonder if there were any objections to this development at the time.

Interesting to note that there’s a planning application for a nearby development going to the planning committee tomorrow (2 Sept) (ref 20/00507/FULM). The applicant wants to build a retirement complex, just across the other side of Cherry Lane from the hotel, on the site shown towards the bottom of the aerial image above (plan here, PDF). However the committee report recommends refusal, stating that the proposed development ‘would harm the visual amenity of the streetscene, the form and character of the adjoining section of Tadcaster Road and the setting of the Tadcaster Road Conservation Area.’

It’s difficult to ignore the fact that the large 1970s hotel is also rather obvious in the streetscene. As a comment in response to an article in the Press puts it: ‘This would really spoil the view from the beautiful and historic Holiday Inn.’

The recommendation for refusal of the proposed development perhaps illustrates the difference in our approaches to planning and conservation matters, compared to 50 years ago.

Anyway, time to head back into the present, heading into town, along that historic route in from the south. From the corner of Cherry Lane, past the hotel, and the church. Glancing up, as we do, at its spire. This is apparently made of fibreglass, which surprised me.

I wondered if I have a photo of it … just this slightly blurred one, through trees. 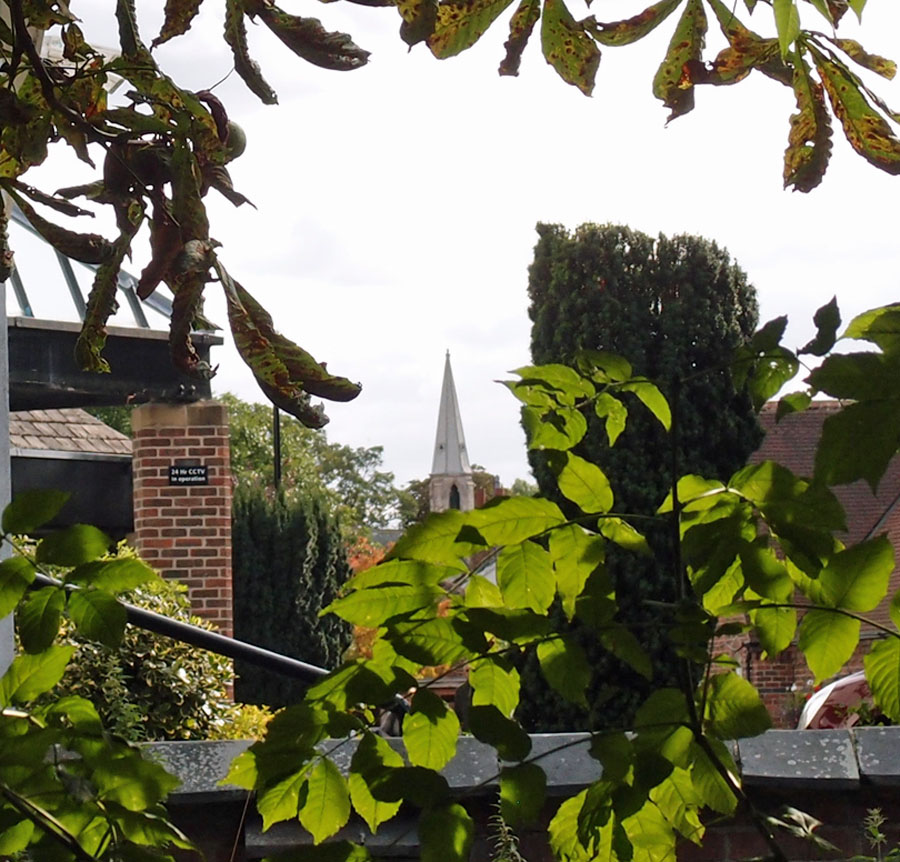 Spire of St Edward the Confessor, Dringhouses, from the Knavesmire, Aug 2018

I wondered if it was common to replace church spires with fibreglass replicas. I found a couple of other examples, including this one.

The church, St Edward the Confessor, is a Victorian era rebuilding of an earlier church on the site. By the second half of the 20th century the church appears to have been rather dilapidated and in need of repair, and the fibreglass replacement spire was part of that, erected in 1970. As construction of the hotel would have been taking place alongside it at around the same time, there’s perhaps a connection there. Perhaps anyone who knows more will add information in the comments below.

Likewise, if you remember the Post House in its early days, or the old Manor House before it, your local insights and knowledge are welcome, as always.

Many thanks to Edward Waterson, who after reading the above sent me photos and information on Dringhouses Manor, demolished to make way for the hotel. 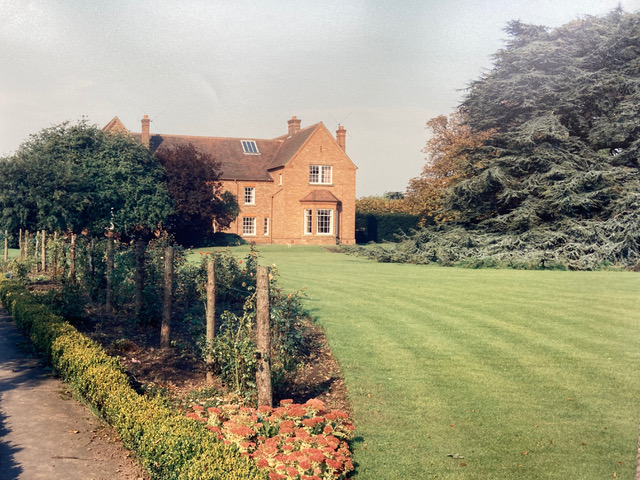 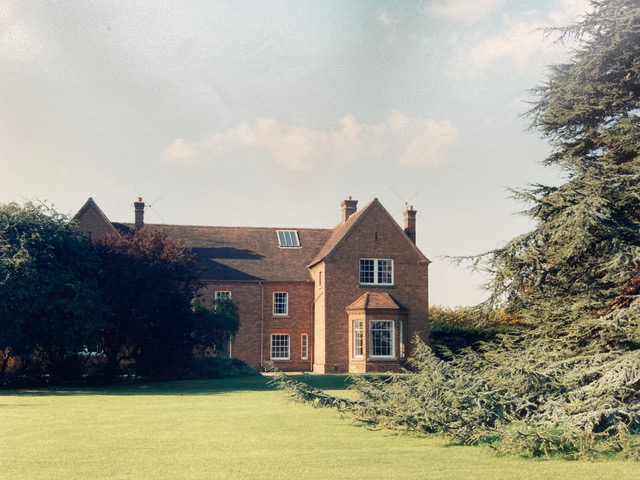 The cedar tree, mentioned in the advert above, and apparently still on the hotel site, is on the right in the photos above.

The manor house doesn’t look like an ancient dilapidated dwelling, which is how I’d imagined it must be. Indeed it looks smart and well-maintained, and not particularly ancient. This is explained in the information Edward sent to accompany the photos.

When the owner of the Dringhouses estate, Col. Eason Wilkinson, died in 1941 the manor house was bought by F W Shepherd, who reclad it. A much older house (?17th century?) was encased in modern brick.

He added: ‘The family formed St Edwards Close to the rear of the hotel and kept some cracking good plots for them to build new houses on, referred to locally as Shepherds Bush.’

Thanks too to Andy Walker, who has sent me another photo of Dringhouses Manor, this time taken from the front. 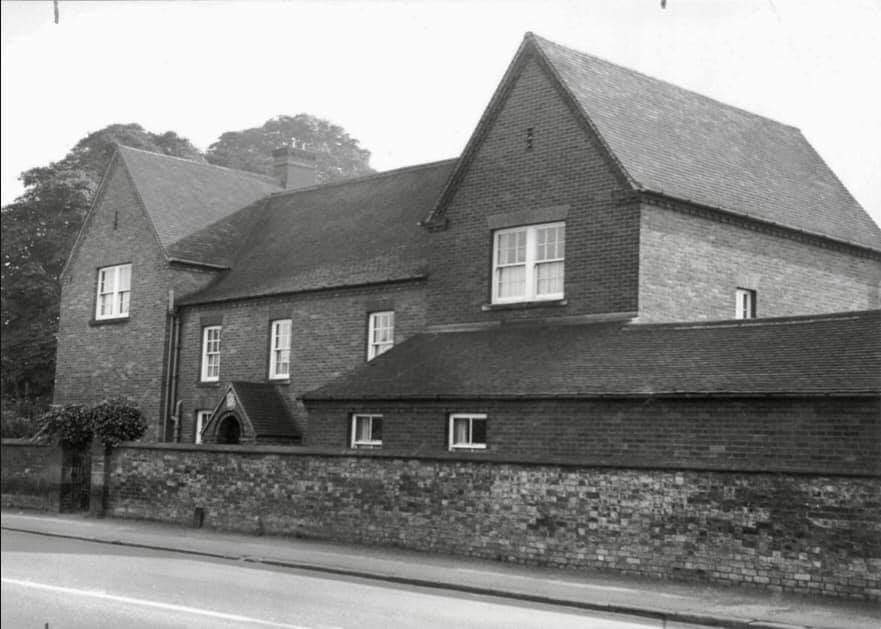 Lisa @YorkStories is the creator, administrator, and writer of content on www.yorkstories.co.uk. She can be contacted on this link or via Twitter, @YorkStories
View all posts by Lisa @YorkStories →
Tagged  1970s, hotels
To link to this page's proper location please use the > permalink