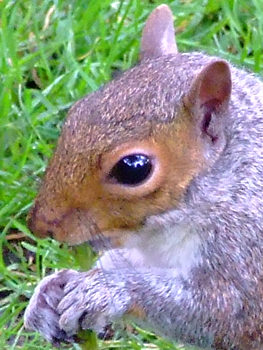 The mature natural landscape of the gardens supports many species, but the ones we notice most are squirrels and pigeons, these days. I sat down on a bench in the gardens one morning in January and attracted the attention of what was apparently the entire population of pigeons, as well as one or two squirrels, flocking (or scuttling) about me, in the hope of food.

Pigeons and squirrels are both considered pests by many people, as they’re so successful in breeding and increasing their numbers. But the squirrels certainly entertain visitors to the gardens, and the pigeons have some friends, among the more enlightened souls who know that pigeons are clever, and that some of them even got medals for public service, though these days they hang around pathetically, in search of crumbs from pasties.

Other less common creatures inhabit the corner by St Mary’s Tower. Bats, foxes, sparrowhawks and a roosting tawny owl have been seen in this area, around the semi-derelict hutments, in an area currently separate from the Gardens. The area is to be cleared, which will presumably also clear out many of these creatures. Wildlife seems to prefer scruffy corners. 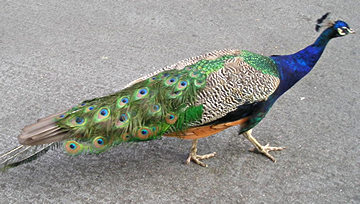 The Gardens were once home to a particularly glamorous and exotic creature. Not that long ago there were peacocks wandering around here, with their handsomely iridescent plumage. This one, probably one of the last, was pictured in 2004, nearby on St Leonard’s Place. The peacocks did wander, often onto nearby streets. It was always an amusing and rather magical sight, watching the traffic stop on Museum Street while a peacock made its stately way across the road. 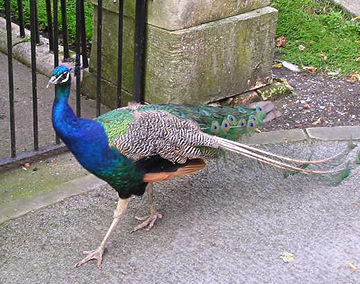 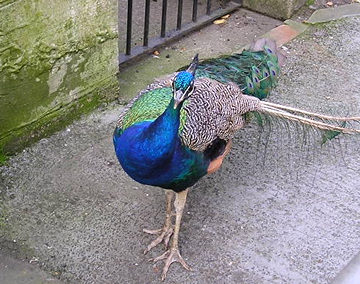 A friend once told me that one of the peacocks used to get on a bus, but I think she was having me on. Whether it travelled by bus I’m not sure, but a stray peacock did find its way up to the far end of Bootham, where for a while in the mid-1990s it occupied gardens near the Churchill Hotel, and used to let out a rather mournful call, waking nearby residents in the early hours.

I don’t know who introduced the peacocks, which I remember being in the Gardens throughout my youth, and I don’t know exactly when we lost the last one. They were beautiful, and delighted residents and visitors alike, particularly when displaying those spectacular tail feathers, but it wasn’t really a good place for peacocks, in the middle of a town centre. 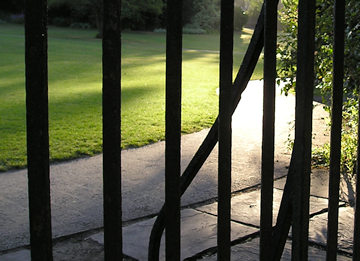 It’s surprising though, how many species live amongst this city centre greenery, and indeed also that the city centre greenery survives the attentions of certain creatures. One summer solstice, about twenty years ago, I went for a walk at dawn, passing here, and looking in through the railings saw a group of rabbits, gathered on the grassy lawns, in the first light of morning.

I don’t have a photo, only a photo taken through the railings on another morning as the sun rose, so you’ll just have to imagine the rabbits, noses twitching, deciding which important botanical specimen to have a nibble at next.

York Stories is a resident’s record of York and its changes. It is supported by your virtual coffees.