An unusual sight, from West Offices

At first glance this appears to be just a rather unremarkable photo of a bus in a street on a gloomy wet day. 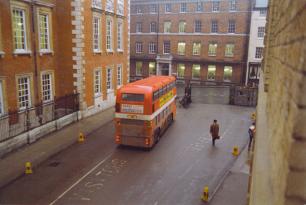 If you know York well, you’ll know that it’s not usual to see buses and other everyday through-traffic on this short stretch of road between the two ‘railway offices’. (For decades they were known as such, now the one on the left is the Cedar Court Grand Hotel, and West Offices is to be the new City of York Council HQ.) 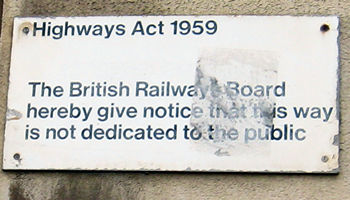 At one end of this short road are ornate gates, and if you’re observant you’ll have noticed that on the wall at either end are small signs referring to the ‘Highways Act 1959′, and declaring that this is not a public right of way.

It’s still a private road. The Cedar Court Grand refer to the ‘private road’ status when answering queries regarding parking on tripadvisor.com.

Who owns it now? Do the ‘British Railways Board’ still exist? Do they own lots of random small bits of road all over Britain?

So, back to the bus. The private road was opened to traffic during one of the floods. Before our flood defences were installed/improved, the river levels in the city centre rose so high as to flood streets close to the rivers. Rougier Street, the normal bus route which runs parallel to this road, was presumably so flooded as to be impassable.

This opening of the ‘gated close’ to everyday traffic was clearly of interest to the railway office workers, one of whom was my dad. This photo was taken from an upstairs window of West Offices, in January 1982.

Any memories of this/information on the quirky little ‘BR’ road, please leave a comment.

By Lisa @YorkStories • 17 April 2012 Miscellany
Tagged  floods, West Offices
To link to this page's proper location please use the > permalink