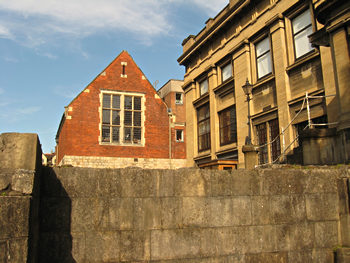 One of my favourite areas is beyond the ruins and the concrete paths, where the view outwards has the buildings of the King’s Manor site huddling together on the boundary, the work of different centuries, with the Minster towers visible on the skyline behind, and the green grass in the foreground.

In this photo, part of the King’s Manor buildings forms a contrast with the rather more modern Tempest Anderson Hall. This hall, an extension of the 19th century museum building, was built in 1912, from shuttered concrete. Concrete is so often hideous, but this building is generally recognised as handsome and in keeping with its surroundings.

In the 1960s, ‘Concrete Quarterly’ said of Tempest Anderson Hall that it had weathered ‘with distinction and even vitality,’ and pointed out that this should be noted by ‘all those who worry about concrete growing old gracefully’. (The concrete-promoting publication was obviously on the defensive in the face of all the concrete that doesn’t weather like this but just looks more hideous as the years go by.) 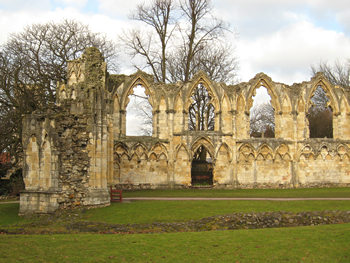 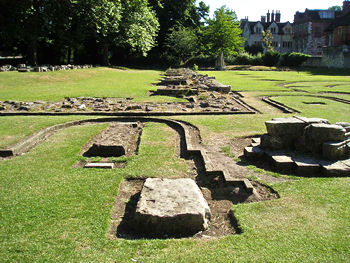 The abbey ruins are of course the central point of interest to visitors, and the reason the Yorkshire Museum and accompanying botanical gardens were established here. There’s a lot more to say about these ruins, another time. For now, most of us I think remain somewhat baffled by how it all fitted together, despite these concerted efforts, some of which also appear to be made out of concrete, to mark out the area for us, around existing fragments. 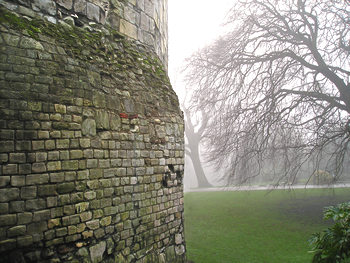 Here’s the ‘Multangular Tower’, solid and known, enduring through centuries, through sunshine, and foggy days, shown here on a foggy one. One of many layers of history represented by the buildings surviving in these Gardens.

There are concerns that we don’t understand enough of the history of this place, don’t always appreciate the historic significance of the remains of earlier ages, or as the Plan puts it, we don’t see that we have ‘a huge permanent historical cultural offer’.

People can feel the historic atmosphere of a place, even if they can’t reel off a list of relevant historical facts.

I remember when friends first showed me the ‘Anglian Tower’, on the other side of this wall, behind the library.

We thought the ‘Anglian Tower’ was magical, even though we didn’t have a clue how it fitted in with the other remains. Its charm was that it wasn’t signposted, it seemed like a secret place. 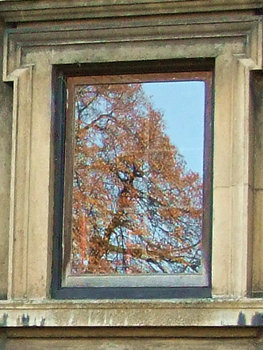 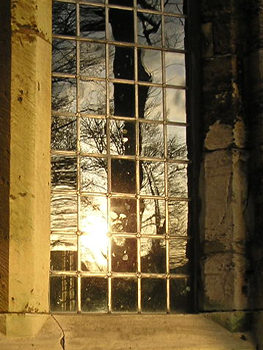 Back to the Tempest Anderson Hall again. Or rather, to a detail I noticed on a photo I took in 2007, where a window caught a reflection of the nearby trees, turning colour in the autumn, against blue sky. One of the charms of the Gardens is the juxtaposition of solid, relatively unchanging buildings with the ever-changing natural display of plants and trees through the seasons. The second photo to the left shows trees in April, not yet greened-up, in the smaller leaded panes of the Hospitium windows. 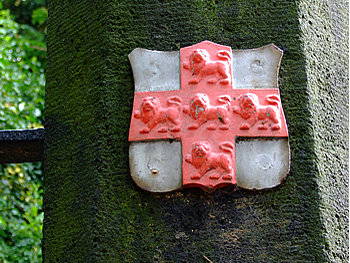 The riverside boundary is marked by railings between stone posts – this one marked by the York city arms. These, like other structures in the Gardens, are Listed. According to the official record they are ‘railings with carriage and foot gates’, which explains why the gates vary in width. They date from 1844 and were made by the John Walker foundry – a local firm of some importance, whose ironwork can be seen all over York.

Those whose job it is to have ‘visions’ for ‘improving’ the city have suggested that the access from the riverside to the Gardens could be opened up, which presumably would mean the removal of these railings and their charming painted plaques.

When presumably the only reason the Museum Gardens have survived as long as they have in a city centre location is because they have boundaries and are closed at night.

More: wildlife in the Gardens >

The Museum Gardens Plan: A Garden for York 2010-2015 is available from this page on the website of the Yorkshire Museum, or the PDF can be found on this link.