Stone sarcophagi have been visible in the grounds around the Yorkshire Museum, particularly near the Multangular Tower, for years. Curious relics, though I’m not sure whether people are curious about them. There were some inside what we used to call ‘the tunnel’ in the Museum Gardens – the remains of St Leonard’s hospital near the gate from Museum Street – and we used to use them as seats. Perhaps in an effort to make us stop taking these historic relics for granted, they’ve been moved around of late, and a few have been arranged in a jaunty fashion in the flowerbeds.

I don’t recall seeing these particular ones before, noticed in April 2011, placed near the disused bowling green just north of the abbey ruins. These are fancier, carved with figures and inscriptions. The Latin inscriptions have apparently been partly recoloured recently, presumably to make the lettering more distinct.

Sadly I’m unable to translate the inscriptions, as it’s a long time since I did O’level Latin. 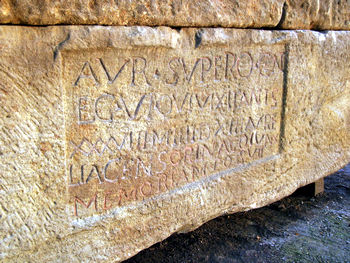 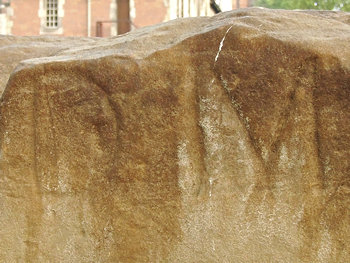 Records of the ‘antiquities’ donated to the Yorkshire Museum in the 19th century suggest it may have been overwhelmed with donations of bits of Roman stone. There was obviously an enthusiasm for preserving antiquities, and the opening of the museum meant there was now somewhere to put them. Roman sarcophagi were discovered all over York during the building work of the 19th century, dug up during the construction of the railway station(s) and as the well-off folks built grand houses on the main roads from the city.

‘DM’ is apparently a common abbreviation, and stands for ‘Dis Manibus’ – ‘to the spirits of the dead’.

Since compiling this page I’ve noticed that there’s a posting about the sarcophagi on the York Museums Trust blog which includes translation of some of the inscriptions.