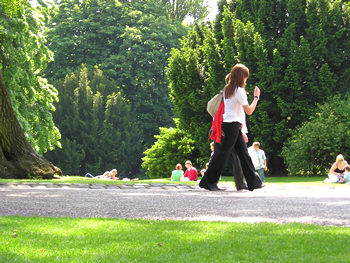 A great deal of effort has gone into this place, since the Yorkshire Philosophical Society took on the site in the early 19th century, and in its more recent management by the local authority and York Museums Trust. As we’ve always known it being here, I guess we tend to take it for granted, and most of us probably aren’t aware of the work involved in its initial creation and its continued maintenance. I’ve read recently a plan for the Museum Gardens (see link below), and it’s clear that those who manage it and are responsible for it have spent hours in meetings and presentations and report-writing, while most of the rest of us have just been sitting on the grass having a sandwich or wandering through it on the way on to somewhere else. 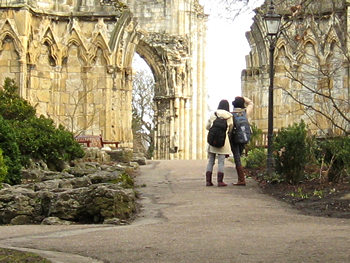 It’s ‘our park’, and most residents feel a strongly emotional, if often rather vague, attachment. But in the 21st century the needs of tourists take centre stage, as employment in tourist-related jobs has to replace the jobs lost from our traditional industries. And as the tourism industry becomes ever more important to the powers that be, having a ‘vision’ for our Museum Gardens, focussing on the perceived needs of tourists, is seen as essential.

For starters, more signage is apparently required – though residents don’t need it, we already know the quieter corners. And perhaps would prefer them to remain off the tourist trail. We have to have somewhere to hide … 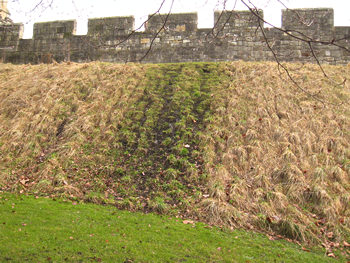 In January 2011 I noticed this marking on the bank up to the walls on the Museum Street side, where the brown dead grass of winter gave way to a bit of green, and a muddy line. These ‘desire lines’ show where people want to go, where they have been going. I climbed up, having never been up there before. There wasn’t much of interest, apart from the slightly higher viewpoint. Just an empty cider can. Alcohol consumption is banned here, as in many other areas, which doesn’t stop people drinking, it just means they hide in corners, and leave the debris of their drinking behind them. On occasions like this I sometimes pick up the litter and put it in a bin, but on this occasion was more worried about how I was going to get back down the muddy slope without falling on my backside. 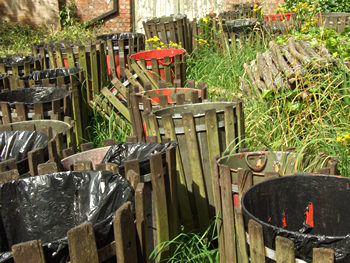 Anyway, there appear to be no bins available in the Gardens. One summer a few years back, while noseying around the quieter corners, I discovered this ‘bin graveyard’, where it appeared that the litter-collecting receptacles had been laid to rest.

These bins are a bit 1970s, and I thought maybe they were being replaced with bins of a modern design. In fact they haven’t been replaced. Reading the Museum Gardens Plan made it clear that having no bins is a policy, not the consequence of awaiting new bins. 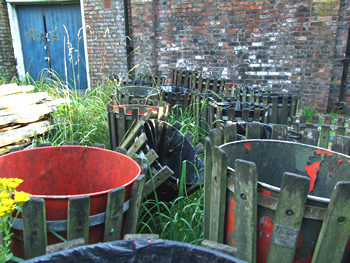 Perhaps we should adopt this policy universally, and just give up, as they seem to have done here. Instead of encouraging rational adults to find somewhere to put rubbish, we should accept that many people haven’t evolved past the childhood stage, and that they assume some caring mummy-type figure will magic away things they chuck on the floor. Apparently litter-pickers here fulfil the caring mummy-type role, presumably having the same reassuring and comforting effect on people who haven’t evolved past the early developmental stage when it comes to their own waste. 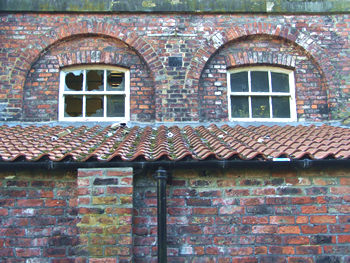 One of the most surprising comments in The Museum Gardens Plan is that the gardens have acquired an ‘unfortunate reputation for being an unsafe place at certain times of the day.’ I’ve never felt unsafe here, at any time of the day. There are many aspects of the Plan that I find a little confusing – I wonder whose views were canvassed in the making of it.

For example, from the Plan: ‘People do not have a strong sense of arrival or welcome. They are not aware of all of the boundaries of the garden they do not know
where the garden starts or finishes, consequently many parts of the garden are underused.’

Let’s not fudge the issue – where it says ‘people’ it means tourists/visitors. And that word ‘underused’, in this and all similar documents, means ‘not visited enough by tourists’ – the areas in question are usually well-used by residents.

If we’re curious, most of us are capable of investigating what’s round a corner. 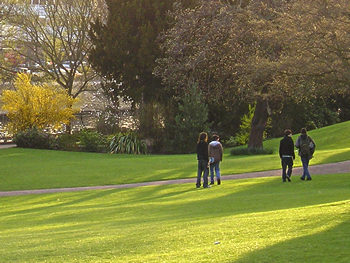 Anyway, enough about tourists and bins, and back to the heart of things. This is our special, classy, historic park, a garden for all of us. It has buildings reflecting the religious devotions of our ancestors, and buildings reflecting their desire, and our desire, to study and learn. It has trees that have reached a champion girth and height. It has bats and birds, and witch hazels flowering in the gloomy winter months. It is visited by residents who pop in during lunchtimes, by those who pass through on their way into town, by groups of young people on summer afternoons, by homeless people seeking shelter at night. It’s also, I noticed, and vaguely remember, a refuge for the occasional young person who looks like he or she should be at school, but looks too sad and scared to go.

A proper people’s park. A refuge for residents. Long may it remain so. And may we learn to appreciate it more.