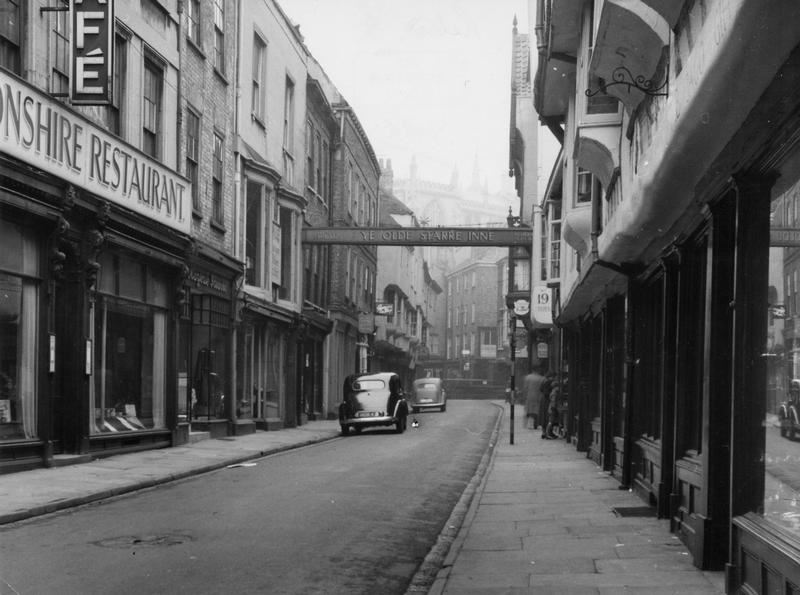 Stonegate in the 1940s/50s. Photo: Explore York Libraries and Archives

In recent days there has been angry reaction to the rather patchy state of the paving in Stonegate, and a petition has been set up. It’s reminding me, in some respects, of another paving-related controversy in 2013.

Then, as is so often the case, it was enlightening and interesting to look back at images from the archives. So I thought we could do that again, with some images of Stonegate, in times past. They’re all from the online collection at Explore York Libraries and Archives.

Specifically, I’m trying to draw attention to the changes in the surface of the street.

It looks rather ‘earthy’ and cobbley in the late nineteenth century. By the mid twentieth century the road surface appears to be tarmac/asphalt.

Many of the comments on the petition and elsewhere online regarding the removal of slabs (broken, apparently, and so needing to be replaced) make it clear that some people are upset, outraged even, at what is seen as our history being destroyed. I don’t like to see people being upset and outraged, so let’s stand back and calmly consider the issue.

Here’s another photo of Stonegate, in the late nineteenth century: 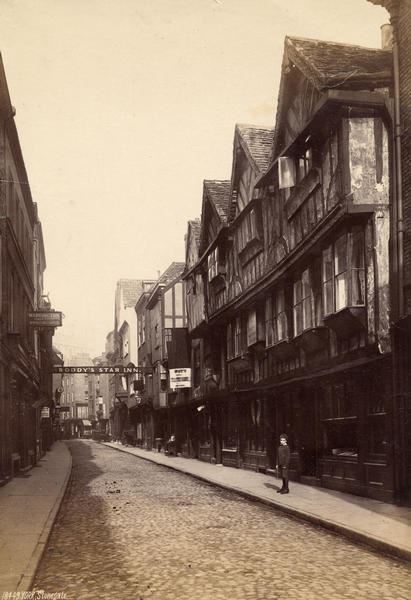 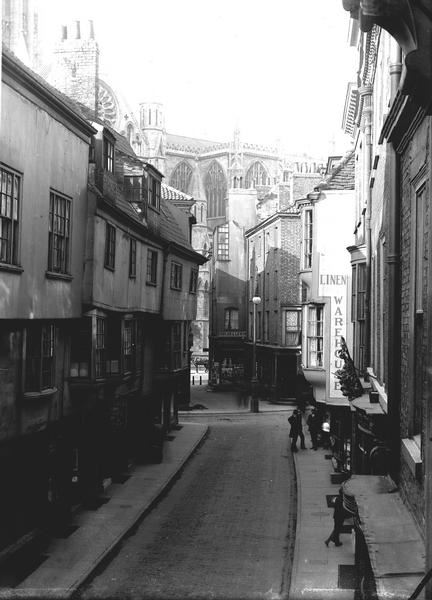 Another from the mid twentieth-century: 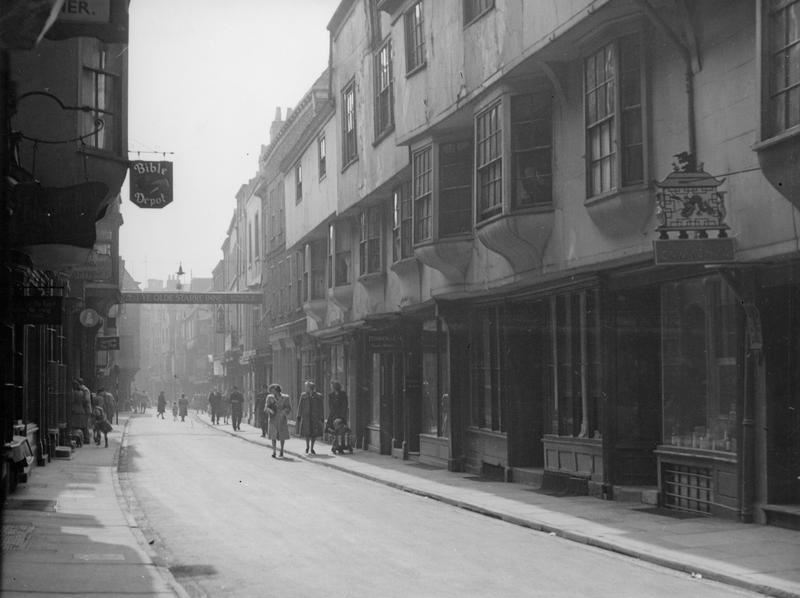 And one from a little later, early 1970s perhaps? 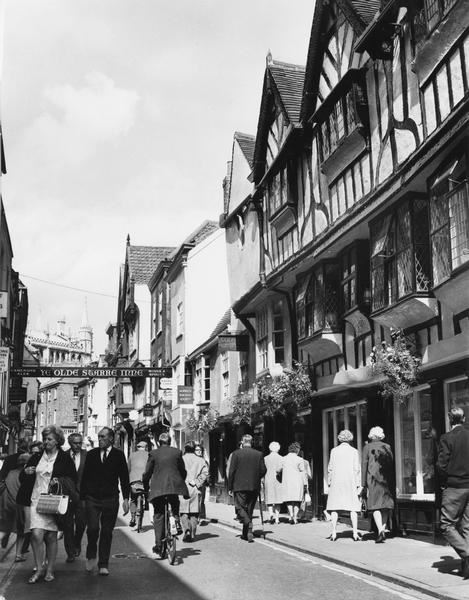 No stone slabs across the roadway, from the 1880s to as late as the 1970s, according to this photographic evidence.

Fact is, these stone slabs in Stonegate are a relatively recent addition. Some sources say that they date from the 1970s, others the 1980s.

Clearly the actual stone, being natural stone, is in itself old and venerable, but its arrangement here as a surface for the roadway is quite recent history. As was the case with the cobbles and cart tracks in Kings Square.

Though a relatively recent addition the stone slabs are clearly accepted as somehow fitting with what we think a street called Stonegate should look like. But let’s not assume that there’s something historically accurate and ‘authentic’ about it.

‘York stone’ is a widely accepted term we tend to use without thinking about it. I know I have. We tend to use the word to refer to any natural stone in slabs. In this particular paving controversy the name seems to have been taken as a sign that this stone somehow ‘belongs’ to York, as if there’s a quarry for it somewhere in the city or its outskirts.

The Stonegate slabs are apparently English Pennine sandstone, so they’re coming from some distance away. And they’re very expensive. And, according to the Streetscape Strategy not the best road surface:

Streets with stone setts and cobbles should be conserved and maintained. The exception is Stonegate, unusually surfaced in riven English Pennine sandstone flags in the 1970s. As a carriageway material this has proved to be a dramatic failure and requires expensive and continual maintenance due to the impact of heavy delivery traffic.

I guess what we’re seeing at present is part of that ‘expensive and continual maintenance’. In a footnote it continues:

Discussion of authenticity and history is one thing, but the bottom line is that just now it looks a mess. Despite the council apparently having a strategy for the streetscape it doesn’t seem to have worked well in this case, does it. When I first saw photos online I thought the patching was just in one area, but there are blobby bits of black patching all the way along, as I realised when I walked along Stonegate yesterday.

Perhaps some warning might have helped, a council press release explaining what they’ve attempted to explain since. Seems odd that anyone could think that so many slabs could be removed and patched in such a central and important street without people noticing.

And, like I said, it brings back bad memories of the time the council’s paving work close to another much-loved York street brought us to the attention of the Daily Mail, and much angry and outraged tweeting followed, with councillors and council staff then having to deal with the flak. I remember spending much of that Friday evening writing this page about it — one of my most-visited.

Meanwhile, beyond the touristy bits, old stones and irreplaceable stable paviours are often lifted and lost, or covered with tarmac/asphalt, and barely anyone notices or cares. If someone started a petition or campaign to protect the hexagonal loveliness of some of the city’s back alleys I’d sign that, but as far as Stonegate goes, I’m sure the council will reinstate it all pretty sharpish, and no doubt spend a lot of money doing so.

In response to some queries and discussion on Twitter, I’ve done a bit more research.

According to Patrick Nuttgens in York: the continuing city Stonegate was paved in 1975, after being pedestrianised in 1971. As the book was first published in 1976 I guess we can assume that this date is accurate. (I have the later edition, 1989, which includes a photo of Stonegate with its slabs.)

If you’re interested in York’s paving, old and new, there are many pages on this site on the subject. See the related pages links below or try this link.

Lisa @YorkStories is the creator, administrator, and writer of content on www.yorkstories.co.uk. She can be contacted on this link or via Twitter, @YorkStories
View all posts by Lisa @YorkStories →
Tagged  paving, Stonegate
To link to this page's proper location please use the > permalink