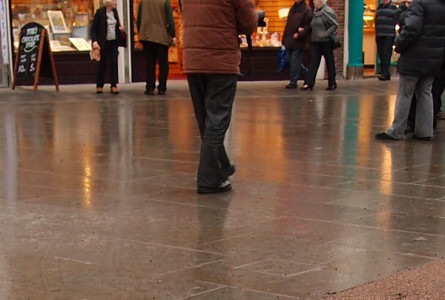 As I’m sure most people know by now, the new paving in King’s Square, phase 1 of it, has recently been revealed. I’ve already written about how it fitted in (or didn’t) from what I could see of the visible edges. Now the main area is also visible.

Photos and comments on social media and letters to the Press suggest that the reaction has been 99% negative.

I thought I’d try to find something positive to say.

The very smooth new surface reflects the light on a wet day, which is always a good thing. The reflection from the shop windows is rather pleasing. (It’s also fair to say that the paving they’ve taken up had similar light-reflecting qualities when wet, and maybe just needed a good clean, and repairing.)

It’s obviously natural stone, and it has been beautifully laid, with great attention to detail. I think we can agree on that? 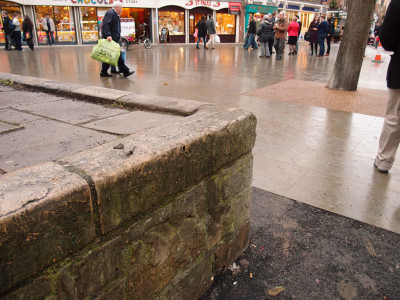 Photos on Twitter showed the tarmac patches near the raised area. Obviously a temporary finish, as this is where extra seating is going. They couldn’t leave a hole, as people would have complained, and it would have been dangerous. And they had to do the work in two phases so as not to disrupt Christmas trading. Work will resume early next year.

What struck me most was how it feels underfoot. I was distracted from looking at it, feeling it with my feet. It was like walking on glass. For a blind person, I imagine they’ll know they’ve arrived in King’s Square. Or think they’ve walked onto a mirror. 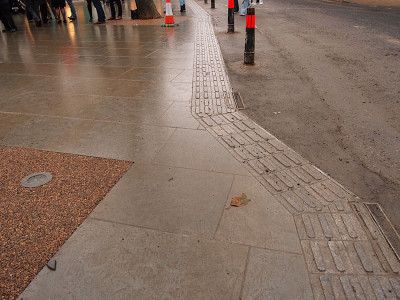 This textured edging is also elegant and visually pleasing, and more importantly, presumably useful if you’re blind or partially-sighted, as it indicates the roadway edge.

The main paved area certainly says ‘performance space’. If that’s what it’s saying then that’s good, as that’s what King’s Square is best known for.

Of course very smooth surfaces are also ideal for cafe tables. If that’s what this place is saying then that’s not inspiring at all, and just causes resentment.

Anyone who has followed events in the last year or two will know that the Chocolate Story attraction is keen to have outdoor seating in the square. Has City of York Council remodelled King’s Square for that? Reading online comments and talking to friends it’s clear that many people think so.

The planned programme of paving reinvigoration also seems to many like a shocking waste of money, particularly when essential services are being cut. But the ‘reinvigoration’ will continue, and is planned for other areas. It should perhaps have begun in one of those other areas rather than here. Then we would have been better equipped to know what the end result might look like when we were consulted on the plans for this square.

And of course we were consulted. I wonder how many people knew about that. Not enough, it seems. Many residents feel that they were never consulted, despite the best efforts of the council (and they did, I thought, make a real effort to consult).

But then, after consulting us, they ignored us (and English Heritage) on one particular aspect of the square. Let’s move across the mirror-like smoothness to that particularly controversial part. 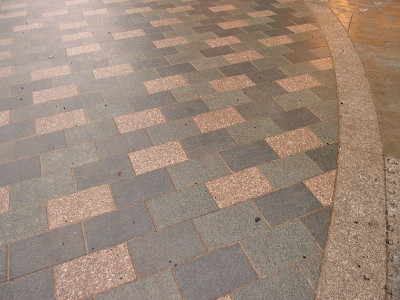 Replacement surface for the old cart tracks and setts

The replacement for those old cart tracks and setts.

Like I said before, nothing could look as good as that ‘1970s paving’ (laid in the 70s, probably 19th century stonework). But still. Look at it.

I doubt anyone in another forty years will campaign to save this.

I feared this would be nasty when I heard it was to be in three colours, but assumed at least that the blocks would follow the line of the curve in an aesthetically pleasing way. But no. We had a sinuous curve, laid to copy the Newgate paving it joins. Now we have a multi-coloured mess of setts in a weirdly busy pattern.

I’m not going to think about what multi-coloured horrors they’ve got planned for phase 2. 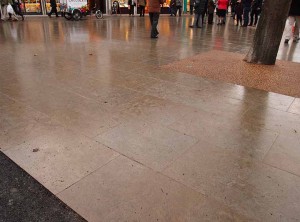 So, let’s run away from that bit and back over to here. Trying to be positive, wasn’t I. So, it’s not finished yet, there’s still a couple of hundred thousand pounds waiting in the kitty to do the rest of the paving and chop the mulberry tree down. Personally I’m more concerned about the imminent demise of a healthy city centre tree than I am about these slabs.

I think at least we can congratulate those who did the actual hard graft on the high standard of work. As anyone who has ever tried to lay paving knows, it’s really difficult. I’ve paved parts of our garden and despite my best efforts never managed to get it properly level.

But then my rather uneven and slightly sloping brick paths fit in well with all the other worn and slightly wonky bits around the back of our Victorian house. Depends I guess whether you want things to fit in or to make a statement.

This place certainly makes a statement. Chris Titley in YorkMix thinks it says ‘Welcome to Milton Keynes’. What does the new look say to you? Comments welcome.

There are many pages on this site on the subject of King’s Square. There’s also an album of photos of the square (about 70 in total) including views of how it used to look.

Note: The photos accompanying Chris Titley’s piece in York Mix show the paving on a dry day, when it looks totally different. Interesting to compare with my photos above.

Lisa @YorkStories is the creator, administrator, and writer of content on www.yorkstories.co.uk. She can be contacted on this link or via Twitter, @YorkStories
View all posts by Lisa @YorkStories →
Tagged  King's Square, paving, reinvigoration
To link to this page's proper location please use the > permalink