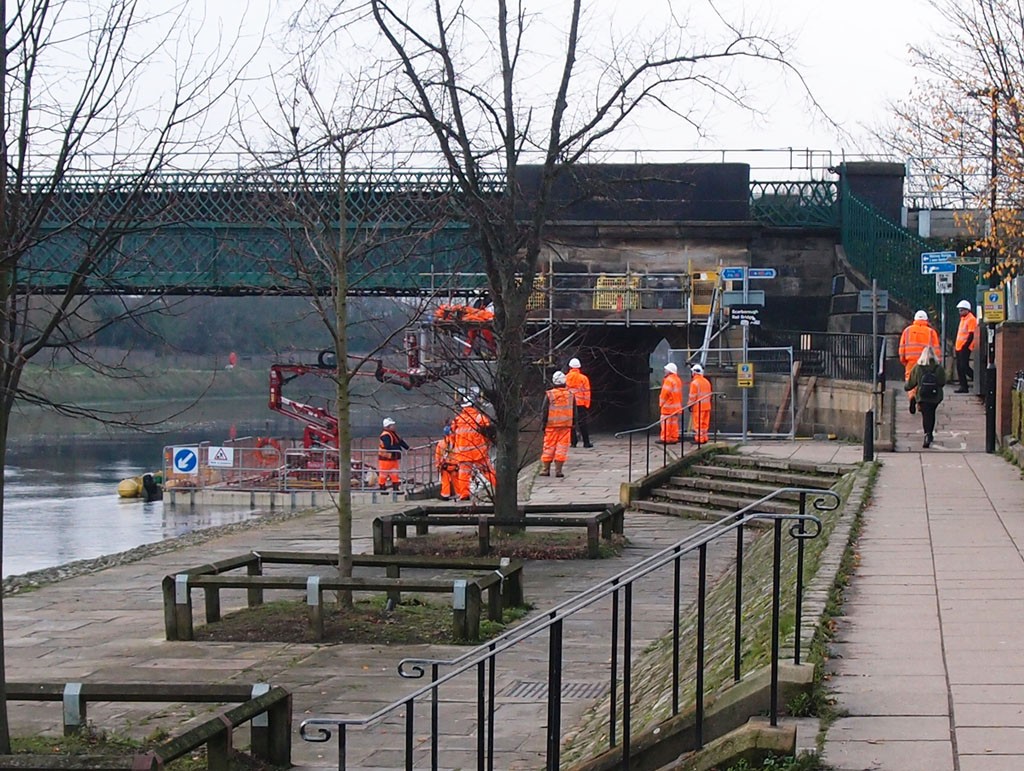 I know I’ve written about Scarborough Bridge before (a few times), but not since it officially opened, apart from a brief mention in Sunday’s wander. Looking through December photos from various years past I was reminded that on this day a mere one year ago I took the photo above, and wrote about how the long-awaited work had begun on the bridge.

A year on I wanted to include just a few photos and thoughts in recognition of the fact that the bridge is now officially open and in use, and that I’ve now been across it on foot and by bike.

Obviously there have been many photographs of the new bridge deck, on here and in many other places, highlighting its width compared to the older bridge, or showing its striking ironwork from the side, highlighting the differences from before. Also interesting though is how the bridge as a whole doesn’t look radically different from before when viewed from a bit more distance, and more head-on, rather than from the side, close-up. 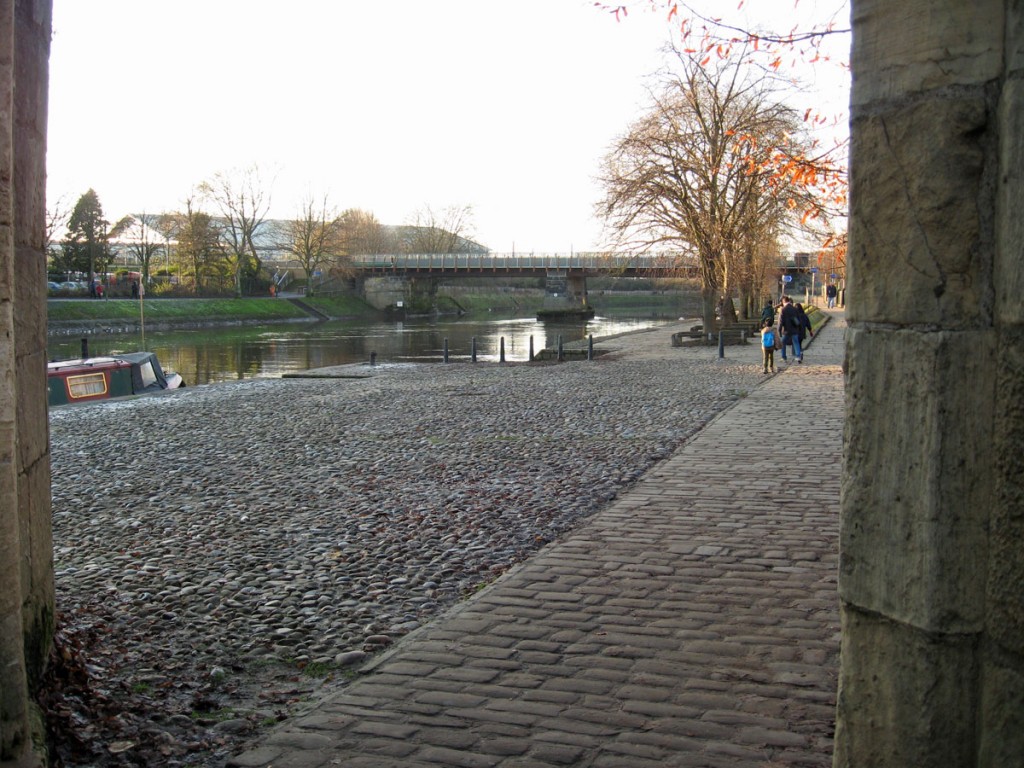 Scarborough Bridge from the riverside at the end of Marygate, 1 Dec 2019

This seems worth mentioning as I recall some concerns expressed that the new bridge deck might look jarring or intrusive when viewed from other viewpoints, such as Lendal Bridge. It doesn’t. The visible difference is that the large stone blocks that previously added height on both sides have been removed. That seems like no great loss, as they always looked black and grubby, and seemed a bit overbearing.

Though I looked at many documents and watched the work as it progressed, it was hard to picture, until we could actually use the bridge, how it would work together, the rail lines and pedestrian/cyclist part, in terms of different levels and proximity. It works like this: 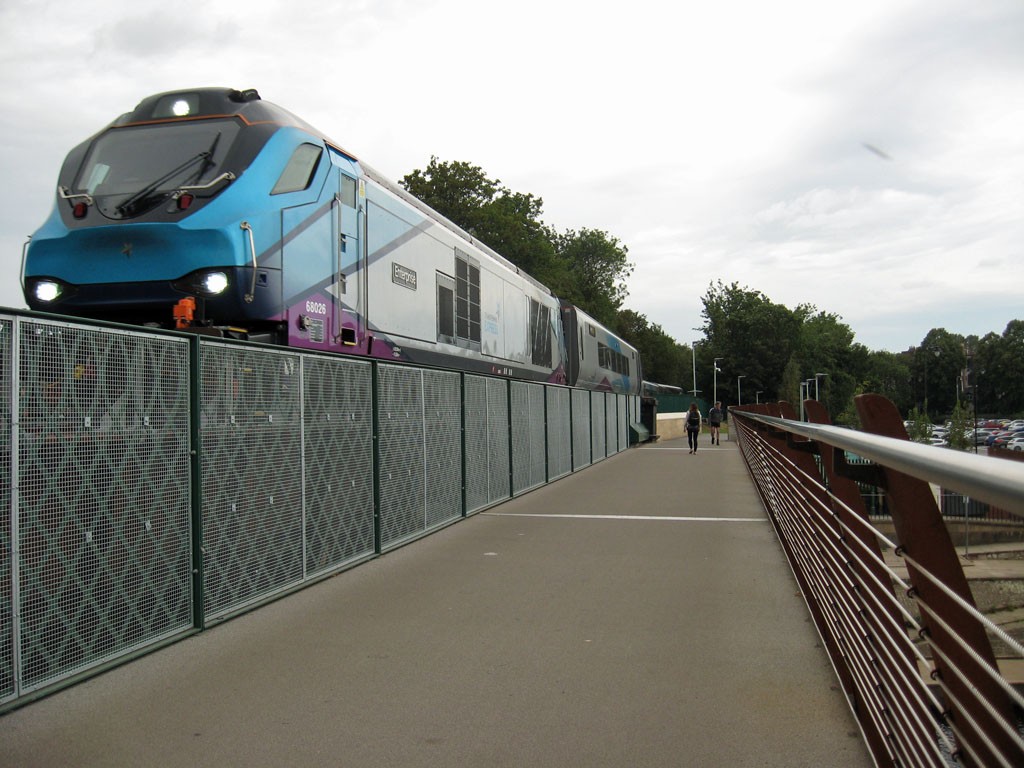 There’s a real sense of linkage to the station now. There clearly always was, if you were on a train, as it’s always been a bridge carrying railway lines into the station. But as a pedestrian that sense of linkage wasn’t apparent on the old bridge. As was mentioned earlier, but let’s remind ourselves.

On the old bridge: 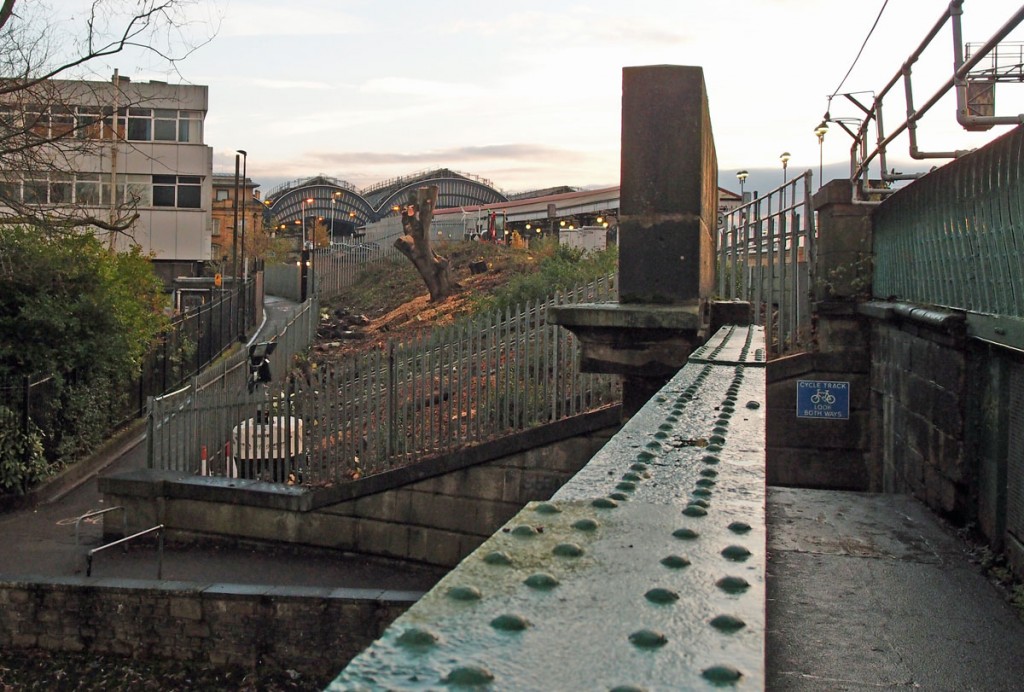 The pedestrian viewpoint from Scarborough Bridge (as it was), looking towards the station, 26 Nov 2018 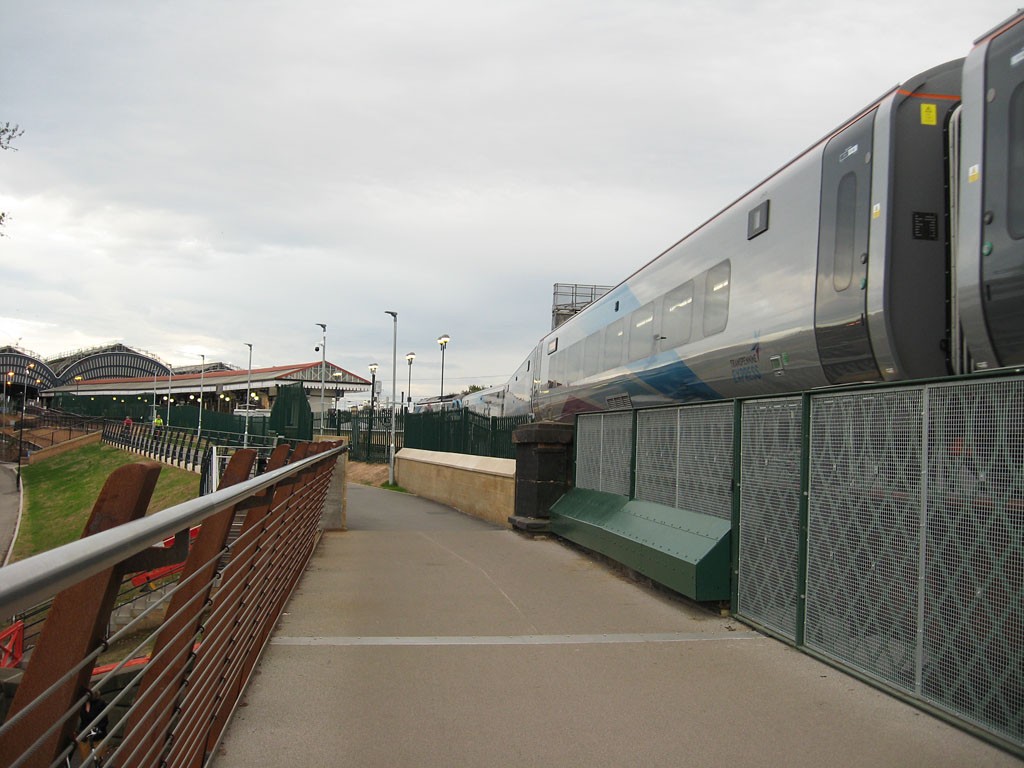 From the new Scarborough Bridge, looking towards the station, 30 Aug 2019

It’s so obvious it should be like this, and should have been like this a long time back.

In terms of the details, it has some nice metalwork, and paving. 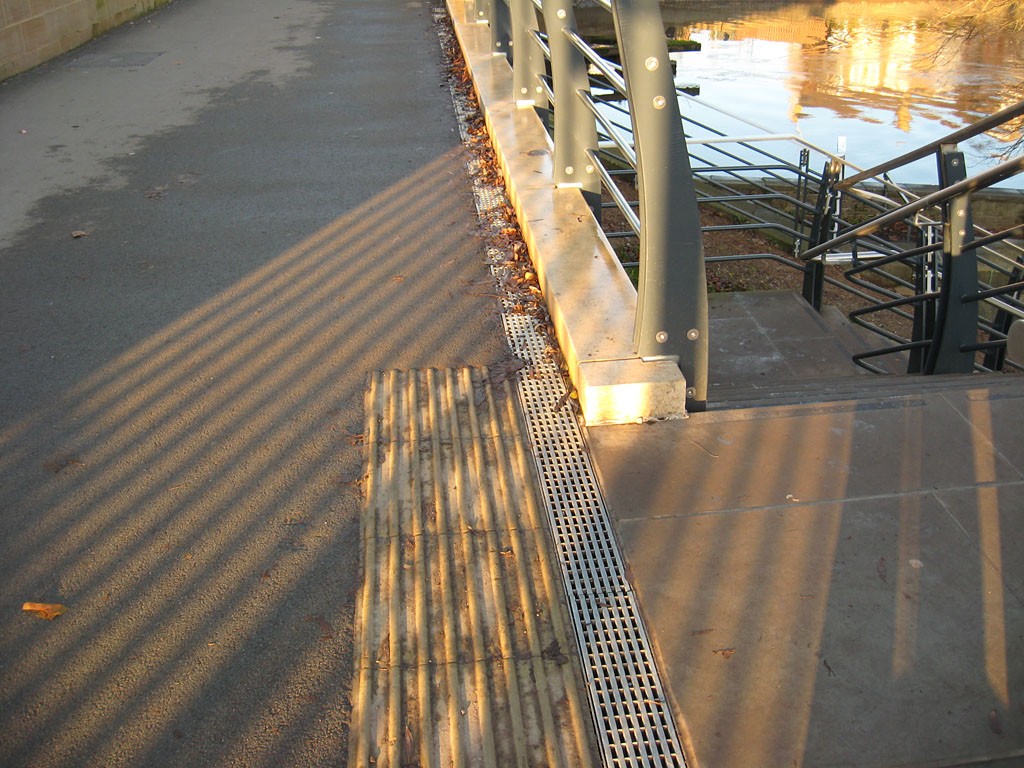 I have to mention that the slope to it, on the Marygate side, is rather different from the illustrations we were shown when the plans were approved, where there was a long straight slope starting quite some distance back, by the side of the car park. What there is, now the work has been completed, is a much shorter and steeper slope with quite a sharp bend onto the path by the car park. I assume there were good reasons for this change of plan, and I hope it isn’t causing problems between pedestrians and cyclists.

When the work was taking place I hoped we wouldn’t end up with any weird little bits of fenced-off land that might end up being littered with rubbish no one could get to to clear, (as was the case before, particularly by the sorting office, and is the case by the footbridge at the end of Bridge Lane). One such space seems to have been created on the Marygate side of the bridge … 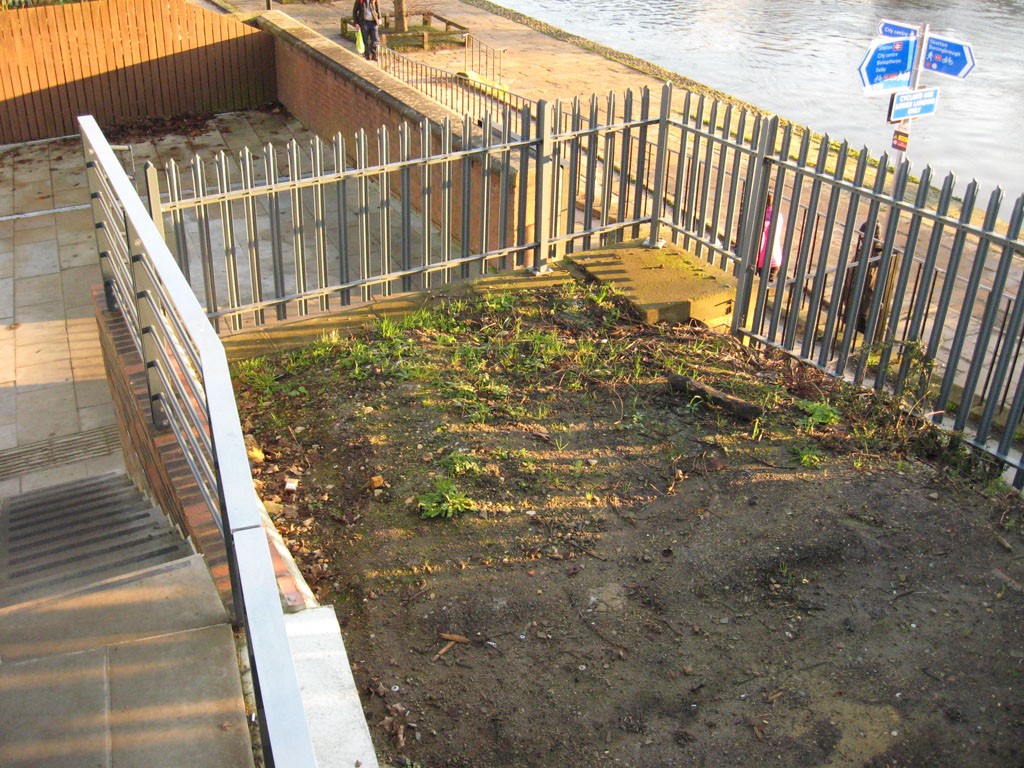 Fenced off bit by Scarborough Bridge

As there are plans to alter the flood defences here perhaps this weird little bit of no-man’s land/litter collecting area is only temporary. I hope.

The earthy/grassed areas around the new impressive bridge look a bit rubbish. I’m not sure if there’s been some attempt to provide planting that is beneficial to bees/wildlife/humans, and that it just hasn’t got established yet. If it isn’t cared for and managed then no doubt the ubiquitous buddleia will drift down from the railway line and we’ll just have another load of that. Another waste of a bit of land. Instead I’m thinking of things we can eat, or at least make herbal tea from. More on that story later.

Anyway, hurrah for Scarborough Bridge, carrying the line that connected my railway ancestors to York to in the 19th century, and is a bridge now — at last — fit for the 21st century. 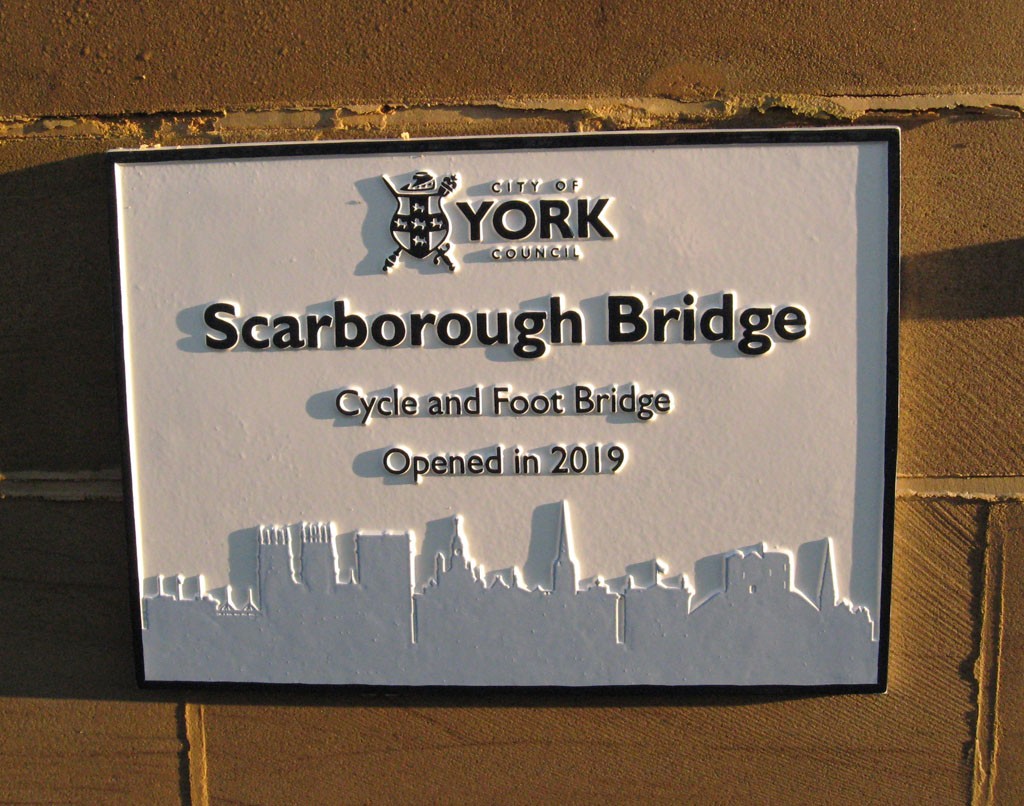