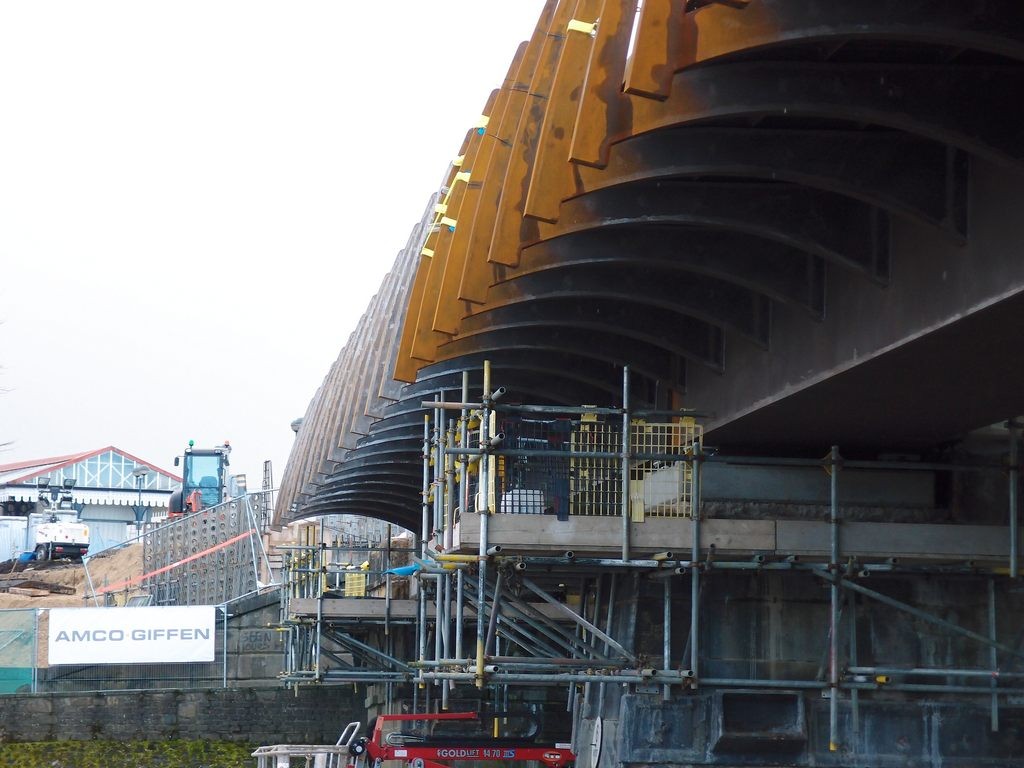 After the previous page, a difficult subject to consider and try to cover, it’s very cheering to be able to return to the subject of the Scarborough Bridge upgrade, with photos taken recently.

When I wrote about this project previously, work had started to clear the ground, giving a clear view into the railway station. Now, as pictured above, we have the new structure in place, soon to connect to the station and to ramps on the Marygate side, all lifted above flood level.

There was a bit of a delay on the installation, but I hoped that if I headed up there this Sunday (10th) then both halves of it might be in place. As indeed they were, and I wasn’t the only person stopping to have a look. This bridge improvement has been recognised as essential, by so many people, for so long. 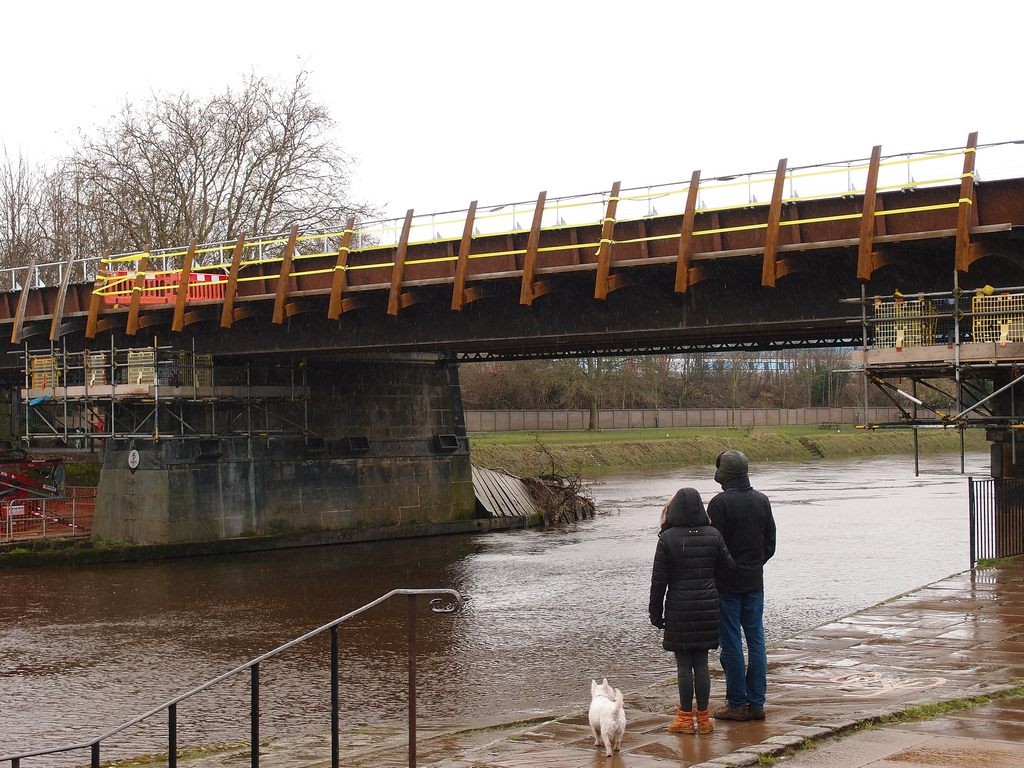 The weather was rather grim and wet and dull, at this point. If I’m going to do justice to a thing like this photographically I like it to be illuminated by the sun. When the sun came out later in the day I thought I’d try again. It’s quicker by bike, so despite the freezing cold wind blowing into my ears as I cycled down Queen Anne’s Road I heroically continued on, and crossed Lendal Bridge and came back down the riverside to get some more and sunnier views from that side of the river. Just for you, dear reader. 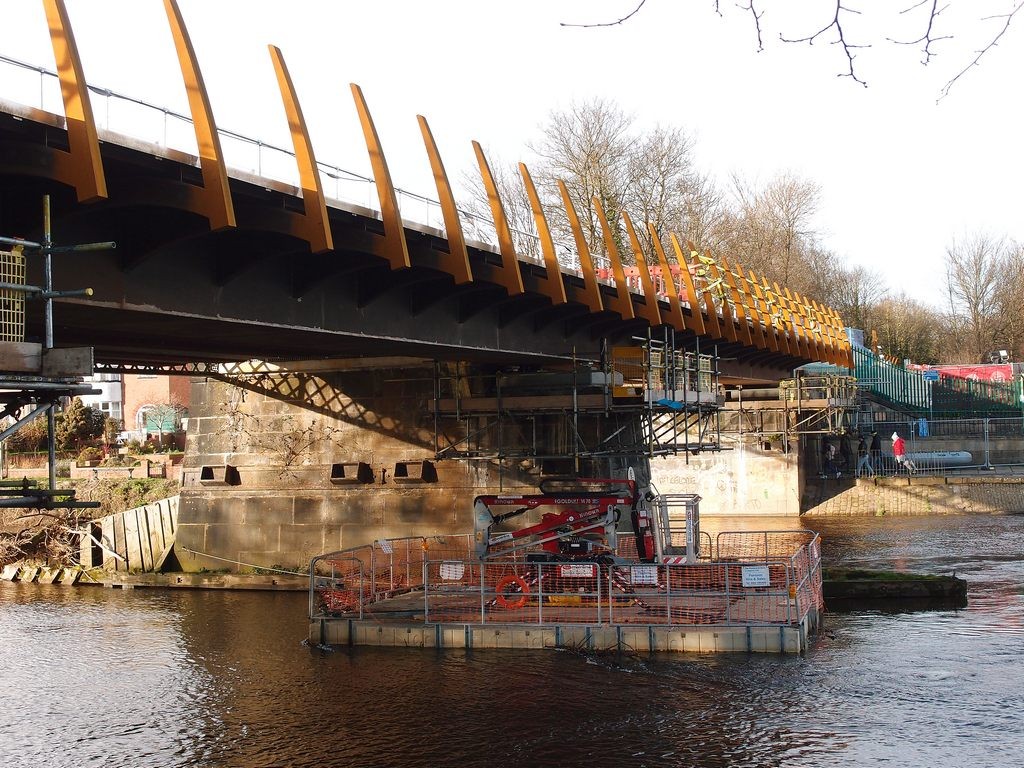 Scarborough Bridge, from the riverbank by the sorting office, 10 March 2019 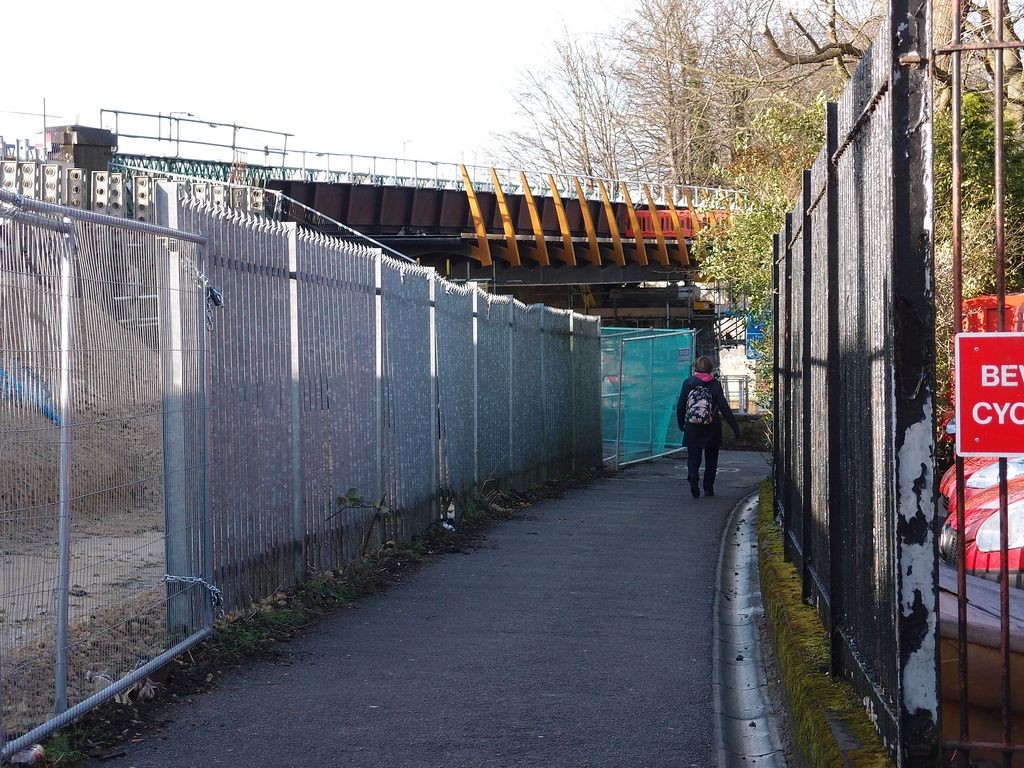 Scarborough Bridge, from the lane by the sorting office, 10 March 2019

And then up the ramps, getting closer to the level of the new bridge deck. 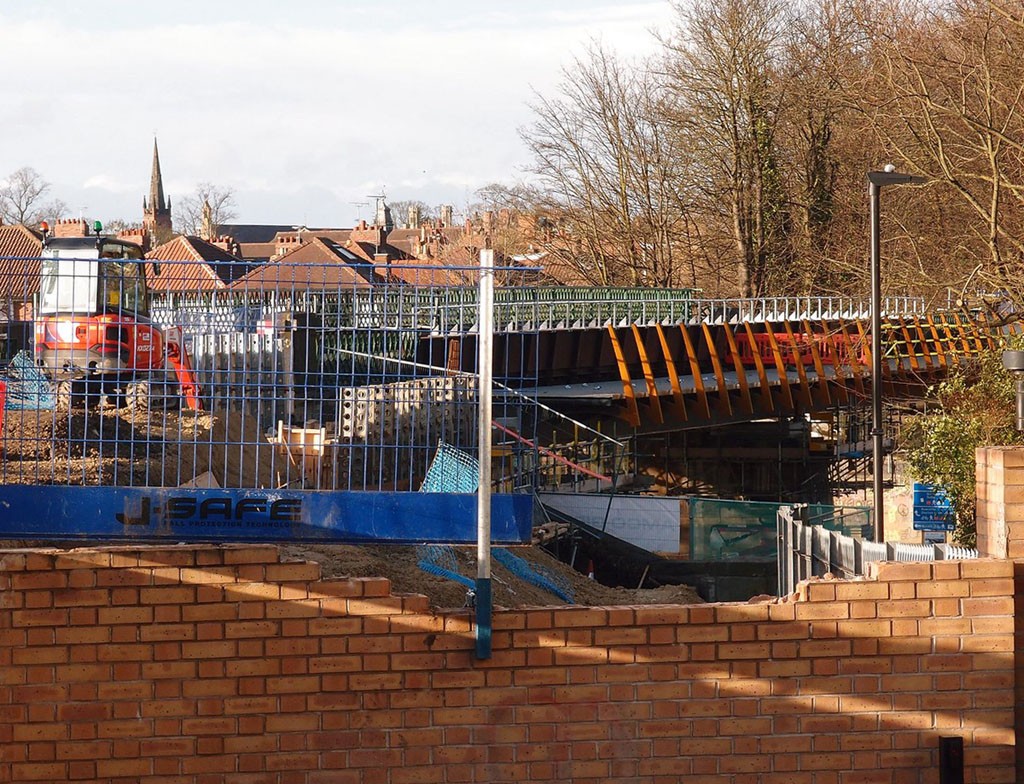 Soon to be connected up …

And then on the level of it, peering through the fencing and mesh, seeing the level built up here to meet the new bridge deck. 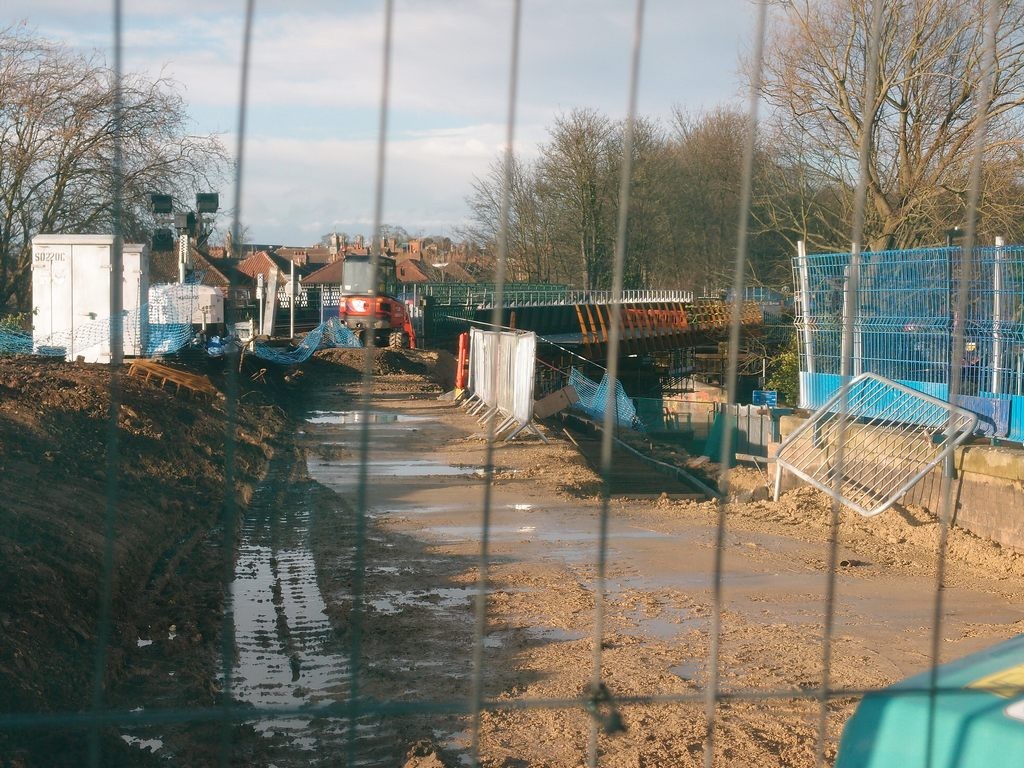 Groundworks on the station side, towards Scarborough Bridge, 10 March 2019 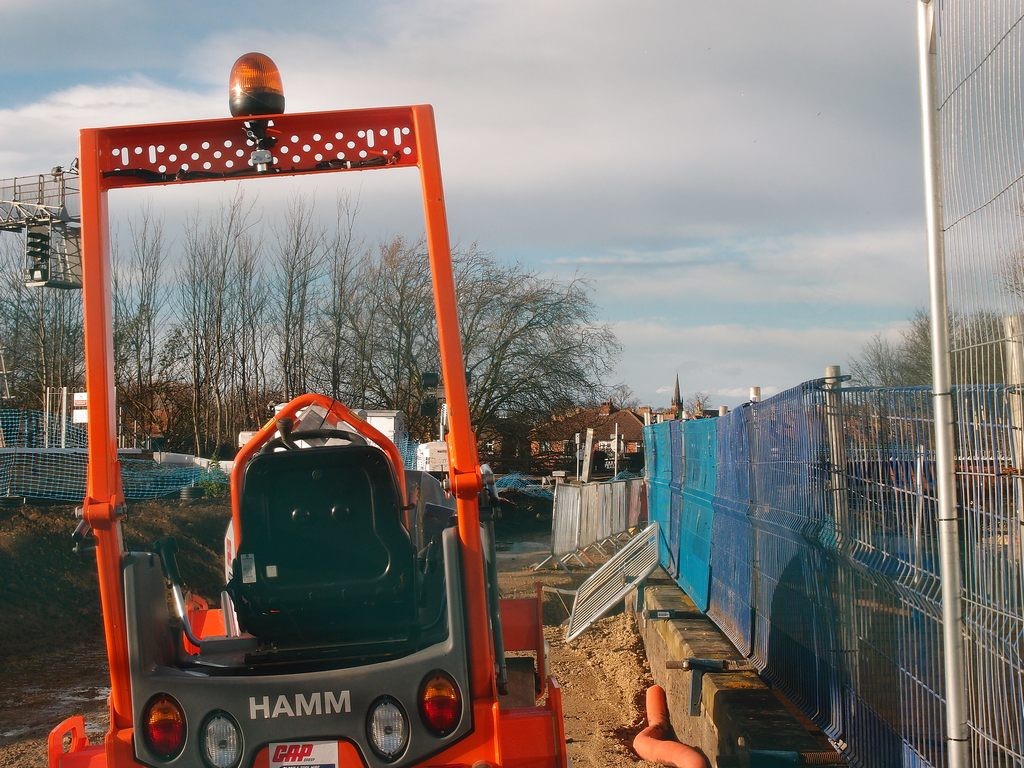 All good to see. A river crossing eagerly awaited by many people.

When the first part of the new bridge deck was supposed to be in, it wasn’t, and on that particular Sunday afternoon I was one of a group of slightly disappointed people standing by the bridge discussing its absence.

When it did appear later I saw it first via images on social media, and it looked really narrow and small, and I was a bit concerned. (It brought to mind the Stonehenge bit in Spinal Tap.)

A relief then later to revisit the bridge and stand under it and realise that the curved parts of the structure (most obvious on the photos I’d seen) are only part of its width, and that the full width of it is more obvious when looking up from underneath, when it’s clear that there’s another part to it, more box-like. 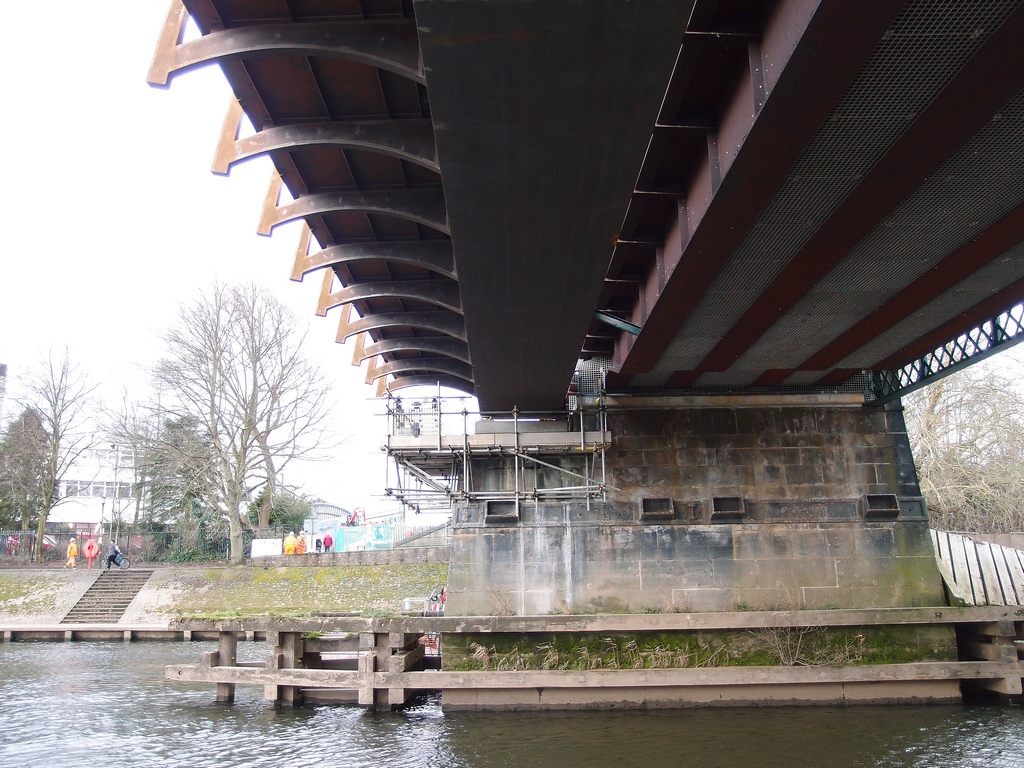 Also down here under the bridge, reminders of the work of previous generations, a detail I hadn’t noticed before. 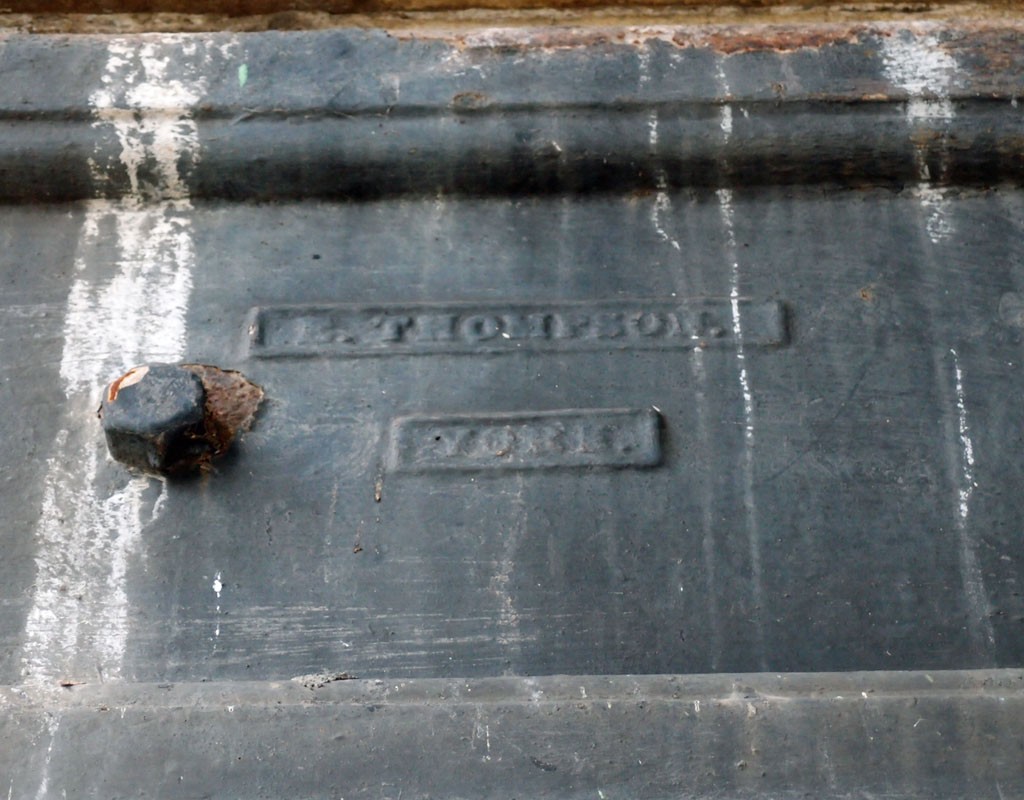 Part of the long history of this river crossing, with its decks replaced and its heights adjusted, over time.

The City of York Council page on the Scarborough Bridge project has recently been updated, giving an opening date in early April. A bit later than originally advertised, as anyone who has been following this project with interest would have expected.

Quite a bit of work to do still, and I hope that the boards around the site will give some updated information. The representation of the progress of the work, in local media, from press releases, has been a bit confusing, which is one of the reasons I thought an update was necessary here on these pages.

Good to see something being built that will benefit the city’s residents, amid so many developments that I find it difficult to feel happy about. In the midst of all the destruction and mess …. building bridges … a good thing.

www.yorkstories.co.uk has been online for quite a while. It’s a resident’s record of York and its changes, a personal perspective on the city of York, UK. It has changed over the years, inevitably, but in general it tends to try to fill in the gaps, covering things not covered in local media, or looking at them in a different way. There are fewer ‘gaps’ to fill these days than there were in 2004, so I’m not adding to it so often, but it’s still a one-person effort, an independent resource, that in recent times has been supported by your virtual coffees. Thank you.