As previously mentioned, a major local happening in our built environment has been the replacement of the rail bridge known as Scarborough Bridge. Some weeks ago, in mid-February, I went along to see the removal of one of the old bridge decks, and a few days ago went to check out the new ones.

16 February was a rather gloomy day, as these photos show, so apologies for the grainy quality, but this was a really impressive sight, as a massive — and I mean massive — crane swung into action. It was a slow process, carefully done. 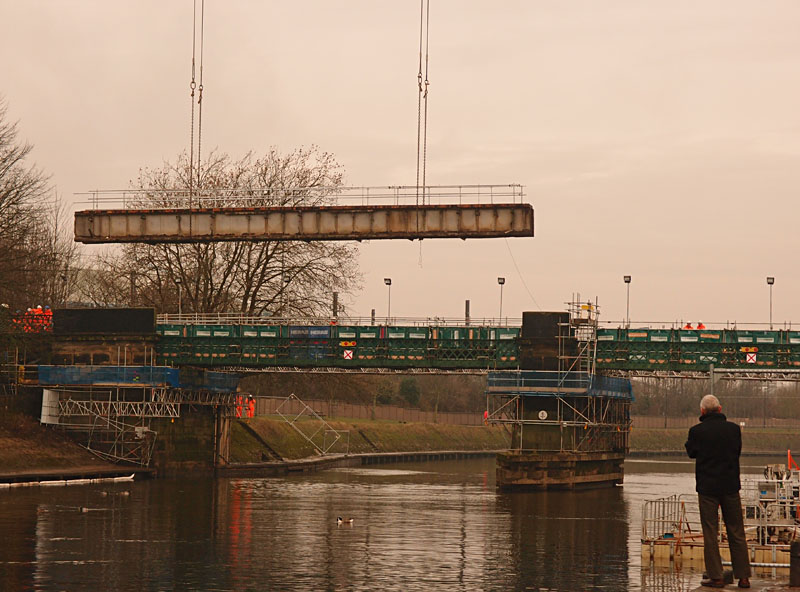 There were quite a few of us gathered by the river to watch this old bridge deck being lifted out. Imagine how many trains have trundled across it, crossing the Ouse, over the years.

I’ve a fondness for the Scarborough line, not only because it goes through my patch of the Bootham/Clifton area and sometimes brings us steam locomotives, but because this was the line my railwaymen ancestors helped maintain, way back at its beginnings in the 1840s — a bit further out, in the Rillington and Knapton area, where they worked as platelayers and lived in cottages right next to the line. Eventually my great-grandfather, a porter on the railway, ended up here in York working at the station this bridge leads into.

A more symmetrical view next, from Lendal Bridge, from a friend who also wanted to see this impressive local happening. (One of the little figures standing by the water tower at Marygate Landing is probably me, taking that photo above. ) 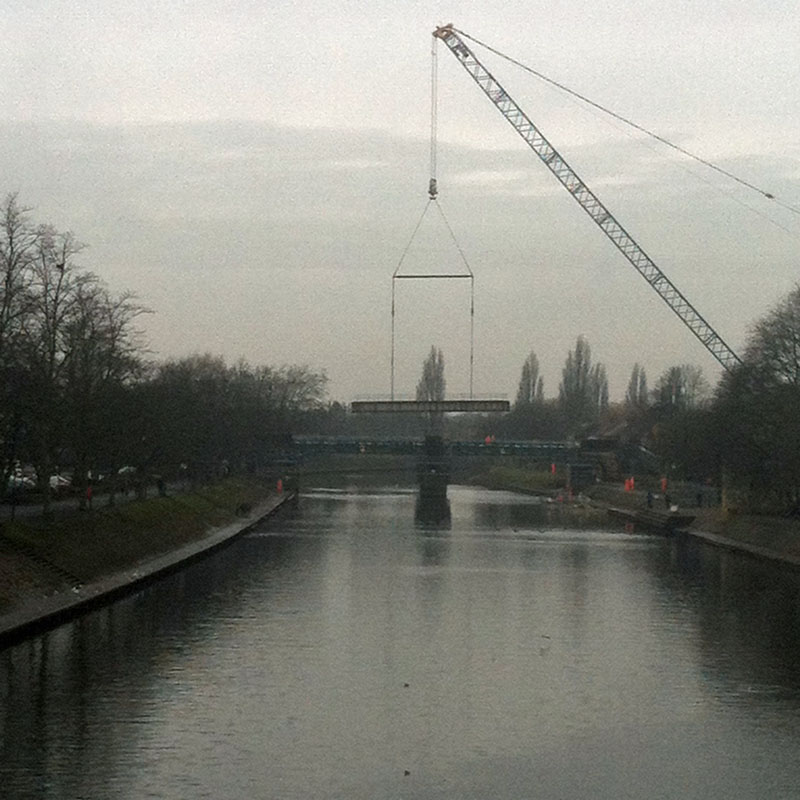 I had a wander round the back of the riverside houses to where the enormous crane was doing its thing. I’d already been to see this impressive piece of machinery when it appeared in the car park, and stood there gawping at the vast size of the thing.

I’m sure there have been plenty of photos and videos of this crane-related action, and with that in mind I thought I’d pop off to Sainsbury’s and come back when things had progressed a bit. The procedure was rather slow, understandably. Bridge decks aren’t the kind of thing you can just fling around. 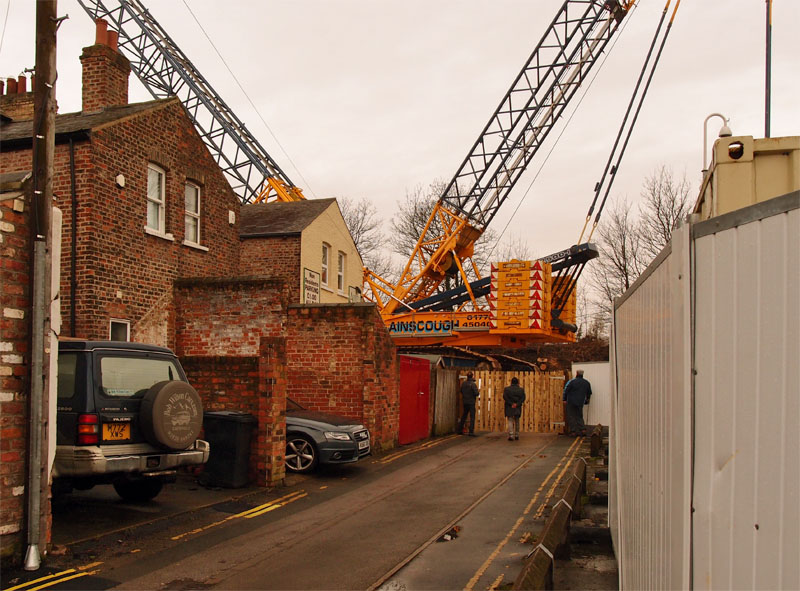 When I returned, the old rusty thing was on its way to being lowered down into Marygate car park, where many people were watching, including Network Rail staff who appeared to find this as interesting as we the public did, suggesting that swinging bits of old bridge about in the middle of built-up urban areas in a tight space isn’t something they do every day. 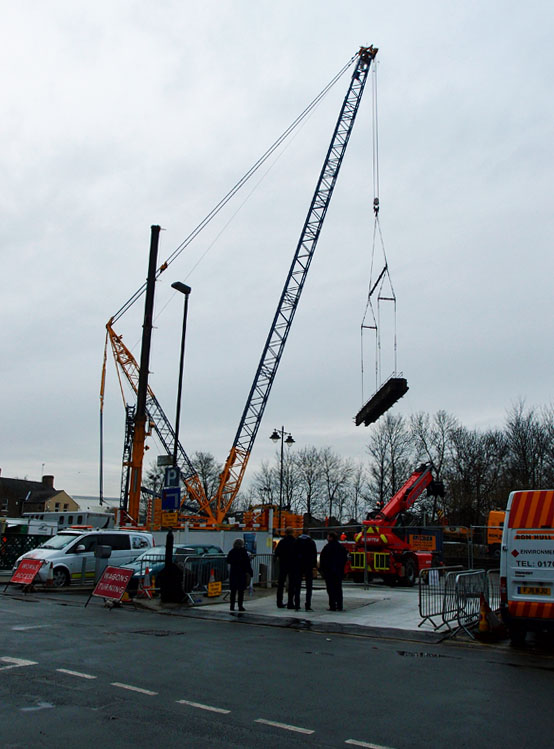 Old graffiti decorating its rusty old bulk became more obvious as it was slowly lowered into its temporary resting place in the car park. 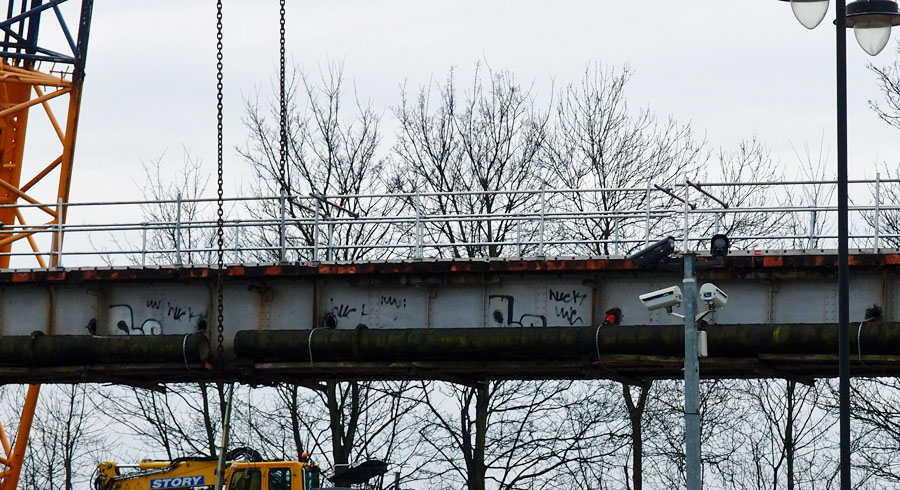 I headed off home, up the steps at the bottom of St Mary’s, where there’s a convenient change of level allowing a good view across the car park area, closed to the public during the bridge work and full of activity and vehicles of a type not normally seen down here. 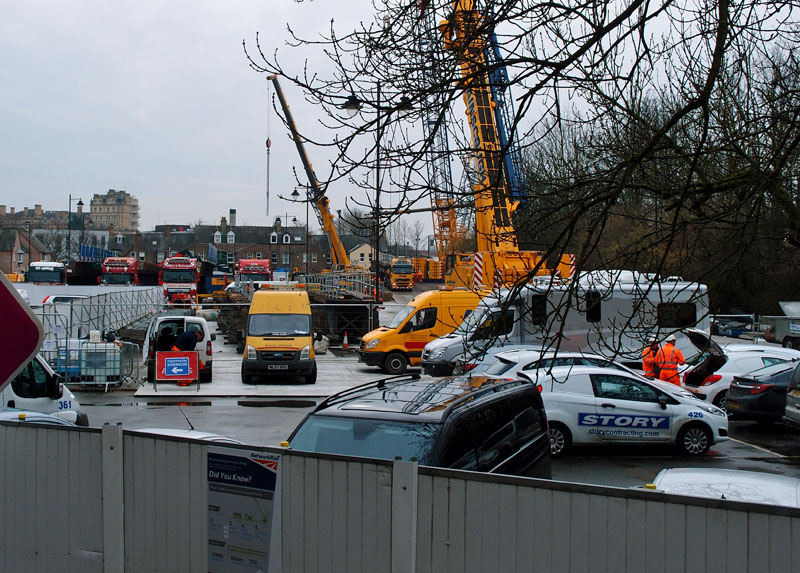 A more recent view taken on a much brighter day, of the newly refurbished bridge: 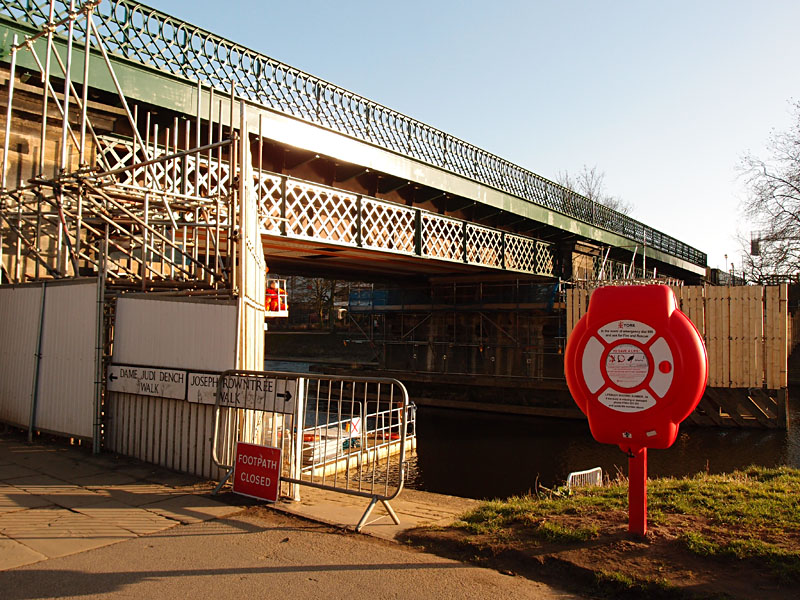 Work continues, but it’s all open again, with trains running and the riverside walkways open as normal. 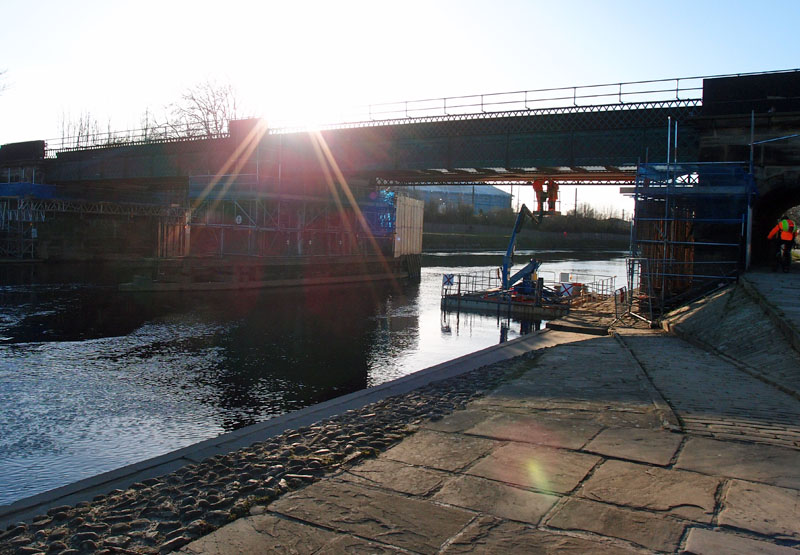 To the pedestrian it all looks very much the same. The love-locks are still in place on the steel mesh alongside the footbridge part. 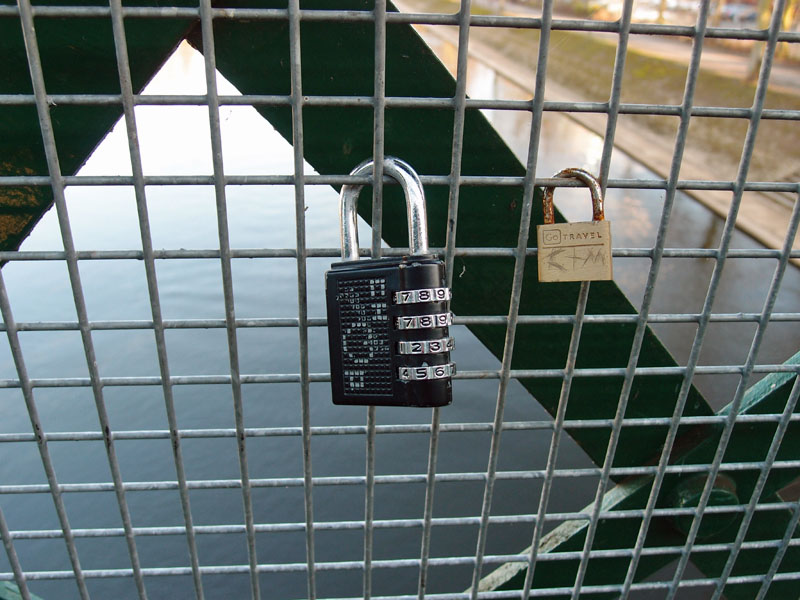 The combination lock rather than a key operated one is probably a good idea, as perhaps in a couple of years the lovers will want to come back and remove their lock. Because it looks likely that at last, in the next few years, we may have a new and more accessible footbridge alongside those shiny new railway decks.

As previously discussed on the earlier page the pedestrian part isn’t Network Rail’s responsibility, it’s up to City of York Council to replace and maintain it. In recent weeks the council has announced that funding will be available to improve this part of the bridge.

Improved access is definitely overdue here. It would make our old Scarborough Bridge, originally constructed in the 19th century, fully fit for the 21st century for cyclists, wheelchair users and pedestrians.

As it is now for trains:

Great to see the trains running on schedule after an early completion #scarboroughbridge @networkrailPR pic.twitter.com/e48AQNAw0L