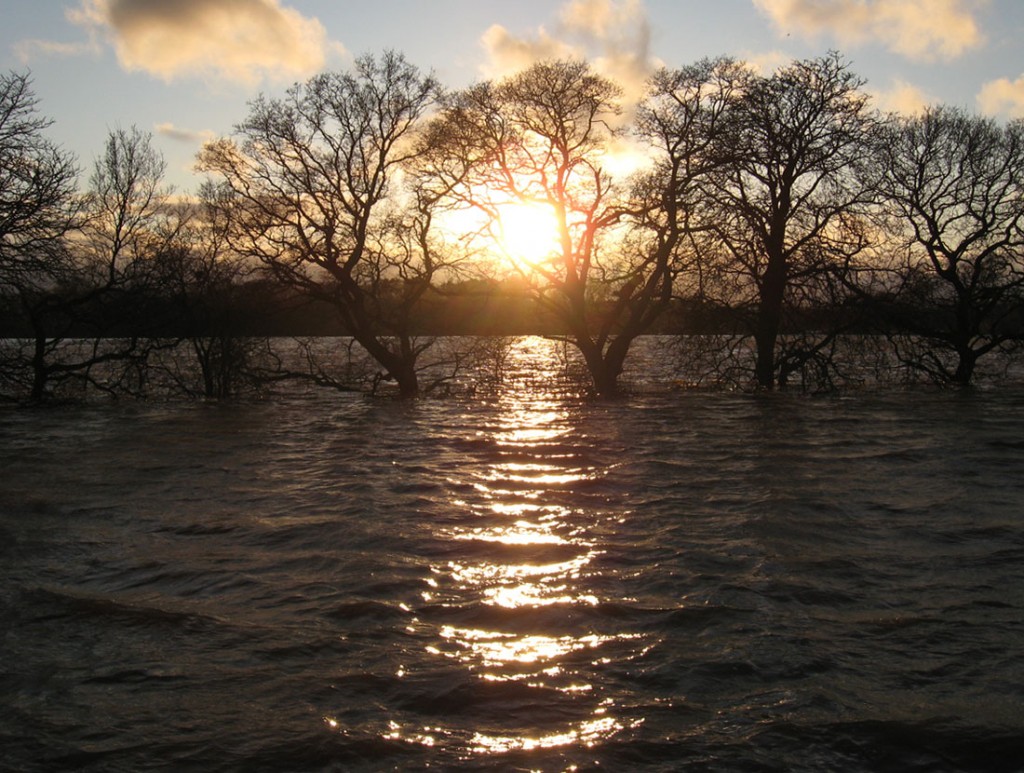 Sunset across the Ouse and flooded Clifton ings, Feb 2020

As the year of 2020 draws to a close, I thought I’d bring together a few thoughts/observations. Not my traditional ‘review of the year in pictures’. Partly because this year has been particularly strange, and partly because I don’t have enough photos.

Earlier this year, in February, I walked along a flood bank not far from an overflowing Ouse. By the side of the large ings area in Clifton, where I’ve lived for so many years. I’ve witnessed so many floods, and yet still felt very aware of the energy and power of that massive volume of water from the Ouse, oozing out so far beyond its conventional boundaries. Generally I’ve observed the flood waters from Clifton Bridge or nearby, or in the city centre, but here, a short way upstream, it was still quite a shock to see/hear the movement of it, all this water coming down, lapping the floodbanks, moving, noisy.

On Rawcliffe Meadows I looked at elements of the local landscape I’ve grown to know and love and thought about how the Environment Agency’s flood defence work in this area would remove them, and how perhaps I might not want to walk up here for quite a long time while that was happening, and after it had happened, all that gouging out and filling in. 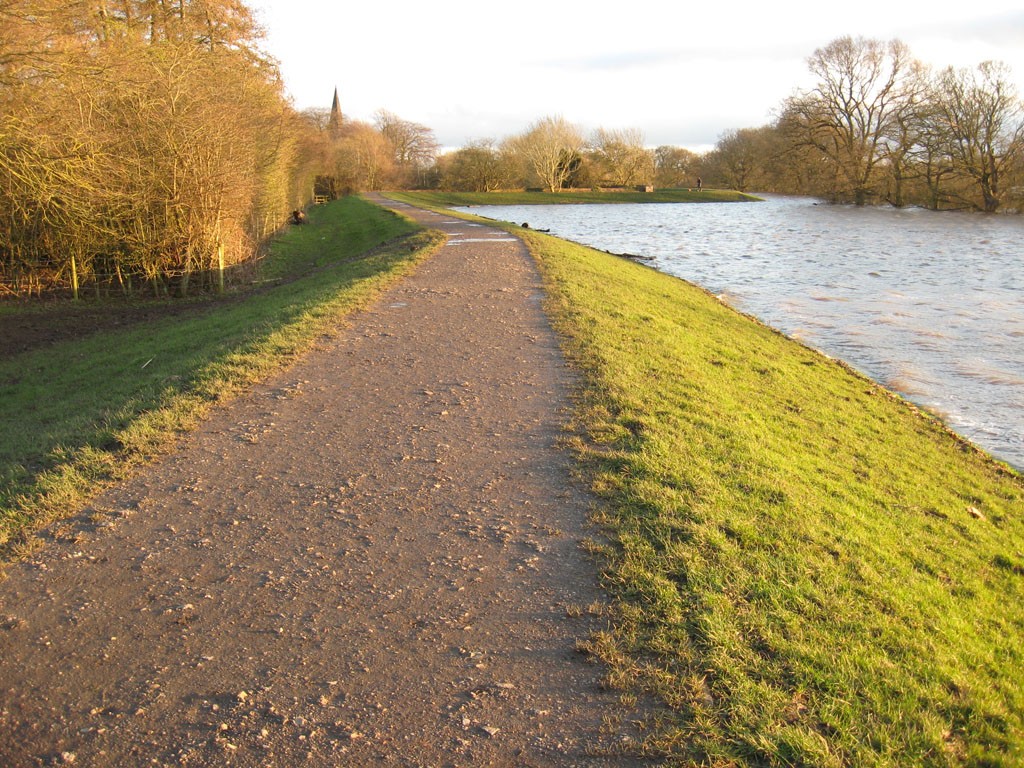 I walked back along the top of the floodbank as quickly as I could, as it felt like the water coming in from upstream would perhaps reach the top before I got to the gate giving access to the dry side.

It felt like these ings of ours were taking in too much. And that perhaps (probably) it was to do with the cumulative effects of things happening on higher ground, upstream.

But also in February, in the floods, I appreciated, again, one of the city’s major enhancements of recent years.

Scarborough Bridge – so close to the station, so important – used to be out of action anytime there were flood waters on the riverside paths leading up to its steps. Which was quite often. 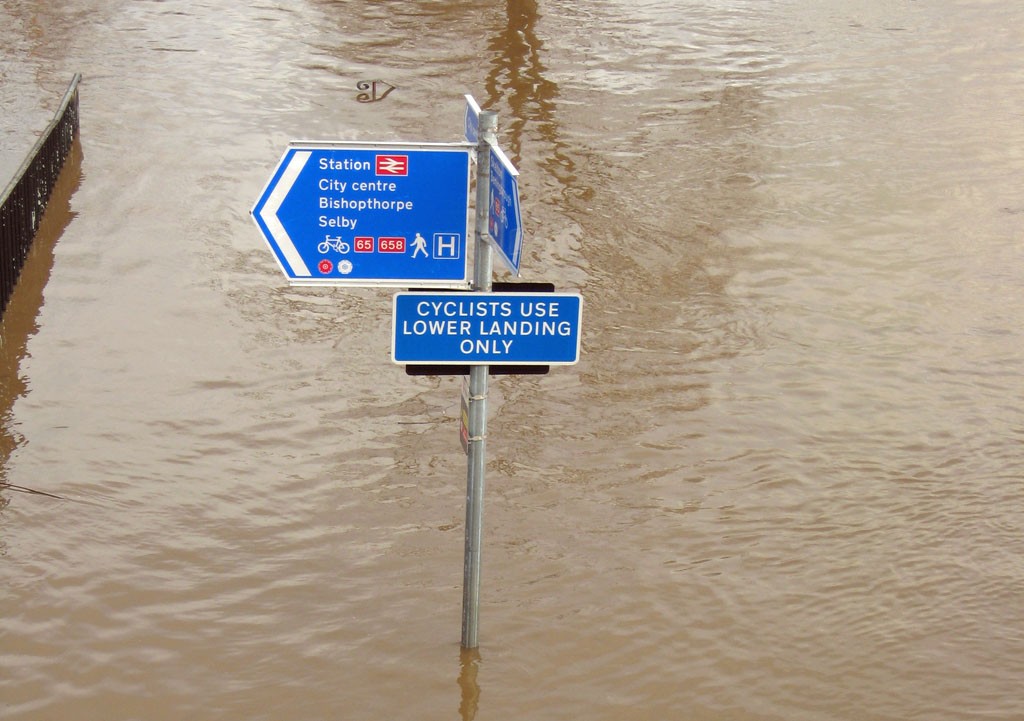 Not these days. What a massive change it has made, that Scarborough Bridge is now accessible even when the riverside paths are under the flood water. 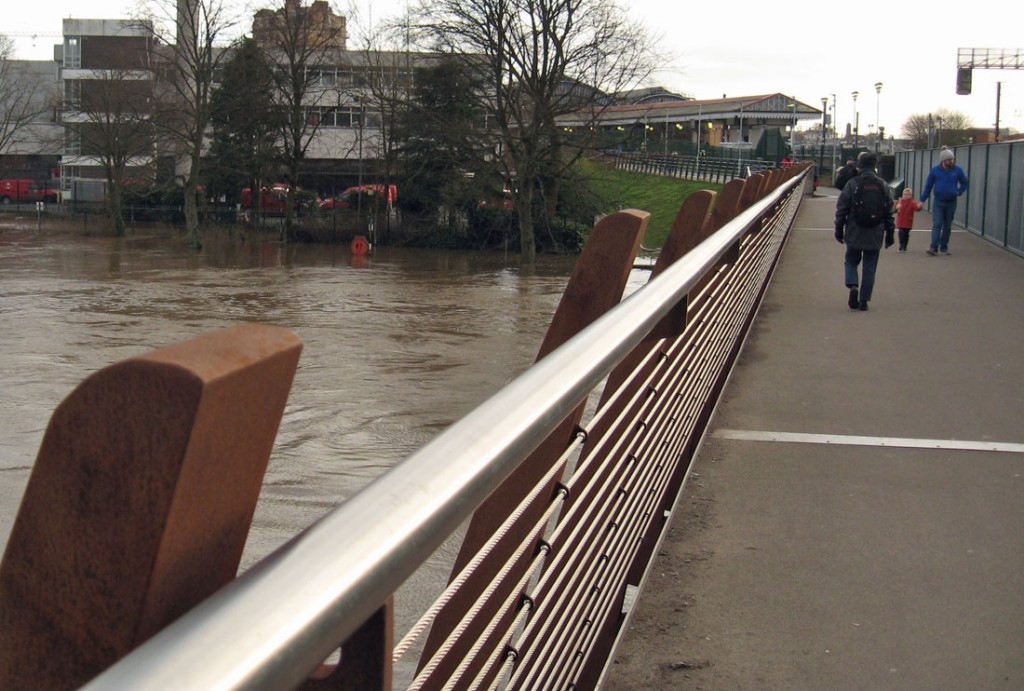 On Scarborough Bridge, above the flooded Ouse, Feb 2020

I’ve mentioned it a few times before, this important river crossing, but make no apologies for mentioning it again. It should have been improved so long ago, and took so much work and skill and time to do, so important to remember to recognise this. Just one blessing to count, in a year when it was particularly important to count our blessings.

Then, not long after the floods – which are of course a regular occurrence – came something not ‘regular’ at all, something unprecedented.

It’s easy to forget, with everything that has happened since, that the media, back then, reported the first UK coronavirus cases being discovered here in York, at the beginning of February. For a time that didn’t seem to have a huge impact, with the City of York Council leader saying that York was still “open to residents and visitors from all over the world.”

Then, of course, a dramatic change, in late March. I still have on my phone the text sent out by the government, which I’ve just looked at again, and still find it as chilling as I did then.

‘GOV.UK CORONAVIRUS ALERT
New rules are in force now: you must stay at home.’

We were of course advised to get some exercise and fresh air, and thankfully, by the springtime, the cow parsley was flowering exuberantly all over, just as it always does. 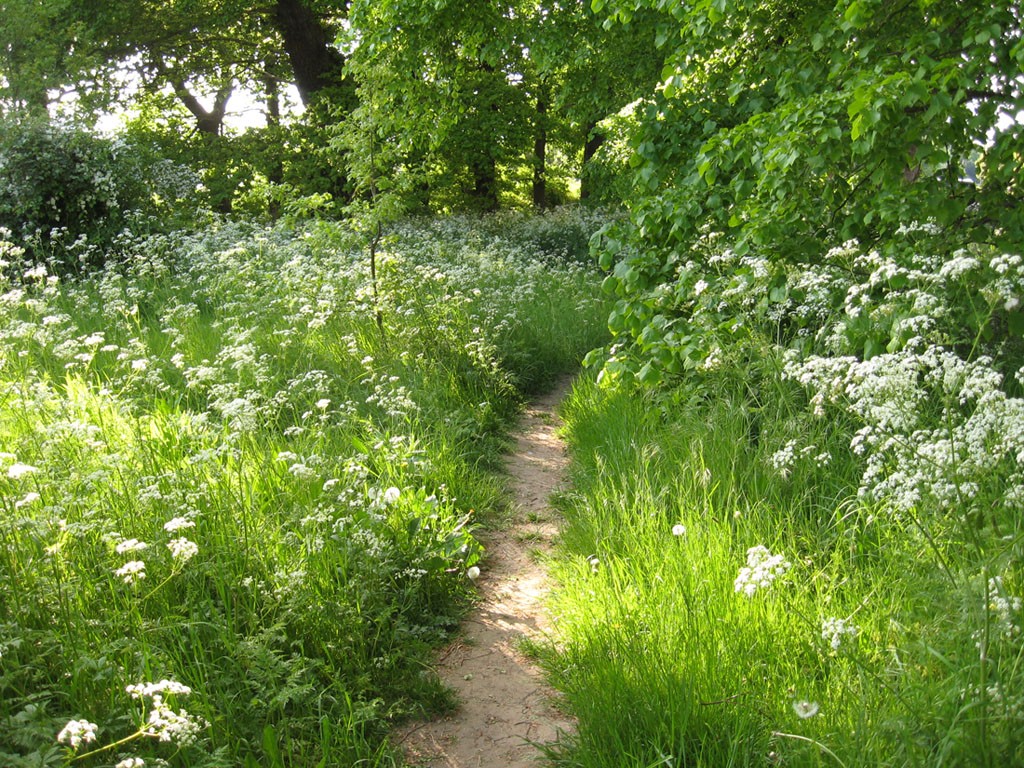 And children were making cheerful rainbows for front windows. And chalking on pavements. As Ben did, on Burton Stone Lane. 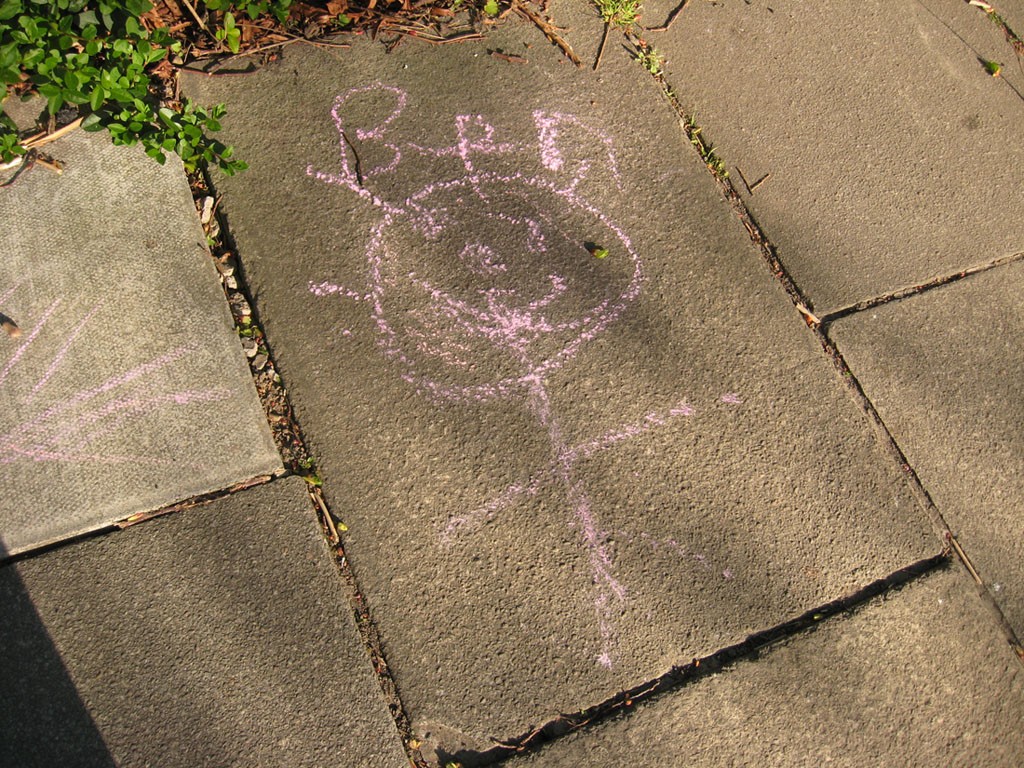 I didn’t feel like writing, and even when I did, didn’t manage to finish any piece of writing to a state where I could publish it online.

I concentrated on growing veg, and learning more about edible plants, and herbs, and spent as much time as possible in my own back garden, or walking through the local streets, looking at the drawings of rainbows in people’s windows, and thinking about how much land that could be growing food isn’t being used for that purpose, and how interesting and useful it would be if it was used that way. More on that story later perhaps.

I read a lot online, about the pandemic, about its effects, both locally and nationally, and beyond, but with my main focus being here, York, where some things still carried on as normal. Planning applications still went through the system, including the application to build housing on the football ground at Bootham Crescent, which was approved by the planning committee. An application for the adjacent Duncombe Barracks site was submitted in recent months. There’s a nice display of information about it on the boundary of the site, on Burton Stone Lane. 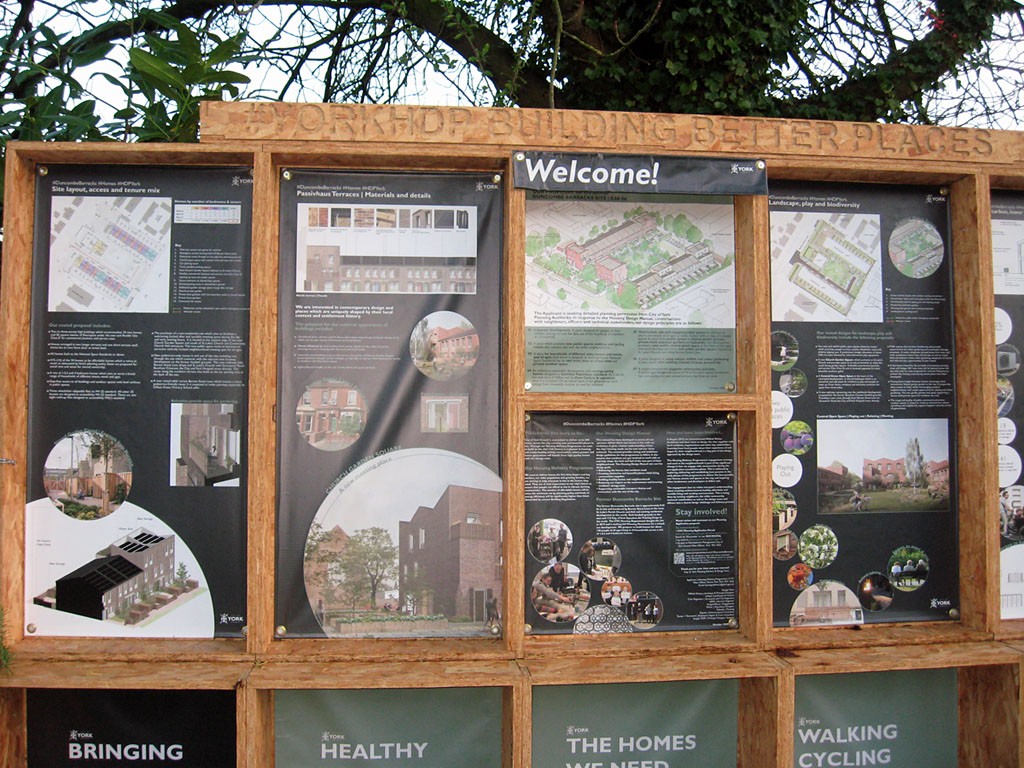 Information boards, on the plans for housing on the Duncombe Barracks site, Dec 2020

This looks like an interesting and thoughtful proposal for local housing, and reading about it on the display boards cheered me up, made me feel hopeful.

Another cheering thing, earlier this month, was a brief visit to Parliament Street. It had its Christmas lights and carousel, but wasn’t covered with the sheds for the Christmas market, and the “festive queuing and shuffling” (as the Press memorably described it, last December). 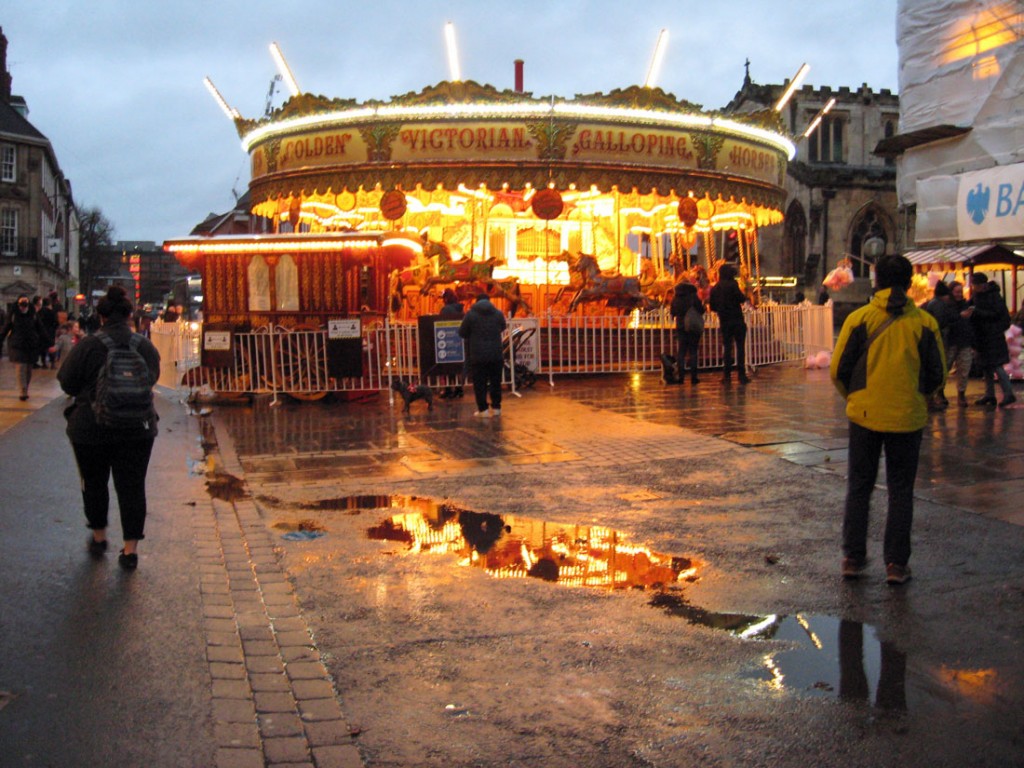 I noticed a very pleasant atmosphere as I crossed the area to go to the bank. A bit of music, some food available, enough people around for it to feel cheery, but so different from the hectic bustle we’ve become accustomed to in recent years. Something I wrote about in December last year, wondering if we’d reached ‘overtourism‘.

This year, of course – particularly the first ‘lockdown’ – brought a pause in that growth of tourism. There had been many complaints in recent years about the growing number of stag and hen parties, now paused by the pandemic. Too many tourists in general? Not any more.

Also in December last year I wrote about Coney Street, and how it was clearly reflecting changes in shopping habits, with so many empty shops, and those stores that seemed too large for the 21st century. It seems that this year has seen the end of several larger chains.

It has been interesting to see more focus on the local networks of people helping each other, more small local businesses being able to deliver what people needed, quickly.

I’ve wondered for some time now how much of what we think of as ‘our city’ is owned by those who care about York in particular, how much of it by the more distant investment/pension companies, etc. Much of the future of the city would be guided by who owns its various properties, its various parcels of land, and what they want to use those properties, that land, for.

It was very interesting to read, this week, an article in the Press which may have slipped under the radar a bit with everything else that’s going on. City will evolve after pandemic reports that “a number of city centre properties – often large vacant shops – have been sold off by pension fund owners and bought by local developers.”

“In York we are seeing the days of generic high streets and buildings owned by remote multi billion pound funds is dying. We have seen a big movement this year of properties moving into the investment of local investors who have the interest and the passion to see the city thrive.”

A fairly positive note to end this on, I think.

I hope we all managed to find some brightness in this rather dark and difficult year.

I’ve seen so many people in online comments being so quick to judge others, for different approaches to the situation we’ve found ourselves in. I feel bad for young people, and hope that the atmosphere of fear, and the curtailments of their freedoms haven’t turned them into old people too quickly. I hope that the new year will bring more compassion, consideration of others, acceptance of other people’s points of view, and a more thoughtful and careful treatment of the natural, vital, world around us. 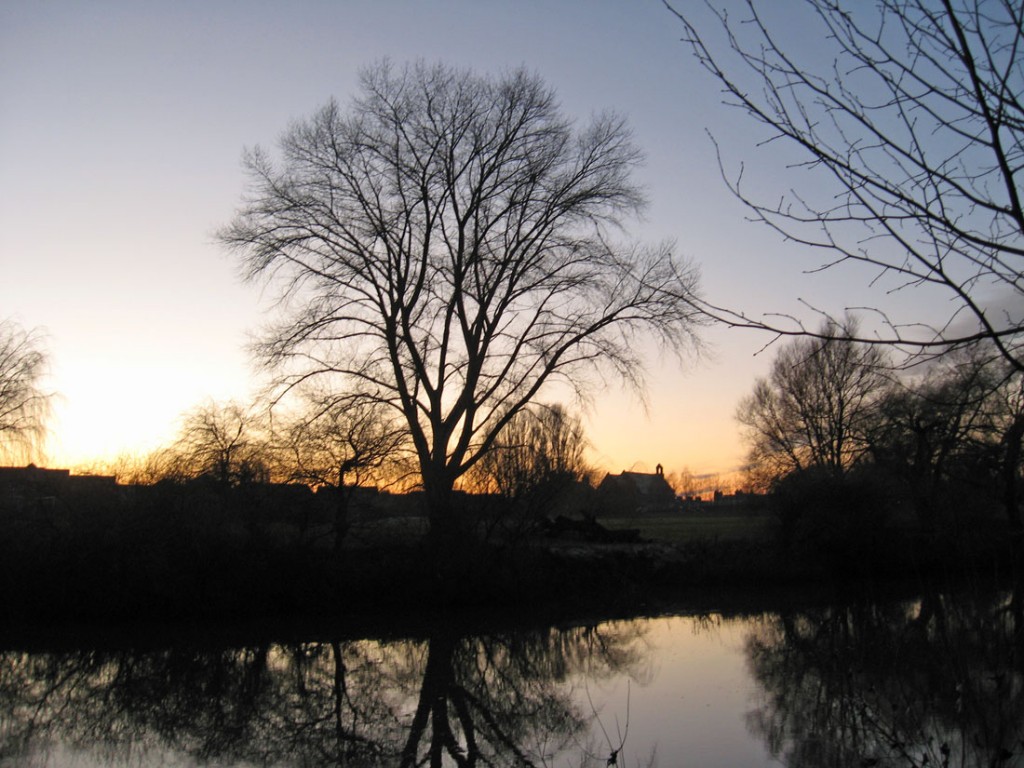