The ‘Stonebow is a listed building’ myth 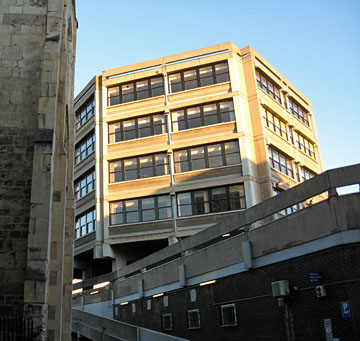 It’s a couple of years since I first saw it stated that Stonebow House (plain ‘Stonebow’ to locals) is a listed (ie protected) building.

At least, it wasn’t a few weeks back. If it is by the time you read this, do let me know.

Many people think that it’s a Poulson building. Also not true. (See update, below)

Having heard it confidently stated so many times that it is a listed building, and being unable to find any record of this anywhere, I thought it was time to check. I asked on Twitter, where I know there are experts on such matters. John Oxley, City of York council archaeologist, helpfully replied:

@YorkStories alas #Stonebow isn't listed … but it is a fine example of 60s architecture so if it survives another 25 years then who knows?

I’m hoping that anyone else searching for reliable information on this oft-stated ‘fact’ will find this page.

The myth seems to be spreading, so please tackle it if you see further evidence.

Stonebow is of course generally thought of as York’s ugliest building.

All it is is York’s most obviously ugly building. It is iconic in its ugliness. I quite like it for that. As previously discussed. Which is why I’m not going to go on about it now.

Here’s what the Esher report of the late 1960s said of it, when it was fairly new:

‘the effect … on St Saviourgate and Pavement may be cruel but there is no doubt that seen from Stonebow, without the contrast of older, gentler buildings, the effect of this deliberately brutal piece of multi-storey concrete-built development is impressive.’

The 1980 Hutchinson and Palliser guide to York calls it

Since then we’ve been calling it a monstrosity, an eyesore, etc. It normally comes top of the list when residents are asked ‘What is York’s worst eyesore‘. 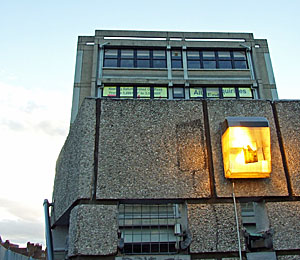 It certainly has impact. And atmosphere, if you go along that grubby bit of lane alongside it and up those concrete steps, in the evening, when no one’s around. I did so the other evening, to take some photos, but it was so horribly grim I couldn’t wait to leave. These photos are therefore a bit rubbish. There follow some links to better photos taken by other people. I’m off to look at something less grey and concretey.

A photo on flickr.com which manages to make it look quite attractive

Update: and not Poulson either

The myth is being tackled, and it was nice to see a comment on a recent Press story linking to this information above. However the comments also include another widely circulated myth that the architect Poulson designed Stonebow House. He didn’t. It was Wells, Hickman and Partners. Here’s the page from the ‘Pevsner guide’ (this book) to prove it:

Poulson was responsible for the nearby Hilary House.

By Lisa @YorkStories • 17 August 2013 Buildings
Tagged  offices, Stonebow
To link to this page's proper location please use the > permalink