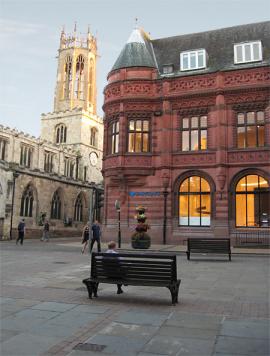 Earlier this month, one evening, I was dashing past the end of Parliament Street and noticed this new and rather beautiful view. Pleasing not only because of the way the evening light shines on the lantern tower of All Saints, Pavement, but also because of the satisfying contrast of colour and style between the ancient church and the ornate red brick and terracotta of the Barclays Bank building (dating from 1901, by Edmund Kirby).

Presumably this view was available to us in the past, before that strange little toilet block known as the Splash Palace was built. It dominated this end of Parliament Street. Since its recent demolition, this view is opened up to us again. From the corner near M&S we have pleasing architectural contrast across an open space.

Surprising to read that not everyone likes the change. A letter to The Press calls it ‘bleak and desolate’, down here at the end of Parliament Street.

There’s also a Facebook campaign to install a statue of Joseph Rowntree in this new open space. We do of course already have buildings, parks, charitable trusts, organisations and indeed the whole village of New Earswick, to remind us of the good work of Joseph and other members of the Rowntree family.

If he was here I reckon he’d say we should spend our money on looking after the living, as he did.

Your views on this view are welcome.

More on Joseph Rowntree from the excellent website of The Rowntree Society. Which includes the information that his grave is marked by a simple Quaker gravestone. I get the impression Quakers aren’t big on grand memorials to mark their achievements in life.

A video on YouTube includes a shot of this part of Parliament St (at around 1 min 22 in the film), before the ‘Splash Palace’ was built.

Lisa @YorkStories is the creator, administrator, and writer of content on www.yorkstories.co.uk. She can be contacted on this link or via Twitter, @YorkStories
View all posts by Lisa @YorkStories →
Tagged  Parliament St, Splash Palace, toilets
To link to this page's proper location please use the > permalink