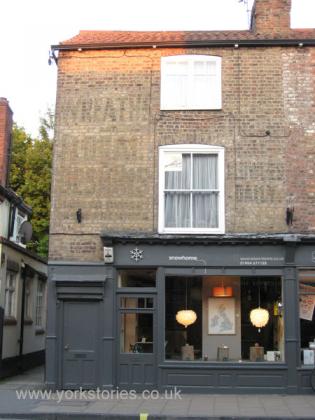 Our Bile Beans ad is a famous ‘ghost sign’ — not actually ghostly anymore since being repainted a couple of times. There are a few authentically faded ghost sign remnants around York, including this one, on Gillygate. Had you ever noticed it? I hadn’t. I was on Flickr looking for something or other and stumbled upon someone else’s photo.

How is it that we can live somewhere so long and yet miss so much. I guess we just rush about, on our way to somewhere, and it tends to be only when slowly meandering that we notice details.

Good to have captured this on camera as it soon won’t be visible at all. It’s barely legible now. ‘WREATHS’ is fairly obvious. 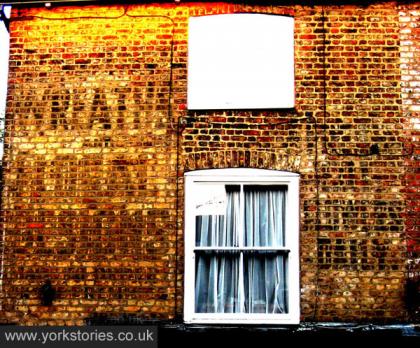 With a bit of adjustment in Photoshop other words can just be made out. On the right ‘FLOWERS DAILY’ which perhaps at one time was preceded by the word ‘fresh’. On the left, under wreaths, I think it says ‘FLORAL DESIGNS’. Staring at it for even longer I think I’m maybe inventing words that aren’t there, but underneath the block capitals that looks like two lines of smaller lettering, possibly including the word ‘premises’. What does everyone else think? (Photo can be enlarged) 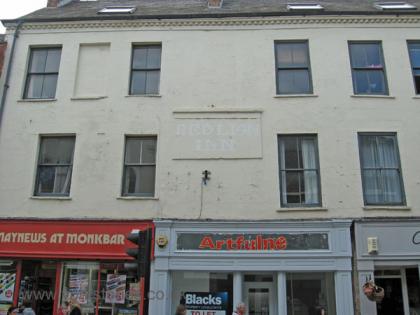 And then this, which I only noticed a couple of months ago, on the wall above shops on Goodramgate, close to Monk Bar. It’s not surprising perhaps that I didn’t see it before, as it’s not exactly prominent either, and indeed you may be wondering what you’re supposed to be looking at. 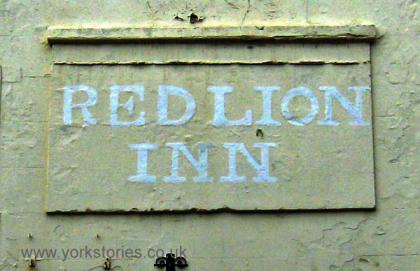 Again with the aid of digital enhancement the off-white lettering can be more clearly separated out from the off-white background: it reads ‘RED LION INN’.

Of which there is no doubt much more to say, another time perhaps.

Lisa @YorkStories is the creator, administrator, and writer of content on www.yorkstories.co.uk. She can be contacted on this link or via Twitter, @YorkStories
View all posts by Lisa @YorkStories →
Tagged  ghost signs, Gillygate, Goodramgate
To link to this page's proper location please use the > permalink