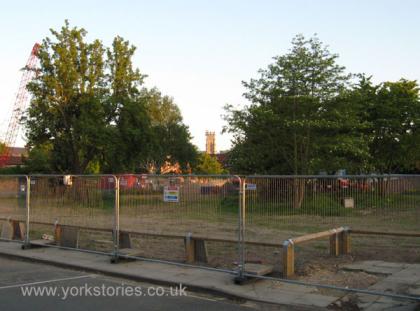 Another site revisited, catching up on developments — or rather, demolitions. Bootham Park Court was nurses’ accommodation, late 20th century and not at all architecturally inspiring. It has gone now, revealing a new view of the Minster, a bit of it at least, shining on the horizon as it catches the evening sun. For anyone walking along Bridge Lane and looking through the gateway in the wall this is a pleasant surprise. When the contractors get rid of the metal fencing it should look even better. 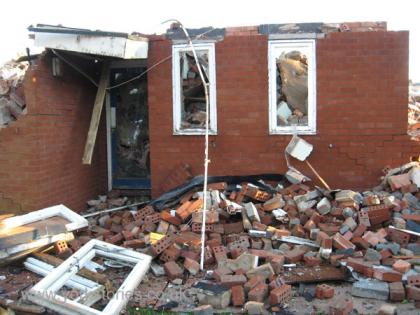 For months the site was covered with heaps of brick and metal as the blocks were demolished.

The site was I thought going to be landscaped, but at the moment still looks like a scruffy building site, a kind of unfinished place. They’ve left the trees, which is nice. Until the buildings around them had gone I didn’t realise quite how many trees there were in the garden area/courtyard.

Part of the site has been covered in tarmac for car parking purposes, and is also being used in connection with work taking place just across the lane to put large water tanks under another car park (where the crane is, visible on the photo above).

The garden area, left to grow wild after the buildings were no longer in use, was thick with vegetation. And presumably full of wildlife, any wildlife small enough to get through or fly over the surrounding railings. The long-empty ‘brownfield’ seems to support more wildlife than you might expect.

By Lisa @YorkStories • 8 June 2013 Changes
Tagged  Bootham, Bootham Park
To link to this page's proper location please use the > permalink