Ghost signs collection: beyond the walls 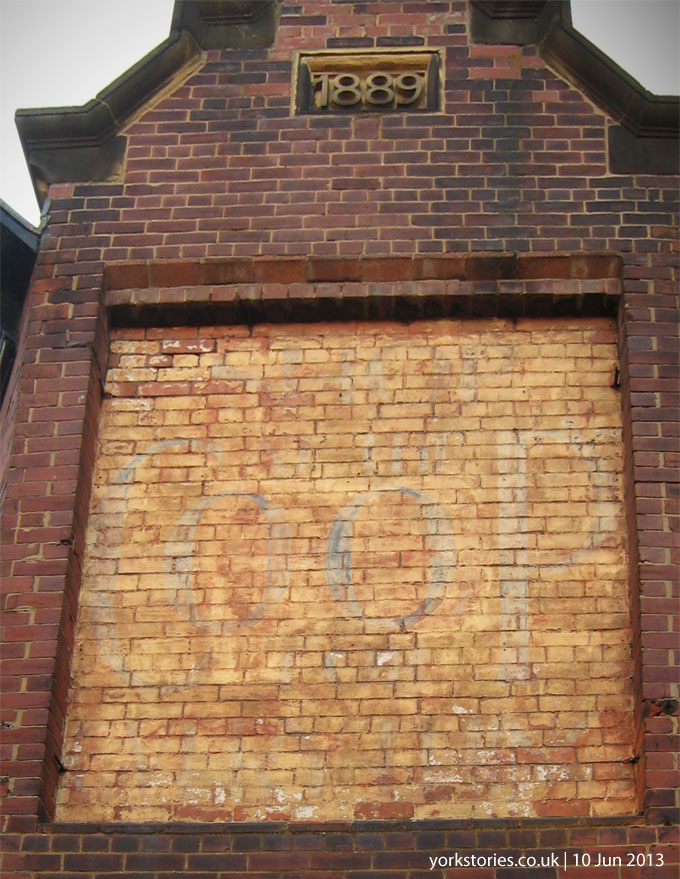 ‘Shop at the Co-op’, ghost sign. Corner of Holgate Road and the Mount

Following on from the earlier pages on ghost signs within the walls, a few ghost signs to be found outside the city walls. This one is on the corner of Holgate Road and The Mount, on a building also proudly bearing the date of its construction. I thought it just said ‘Co-op’. While applying some ‘digital enhancements’ to the image I realised that it once said ‘Shop at the Co-op’. 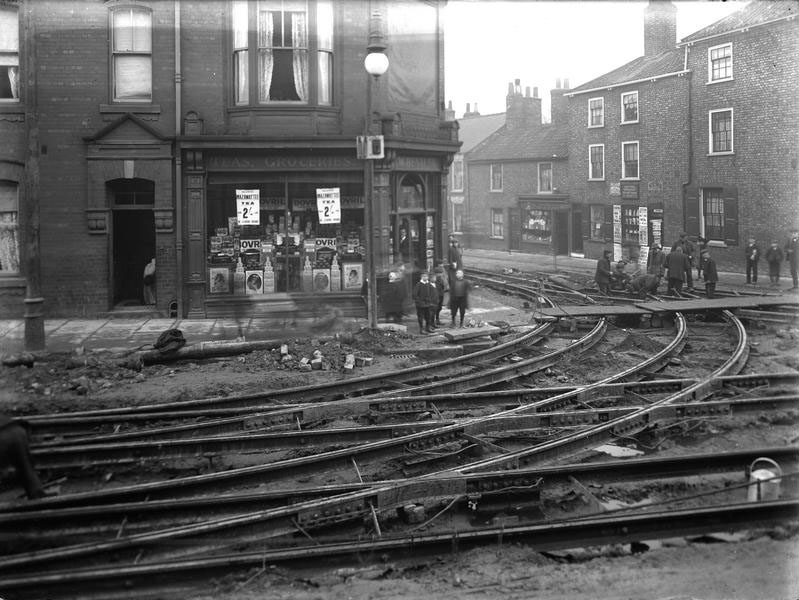 There appears to be some kind of covering on that area where the Co-op sign was later painted, and at this time, although it’s clearly a shop, it doesn’t seem to be a Co-op. I wonder if any readers remember it being a Co-op, in the 20th century? Please add a comment if you do. 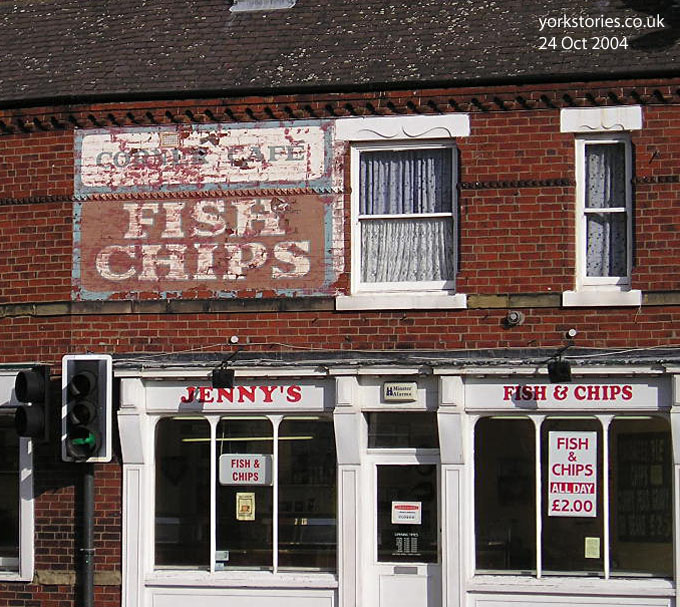 Captured in passing in 2004, and now I think covered by a plastic replacement. Fish and chips available at the Corner Cafe, just outside Walmgate Bar, on the corner of Lawrence Street and Foss Islands Road. 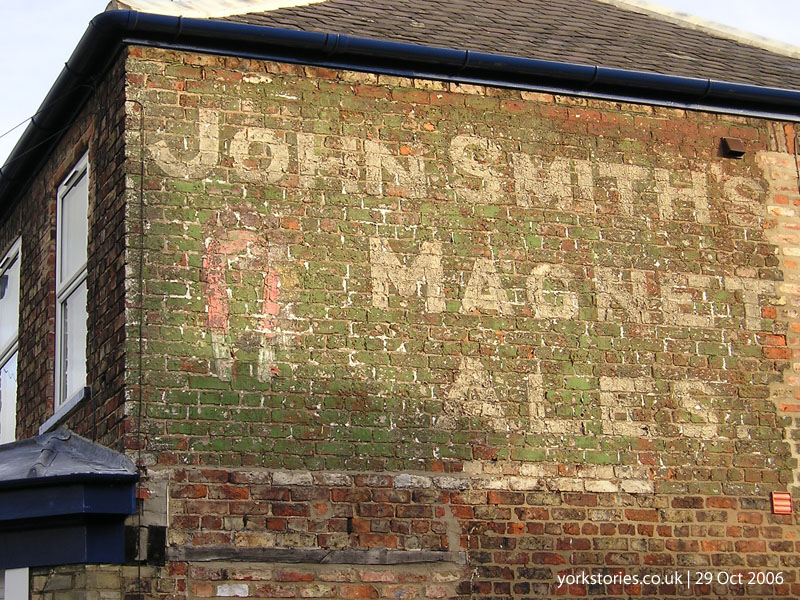 I’ve had a few emails reminding me about this one, on the same side of town, on Apollo Street just off Heslington Road. This is a larger version of the photo taken in 2006, originally included on the ‘Painted wall ads’ page, and described like this: ‘Off Heslington Road, one that hasn’t been repainted and restored, and will never be, I imagine. It advertises “JOHN SMITH’S MAGNET ALES”. I don’t know when this ad dates from, but it conjures up images of the old days when no one had thought of measuring alcohol in “units”, only in pints, and when adults weren’t being constantly nagged at about their bad habits by patronising government ministers.’ 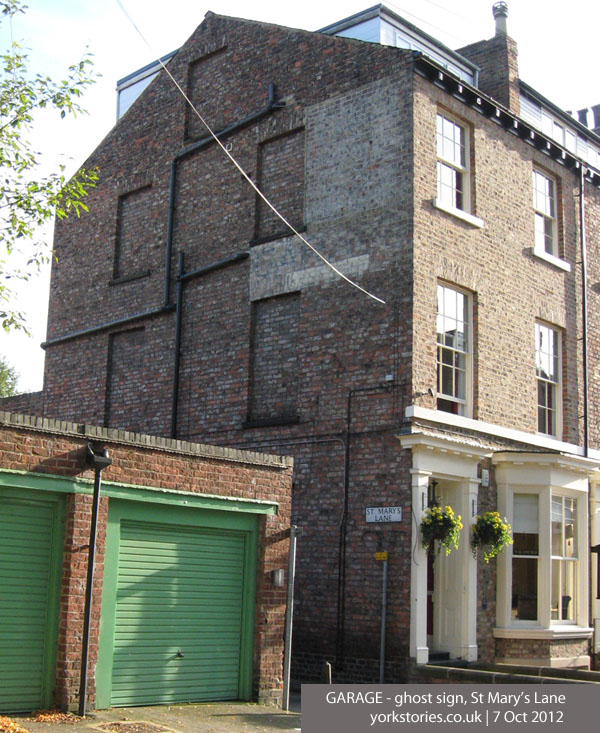 Over on the Bootham/Clifton side of town, a very faded example. It once said GARAGE, and I vaguely recall perhaps an arrow pointing down the lane to where the garage was, and I wish I’d taken a photo of it back in the late 1980s when I used to pass here often, or even in the mid-90s when I also passed often. I’m still passing often and so thought I’d take a quick photo even though there’s barely anything left of it. But it used to advertise the fact that there was a garage in St Mary’s Lane, off the street called St Mary’s. In the days when motoring was a joy and there was a friendly local car mechanic at virtually every corner, and you could buy your petrol in the city centre (on that link is a photo of another long-gone wall-painted sign, for Ankers garage on Gillygate). 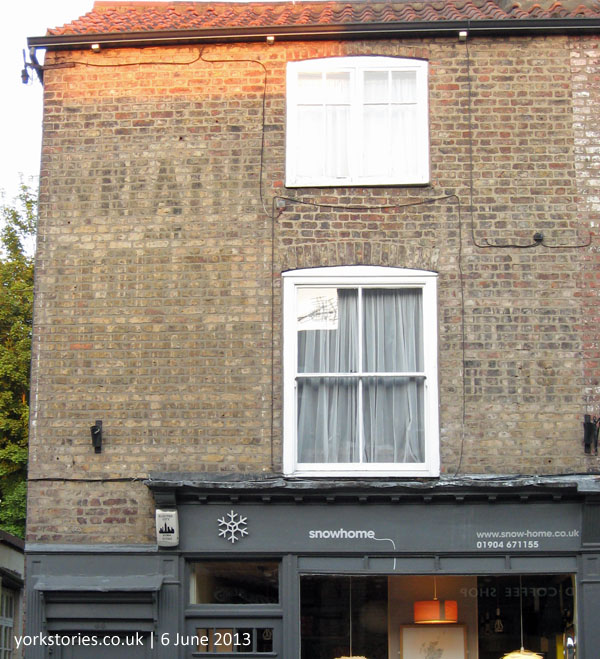 (And on Gillygate, here’s one we mentioned earlier, a faded ad for a florist’s shop.) 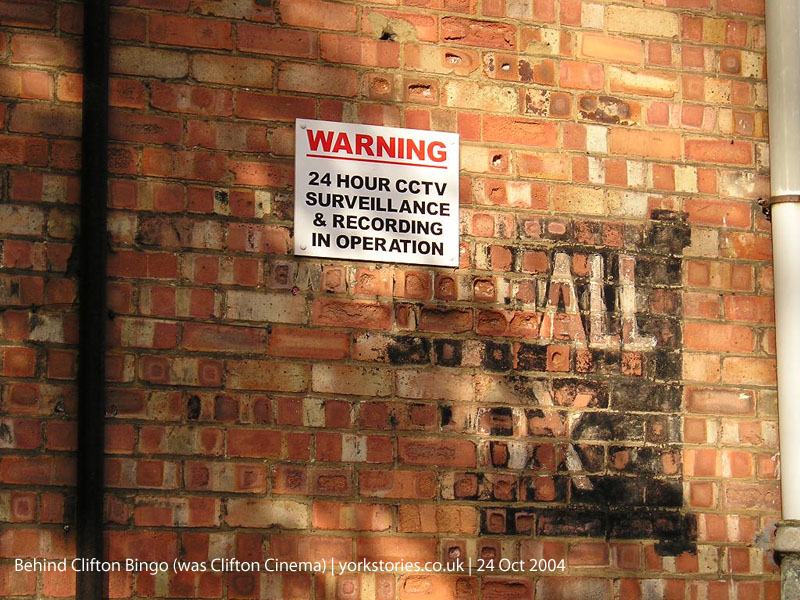 If you continue up the road, from Bootham to Clifton, you’ll pass a small cinema — or it was once, it’s now a bingo hall. Round the back, past the artwork painted this century on the wall alongside, a small remnant of this building’s previous life as a cinema. What did it say? — Guildhall Box? — something-hall box? I don’t know and won’t go any further with my guessing, after that earlier embarrassing incident with the builder’s yard I imagined called ‘Lances’, which turned out to be a depot for ambulances. 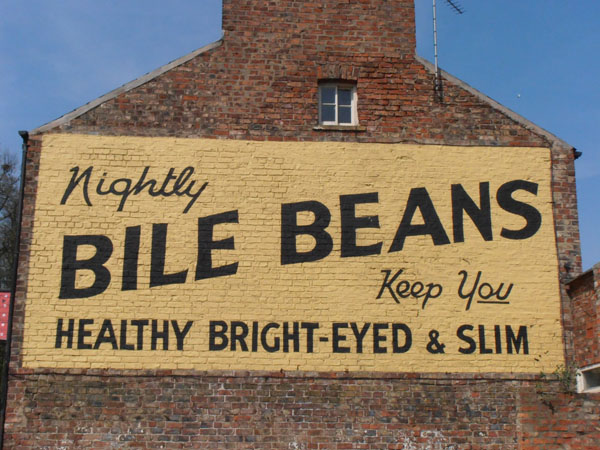 And then of course there’s this one. The famous one. Recently repainted, and covered in many pages on this site around the time of its repainting.

Michael, who sent me this photo, said he thinks the ad has a good humorous approach today. I think he’s right. The brightness of it, the name of the product, and the cheery slogan, combine to make it a jokey, quirky thing.

I have to say that I never had any particular interest in it until the repainting debate began. Which is why I guess that I can offer only this photo of it, taken in passing, from a distance (from the bar walls), at an angle, six years ago. 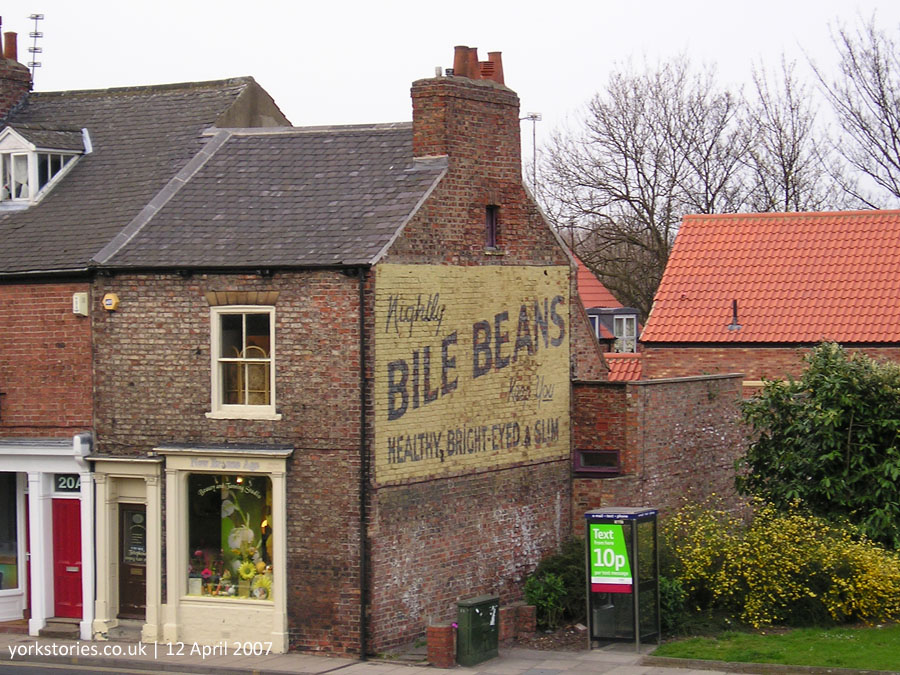 The repainting prompted debate and discussion and led to the far more interesting story of its earlier restoration. All that info is under the Bile Beans tag if you’d like to read more on York’s most famous wall-painted advert, and several other ghost signs pages also.

The Press recently ran a ‘ghost signs quiz’, and featured a few I haven’t mentioned, so you may find this of interest too. The comments under it mentioned this site, which was nice, and the last comment made me laugh — it’s worth a look, following on from the above.

And if you’d like to see a genuine old Bile Beans tin there’s an example on the BBC website.

By Lisa @YorkStories • 1 May 2014 Signs and symbols Tagged: ghost signs